Joining our G.I. Joe collection, we are proud to introduce the mysterious ninja assassin from the Arashikage clan, the Storm Shadow Sixth Scale Figure.

“The great Ninja assassin clans disappeared a hundred years ago. If they were wiped out, nobody took the credit for it and if they’re still around – who are they working for?”

With identity concealed behind a balaclava, and outfitted in a winter camouflage suit and assault vest, Snake Eyes’ blood brother comes fully equipped with an assault pack and detailed harnesses for stealth maneuvers.

Tommy Arashikage wields his weapon of choice, an impressive compound bow and arrow set, along with a few other tools of his trade, including a razor sharp katana, shuriken, and a pair of ninja tonfas.

The Sideshow Exclusive version of the Storm Shadow Sixth Scale Figure will also include a cobra head katana accessory (below). 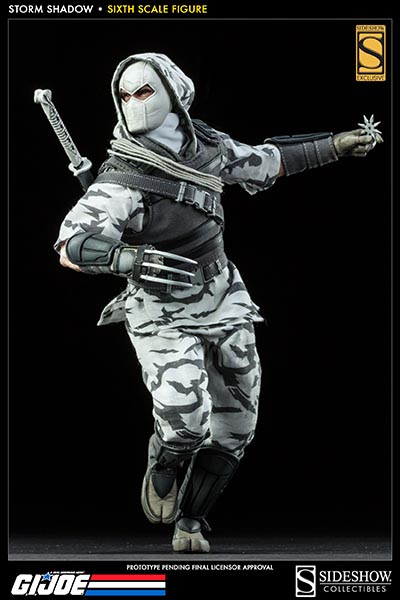 The regular and Exclusive versions of Storm Shadow Sixth Scale Figure are priced at $179.99.

Wherever his allegiance lies, Storm Shadow is always ready to strike!

This is why we love comics