Coming in at almost 40 minutes, the Battle of Helm’s Deep in The Lord of the Rings: The Two Towers is the longest on-screen battle in cinematic history. With such an impressive running time, every principle character is given multiple moments to shine.

In particular, Helm’s Deep serves as the backdrop for some of Aragorn’s most awe-inspiring and noble moments in the series. Let’s revisit five of the best quotes and concepts from this unforgettable battle.

“Then I shall die as one of them!”

Aragorn, Legolas, and Gimli survey the army that Rohan has gathered to help defend the fortress and are all left disheartened. Aragorn recognizes that many of them are not soldiers, while Gimli and Legolas note that many had seen “too many winters” or “too few.” Legolas despairs, and speaking in Elvish, tells Aragorn that given the skillset and disparity in the size of the two armies, everyone there will die.

Almost reflexively, Aragorn responds in anger that he will die as one of them if that is indeed the fate of the Rohirrim. Aragorn had already begun to step into his role as a leader prior to this, but demonstrates in this moment that in spite of his station, he thinks of himself as no more valuable than any farmer or stable boy preparing to defend Helm’s Deep.

“There is always hope.”

Aragorn sits quietly on the steps inside Helm’s Deep and notices a young man, glancing around with trepidation, unsure of himself and the battle ahead. Aragorn takes a moment to speak to him and learns that is name is Haleth, the son of Háma, one of the soldiers that had perished defending the Rohirrim refugees from the Wargs on their journey to Helm’s Deep.

Haleth confesses that he is unsure that Rohan’s defenders will survive the battle after overhearing the other men express their own hopelessness about the odds. Aragorn takes the young man’s sword, telling him that it is a good weapon. Aragorn then assures Haleth that “there is always hope.”

Aragorn recognizes that leading is not just commanding armies and rallying troops; what makes Aragorn stand out as a leader is his ability to have quiet, genuine, and meaningful moments of connection with those that follow him.

Aragorn as a Commander

Helm’s Deep is the first, but not the last, time that the audience gets to see Aragorn in the role of a military leader. When the elves Elrond sent to aid in the battle arrive, Aragorn is charged with commanding them in the battle. Aragorn, Legolas, Gimli, and the Rivendell elves take their place upon the wall as Saruman’s army closes in on Helm’s Deep. As the rain starts to fall, Aragorn gives a rousing speech in Elvish.

He tells the Rivendell troops to show no mercy to the ruthless Uruk-hai, and the battle begins. He continues to issue commands throughout the battle, leading the charge himself each time, until they are forced to retreat to the Keep.

Until this moment, viewers had seen Aragorn lead the Fellowship after Gandalf fell, and prove to be an asset as a defender during the Warg attack. During the Battle of Helm’s Deep, Aragorn shows that he is capable of leading a defense for humanity, even when the odds seem grim.

With much of Helm’s Deep overrun, the Uruk-hai begin to break through the gate to the Keep. As the remaining soldiers try to brace the gate against the onslaught, Théoden asks Aragorn to give him as much time as possible to sure up their defenses.

Aragorn and Gimli sneak outside of the walls through a hidden side door, and after tossing the dwarf to the Causeway, Aragorn leaps to join him. The two fight back to back with one another, keeping the Uruk-hai at bay.

His selflessness and courage are on full display in this moment. Aragorn never hesitates to throw himself into the fray. He does not take pleasure in battle or violence, but fights without reservation for the people he loves and the causes he believes in.

“Ride out with me. Ride out and meet them.”

Théoden despairs as the fortress is overrun. Aragorn has the women and children sent through the mountain pass to give them a head start in case the defense fails. Théoden wonders what he and the few remaining men can do “against such reckless hate.” Aragorn reminds Théoden of all the men that had given their lives to defend Rohan’s people, and tells the Rohirrim king to ride out with him.

Théoden is reinvigorated, and heartily agrees to the suggestion. Théoden, along with Aragorn, Legolas, and Théoden’s guard, charge over the causeway as Gimli sounds the horn of Helm Hammerhand. Gandalf, Éomer, and his cavalry return at this time, and Rohan claims victory over Saruman’s army.

One of Aragorn’s greatest gifts is his ability to inspire. Even when others are in their lowest moment, Aragorn can draw out their hope and courage. The greatest odds suddenly seem surmountable when Aragorn offers his wise and heartening words. Through what he says and what he does, Aragorn rallies those around him even in moments of great darkness.

Beyond being a cinematic spectacle, Helm’s Deep provides ample evidence of Aragorn’s capabilities as the future king of Gondor. It serves as a pivotal moment for Aragorn as a leader. Through quiet and personal moments, truly joining with those that he leads, and inspiring those around him simply because of who he is, Aragorn steps into his power and begins to accept his destiny in earnest.

What is your favorite moment in the Battle of Helm’s Deep? Let Your Geek Sideshow and tell us in the comments below!

If you’re looking to bring the battle home, don’t miss the Aragorn at Helm’s Deep Sixth Scale Figure, a premium Lord of the Rings collectible by Asmus Collectible Toys. 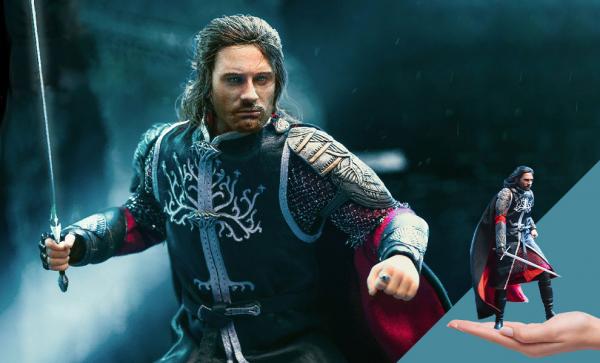