A Jedi Master™, he is. Acquired much knowledge, he has. Speaks in a peculiar way, he does. He’s none other than Yoda™, the Jedi warrior who is as agile as a Kowakian monkey-lizard™ and as wise as Bendu™. For centuries in the Star Wars™ universe, Yoda has been defending the galaxy from any who would attempt to disturb the balance of the Force. Considered one of the most powerful Jedi to have ever lived, Yoda earned a reputation among his peers for having a deep knowledge of the Force and being highly skilled with a lightsaber.

Before the demise of the Jedi, Yoda served as Grand Master of the Jedi High Council™, overseeing Jedi activities and planning their strategies. As a leader, teacher, and friend to his fellow Jedi, Yoda was held in high esteem by all who knew him.

Over the years, Yoda has made several appearances in Star Wars movies and other related shows, giving audiences a full understanding of just why Yoda is one of the most powerful beings that the Jedi Order has ever known. For those who missed the boat, here are some of Yoda’s greatest feats that demonstrate exactly why he is a force to be reckoned with.

Star Wars: Attack of the Clones™

In the early days of the Clone Wars™, Darth Tyranus™ faced off against Jedi Master Obi-Wan Kenobi™ and his apprentice, Anakin Skywalker™. Though Kenobi and Skywalker were both considered to be exceptionally skilled, their attack was sloppy and uncoordinated. In the end, their combined powers proved to be no match for the lethal expertise of Darth Tyranus, who singlehandedly dispatched the duo.

In the melee, Tyranus left Kenobi cut and bruised, and he completely severed Skywalker’s arm. But before Darth Tyranus could deal a final blow to his two adversaries, Yoda, his former master, stepped in to defend them. Tyranus first attempted to use Force lightning against Yoda, but he easily absorbed the attacks. Then, through an attack that included acrobatic jumps, flips, twists. and rapid-fire strikes, Yoda forced Tyranus to retreat.

Up to this point, audiences had only heard of Yoda’s legendary fighting skill. Now they had seen indisputable proof that Yoda was indeed a true master of combat.

Confronting His Dark Side 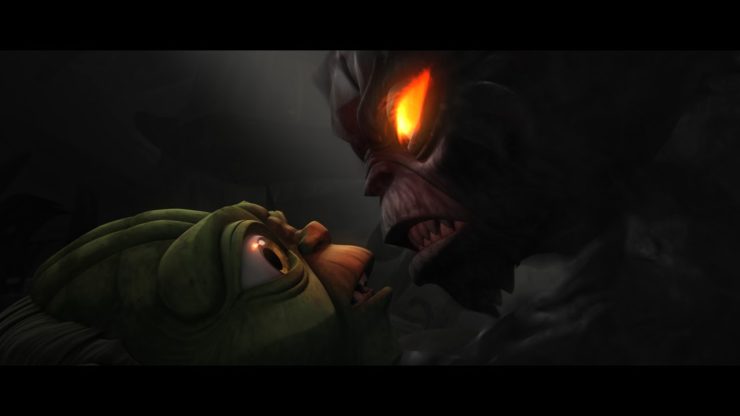 Prompted by the disembodied voice of Jedi Master Qui-Gon Jinn™, Yoda traveled to the center of the galaxy to a previously unknown planet. There, Yoda found five Force Priestesses™ who pledged to show him how to manifest himself after death — if he could prove to them that he was worthy. One of his first tests was to confront the darkness that existed within himself, something Yoda refused to acknowledge.

Yoda was sure that he had already vanquished any evil urges and that he was at peace. As Yoda resisted, the darkness became stronger. It was only when he accepted that the darkness was a part of his being that he prevailed over it. This encounter showed audiences that even though Yoda is strong and wise, there is still much to be learned about the ways of the Force.

Confronting the Spirit of Darth Bane and Entering the Sith Temple 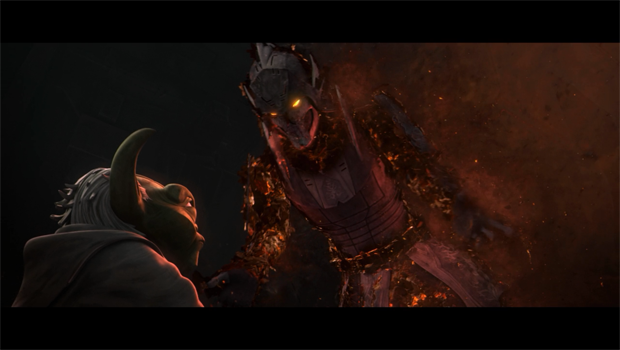 After confronting his own internal darkness, Yoda was forced to confront an external darkness that was just as fearsome: Darth Bane™ and the Sith™ temple where Bane’s spirit lingers. In his quest to unlock the secrets of the Force, Yoda was directed to travel to a planet known as Moraband™. Not only is Moraband desolate and foreboding, but it is also the homeworld of the Sith. At the entrance to a Sith temple, Yoda was confronted by the spirit of Darth Bane, one of the most fearsome and influential Sith Lords of all time.

Realizing that Darth Bane did not have the power to harm or influence him, Yoda quickly dismissed the evil spirit and entered the temple. Once inside, Yoda faced a full-on assault from the dark side. Darth Sidious™ and Darth Tyranus used the magic of the Force to observe Yoda as he moved through the Sith temple and barraged Yoda with a series of illusions and temptations that kept him off balance. In the end, Yoda triumphed, proving to the Force Priestesses once and for all that he was worthy of receiving their knowledge. Here, audiences were shown that Yoda’s true power rests in his courage and inner resolve. 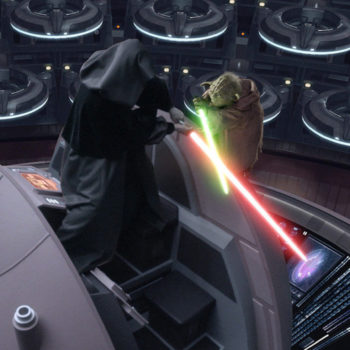 Recognizing that the Republic had been taken over by the evil Darth Sidious, Yoda set out to confront the Sith Lord and restore the galactic democracy. In the fight that ensued, Yoda employed many of the same tactics that he had successfully used in his fight against Darth Tyranus. This time, however, he had met his match. Neither lightsabers nor the Force could help Yoda defeat Darth Sidious.

Though Yoda was able to keep his adversary on his toes, he was unable to end the conflict, and their duel ended with no clear victor. Yoda considered this to be a failure because he had neither defeated the Sith Lord nor restored peace and democracy. Darth Sidious had been operating in the shadows for far too long by the time of their battle, and even Yoda’s immense power and skill could not undo all of Darth Sidious’ planning. This failure led to Yoda’s self-imposed exile on Dagobah™ and cemented the fall of the Jedi. Even so, this battle showed audiences that Yoda was an equal match for even the most powerful Sith Lord.

When Luke Skywalker™ crash-landed on the planet Dagobah, his X-Wing fighter™ slowly sank into the depths of planet’s murky swamp. It was on Dagobah that Luke first encountered Yoda, who would become his instructor in the ways of the Force and set him on the path to becoming a true Jedi. But as Luke grew in power and became more attuned to the Force, he had a sudden vision and realized that his friends were in danger in a distant part of the galaxy.

Stranded on Dagobah but desperately needing to rescue his friends, Luke attempted to use the Force to raise his ship from the swamp. Unable to do so after several attempts, Luke gave up in frustration. So, Yoda stepped in to show Luke that what he thought was impossible was quite possible for those who are strong with the Force. It was here that audiences were given another glimpse of Yoda’s immense power. 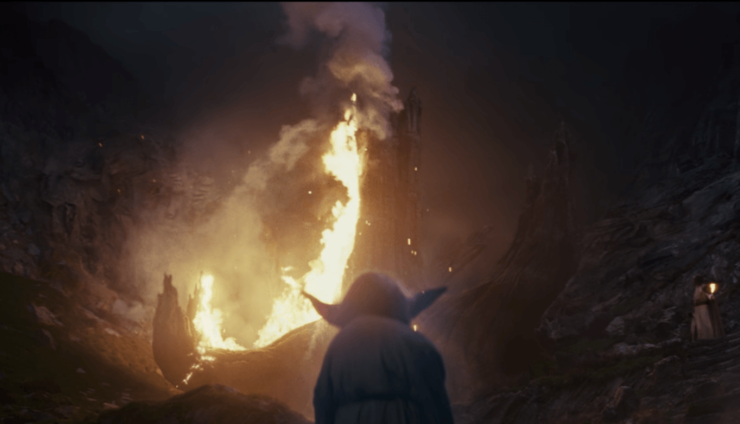 After the fall of the Empire, things had not gone well for Luke Skywalker. In the aftermath of the galactic conflict, Luke set out to train a new group of Jedi warriors. Things did not go as planned for the Jedi Master, however, and his school met an untimely demise. Discouraged and frustrated, Luke (like Yoda before him) retreated to the planet Ahch-To™, where he lived in relative isolation.

In a moment of frustration, Luke sought to put an end to the Jedi by burning a tree that contained the ancient knowledge of the Jedi Order. It was then that Yoda’s Force ghost appeared to Luke and summoned lightning to burn the tree before Luke had a chance to complete the act. It would have been impressive enough to witness Yoda conjure lighting and destroy a tree as a living Jedi; but witnessing him do it while he’s a ghost is an entirely different story. Even in death Yoda still had some tricks up his sleeve. This was the first time that audiences saw a Force ghost interact with the material world, showing that there are more mysteries of the Force to uncover.

Still judge him by his size, do you? Yoda might be small in stature, but he clearly punches well above his weight class when it comes to inner resolve and his use of the Force. Yoda was able to defeat even the most powerful enemies and overcome inner conflict and doubt to become one with the Force. He remains one of the most powerful and respected Jedi of all, and his adventures are sure to carry on for years to come.

What are your favorite Yoda moments? Keep the conversation going over at side.show/geekgroup, and don’t forget to Let Your Geek Sideshow!