What would happen if The Joker became your worst nightmare? 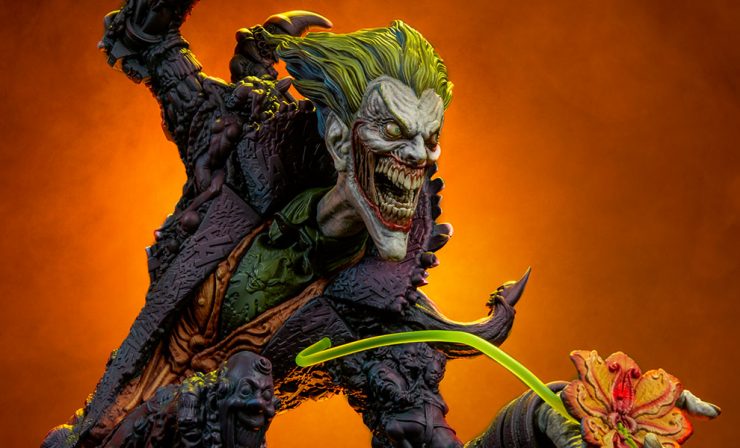 Welcome to Gotham City Nightmare- a place where fear warps heroes, twists villains, and makes your life a waking nightmare.  The Clown Prince of Crime himself is the latest addition to this ghoulish collection, showing just how evil Gotham City can truly be.

“We took the insanity of The Joker and made his entire makeup a tableau of bas-relief Easter eggs of his entire existence,” Creative Director Tom Gilliland explains, detailing the villain’s twisted, intricate sculpture.  The Joker’s entire sculpture is built of famous faces, quotes, and moments from throughout his twisted existence.

Sideshow invites you to step into the nightmare and take a closer look at some of the zany, scary, and downright insane Easter Eggs lurking in The Joker Statue from the Gotham City Nightmare collection. 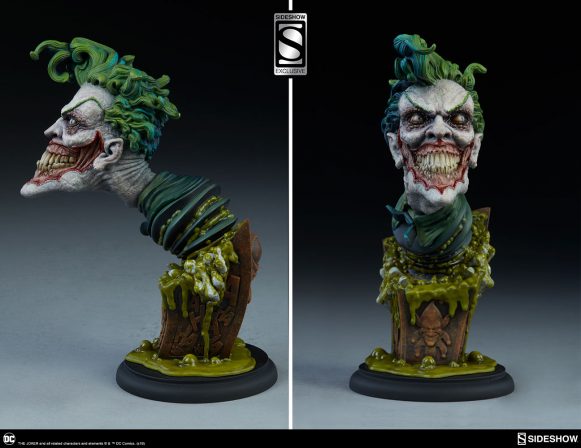 On The Joker’s Exclusive swap-out head, the portrait has terrifying teeth around his eyelids, referencing his iconic, demented grin.  Around his smile, you can see an homage to Batman‘s own logo, with winged tips and a scalloped, bat-wing design.  The head sits on a base that oozes green toxin, much like the ACE Chemicals vat that forms The Joker at the base of the statue, and the jack-in-the-box design is detailed with even more clownish faces on every side. 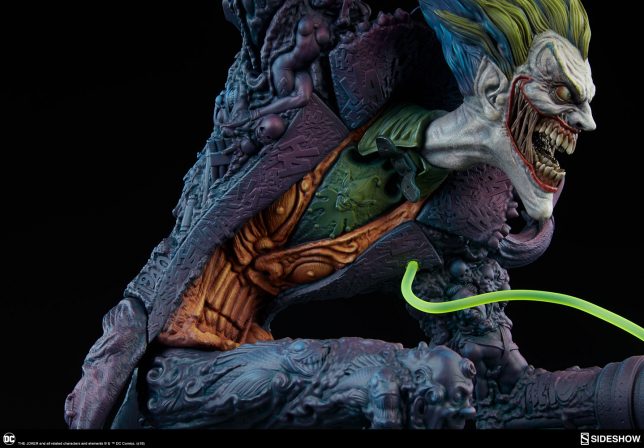 The Joker’s suit has several sculpted layers to it- on his green shirt, a classic Joker design is visible, while his orange vest takes on another version of the villain’s twisted grin.  His purple coat lapels are detailed with the famous “HaHaHa” laughter all the way down. 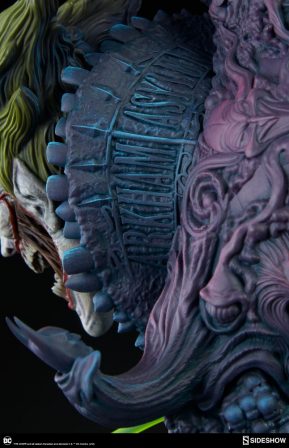 On the backside of the statue, the famed Arkham Asylum forms the backbone of The Joker’s identity- literally!  The fiend’s spinal column can be seen formed from a straitjacket, and the collars of the coat take on that same frightening quality, with belt straps holding him back from unleashing his true terror. 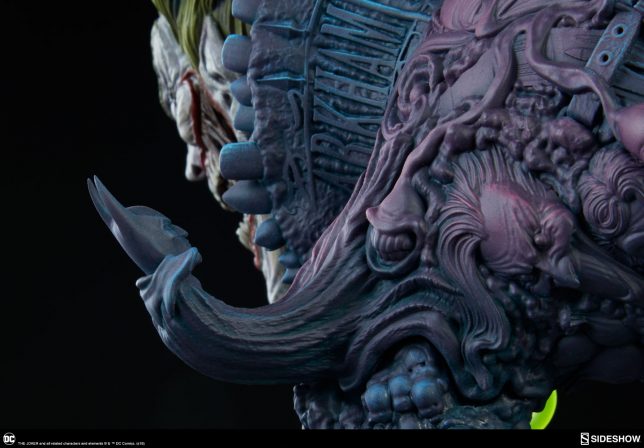 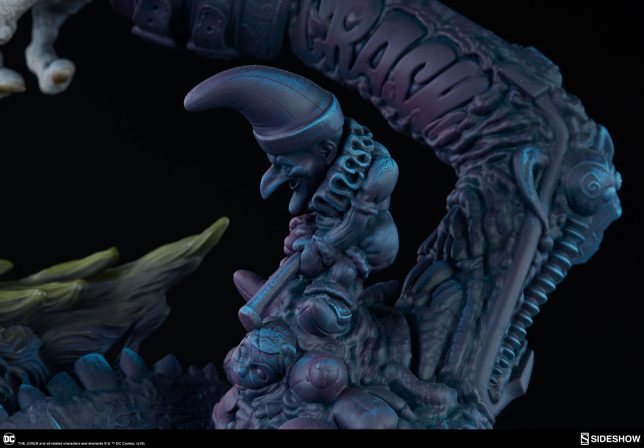 The Joker’s shoulder pads actually take the shape of little puppets- on his left, a vision of Batman, and on the right, The Joker as a Mr. Punch puppet who is bashing in a porcelain doll version of Robin.  This is a particularly gruesome reference to the famed Death in the Family storyline- where comic fans actually voted to have Jason Todd killed! 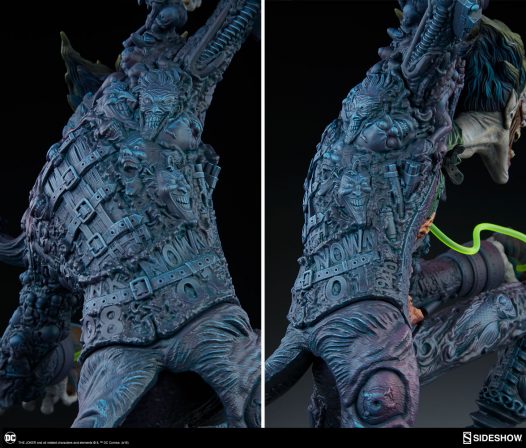 Continuing on The Joker’s back, portraits of multiple incarnations of the crazed clown can be seen, referencing the work of artists like Jim Lee, Frank Miller, Dave McKean, and more.  They gather alongside the straitjacket as reminders of the many faces he has worn throughout the years. 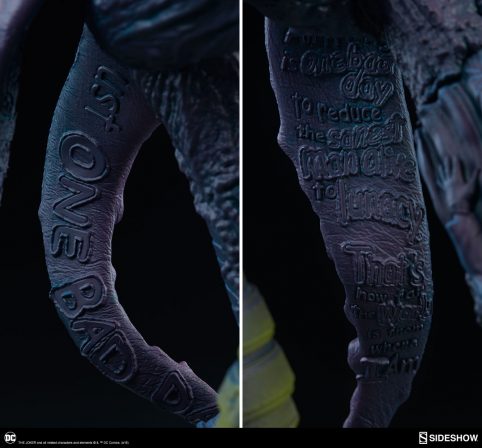 Inside the suit’s coattails, a famous quote is inscribed, detailing The Joker’s descent into madness- Just one bad day… 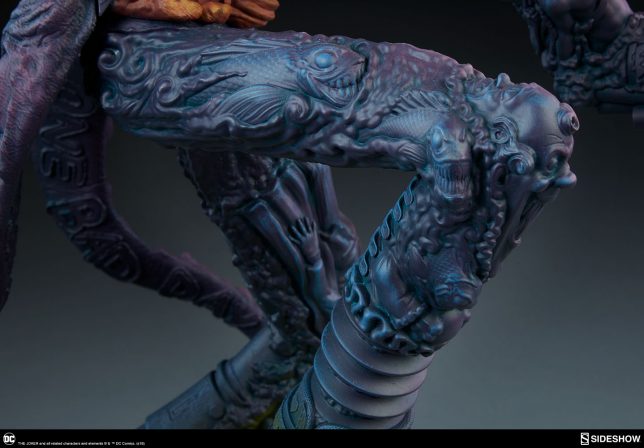 Joker Fish can be found on The Joker‘s right leg, bearing the classic twisted smile that the villain tried to copyright in the classic “The Laughing Fish” storyline. 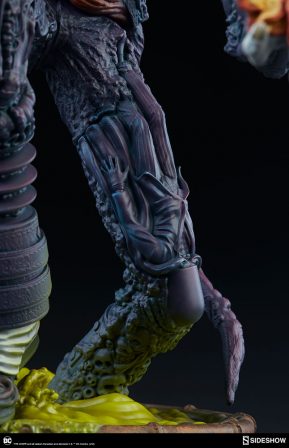 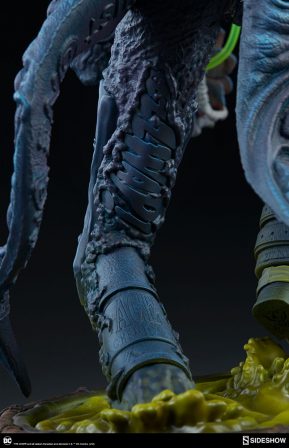 The Joker’s left leg features his Red Hood guise, sculpted in this particular pose to represent his fall into the chemical vats forming the base.  On the back of his leg, the ACE Chemicals branding is stamped into his suit calf. 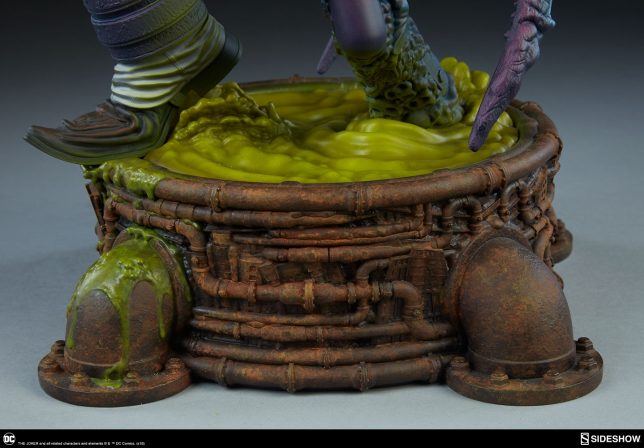 At the very base of the statue, the root of The Joker’s evil comes to light.  As he steps out of a rusty vat of chemicals, the curving pipes hide buildings of Gotham City itself, which gave rise to the villain’s twisted madness.  Gotham City is his base because it is the foundation for every evil scheme, every twisted plot that has shaped The Joker into the Gotham City Nightmare you see before you!

Now, we don’t want to give away every punchline, but The Joker Statue will keep you grinning with even more incredible references to this twisted terror’s incredible comic book history- yes, more than just the ones we mentioned here!  This piece is packed with details, and makes the ultimate tribute to the Clown Prince of Crime.  Add him to your DC collection to see every incredible detail for yourself!

Bring home the nightmare for yourself!  The Joker Statue from the Gotham City Nightmare collection is available for pre-order now! Pair him with the Batman Statue to awaken the true horror in your display of DC Comics collectibles.