Opening the Armory- Some of Batman’s Best Gadgets!

Let’s face it, no one has better gadgets or weapons than Batman. These tools are funded by his near limitless fortune, and when used in combination with his keen detective’s mind, these special items give the Dark Knight the edge he needs to face any situation. With this in mind, it’s easy to see why Batman always gets his man (or woman. ‘Sup, Sirens).

While we can’t name every toy in his toy box, below is a quick list of just some of the most standout gadgets in his arsenal. 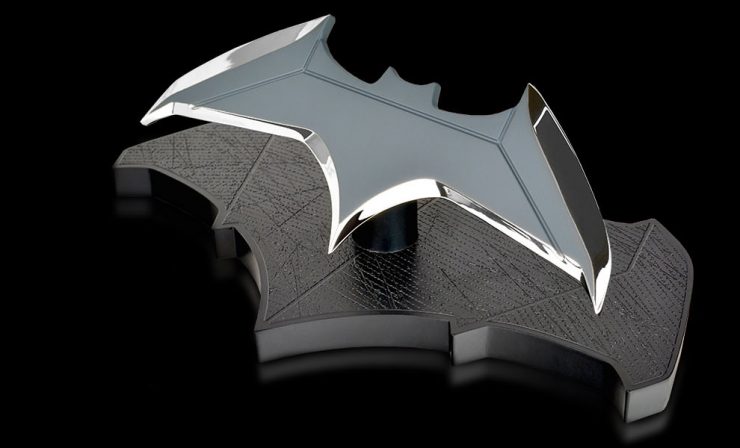 Arguably the most iconic weapon in the super-hero’s possession, the batarang is Batman’s go-to weapon when it comes to subduing and apprehending clown henchmen or mafia thugs. Starting out as just an original take on the classic boomerang, the batarang has evolved over the years to become a multipurpose weapon. There are now exploding batarangs, remote-controlled batarangs, magnetic batarangs for fighting robots, electrified batarangs that stun their target, and many, many more.

In some more modern interpretations, the batarang has become less of a boomerang gadget and more of a throwing shuriken, but even so, you won’t see Batman leaving his cave without some version of his trusted projectile at his side.

While Batman has always used a grappling hook in some form throughout his 78 years of crime fighting, the grappling gun didn’t make its first appearance until the 1980s. Since then it has become a requisite item in the Caped Crusader’s toolkit, making appearances in every film post 1989.

Used to swing around the Gotham skyline, and change vertical elevations in no time flat, the grappling gun can be used for a quick shortcut or a speedy exit. There is also a variation called the line launcher, which Batman can use to zip-line quickly from one place to another horizontally.

The envy of heroes and bane of villains everywhere is Batman’s utility belt. It’s a gadget that holds other gadgets! Smoke bombs, tear gas pellets, torches (both flashlight and welding), tiny explosives, batcuffs, and just about anything else you can think of can resides in those plentiful pouches. It even has a spot for the above mentioned batarangs and grappling gun.

Also, Batman isn’t called the “World’s Greatest Detective” for nothing. Like any great detective, when the clues lead to a dead end, he breaks out the science! Batman’s belt contains a forensic kit small enough to fit in one of the belt pouches. It does everything a CSI kit can do, but better… because he’s Batman.

Taken from the collection of Lex Luthor, the Kryptonite ring came into Batman’s possession because the Dark Knight spends all his waking moments conceiving every possible threat he might encounter. (Yes, even that one. And that one. That one too…)

And when you have an alien being on your planet that is more powerful than a locomotive and able to leap tall buildings in a single bound, you have to take into consideration that maybe one day said alien may no longer believe in truth, justice, and the American way.

Not a fun thing to think about, but if you are Batman, you need to be prepared just in case.

You laugh, but if you had a villain called The Penguin, who habitually uses marine life and exploding sharks in his nefarious schemes, you’d be thankful to have a can of Bat Shark Repellent in your utility belt too.

Need a hand in completing your own utility belt? Check out this amazing replica of Batman’s batarang that you can take home today!

And for more collectibles straight from Gotham City, check out the awesome selection of Batman’s allies and villains available right HERE at Sideshow!