Death is the anti-hero at the heart of the Court of the Dead® universe. He is the creator and leader of the Underworld, the land of the dead. Can Death lead his legion of mourners to rise up and stop the war between Heaven and Hell? Learn more about this haunted protagonist, and the intimate details driving the design of his incredible Premium Format™ Figure in this Q&A with Tom Gilliland, creator of the Court of the Dead® and Chief Creative Officer at Sideshow.

Who is Death? Why did you choose him to be the protagonist in the Court of the Dead?

The Court of the Dead® is a dark fantasy parable about power: Its temptation to corrupt, and how absolute power corrupts absolutely. And what force in the universe is more powerful than Death? And so I made Death – or, as he prefers to be called, the Alltaker – the anti-hero at the core of the Court of the Dead® universe.

I’ve always been drawn to characters that find themselves as much at odds with themselves as they are their natural opponents. Death is desperately trying to overcome the temptation to indulge his massive power to destroy. This is no easy endeavor, because he is tasked with reaping souls and feeding them to Heaven and Hell. The Court of the Dead® world is woefully out of balance: The twin celestial realms of Heaven and Hell have been subverted by a corruptive lust for power, and the drive to destroy each other. Compelled by the plight of the mortals that pass through his realm, the Alltaker has found himself fighting his own dark nature. He sees the opportunity to save both his world and Mortal Realm, by ending the war between Heaven and Hell and redirecting how souls cycle through the universe. The Court of the Dead® has provided me with a rich platform to explore the anti-hero mythology that has followed me throughout my life – from Sergio Leone westerns to Batman™ as the Dark Knight, and beyond. 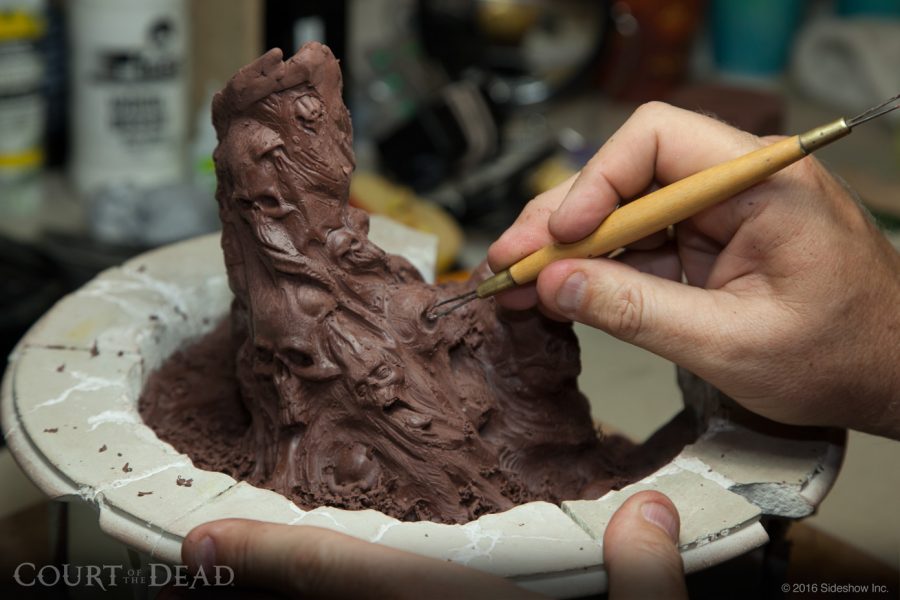 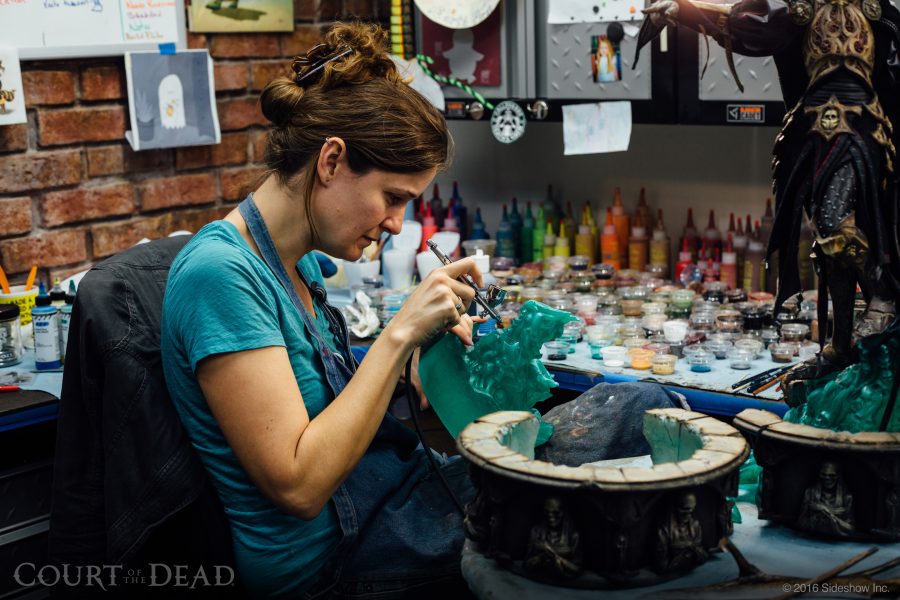 I’m also compelled by the artistic balance between the beautiful and the horrible; this dichotomy makes things whole and genuine. The Alltaker’s portrayal in this Premium Format ™ figure was to explore both the humanity of a character that is commonly assigned superficially horrific traits. In the Court of the Dead®, Death is not a force of evil, rather a demi-god caught between his guilt over his complicity in a process he knows to be wrong and seeks to right, but thwarted by the knowledge that to draw on his full power to stop this process would ultimately push him over the edge into his destructive nature… ruining all the nobility for which he strives. Making decisions for good that are easy isn’t as interesting to me as being faced with challenges amidst the gray zone of the chaos – which is more often what reality is like.

The Alltaker’s journey in the Court of the Dead® is a needle threading moral peril and personal conviction in the face of improbability. Will he be able to shed the shackles of his destructive nature and reach beyond his origin, or will he fall to the seductive allure of power that has so far ruined all that have tried before him? I think this challenge is something we can all relate to in one form or another.

What is the message of the figure’s pose?

The Alltaker is as much “grim reaper” as he is a “sage wizard,” and it was this dual aspect of the character that we sought to capture with this Premium Format ™ figure. Most interpretations of Death show him pointing at you as a dire omen of your imminent destruction, but in this figure the Alltaker summons you to join his crusade, and find your own place in the spirit world. This pose is unapologetic of its both beatific and horrific reality: Death is an ending, but it can also be a new beginning. Overall the piece combines elements of both “threat” and “promise.”

What do his clothes signify?

Death’s apparel represents the state of his achievement in thwarting his dark nature, and harnessing it to serve his benevolent purpose. Long past are the wraith-like, chaotic shrouds that once were his visage. The Alltaker now dons clothing with both structure and form that create a sense of self-control or mastery of his perilous place in the universe.

Additionally, he wears the Underworld United crest prominently, ever representing his goal of unity in the face of adversity, for both himself and his entire Court of the Dead®. 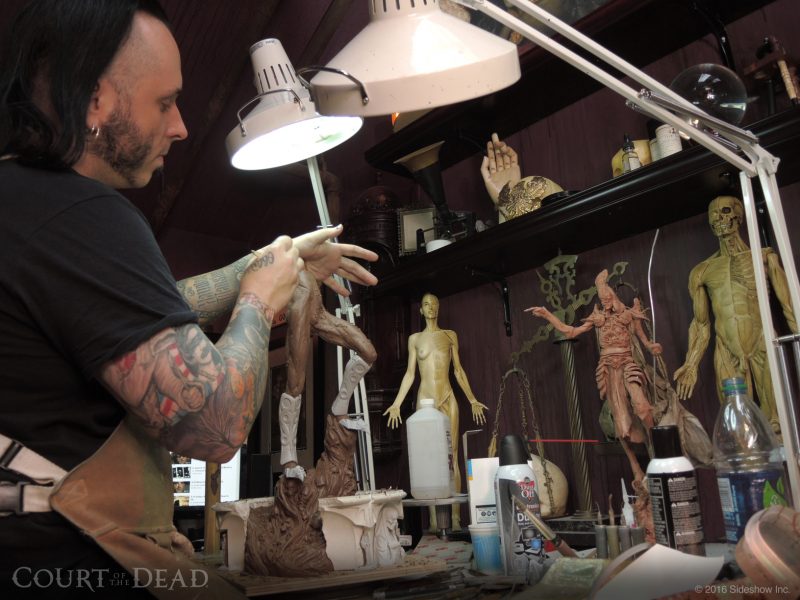 Why does Death wear a mask?

Death is the lost orphan son of the originators of Heaven and Hell. He grew up absent the council of his parents, and thus he has sought to define himself through nothing but his own experiences. His true appearance is shrouded from the viewer by a mask, but through this ever-evolving collection of “faces” he has sought to create the identity that feels most comforting and genuine.

What do Death’s different masks mean?

Each mask is a reflection of the Alltaker himself, as he can best capture it at the time of each mask’s making. Some masks present his station as Dark Shepherd, while others explore the conflicted collage of beings he struggles to define himself amidst.  They are as plentiful as our own interpretations of ourselves. 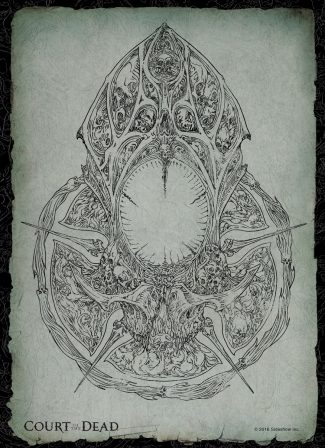 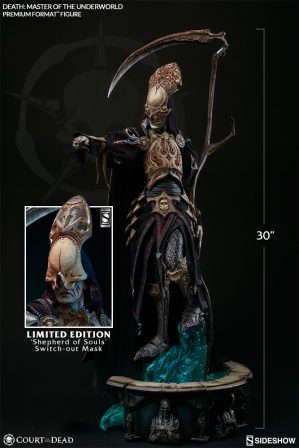 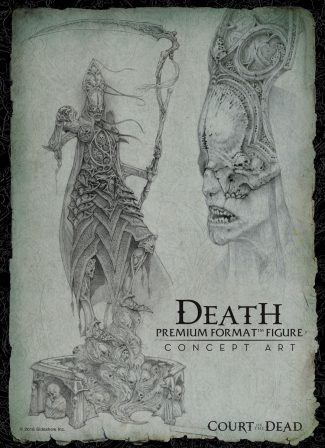 Court of the Dead Death