Who else out there is counting down the days until Game of Thrones returns?

From the creative mind of George R.R. Martin, the first three seasons of the epic HBO fantasy drama, based on his book series A Song of Ice and Fire, have marked some of the highest rated television of recent years. Centered around the families and political figures of a fictional world called Westeros, we’ve been on the edge of our seats as each character is entangled in a web of war or cunning to gain power and ultimately, a seat on the Iron Throne.

In the grand tradition of twists and turns, we’re proud to say that Sideshow’s artists played a special role in the limited edition Game of Thrones Complete Third Season on Blu-ray, in which the Lannisters are barely holding onto power, and reunited with her dragons across the Narrow Sea, Daenerys Targaryen attempts to raise an army to sail in hopes of eventually claiming the Throne. 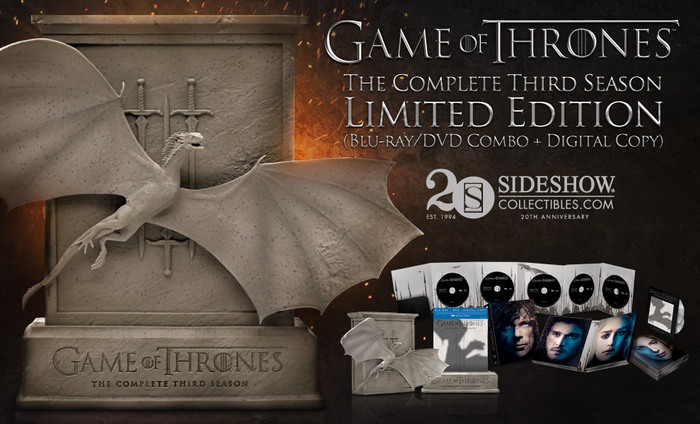 Working with the digital models straight from the creators of the show, our artists designed the case digitally and then finished it by hand with a weathered look evoking the feel of Westeros and a bygone era.

Of course the ‘Mother of Dragons’ is well represented. Reminiscent of the third season poster art, Daenerys’ dragon takes center stage with an impressive 3d wingspan and tail, which wraps around the core of the packaging. Fans will delight to find the back engraved with Dracarys, a word from the Valyrian language playing homage to wildfires and dragons.

For fans of HBO’s Game of Thrones series, this limited edition gift set with collectible packaging is a must have!

More happening on Geonosis, than has been revealed...