Of all the Marvel super heroes, you’d be hard-pressed to find a person more irreverent, more vulgar, and more downright hilarious than Deadpool. Over the years, he has terrorized Spider-Man and Wolverine with his affections. He has broken the fourth wall more than most comics figures. And he has saved the day many a time, but his sanity? Beyond saving.

Deadpool was released in 2016 and its sequel, Deadpool 2, in 2018. Throughout both films, there’s no stopping Wade Wilson’s wisecracking. Up ahead you’ll find some of his finest quips and cracks — except for the ones about a certain other comics-based multiverse, those are off limits, silly. Get ready to laugh your assassin off.

“McAvoy or Stewart? These timelines are so confusing.”

By this point in Deadpool, Wade has already made many allusions to the X-Men but those ones would have definitely been on the naughty list — and you Sideshow fans are too classy for that. So we’re startin’ here, with one of Deadpool’s many jabs at the confused selection of Marvel super hero content back in the day. The X-Men’s fearless leader, Professor X, was played by both James McAvoy and Patrick Stewart in the various films spanning nearly two decades.

Of course, now the timelines are officially messed up thanks to Loki and Doctor Strange and Peter Parker. Deadpool is gonna have a field day whenever he enters the MCU.

“It’s almost like the studio couldn’t afford another X-Man.”

When Deadpool pulls up to Xavier’s school, Negasonic Teenage Warhead answers the door. She and Deadpool exchange their usual sassy banter, with Deadpool noting that he has only seen her and Colossus so far. He can’t help but wonder — where’s everybody else? Budgets and studio contracts are no joke, people.

Right before Angel Dust prepares to confront Deadpool, Colossus, and Negasonic Teenage Warhead, Deadpool gets excited for the villain’s landing. He knows they’re “totally impractical” but you gotta love a good super hero pose. You know Yelena Belova does.

As Negasonic Teenage Warhead prepares to use her powers during battle, Deadpool offers her a quick word of encouragement. If his phrase sounds familiar, it’s because this is a saying often used in Spider-Man media, especially by Mary Jane Watson.

“Til next time, this is your friendly neighborhood pool guy singin’ ‘I’m never gonna dance again, the way I danced with you…’”

If there’s one person that Deadpool loves more than Vanessa, it’s Spidey. And as he prepares to sign off before the end credits, Deadpool gives another not-so-careless nod to the friendly neighborhood hero.

“Give me a bow and arrow, I’m basically Hawkeye.”

It’s not out of the ordinary to see someone poking fun at Hawkeye. After all, in a world of cosmic gods, super soldiers, and human mutates, how intimidating is a guy who’s good at archery? As always, Deadpool’s powers of observation are second to none. He’s not afraid to call ’em like he sees ’em, especially when it comes to his fellow heroes. Sorry, Clint.

“What did I do to piss off a grumpy old f**ker with a Winter Soldier arm?” 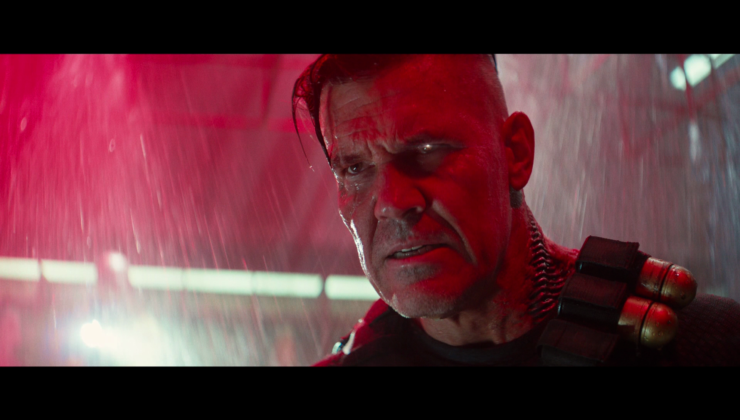 Two for one deal! Deadpool has always had a soft spot for Cable, the mercenary from the future who is a present to us all. Two mercenaries walk into a bar and … well, you’ve seen these two together. Sparks are bound to fly from that big gun of Cable’s.

Even in the face of a massively unstoppable super-villain, Deadpool’s mouth is running. When Juggernaut appears, Wade can’t help but fangirl over the classic X-Men enemy. He lists off some of his favorite Juggernaut appearances in the comics but, unfortunately, flattery only gets Deadpool flattened by the crimson criminal.

You might have noticed that Deadpool has a bit of an aversion to anything green, and let’s just say it’s not because red and green are opposites. However, Deadpool does love a clever allusion, as seen here when he attempts to soothe Juggernaut with Black Widow’s old lullaby for the big green dude. Unlike Hulk, however, Juggernaut is never sleepy.

In the type of franchise-crossing joke that only Deadpool is legally allowed to pull off, he calls Cable “Thanos” just before the final showdown in Deadpool 2. Of course, audiences know that actor Josh Brolin played both Nathan Summers and the Mad Titan. But for Deadpool, this is just another golden opportunity to break down that flimsy fourth wall.

If you’re looking to get schooled on comebacks and wisecracks, Deadpool is your best shot. He was educated, after all, in the esteemed halls of Sister Margaret’s School for Wayward Girls. No better education than that.

If you’ve made it this far, you might as well go back and watch both movies. Make it a marathon, order some chimichangas, do it nice. And a Happy April Fool’s Day to all.

Tell us your favorite Wade Wilson joke in the comments and don’t forget to Let Your Geek Sideshow!