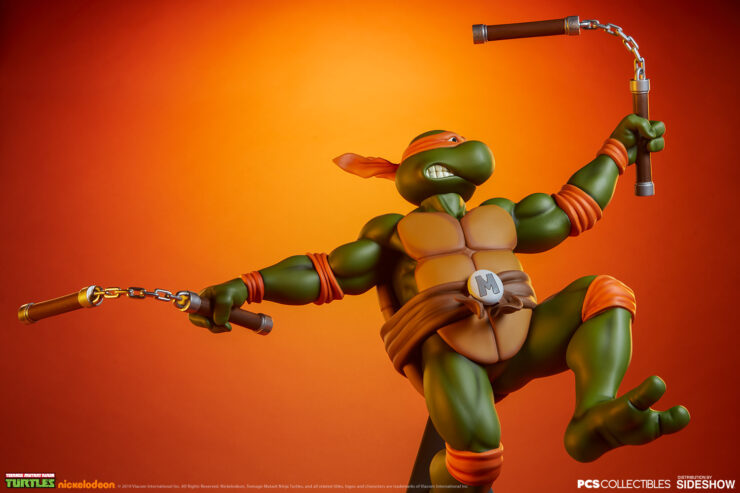 Michelangelo is the nunchuck wielding, pizza loving, joke-cracking Teenage Mutant Ninja Turtle. Why is he a fan-favorite? Maybe because he knows exactly how much the rest of us want to eat pizza all the time.

The chill turtle bro made waves in pop culture with all of his wonderful catchphrases and quotes, so here are just a few of Mikey’s best.

In some of the early TMNT cartoons, Mikey was just a quick and clever. He always had catchy phrases and quips to sling at the bad guys.

And his message is pretty clear: you don’t mess with the Teenage Mutant Ninja Turtles because they are not gonna cower in their shells. They’re coming out with their katanas and kicks a’blazin’!

“Gotham is bonkers, yo!”

There have been many crossovers between the Teenage Mutant Ninja Turtles and other stories. Most commonly, there have been crossovers with Batman. It might seem strange for mutant turtles to be in the city of Gotham, but then again, you already have Killer Croc in the sewers, so it’s not all that different!

Of all the ninja weapons and unique fighting techniques that the Teenage Mutant Ninja Turtles know, there’s no place quite like Gotham to show them off. The Penguin’s umbrella is a gun, and a sword, and a convenient getaway? Mikey might just love that little guy.

One delectable slice of pizza is absolutely out of this world. When Mikey takes just one bite, his world is changed, his mind is blown, and he’s practically in love. His first bite was slow and deliberate, as he savors every flavor of the delectable dinner.

Then he can’t help himself and he scarfs it down in a heartbeat. The only thing that’s left is to convince his brothers that they won’t like it. That way he can eat it all!

“There comes a time, brothers, where history is forged like melted cheese… it sticks together as one, but it’s still soft and squishy in the middle… mmm… are you with me?!”

Michelangelo isn’t usually the inspirational speaker of the group, but he took it upon himself the rise to the challenge! No matter how rough things are for the brothers, they’re each there to support each other however they can.

And when the rest of the team was feeling down, Mikey found the strength in his little turtle shell to speak up and get the team ready for a fight. He was only a little distracted by food on the way!

“Oh yeah, Mr. Spikey Pants? Well, you’re the one who should be saying… farewell… to… uh… yourself!”

Shredder is most certainly the Teenage Mutant Ninja Turtles‘ greatest and most dangerous enemy. Perhaps it’s his control over the international (and sometimes even interdimensional) villains that makes him so dangerous.

When he finally thinks he has the brothers cornered he says, “Say farewell to each other, while you still can.” Mikey comes back with the best quip he can think of. To be fair, not all of ’em can be winners.

“The enemy of my enemy is my bro!”

Master Splinter always has sage advice for the team, and they each have grown as ninjas, brothers, and turtles because of it. Usually, he is the final voice of wisdom that guides their righteous hand.

Michelangelo does his best to pass on his master’s wisdom, and impart the advice to his team. It’s not exactly what Splinter says, give or take a few words, but he gets the point across!

One of the most entertaining and hilarious moments were the 4th wall breaks. And Michelangelo seemed to understand the audience best.

He knew how we felt about pizza, parties, and takin’ it easy. But when things got real deep and philosophical, he was there to bring us back into the moment with a bit of a laugh.

Mikey’s jokes can be hit or miss, but this one? Oh this one hits hard, right upside Raphael’s face.

It’s funny to see how the brothers all joke with each other, sometimes with playful jests. No matter what, through all the jokes and jeers, they fight side by side as family. Plus, come on, that’s just hilarious.

“Ah! So, there’s always one guy in the monster movie that freaks out ’cause he can’t take the pressure and I’m going to do an impression of him right now. And it goes something like this… GET ME OUT OF HERE!”

Michelangelo always makes the best pop culture references. He wants to be a part of the world, maybe even more than the other ninja turtles. And because of that, he knows all our favorite movies, heroes, and character tropes.

This joke is almost like a 4th wall break of its own, but better. He won’t admit to being scared, but he can certainly admit to watching a good monster movie.

The TMNT are always sharing their team battle cries, and while this might not be Mikey’s original catchphrase, it’s still a memorable one.

It’s a celebratory shout that emphasizes victory and honoring the moment, which is perfect for our favorite turtle brothers as they take down the bad guys and still have time to catch a slice of pizza before the day is done.

What’s your favorite quote from Michelangelo? And which Teenage Mutant Ninja Turtle should we quote next? Let us know in the comments, and don’t forget to Let Your Geek Sideshow!

Career Geeks: An Interview with Sideshow Collectors at NASA