Since its inception, the JSA has gone through numerous reformations and it still continues to exist today. Thanks to a multitude of Crisis events, some JSA members even fight alongside JLA heroes. Let’s dive into the JSA’s history (and how it relates to Black Adam himself) ahead of Black Adam’s release. 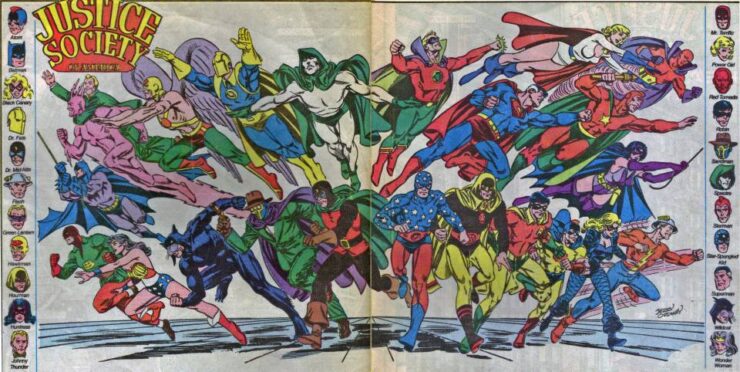 As with any super hero team, the JSA has had many different lineups. It all started during WWII. The Flash (Jay Garrick) and Green Lantern (Alan Scott) were sent to Europe in an attempt to stop Hitler’s forces. When their combined power wasn’t enough, they were joined by Doctor Fate as well as Hawkman, Atom, Hourman, the Sandman, and the Spectre. Later, other well-known heroes such as Starman, Doctor Mid-Nite, Black Canary, Hawkgirl and Power Girl, among others, would also enter the JSA.

Though they were hailed as heroes, eventually the JSA’s time ended. During the Red Scare, the Justice Society was accused of communism. Rather than give up their secret identities to the court, they disbanded. Fortunately, in 1963, Barry Allen would reunite with the first Flash and the Justice Society was reinstated. They even received their own new comic series, All-Star Comics.

This new Justice Society served as allies to the Justice League as well as an important home to legacy heroes. During Crisis on Infinite Earths, the original members of the JSA were designated to Earth-Two and later brought to Prime Earth in a convergence of realities. Even with the convoluted Crisis storylines, the Justice Society remained a pillar of strength among DC heroes. The team would become a place for established heroes and new heroes to find their footing. 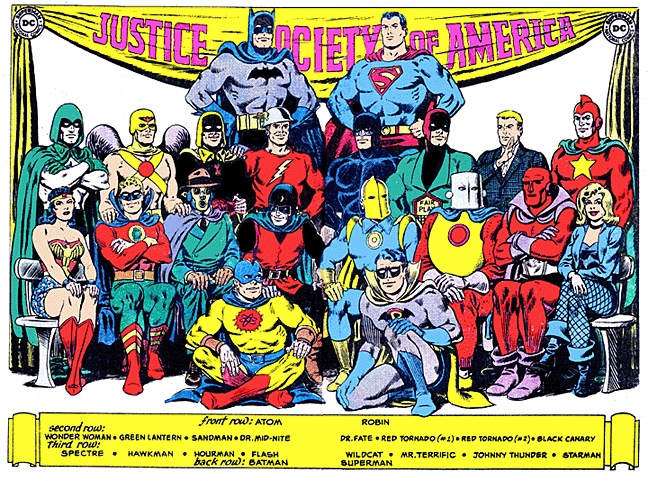 *Atom-Smasher is a former vigilante who has sided with Black Adam in the past, especially when it comes to political turmoil in Kahndaq. They were both part of the Black Reign Group.

Due to various Crisis events and alternate Earths, prominent Justice League heroes have also worked with the Justice Society. Versions of Superman, Batman, and Wonder Woman as well as Robin and Huntress have joined the JSA. But perhaps the most chaotic member of the Justice Society is Black Adam.

Black Adam and the JSA Black Adam is primarily known as a villain. He’s the shunned member of the Marvel Family, the mistake of Shazam. Of all his enemies, Black Adam probably hates Superman and Captain Marvel the most. At one point, he even joined Sinestro as a member of the Yellow Lantern Corps. On the other hand, he has also assisted the Justice Society and the Justice League on occasion.

Despite his violent methods, Black Adam’s motivation is fueled by his family and his home, Kahndaq. When either of those is threatened, Adam’s rage is ignited. Black Adam once tried to have a family like Captain Marvel, calling it the Black Marvel Family. His wife Isis, AKA Adrianna Tomaz, and her brother Amon Tomaz (Osiris), were the principal members besides Adam. He and Isis had rescued Amon from an Intergang prison camp. Everything unraveled when Amanda Waller intervened. She used the Suicide Squad to trick Osiris into murdering the Persuader. With Waller’s scheming and the rising power of Intergang’s Four Horsemen of Apocalypse, Osiris and Isis were murdered. Any chance of Adam being a hero was destroyed by his family’s deaths. Broken and angry, Black Adam renounced any allegiance he had built with heroes and morality. He committed appalling genocide in Bialya to avenge Isis and Osiris. As a result, World War III began.

In just under two days, Black Adam decimated everyone and everything in Bialya. Even the combined efforts of the JSA and the JLA couldn’t stop him. Only Zatanna’s word-based magic could invert Black Adam’s power and cause him to depower himself. The loss of Isis and Osiris would continue to haunt Adam.

What are you looking forward to seeing from the JSA in Black Adam? Join the conversation alongside other DC fans in the Let Your Spoiler Sideshow Facebook Group, and don’t forget to Let Your Geek Sideshow!