All comic book fans have seen some of our most cherished characters transform throughout our (and their) lives. And as one of the most iconic and popular females in DC Comics history (if not all comic book history), Catwoman is no exception. Always walking the line between good and…not so good – whether she’s slinking through alleyways and stealing gems, or fighting crime alongside her beloved Batman – she knows how to do it in style!  This ferocious kitty has scaled her way through the trends of time and has whipped up a few memorable outfits along the way. Let’s take a look back at some of Catwoman’s most memorable costumes: 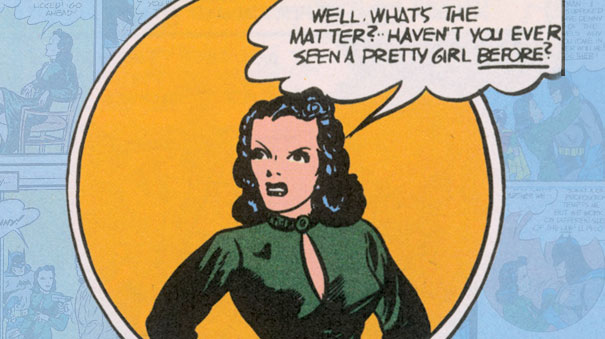 Catwoman’s first appearance is traced back to 1940, in Batman #1. Simply referred to as ‘the Cat’, she initially didn’t wear a disguise. That’s right! This thieving gal was stealing gems (and hearts) sporting a classic mischievous look with curled raven-colored hair and a flowing emerald-colored dress that accentuated her ‘gams.’ 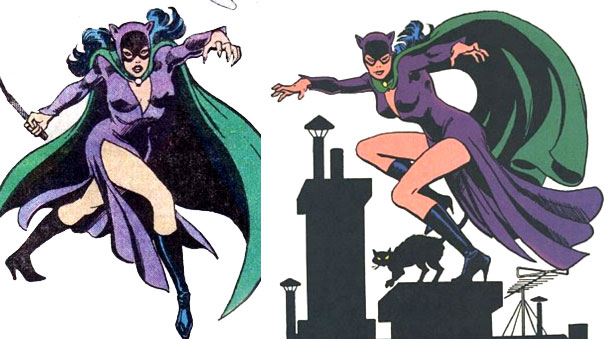 Donning a costume deemed more befitting of her cat-titude, the Golden Age Catwoman emerged in the 1950s. Representing the classic villainous color scheme of this time, she masked her face with a sassy purple mask and matching colored dress that, once again, emphasized those famous legs that caught Bat’s eye! Completing the look, she wore green accents that tied to her flowing green cape. (One of the earliest clues that she may not be just a villain…) 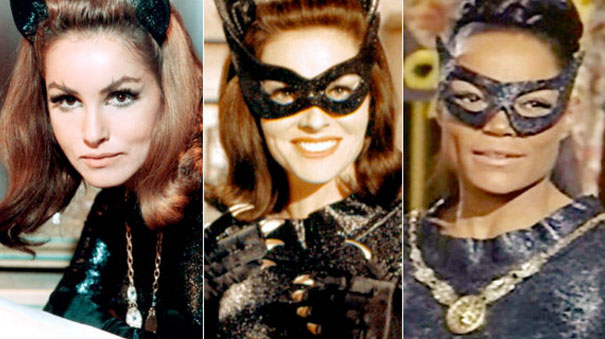 Over the two year run of the campy 1960s Batman television series, our feline femme fatale was portrayed by three actresses; Lee Meriwether, Eartha Kitt, and perhaps most famously, Julie Newmar. As Catwoman, Julie Newmar wore a glittering black ensemble that perfectly suited her sleek curves and the show’s over-the-top personality. Accessorized with cat ears tucked beneath her voluminous brunette locks, and a long golden medallion around her neck, above all I’d argue that it was her whisker-like eyebrows which really completed the look. Seriously though, can’t you just imagine her licking the back of her hand to set those brows into place? 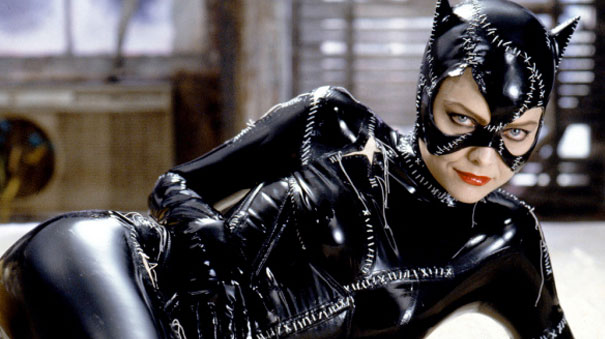 Michelle Pfeiffer’s portrayal of Catwoman in Tim Burton’s 1992 movie Batman Returns is THE cat’s meow! For the first time we got to really see Selina Kyle evolve from a skittish scaredy-cat into the feisty feline we’ve all come to know and love. We watched a defeated Selina in her pink-hued apartment, piecing together the now iconic outfit on her sewing machine, and then when she finally stepped out in her shiny skintight-leathered suit with these white stitches everywhere, the costume instantly became a portrayal of this character. Her life was shattered into pieces and she personally put herself back together again and had started anew. Not only does this costume scream “Look at me now!” she had the perfect piercing blue eyes and heart-stopping red lips. Adding to this new edgy and dangerous appeal, I loved how her gloves were capped with claws that looked like an open swiss army knife! 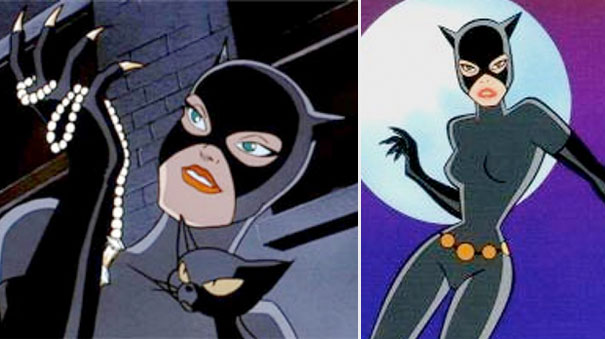 In Batman: The Animated Series Catwoman had a calmer, mature personality with a classic beauty appeal that shined through her outfit. Bruce Timm’s original costume for the character was a more traditional all-black design, but the creators worried it wouldn’t stand out enough against the dark backgrounds of the series (although it was later retooled for The New Batman Adventures.) The animators instead chose to keep it very simple and clear.  Wearing just a silver body suit with some knee length black boots and gloves tied perfectly with the classic cat cowl, and a circular golden belt wrapped around her hips gave her outfit that finishing touch. 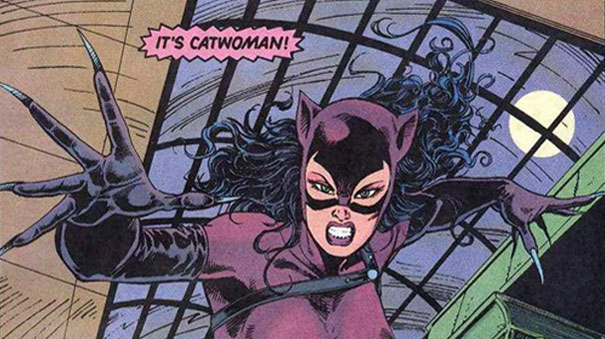 In the 90s comic depiction of Catwoman, artist Jim Balent ushered in her return to purple. Wearing a violet catsuit with long shiny black boots and gloves, it was a minimalist design that didn’t overshadow her personality. We also saw her long waves of jet-black hair and dark hued lips, which gave her more of that villainous appeal. 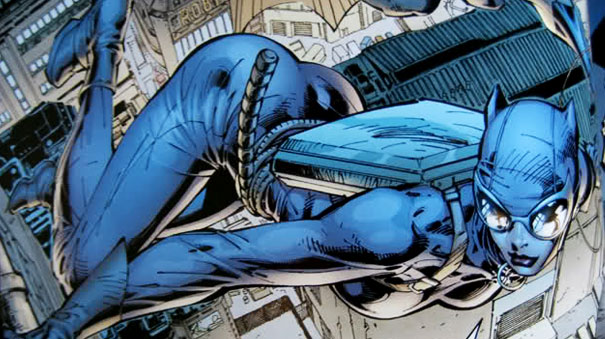 One of the memorable comic book outfits, is Jim Lee’s design for Jeph Loeb’s graphic novel Hush. Back in a black, she wore a simple catsuit with a large silver ringed zipper. Transparent blue over-sized goggles gave this classic look her finishing touch. With big black boots to run around Gotham and flexible, and the ability to conveniently wear her whip around her waist like a belt when not in use, this appears to be one of her most practical costumes in my opinion. Many similar designs would follow, with different colored goggles and in some cases, a bit less modesty… She does like to live dangerously after all! 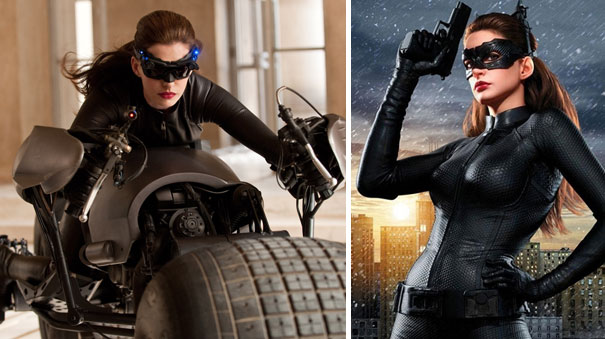 In Christopher Nolan’s adaptation The Dark Knight Rises, Selina Kyle returned to the big screen with the talented Anne Hathaway, who proved she could pull off the infamous femme fatale just like Pfieffer did. With more modern and tech savvy gear, Hathaway fit purr-fectly into the black catsuit, and managed to revamp the classic look. In this depiction, she replaced her razor sharp claws with thigh high boots supported by metallic spiked heels, and addressed another quality that cats possess besides their agility or sharp claws –  Like a cat’s ability to see at night, she was equipped with tactical night vision goggles which were cleverly able to flip up when not in use to mimic the pointed ears of a cat. 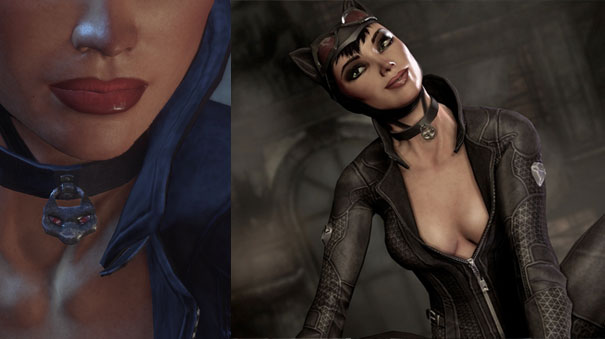 Throughout the decades every one of Catwoman’s costumes have embraced the many personalities of the beloved cat burglar, and I can’t wait to see what’s how she continues to evolve. After all, a cat does have nine lives, so why shouldn’t she have a little fun changing it up?