Derek Andersen at DailyDead.com goes in depth with the Hot Toys Elder Predator Sixth Scale Figure. Here are some of the photos and highlights from his review: 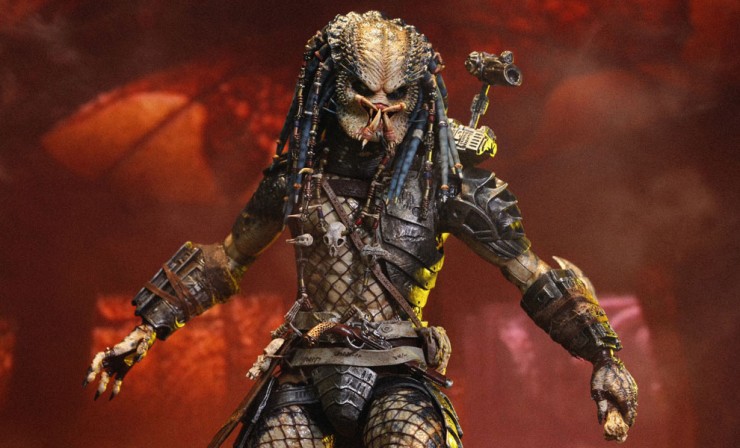 Though he is only on screen for a brief scene, fans of 1990’s Predator 2 will always remember the Elder Predator for showing respect to Mike Harrigan by passing on his flintlock pistol with “Raphael Adolini 1715” engraved on the shaft. Now Sideshow Collectibles and Hot Toys return that respect with their Elder Predator Sixth Scale Figure, a new entry to their Movie Masterpiece Series. 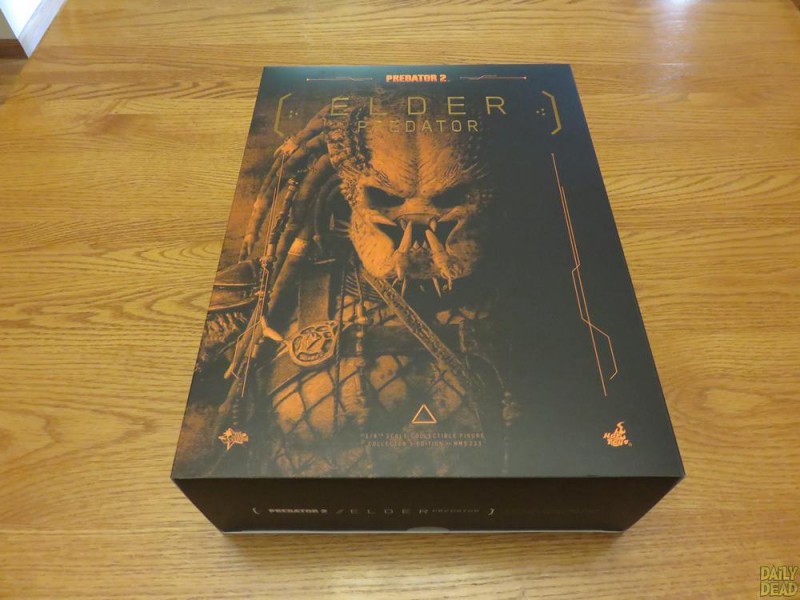 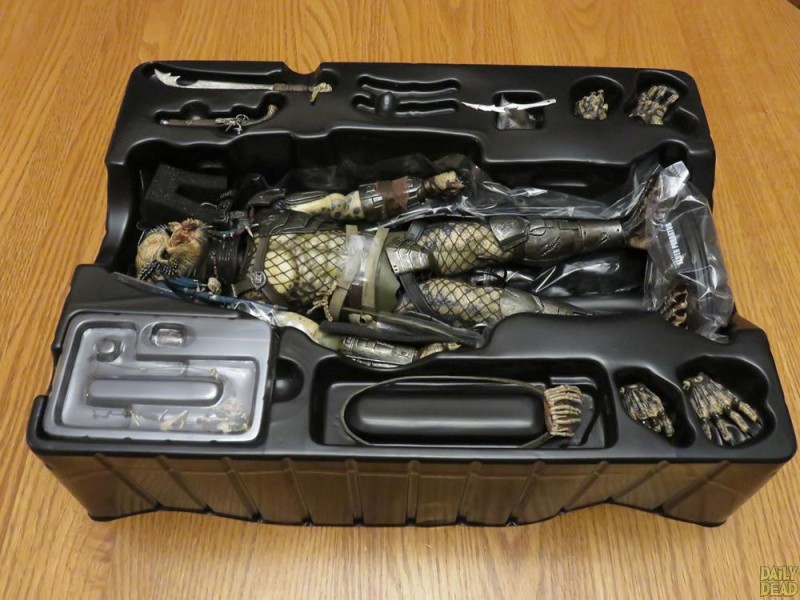 The figure’s orange and black box cover art depicts the warrior with teeth bared in a ready-to-rumble style. Inside the box, the figure lays dormant as if he were stretched out in a hyper-sleep pod with an arsenal of weapons and clawed hands sitting in arm’s reach. 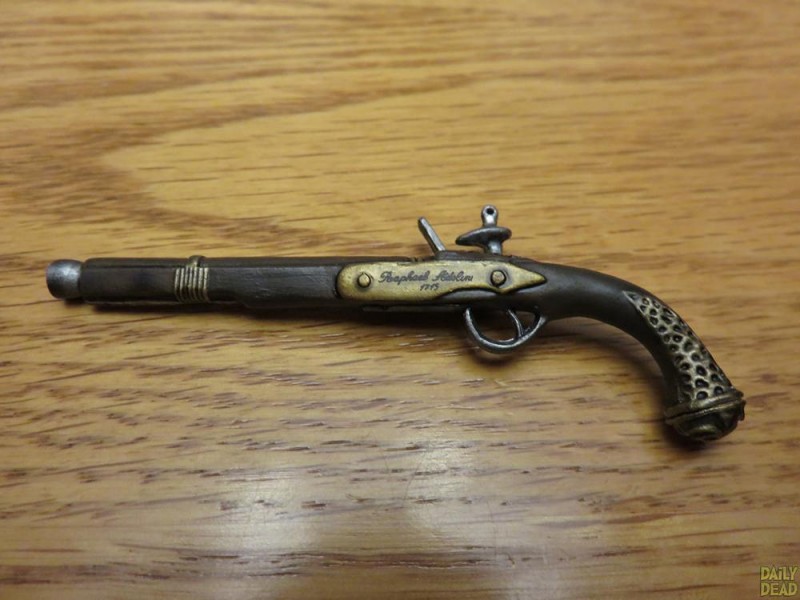 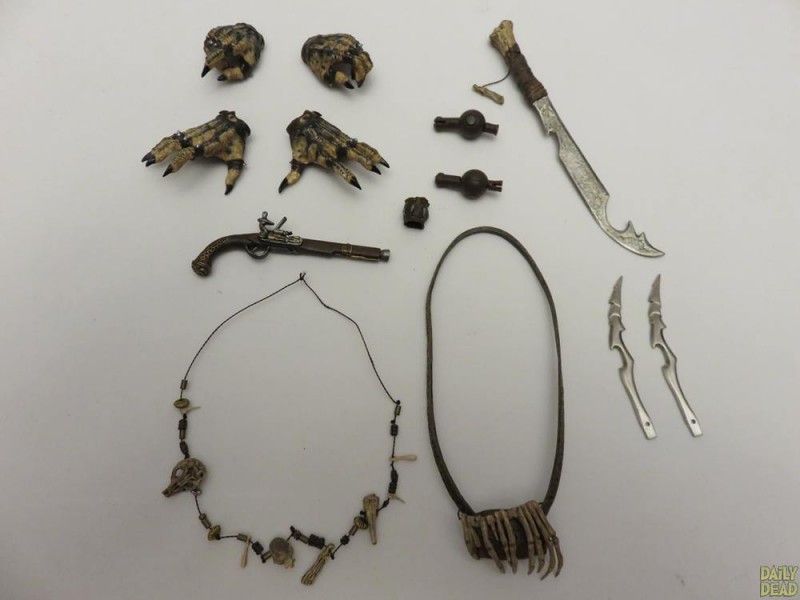 Sideshow and Hot Toys equip the Elder Predator with attachable weapons aplenty: one sword, a pair of blades, the aforementioned pistol, and four interchangeable palms (in addition to the two already attached fists) lie ready to be used in the next hunt. The bottom waistband is a little loose to hold what will be the most intriguing accessory for fans of the movie: the flintlock pistol. “Raphael Adolini 1715” is legible on the shaft’s golden plate and the curved gold handle fits into an interchangeable right palm for collectors looking to see the Elder Predator in gunslinging mode or those just fascinated with the gun’s backstory from Dark Horse’s Predator: 1718. 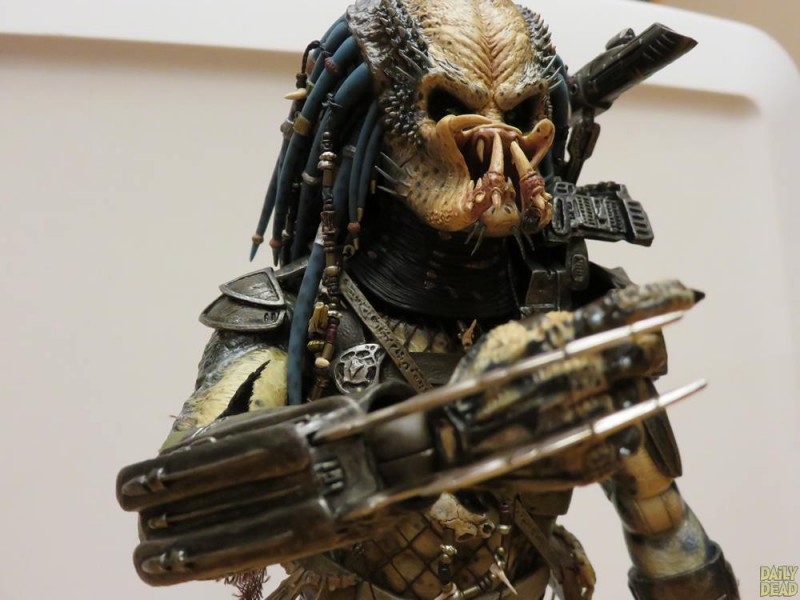 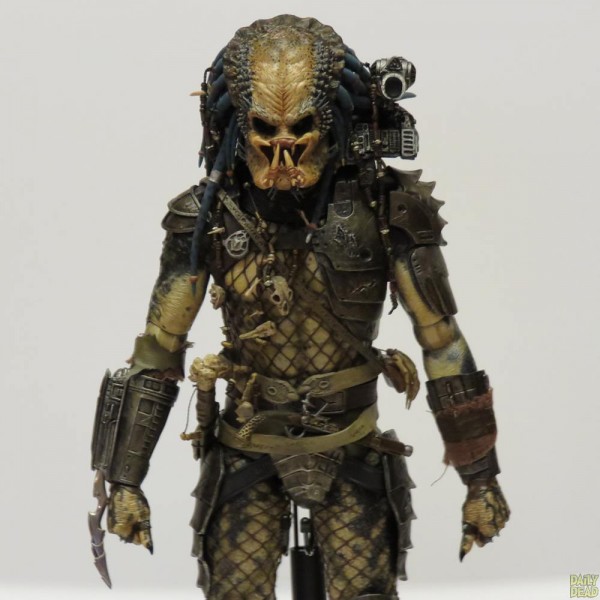 Sculpted and painted by Joseph Tsang and featuring 22 points of articulation throughout a 14-inch height, the Elder Predator is a sight to behold when standing upright. Spiked ridges border the pale flesh that stretches back from the creature’s sloping brow to meet blue rubber dreadlocks dangling from the back of his head. Decorated with tribal accessories, the soft dreadlocks are a nice tangible touch. 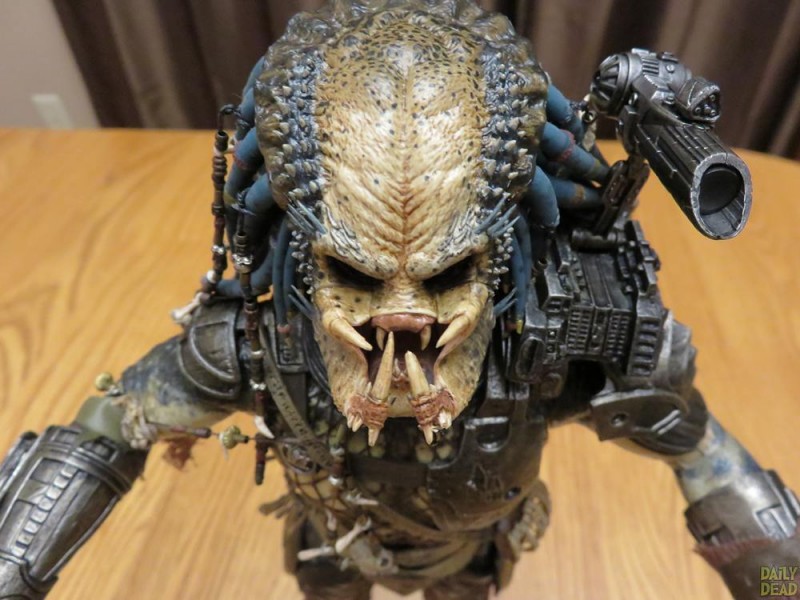 Mounted on the Elder Predator’s left shoulder is his trusty cannon. Painted a tarnished gray that gives this longtime warrior a battle-worn look, the armor on the shoulder, waist, thighs, knees and legs is a nice contrast to the patches of mottled pale flesh. The sharp-eyed collector will even notice scratches and jagged punctures on the plates, each one surely having its own story from this Predator’s centuries of combat.

From the dreadlock-draped cranium to the clawed toes, Sideshow Collectibles and Hot Toys have produced another solid entry for their Movie Masterpiece Series, properly immortalizing a character that left a lasting impression on Predator 2 fans with his thoughtfulness and mercy. If you’re a Predator fan on the fence about picking this up, just remember what the Elder Predator once advised Mike Harrigan: “Take it.”

Enter for a chance to win!

Join us on Twitter now and answer this question for your chance to win a Hot Toys Elder Predator Sixth Scale Figure.

Elder Predator gives gifts as a sign of respect. What is the most honorable gift you have given someone? *Susan #SideshowHonor

Read the full review at DailyDead.com

Sideshow presents the Valkyrie of the Dead