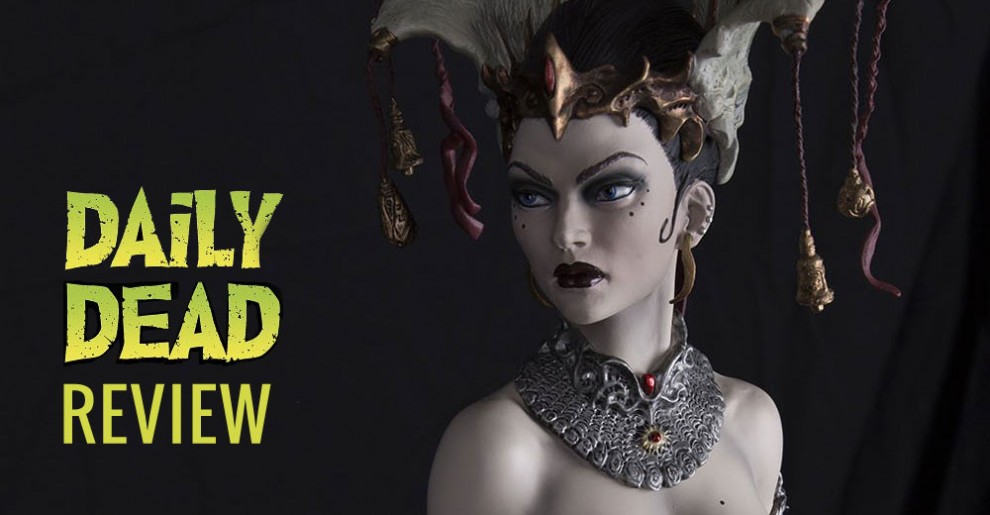 I first gazed upon Sideshow Collectibles’ Court of the Dead series in person at the 2014 San Diego Comic-Con, and while they’ve released a number of original pieces over the years, this is their first major push in creating an original, dark fantasy world, one filled with unique characters.

Court of the Dead is spearheaded by Tom Gilliland, Sideshow’s Creative Director, who gave us a personal tour of their Comic-Con booth last year, as well as an in-depth look at the new line. Seeing all of the Court of the Dead figures together and learning about Sideshow’s creative process was a fascinating experience. That being said, getting the chance to personally unbox, assemble, and photograph the Queen of the Dead Premium Format Figure, courtesy of Sideshow Collectibles, was nothing short of incredible, as she’s sure to make a perfect addition to anyone’s collection. 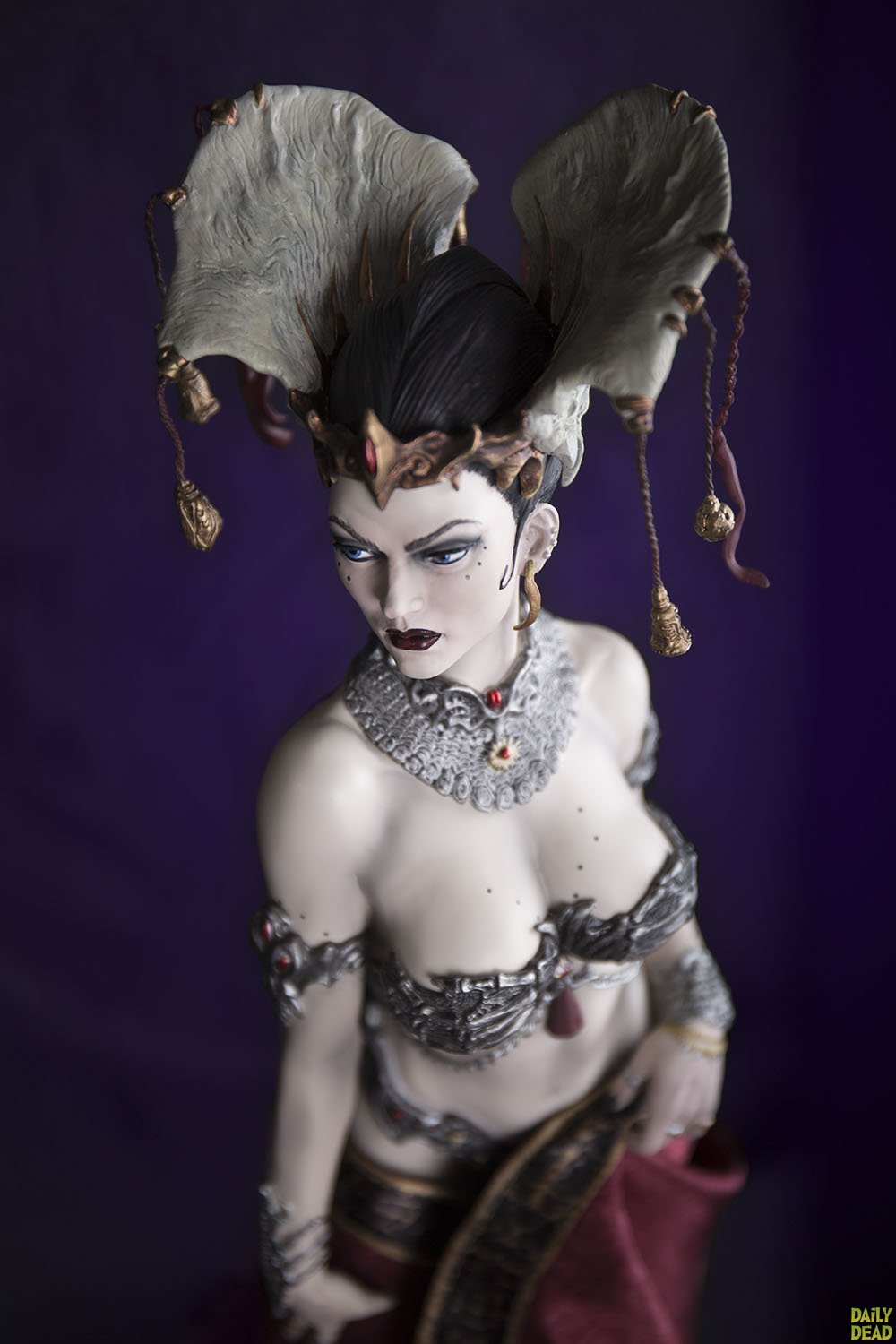 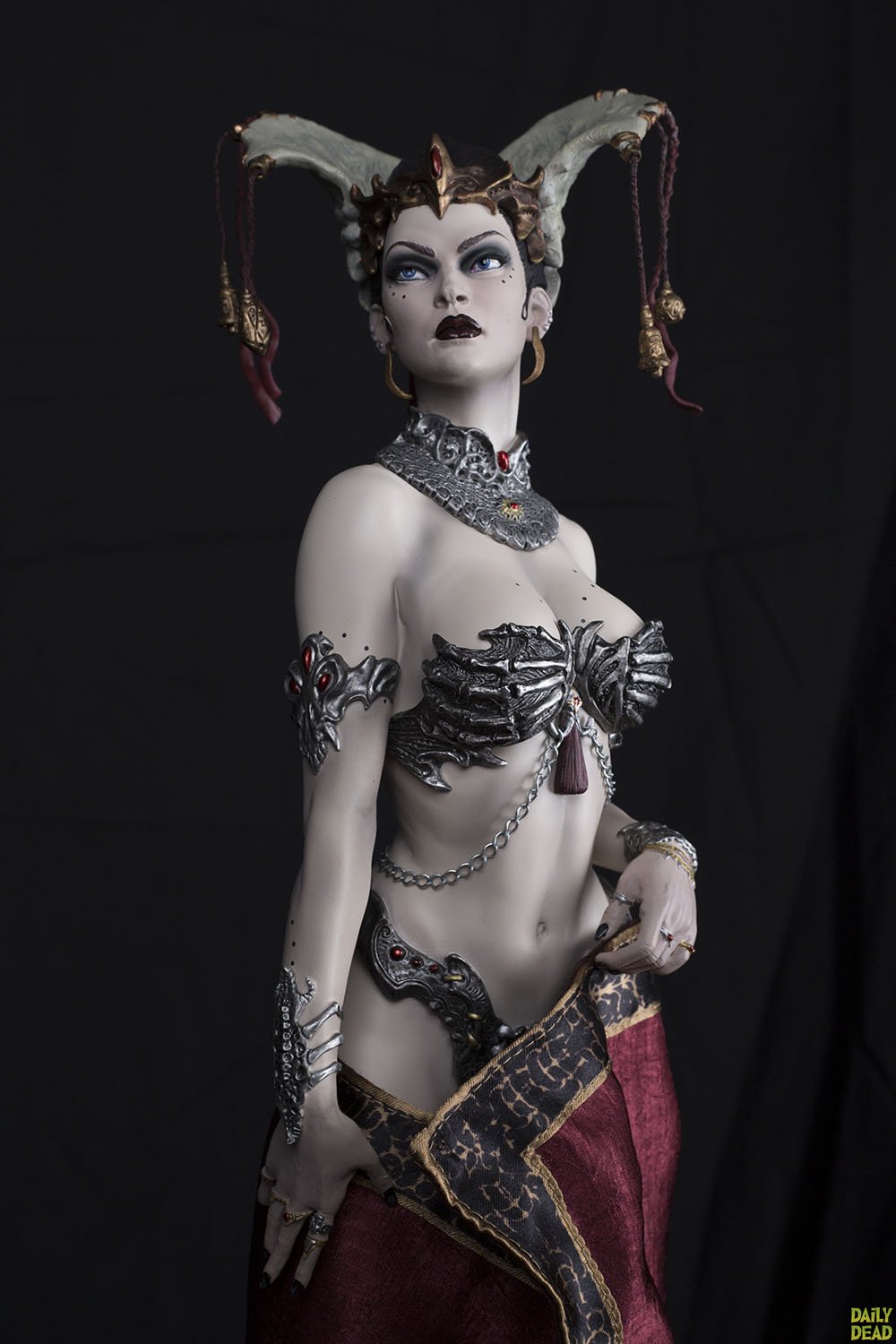 For those unfamiliar, the Queen of the Dead is named Gethsemoni, and she’s described as the embodiment of Death’s “dark creative spirit, limitless guile, and soaring ambition.” Impressively, Sideshow’s team perfectly captures that description in a single pose.

Gethsemoni was sculpted in such a way that gives her an incredible grace and royal air, making her beautiful, mysterious, and terrifying from any angle. The intricate detail and careful attention to her armored chest piece and collar, as well as her very organic headdress/crown, is flawless. 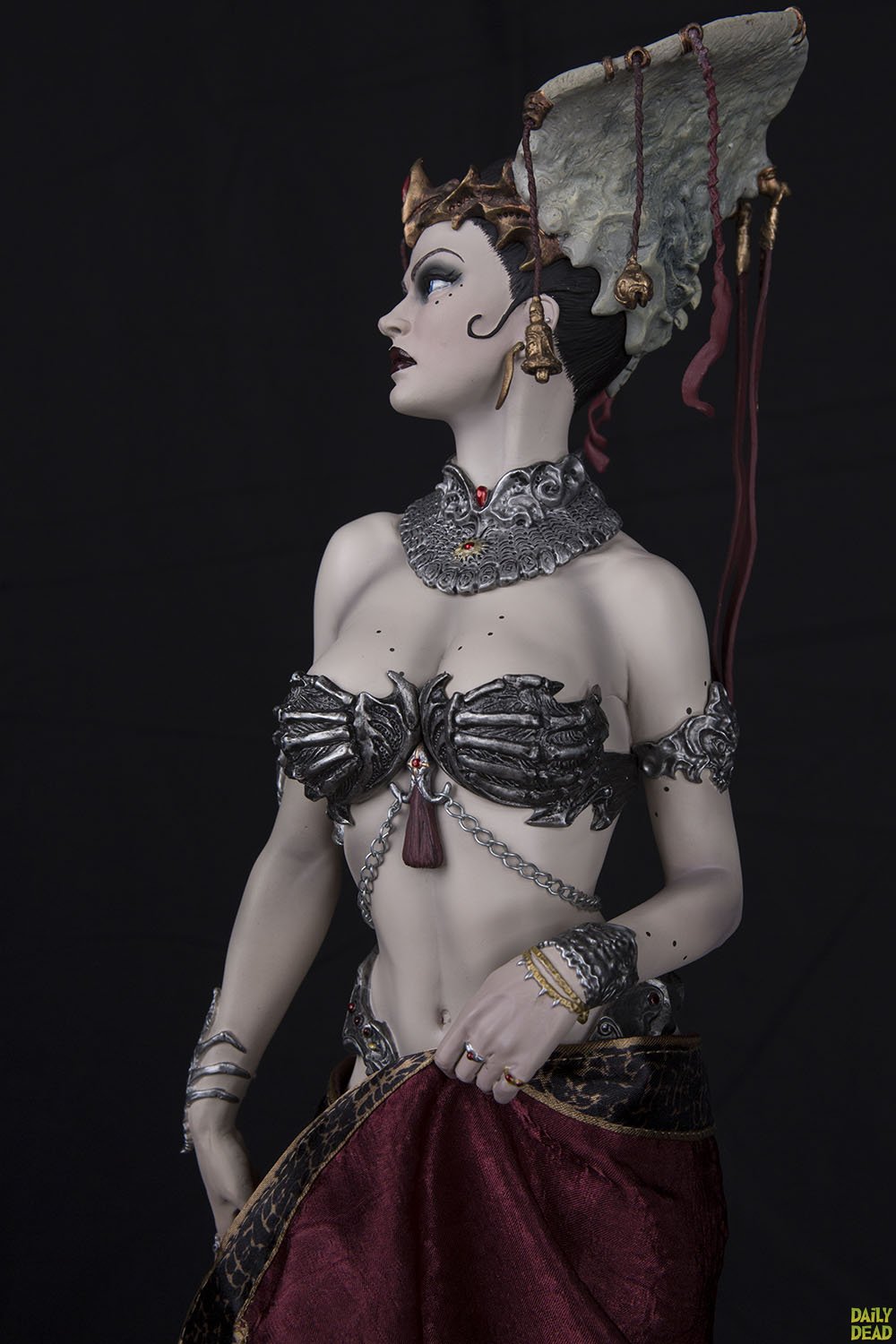 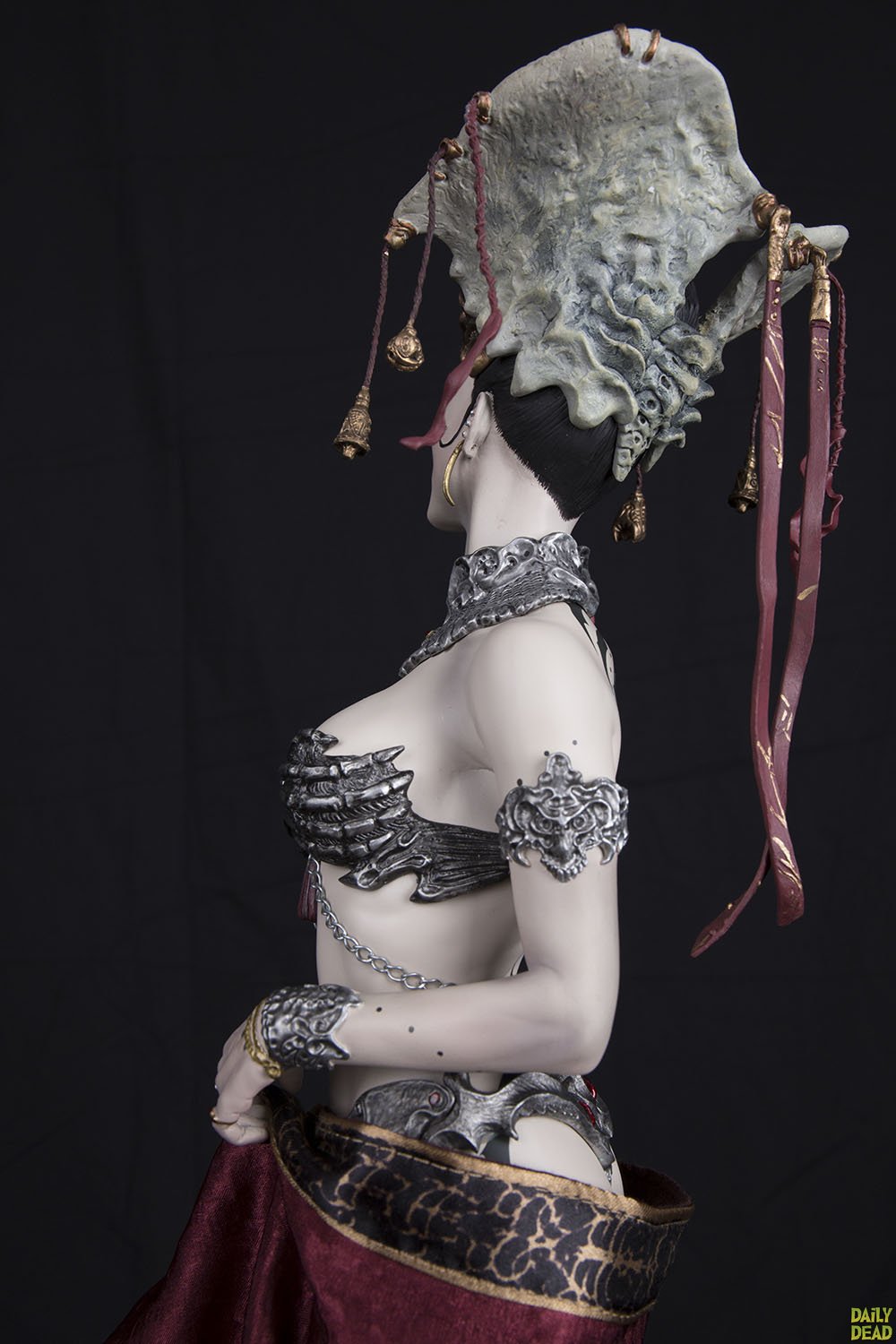 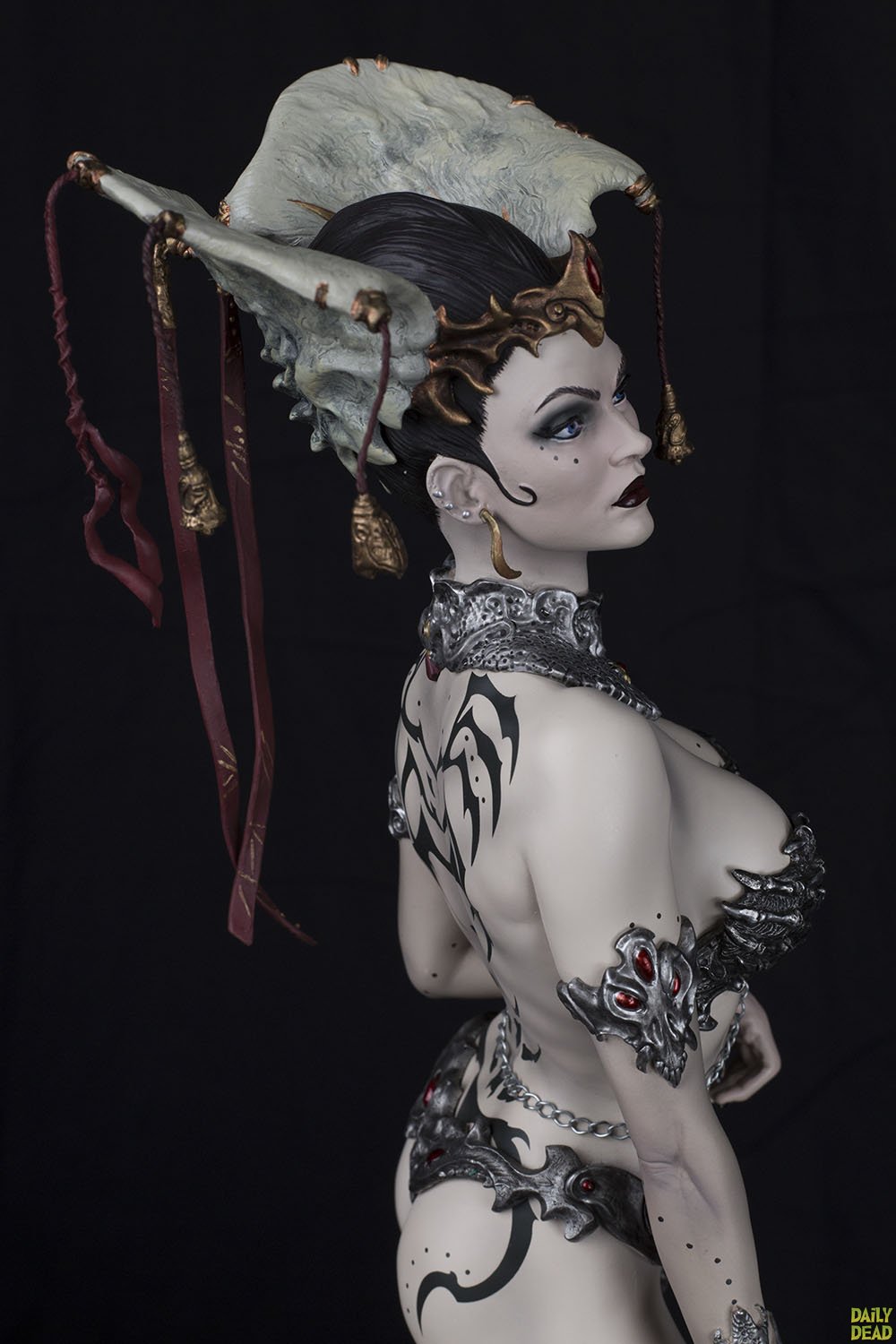 Unfolding the satin cloth when assembling the piece, I discovered thin wires sewn into the material, allowing me to drape it around her figure while still keeping its sculptural flow. Sideshow’s simple step of allowing the owner to place fabric around Gethsemoni’s body makes for a nice personal experience. Her hands are positioned in such a way that you can rest the satin within her grasp, the added texture providing an extra level of beauty and depth to the sculpture. There is such elegance brought to this sculpture, despite being a depiction of a ruthless overseer of the Underworld.

Hinting at her dark side, however, are the skeletal tattoos running along her shoulders and sliding down her back with a sinister symmetry. The markings show another side of Gethsemoni, adding intrigue to her hauntingly beautiful appearance. 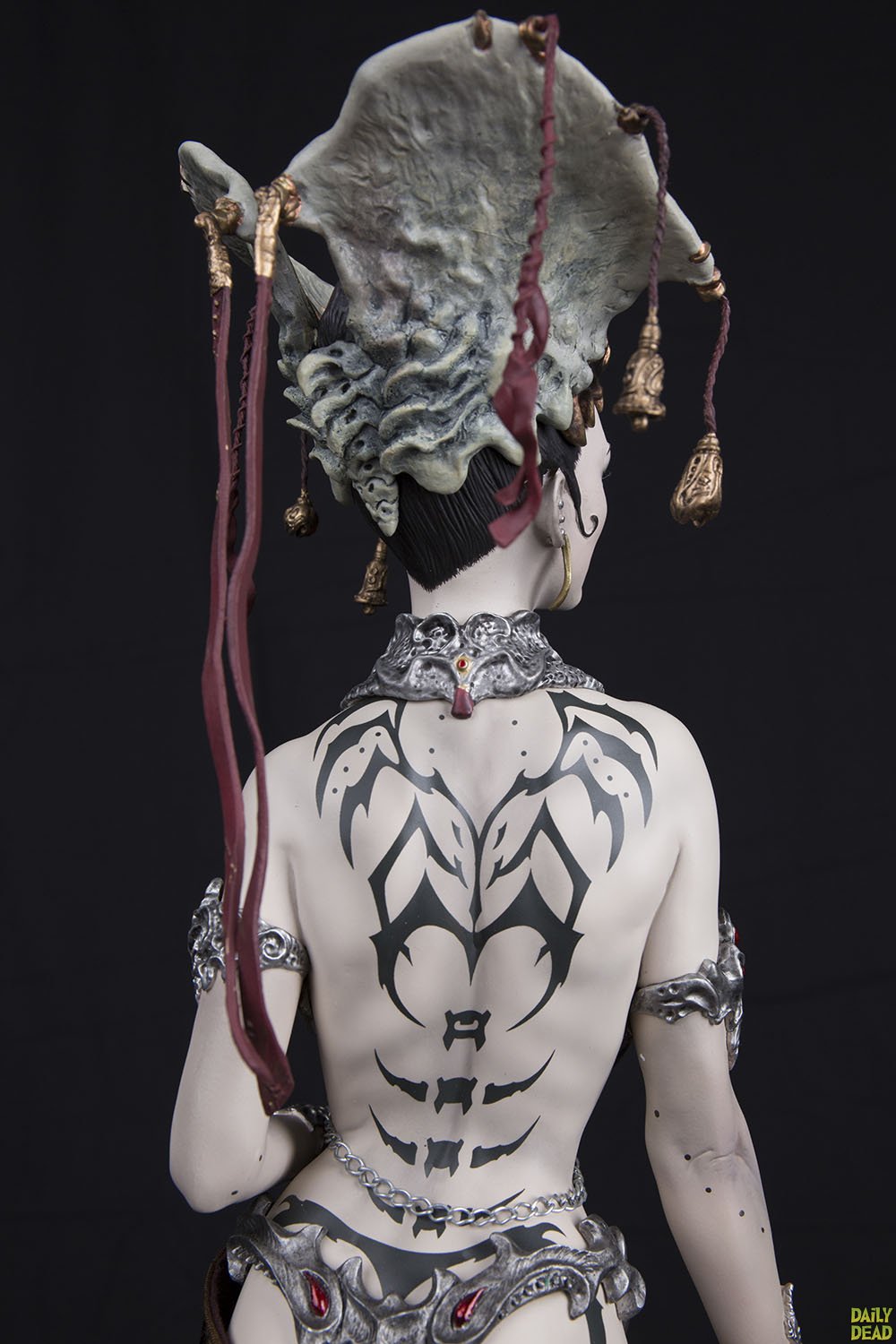 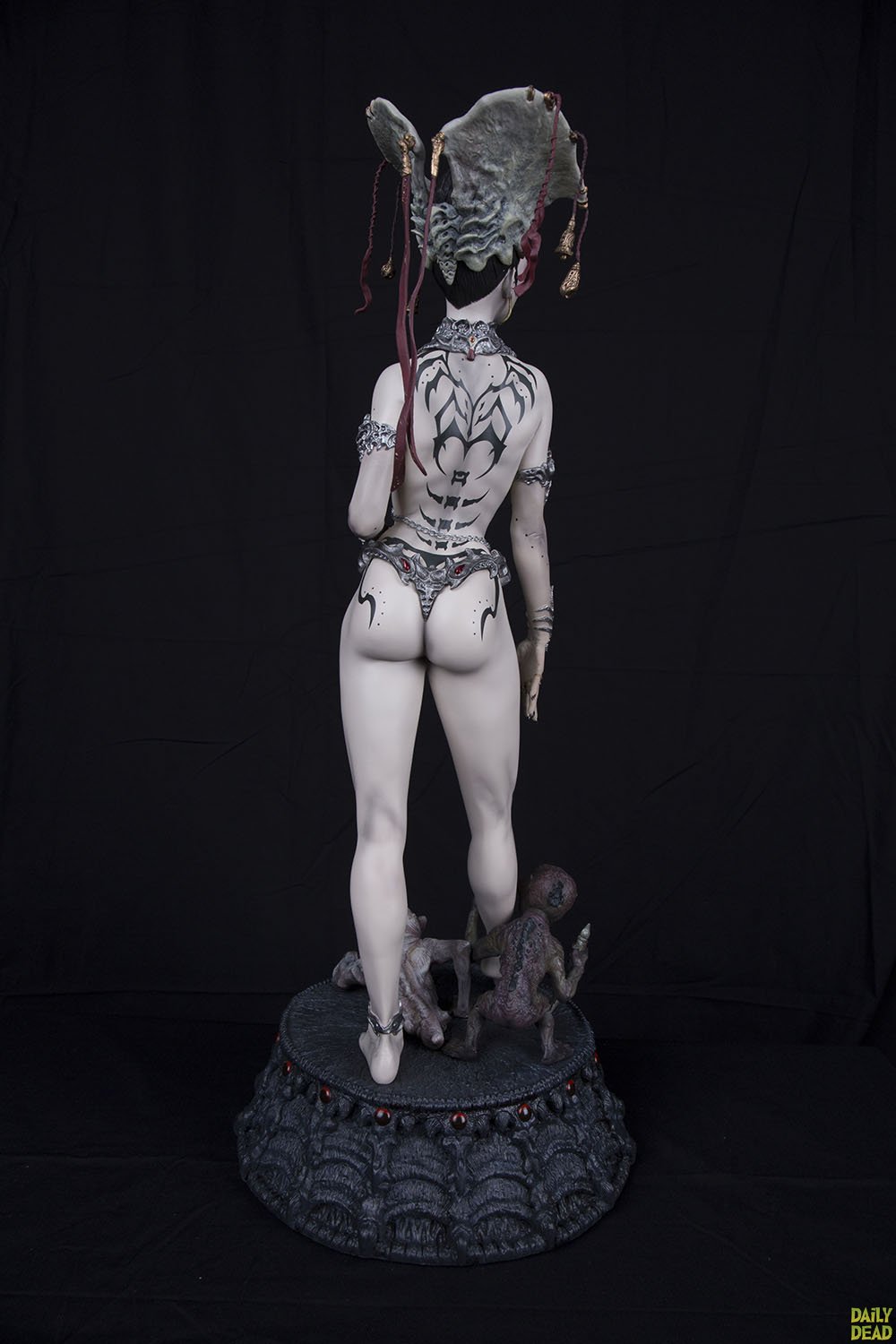 Complimenting the Queen of the Dead’s imposing form and macabre attire are the pair of minions at her feet. Wrapped around Gethsemoni’s right calf is a black-eyed creature seemingly spawned from Satan. Its sharp teeth protrude from exposed gums in a frightening fashion similar to the Chatterer Cenobite from Hellraiser. Dragging itself forward like a fallen zombie from The Walking Dead, the tiny creature on the right side of the base makes a startling impression with its sagging flesh and white, lifeless eyes. Reminders of Gethsemoni’s grim purpose as Death’s first-born creation, these little monsters perched upon the figure’s black and gray base (its rim regally outlined in blood-red jewels) perfectly represent the darker, less glamorous side to the Court of the Dead. 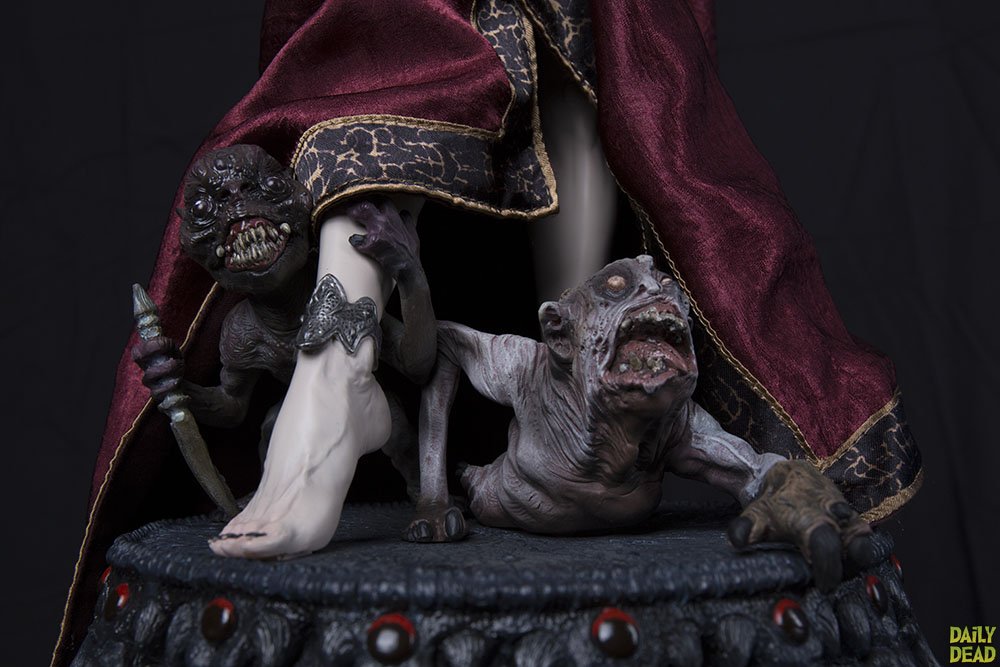 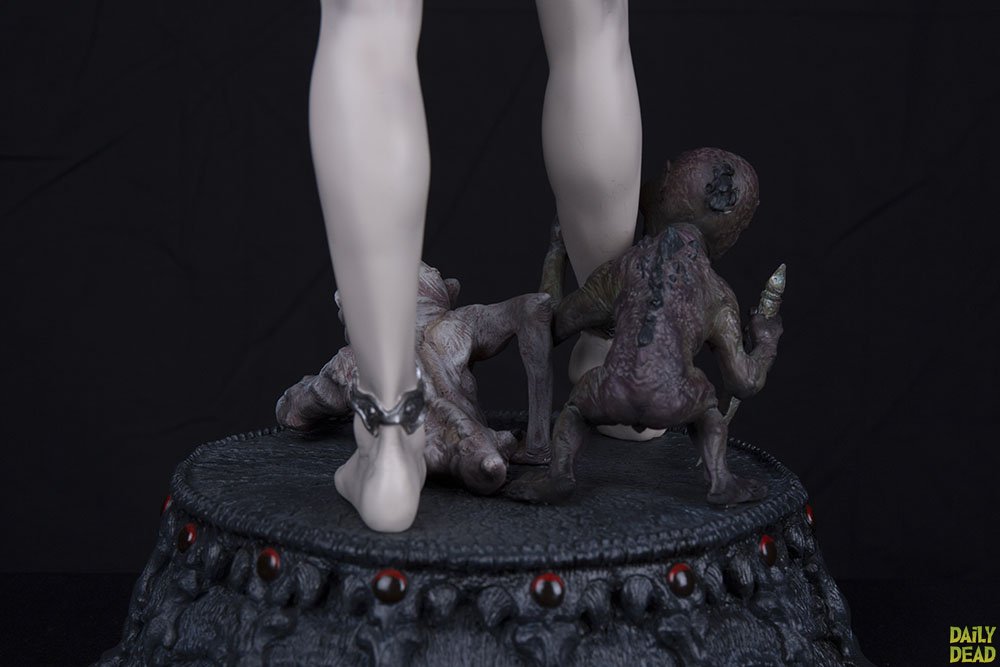 Hinting at the alluring horrors within, the fully decorated box is impeccably detailed with a soft touch finish and spot gloss highlights that call attention to the faction crest. The inclusion of Gethsemoni’s story on the back panel is a nice informative touch, with the displayed concept art from Stanley Lau (Artgerm) telling a design-based story of its own. 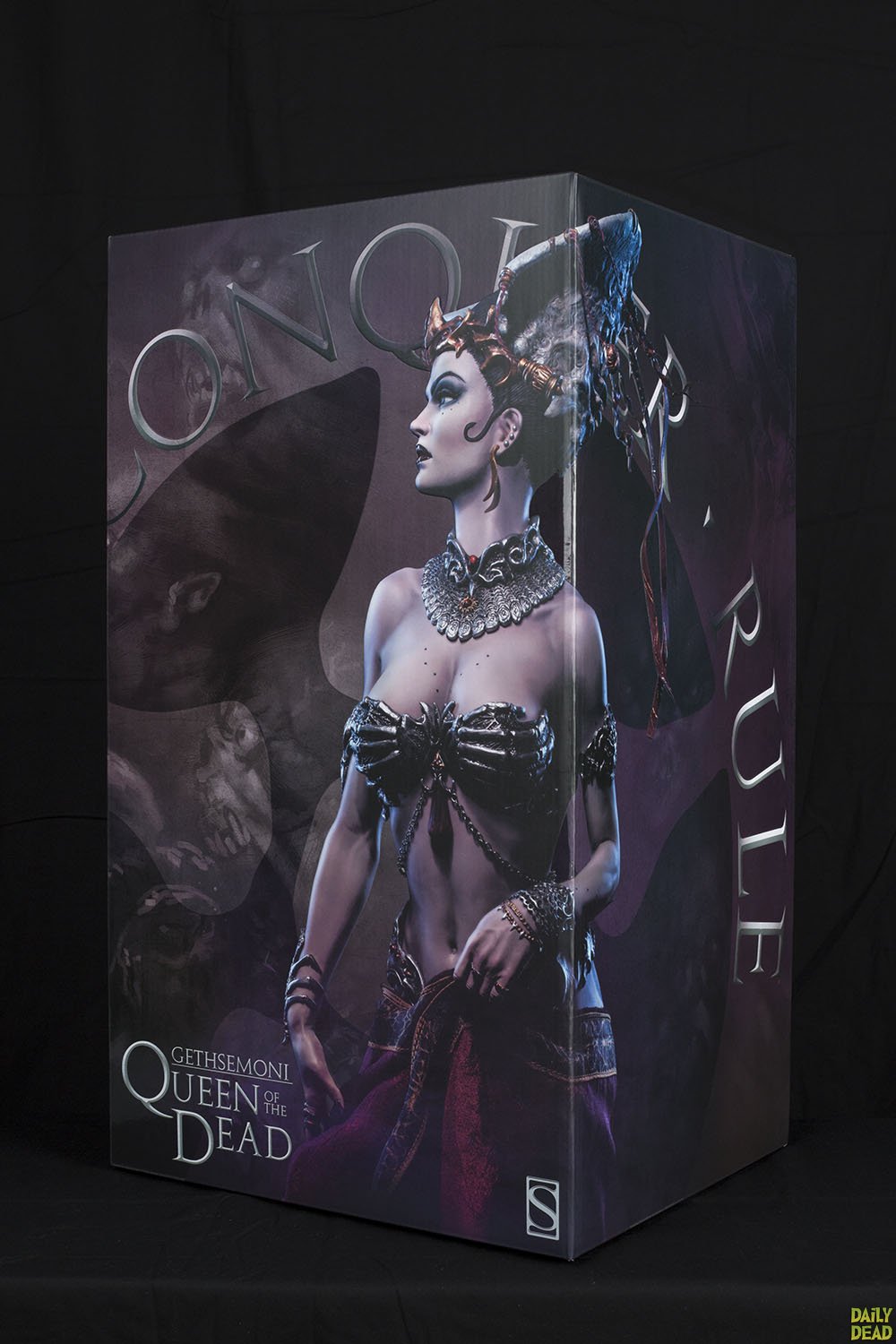 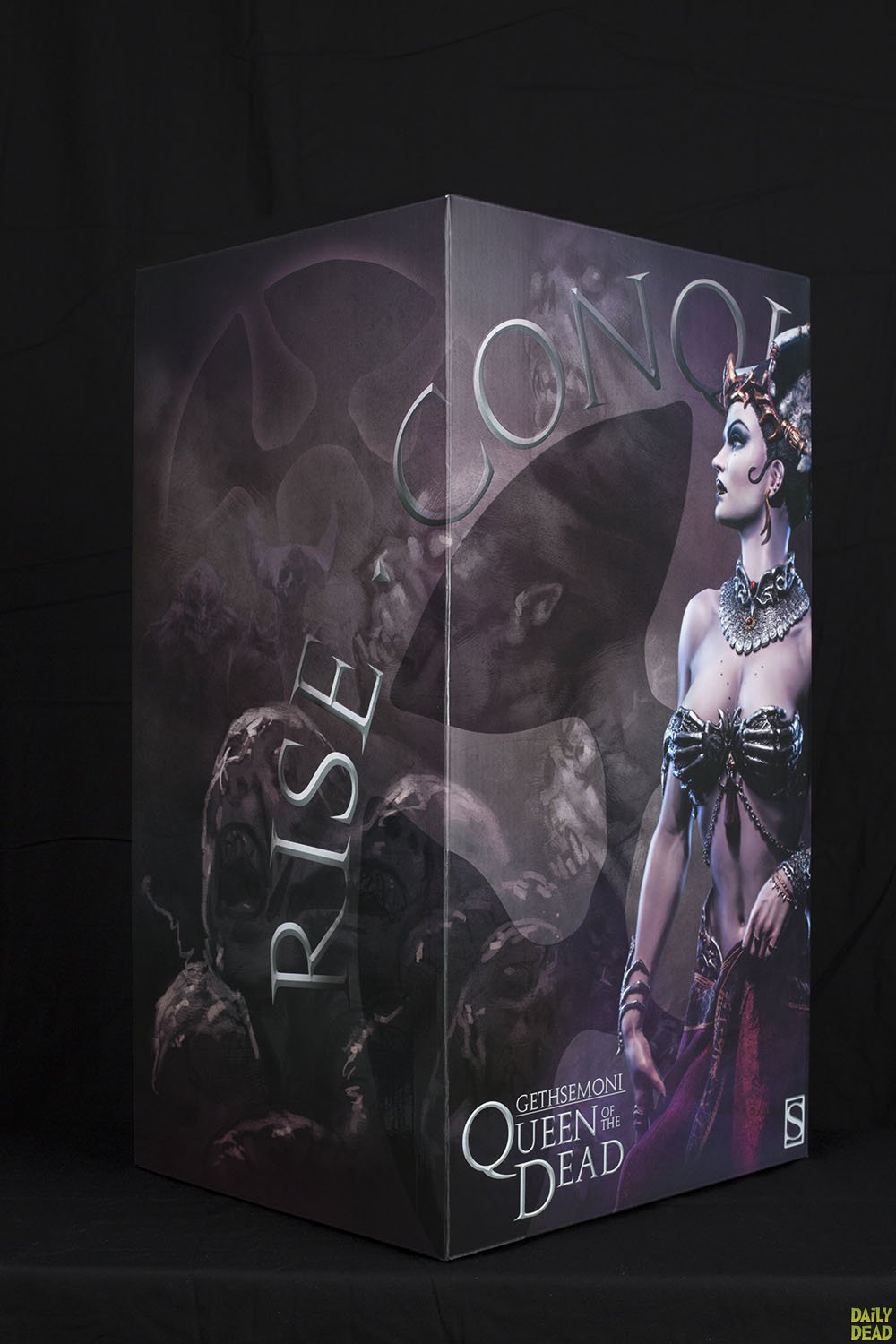 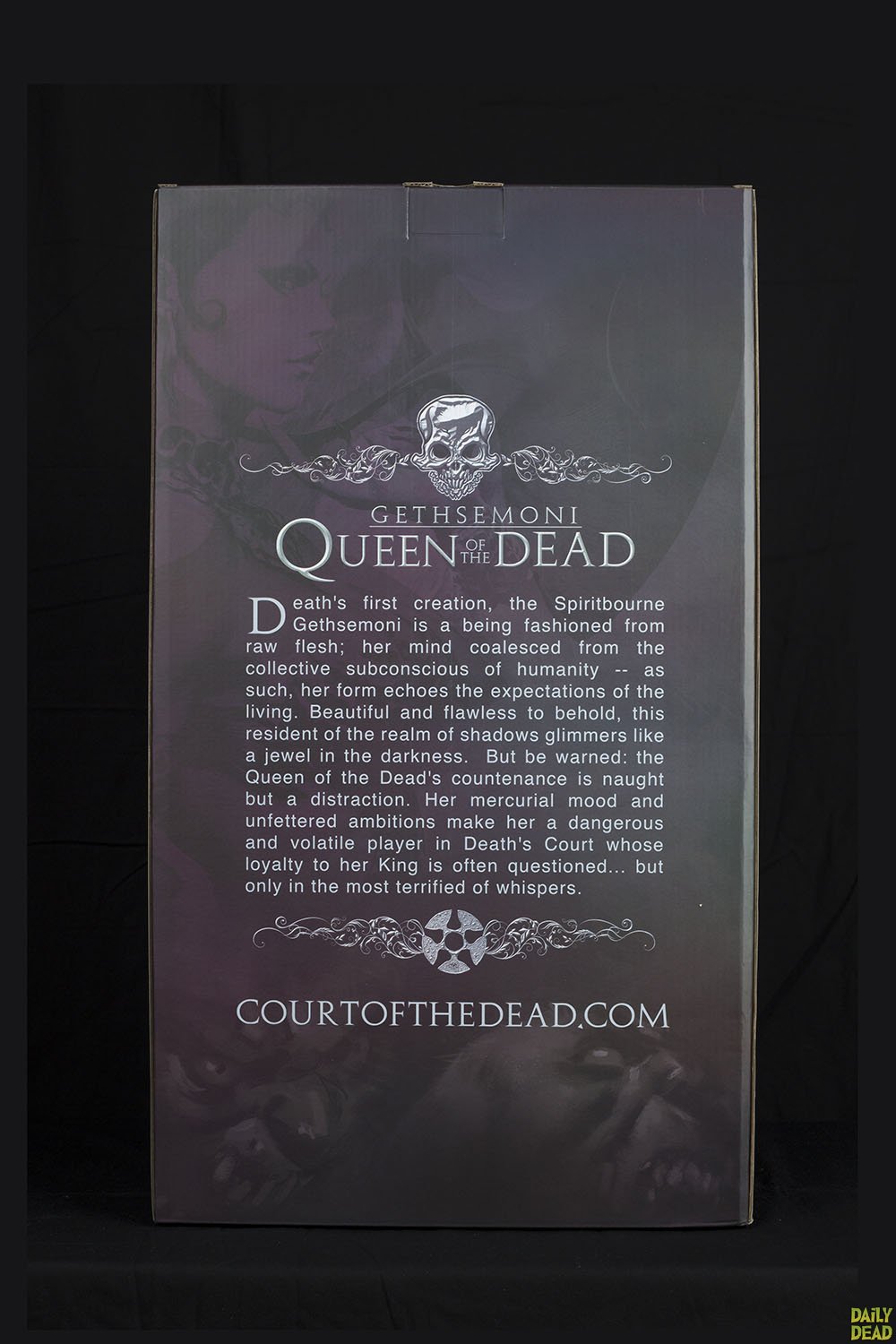 Further expanding Gethsemoni’s story is the Court of the Dead website, which includes motion comics, backstories, and concept art for the eclectic characters within the line. After experiencing the top-notch craftsmanship, downright jaw-dropping details, and eye-popping appearance of Sideshow Collectibles’ Queen of the Dead Premium Format Figure, I can’t wait to get my hands on another macabre member of the Court of the Dead line.