On March 19, 2014, Sonar Chief Petty Officer Geoffrey Walker and the crew of the USS Hampton set out on a real life mission, one that would rival the most captivating science fiction adventures. In a high profile event for the U.S. Navy and our nation, two fast-attack  submarines departed for the North Pole to conduct extensive testing in Arctic waters.

“Our presence in the region coupled with the training that our submarine crews will participate in during ICEX 2014 ensures that our interests in the region will stay secure, support future safety and promote defense cooperation with many of our state partners.” 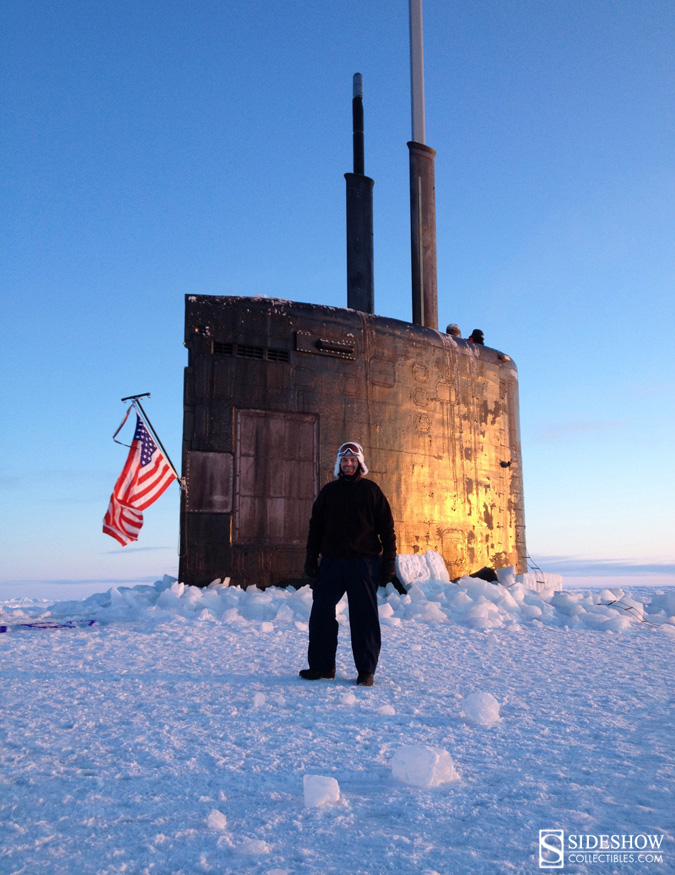 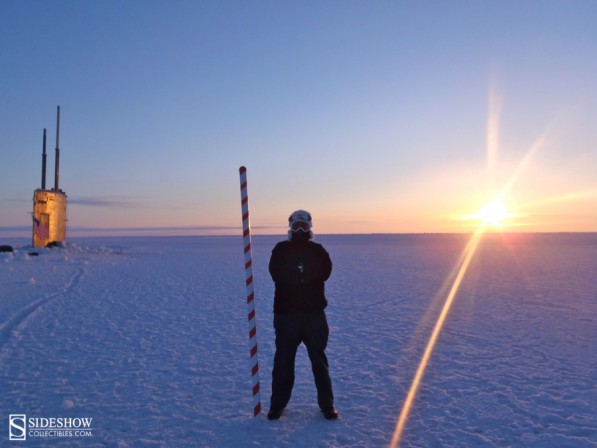 Aboard the USS Hampton, based out of San Diego, Chief Walker is regarded as the leading expert on Sonar and Foreign naval weapon systems.

But he is also easily known as the ship’s biggest Star Wars fan, routinely interjecting humor and references from the beloved saga into daily operations, such as, “You’re not actually thinking of going in to a minefield?!”

Prior to the expedition, Chief Walker contacted Sideshow with a fantastic idea for a unique photo opportunity, inspired by his particular love for the opening scenes of Star Wars Episode V: The Empire Strikes Back, and the famous Rebel battle on the frozen ice planet, Hoth.

Celebrating a worldwide fandom, how cool would it be to pay homage to Star Wars in one of our planet’s most Hoth-like environments? Sideshow’s Sixth Scale team members searched the archives and were honored to provide the crew with a Snowtrooper Sixth Scale Figure and Darth Vader Deluxe Sixth Scale Figure to make the trek. 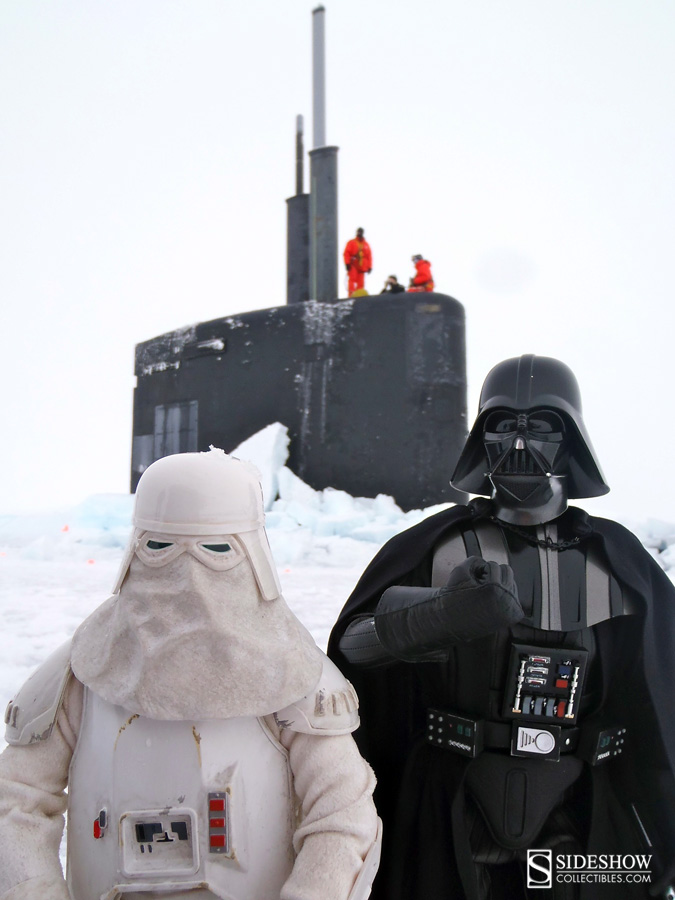 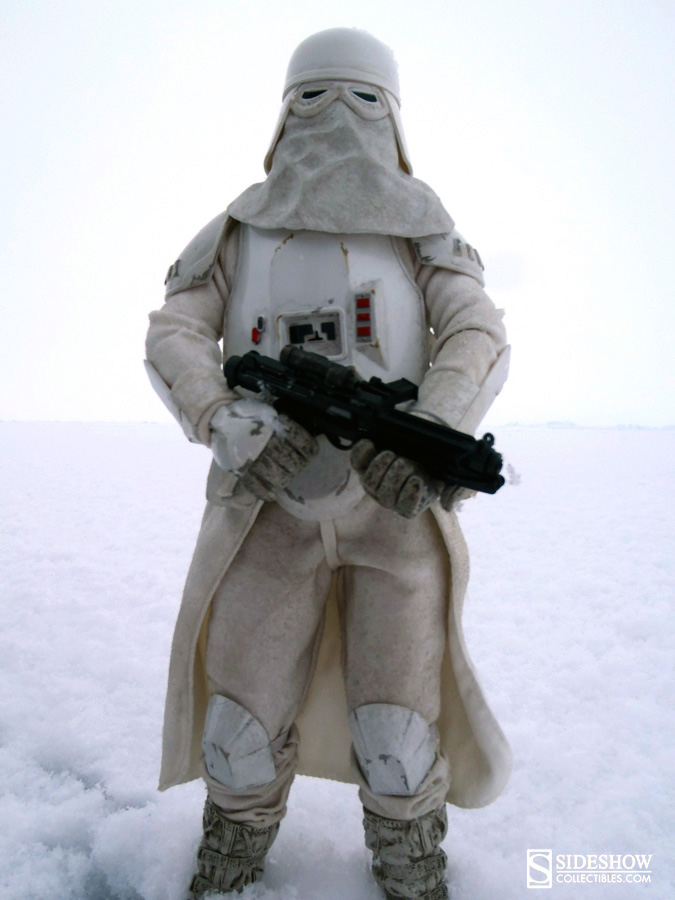 “For two decades now, Sideshow Collectibles has had a rich and fulfilling history of exploring the Star Wars Collectible Universe, working with world class artists to create collectible figures that uniquely capture the essence of its characters for a global audience,” said Sideshow President and CEO, Greg Anzalone.

“When Chief Walker contacted us with this once-in-a-lifetime opportunity, we were thrilled to participate with that same spirit of adventure, and help him find a way to represent the galaxy far, far away among the furthest reaches of our own planet.”

The crew of the USS Hampton have since ‘finished their circle’, and returned with picturesque greetings that delightfully juxtapose the Star Wars antagonists against an out-of-this-world backdrop, with the immense vessel and breathtaking landscape. 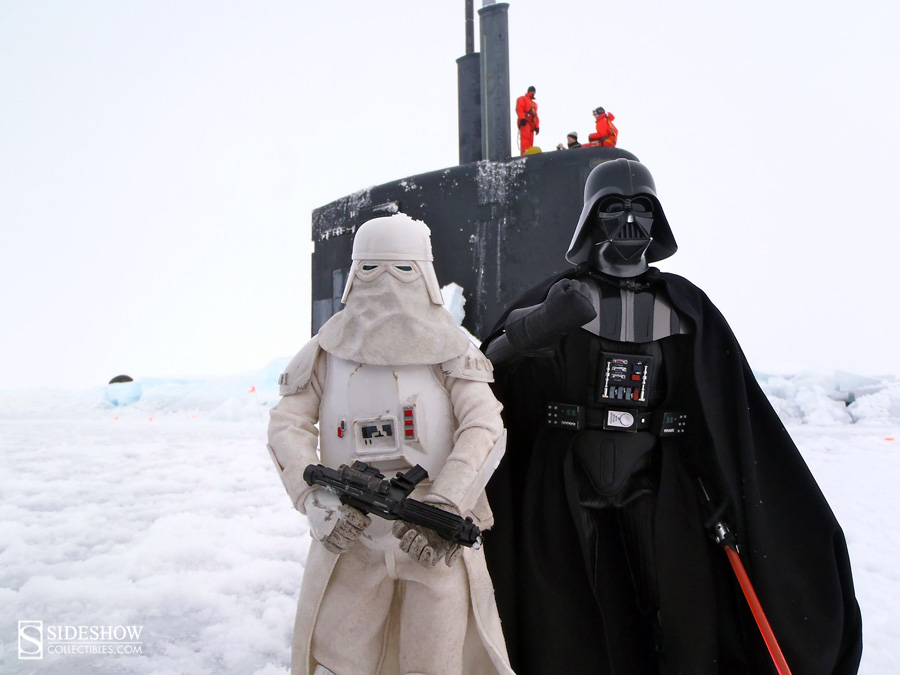 “Everyone on board was floored when they saw [the figures]. It looks like we had a Snowtrooper standing topside watch up there,” Chief Walker wrote.

“[The Sideshow figures] helped us along our way to the North Pole and back and ensured there were no Wampas to attack the crew upon surfacing through the ice. They also stood watch in the Sonar “shack” helping the ship’s men look for any Rebel Scum.”

Sideshow was proud to support the crew of the USS Hampton as they worked to keep our international waters safe. Certainly seems more effective than sending a Probe droid.

Joining our Marvel lineup is the Man Without Fear, Daredevil!