A duel with Darth Vader is a duel on two fronts: physical and emotional. Sure, he’s an incredibly powerful Sith with a dangerous lightsaber. But let’s not forget that every time he fights, he’s fighting over something important to him.

As a leader of multiple fleets of Star Destroyers, Darth Vader is a clever strategist too. So when he gets into a duel, he fights on a psychological level too. We combed the Star Wars saga for some of his most memorable battles against enemies, underlings, and former allies. Check out Darth Vader’s best fight countdown, ranked both physically and emotionally. 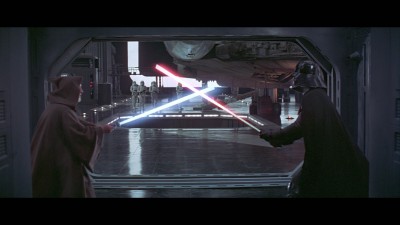 In Episode IV: A New Hope, the Death Star captures Leia and the Millennium Falcon. In order to escape, Obi-Wan Kenobi has to disable the tractor beam. In the middle of all of the tension, Obi-Wan crosses paths with Darth Vader for the first time since their duel on Mustafar.

It would be shocking enough for Obi-Wan to see his old pupil now on the dark side, but Darth Vader begins the emotional battle by saying, “When I left you I was but the learner. Now I am the master.” It shows how confident Vader is, and even reveals his desire to take on an apprentice of his own.

They engage in mortal combat, and they seem to be quite equally matched. But as Luke Skywalker walks by, Darth Vader uses Obi-Wan’s distraction to gain the upper hand. And in that moment, both Obi-Wan and Darth Vader teach Luke about sacrifice. Obi-Wan teaches Luke that being a Jedi is about making the greatest personal sacrifices for the greater good. Darth Vader shows Luke that being is Sith is about sacrificing others for your own power. These lessons change how Luke sees the world for the rest of his life.

3. Darth Vader’s Rage in Rogue One 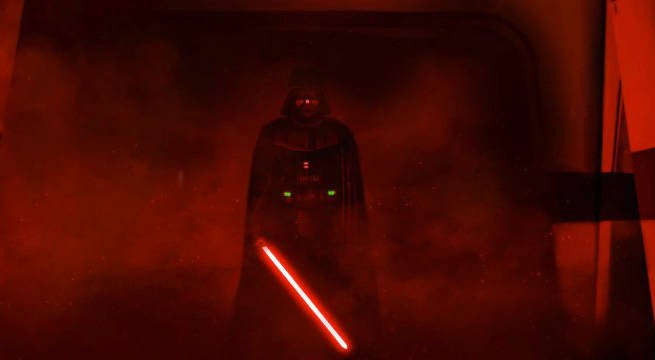 In Rogue One, Darth Vader’s entrance is terrifying. Boarding the rebel command ship Profundity, he walks in slowly, emerging from the darkness with his red lightsaber glowing, displaying his overconfidence. There’s at least 15 men with blasters ready to stop him, and he pushes through them with the greatest ease. But what is it that he’s fighting for?

The Rebellion has just acquired the blueprints of the Death Star. That is the one thing that has the potential to bring his plans to the ground- not only his plans, but the plans of his Master, Darth Sidious. The Sith have a philosophy called the Rule of Two. Darth Sidious must teach everything he knows to Darth Vader, and thus Vader must follow Sidious’ every command. In Rogue One, Vader is fighting for his place as a Sith apprentice. His determination to follow his orders makes him all the more dangerous in this fight.

2. Luke and Vader in Cloud City 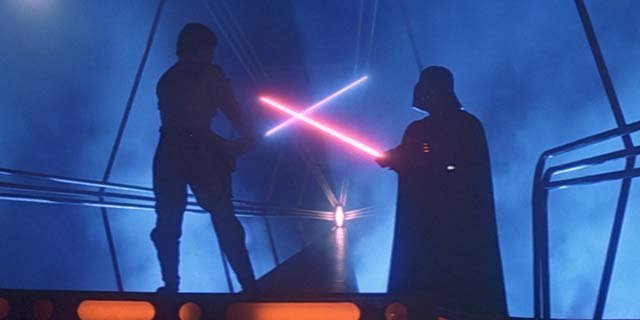 In Episode V: The Empire Strikes Back, Luke Skywalker and Darth Vader duel for the first time. Not only that, but Luke has hardly been trained in the ways of the Force at all! He had only a few days with Obi-Wan Kenobi, and at most a week more with Yoda. Luke is by no means ready to go toe-to-toe with Darth Vader. And while Luke insists that he’s, “full of surprises,” there’s only so much he knows how to do. Darth Vader fights him with one hand tied behind his back, and still bests him at nearly every turn, toying with him in their battle and in his mind.

Darth Vader mentions Obi-Wan a few times. “Obi-Wan has taught you well”. Vader cleverly pushes Luke to think of his training with Obi-Wan, even though he just got back from training with Yoda. It’s not very likely that Vader knew much about Luke’s training with Yoda, so whether Vader intended to or not, the Sith is invalidating Luke by insisting that it was only Obi-Wan that trained him. He’s reinforcing the idea that Yoda taught him nothing.

This is the groundwork for making the knowledge of the dark side seem appealing. And of course, the very end of the Cloud City duel is arguably the most iconic scene in geek history. This fight changes Luke permanently—and not just because he lost his hand.

1. Luke and Vader in Return of the Jedi 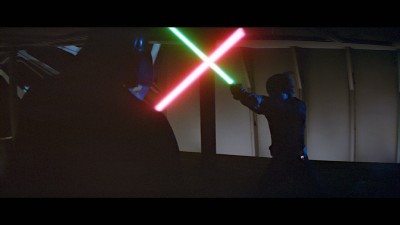 In this final duel between Luke and Vader, we see the culmination of all the physical and emotional struggles they’ve both been dealing with for years. Everything is at stake. Will Luke be able to turn Darth Vader and bring him back to the light side of the Force? Or will Emperor Palpatine finally succeed in turning Luke to the dark side, usurping his father’s place as a Sith lord?

We see that whether Luke Skywalker has joined the dark side or not, he has learned quite a bit from Vader. He has learned how to utilize emotions in a fight. Luke puts away his lightsaber as frequently as he can, and constantly lets his guard down. Vader gets actively agitated by this, because it makes him realize his hesitation. It completes a cycle. In this fight, the student Luke becomes the master of both physical and emotional fighting. In this fight, evil shows its truly good core.

Did we pick the very best duels, or did we miss your favorite Star Wars face-off? Let your Geek Sideshow and let us know in the comments!

Recreate all of your favorite movie moments and showdowns when you browse Sideshow’s full galaxy of Star Wars collectibles.