What do you imagine the face of Death to be? This tough question was the impetus of a design odyssey for Court of the Dead creator Tom Gilliland and the design team here at Sideshow. As it turns out, Death has many faces – and a mask for each one. Death (or, the Alltaker, as we call him in the Underworld) has a dynamic face that is constantly evolving to reflect who he is and what challenges he struggles to overcome.

The faces of the Alltaker exist in many mediums. In the realm of 2D, you will find Death’s masks in concept art throughout the Chronicle of the Underworld book. In our art print program, you will find the faces of the Alltaker in traditional paintings, digital renderings, and even letterpress! In three dimensions, you will discover the Alltaker’s faces in our Premium Format™ figure line, and newly celebrated in the first wave of our debut 1:4-scale mask replica collection. We have several life-sized art studies exploring the Alltaker’s masks as they might appear if you met him in real life. Behold these marvels for yourself at our booth at San Diego Comicon this year! (We are bringing a bit more of the Underworld through the Veil this year.) We even have one flesh-and-blood living piece, emblazoned in ink on the forearm of Court of the Dead creator Tom Gilliland himself. 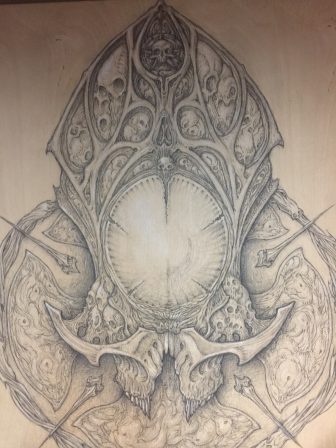 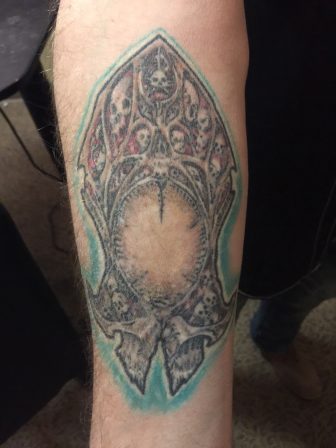 Regardless of whether we are wielding ink, clay, or graphite, we strive to tell a story with our designs. And of all the storytelling mediums, there is perhaps none more impactful than language, with which we can transcribe a story directly in the reader’s imagination. We have a series of new publishing products through which you can really get to know the being behind the mask – Death himself. If you dare – read on for a survey of all of the faces of the Alltaker (so far) and an exclusive sneak peek of where a select few will be making an appearance in the world of storytelling…

This is the Alltaker’s most quintessential visage. The warped, anguished features signify the imbalance that he sees in the world, and the many elements that he must unite in order to restore balance to it. The asymmetry and lack of eyes foreshadow the Alltaker’s strengths, and how those very strengths become traps he has to avoid in order to rise up against the celestial realms. You’ve probably already seen this mask featured in our Death: Master of the Underworld Premium Format™ figure. If you have pre-ordered this figure and are “waiting for Death,” we have a forthcoming publishing project to help you bide the time… and to get you better acquainted with the Alltaker on much more personal terms. Below is an exclusive preview of an image from a special project, due to be released this summer: 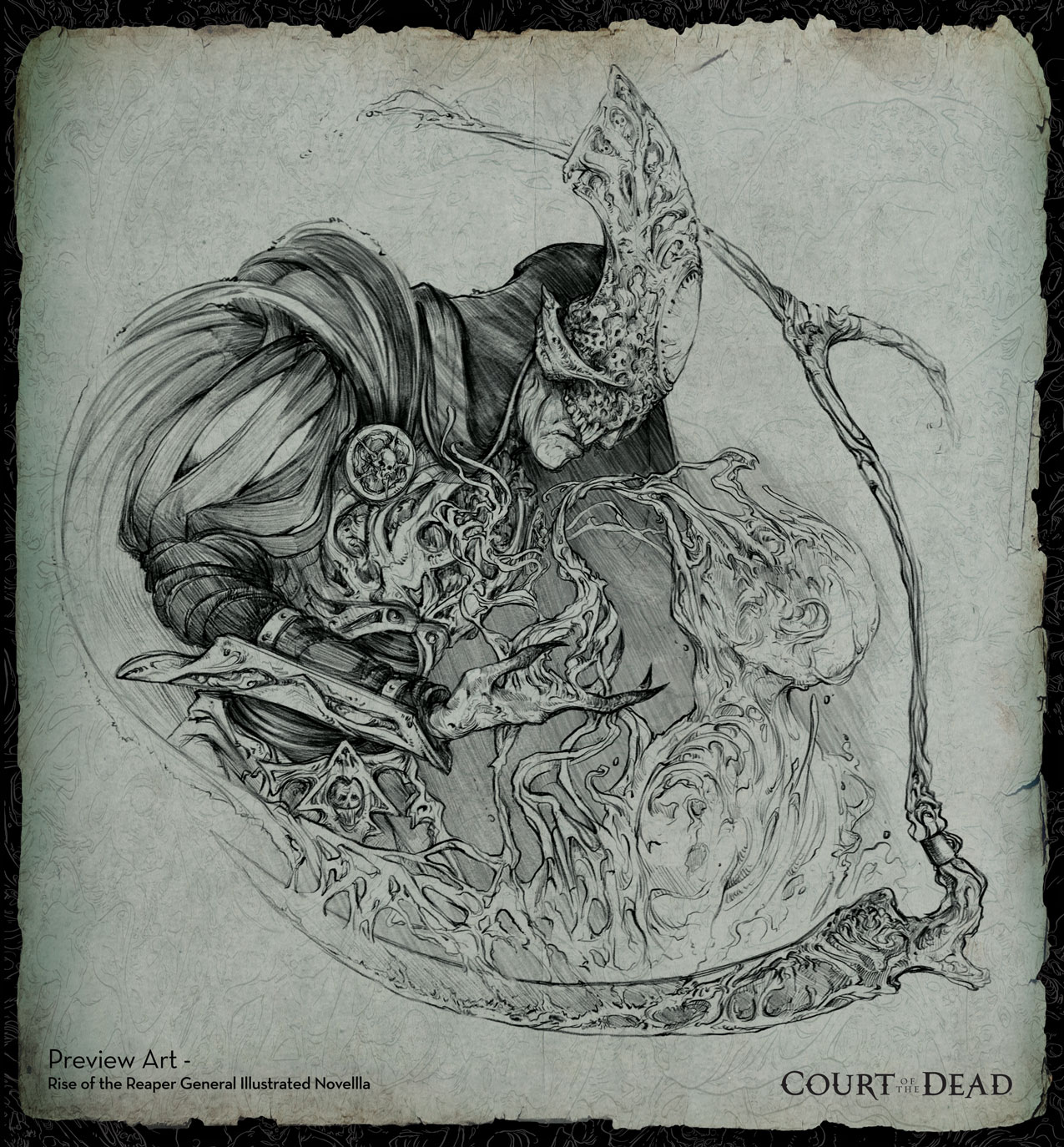 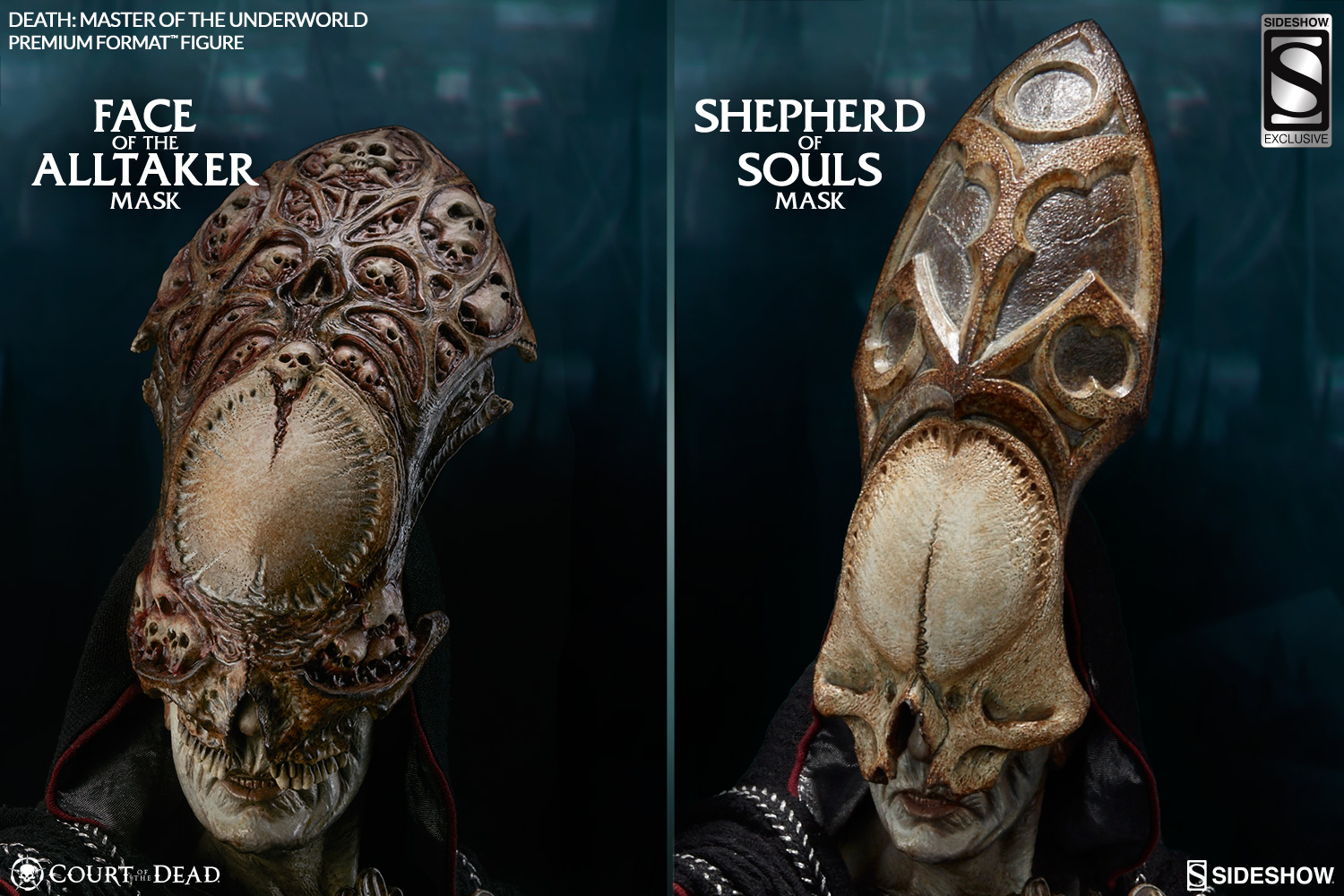 A stark and elegant mask for the blind adjudicator of a Dark Deed. The Alltaker shepherds souls from the Mortal Realm to the Celestial Realms of Heaven and Hell, where they are used as fuel in their senseless, savage war. The Alltaker bears the yolk of this heinous duty with unashamed yet compassionate resolve, with the hope that he can someday re-make his role in this imbalanced universe. He wears the Shepherd of Souls masks when he must meet with the celestial overlords to discuss their due. This Shepherd of Souls mask is (to date) only available with exclusive version of the Death Premium Format™ figure.

Death is the grandfather of all the factions, having created the beings that founded them. When the Alltaker created Xiall and Tsingvath – the creators of the Bone Faction – he sought to explore the harmony achieved through logic, reason and order. Death knows the way of Bone is a delicate balance: Heavy is the crown upon the head in such a system, to walk the knife’s edge between accord and empire.The Ossein Unity mask is the first to be available in the 1:4 scale mask replica collection, but this striking mask also makes an appearance in an upcoming Rise of the Reaper General illustrated novella that chronicles the origin story of one of the Underworld’s most beloved reapers, Demithyle. Check out a sneak peek here: 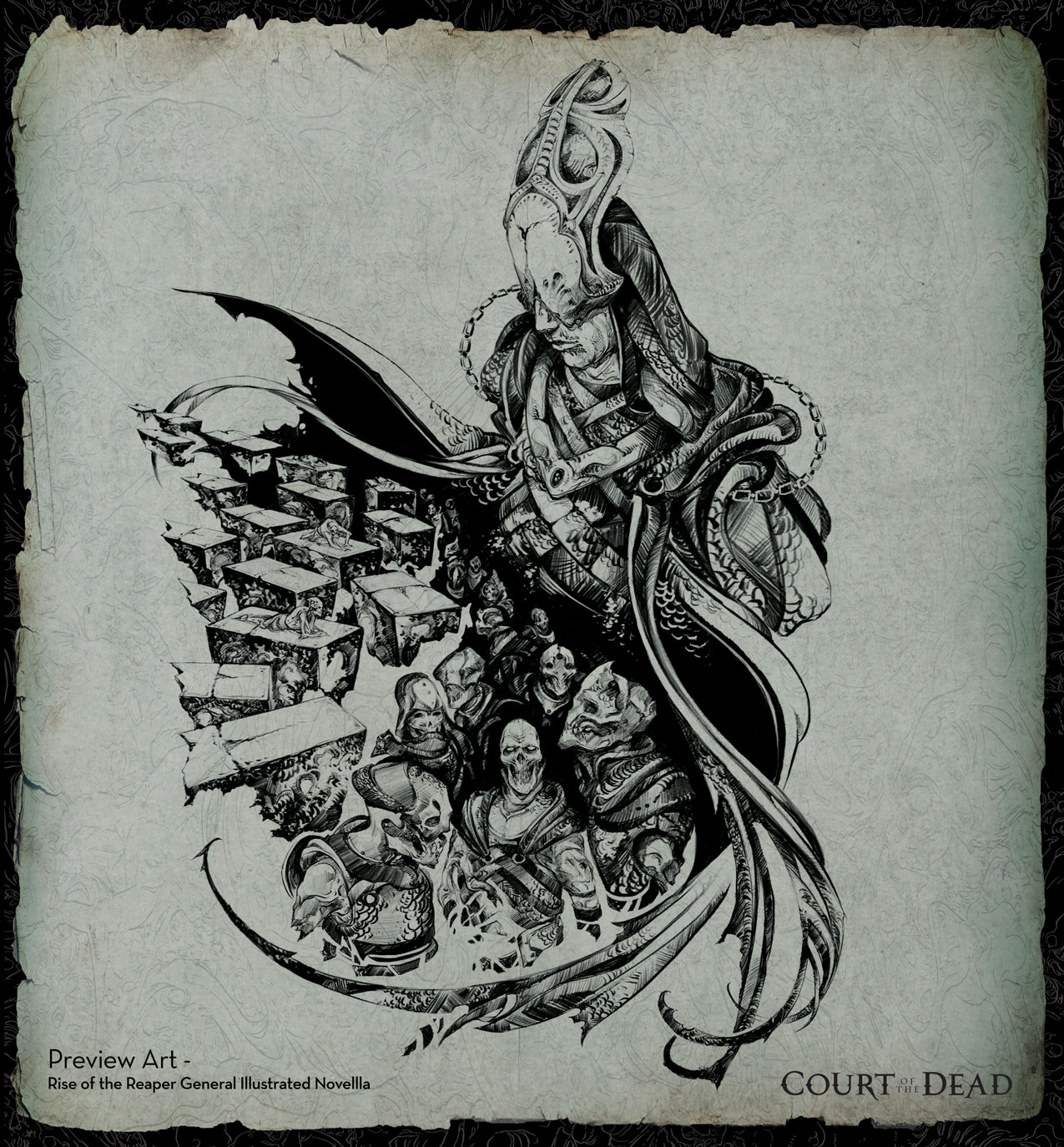 Chorus of Souls and Echo of Five Nails

The Chorus of Souls and Echo of Five Nails are the next two masks in the 1:4-scale mask replica collection. To date, only concept art of these two masks has been released. Both of these designs reflect “primitive” versions of the Alltaker’s masks, from when the realms were newly-made. The chorus of souls called to the Alltaker from the Mortal Realms. His pity drew him there, but his curiosity transformed Death’s opinion of the soulborn who resided there. He saw that they could be more than just sheep, providing fuel for the  celestial war. The Echo of Five nails is a sketch, of sorts, that Death himself wrought in iron and cloth and bone. It represents a haunting vision that he has lived with since his making, and as yet has but a minor inkling as to its significance…

Death has many faces, and there are many more yet to come. Whether they are expressed in concept art, polystone or just with words – these myriad aspects of the Alltaker are all clues to how he will unite the Underworld to Rise, Conquer and Rule!