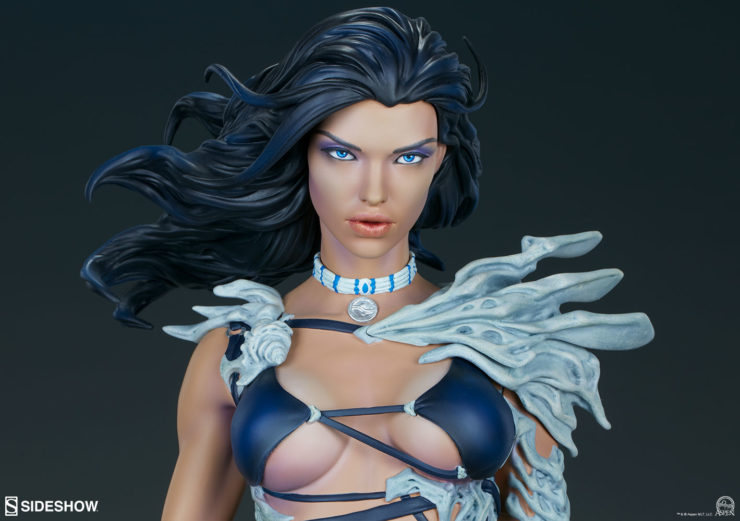 Michael Turner would grow to be a well loved artist in the comic book industry, working for both Marvel and DC Comics. All the while, he published his own stories of Fathom and Soulfire, both of them proving to be gripping and severely underrated stories filled with magic, epic worldbuilding, and memorable protagonists.

Who is Aspen Matthews? What’s her story and what exactly are her powers? 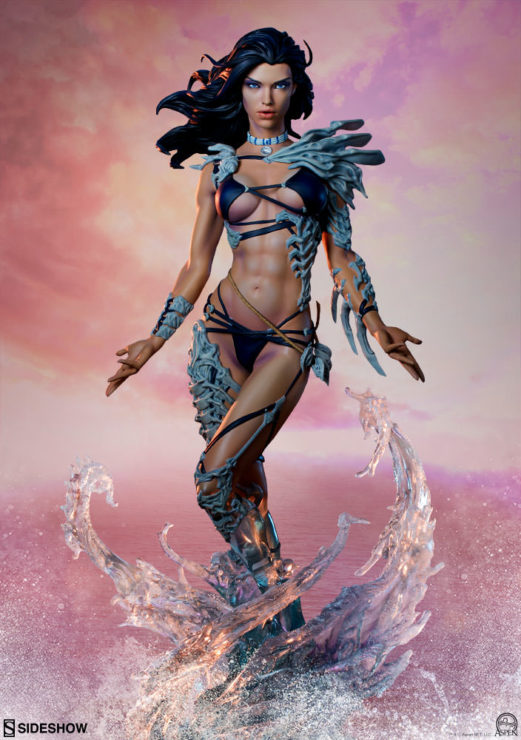 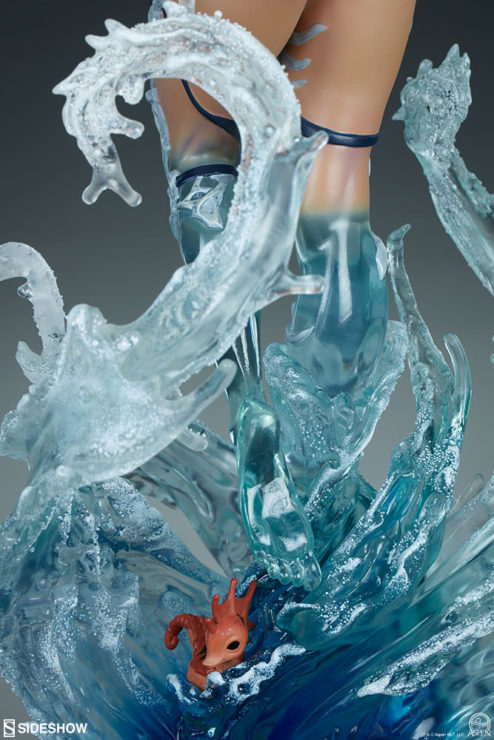 She was always drawn to the water, and when she was only fifteen she made it to the 1988 Olympics in Korea for swimming. She shattered a world record by thirty seconds, and the Olympic committee decided to test her for drugs. Even though she tested negative for drugs, they found that she had five times the regular amount of oxygen capacity, and banned her from ever participating in the Olympics again. After having her first plans ripped out from under her, she adapted, and became a marine biologist.

Aspen was hired by a research department of the government based out of an underwater research facility called Deep Marine Discovery (DMD). There, they were holding a strange alien ship along with an alien prisoner named Killian. Just as Aspen Matthews met Killian, the entire DMD station was attacked and destroyed, leaving few survivors.

Later, Killian kidnapped Aspen and told her about her foggy past. Killian told her than Aspen is not human but actually a member of the race of the Blue, an advanced underwater species, with powers and abilities unlike anything she’s ever seen before. Not only that, but for some unknown reason, Aspen Matthews was more powerful than the other Blues.

Killian convinced her to help him power a series of weapons called the “Blue Sun” to fight against the humans, since the humans unknowingly destroyed a Blue city with a hydrogen bomb test. The powerful energy bursts erupting from the “Blue Sun” would be enough to destroy the human race. Only when Aspen meets Killian’s daughter Kyla does she realize she’s being manipulated and refuses to harm anyone. By the time she realizes that she wants to deactivate the weapon, it’s too late. Killian actives the Blue Sun while Aspen is standing right under the energy beam.

For a moment, it seems that all hope is lost, as everyone thinks that Aspen was killed by the beam. But in a brilliant moment of triumph, Aspen emerges from the beam unharmed, furious as ever. She uses her immense power to destroy the Blue Sun weapon, and ends the war… for the time being.

Aspen Matthews is the fine balance between worlds. She is the balance between humans and the Blue. She tries to keep both safe, and hopes to defend the people she loves from either sides of the war. But there are more wars than even the Blue realized. Brewing in the depths of the ocean, another race called the Black plan their attack. Their leader, Rahger, reaches out to Aspen Matthews and tells her of their existence.

The Black are an old race that the Blue thought were a myth or maybe the old gods. In a way, the Black are gods compared to the Blue. The Blue came from the Black, and the Black are much more powerful. The Black had been lurking far away from all other civilizations for millennia, but they were dying out. So Rahger planned a way for their race to survive: Aspen. Ragher reveals that he is Aspen’s father, and that Aspen is half Blue and half Black. This is why she is so powerful. He tells her that it is her destiny to carry on the race and his plans. He, too, wants to use her power to fight against the humans, but she refuses to be manipulated again.

Through her adventures, she maintains the balance between all of these worlds as best she can. Through everything, she proves to be increasingly intelligent, powerful, and compassionate. 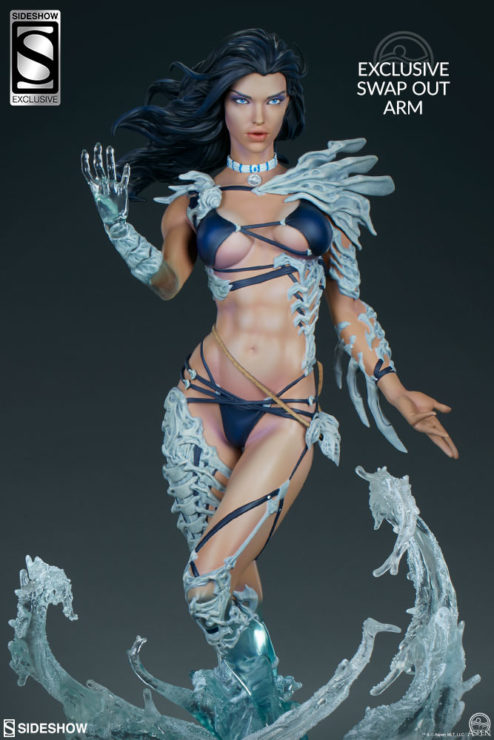 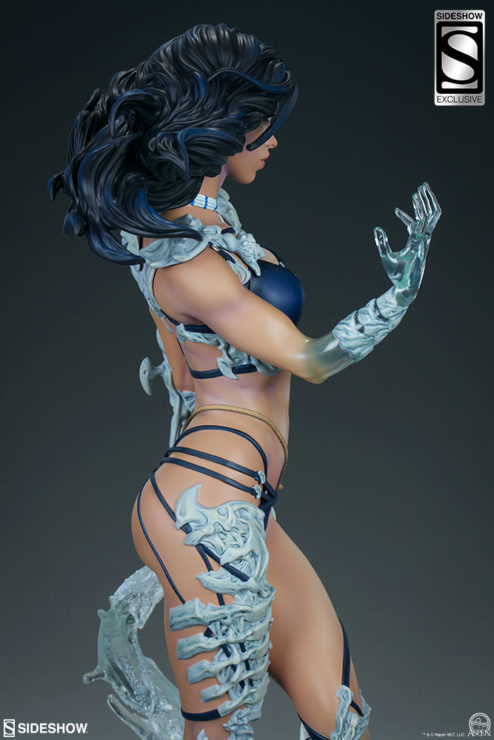 Aspen has inherited powers from both sides of her ancestry, so she has the powers of both the Blue and the Black. Since she is able to combine the abilities and powers of both races, she is arguably the most powerful of them all. Let’s dive in to all of her abilities.

Aspen Matthews‘ most prominent ability is the ability to turn her body into pure water. In this form, she cannot take damage at all. Not only that, but she can move like a liquid and fit through any space. This is the ability that all Blues have. However, since she is part Black, she can also form her body into pure energy. When she uses both of these powers, she becomes an impossibly powerful and indestructible being.

Aspen is also able to manipulate water to a greater degree than any other Blue or Black. The ocean often simply changes based on her mood. She can create tsunamis in an instant just based on her rage alone. She can control the tide and call in storms. Aspen can also condense water and make it into solid objects. She can freeze the ocean at will, seemingly with no limit. Her ability to control water is not limited to the ocean, though. She can even control the blood in someone’s body, as the body is made up of primarily water.

As a Black, Aspen Matthews can heal herself from any wounds in minutes, no matter how bad they are. Even under the Blue Sun, she was able to completely reconstruct her body from nearly nothing. She can control, absorb, redirect, and shoot out energy. She is also telepathic. And of course, she has incredible strength, speed, reflexes and more.

The limits of her powers are unknown, especially as we learn more and more about her origins and the Blue and the Black.

What’s your favorite Michael Turner story? Did you already know about Grace from Soulfire and Aspen Matthews from Fathom, or are you inspired to read more about these powerful characters?

Let us know in the comments, and don’t forget to Let your Geek Sideshow!