Sorry Admiral Piett, but I couldn’t disagree with you more.

I’ve been hooked on Star Wars ever since the opening scene of A New Hope, when the Empire boarded the Tantive IV. Stormtroopers, droids, and Darth Vader OH MY! By the time The Empire Strikes Back came out I was in geek heaven. Already captivated with the Empire and the Rebellion, then they had to go and introduce us to the menacing looking group of individuals they hired to locate the Millennium Falcon.

Which Star Wars Bounty Hunter are you? Take our quiz and find out!

Without even knowing a whole lot about them, the bounty hunters instantly became some of my favorite characters. They obviously had some of the best weapons, incredibly detailed armor and a presence where just by looking at them you knew they meant business. Since the original saga we have been introduced to numerous bounty hunters with the addition of the prequels and The Clone Wars, and will certainly be able to look forward to more in The Force Awakens. But as it stands right now, here’s my countdown of the best Star Wars bounty hunters: 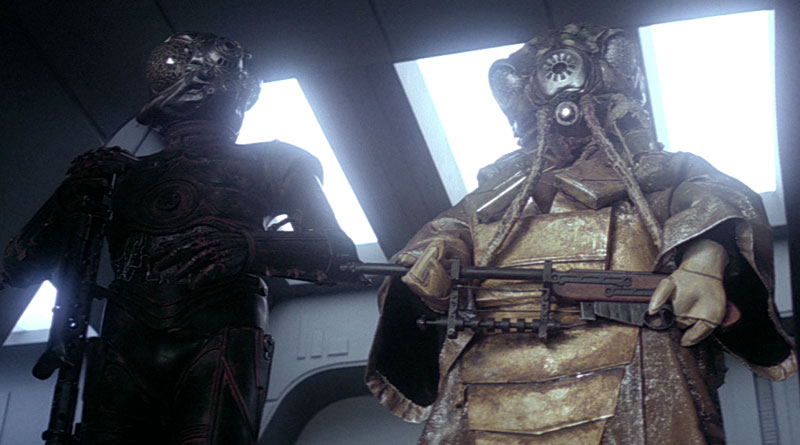 Like many fans, I used to get Zuckuss and 4-LOM confused thanks to the Kenner action figures, which were initially produced with the names reversed (Eventually, it was decided that 4-LOM would be the insectoid-looking droid, and Zuckuss the insectoid-looking alien). Paired up by Jabba the Hutt in an inseparable partnership, they’ve made the list together.

A protocol droid who overwrote his own programming because he was bored with his existence, 4-LOM started out as a master thief, information broker and – after some further altering of his programming – became a successful bounty hunter. Sometime later, I also discovered that 4-LOM was an acronym meaning “For Love of Money.” A droid who loves money? Yeah, he makes the list mainly for that.

On the opposite end of the spectrum, Zuckuss was a Gand whose Force sensitivity allowed him to sense his prey and determine their motives, earning him the nickname ‘Uncanny One’. 4-LOM spent a great many years studying and observing Zuckuss in an attempt to master skills in intuition, despite knowing it was illogical. After the Battle of Hoth, Zuckuss and 4-LOM decided to leave the service of the Empire and join the Rebels. However, these plans were dashed when Boba Fett blew 4-LOM apart. Even though Zuckuss repaired his partner, 4-LOM would never be the same again… 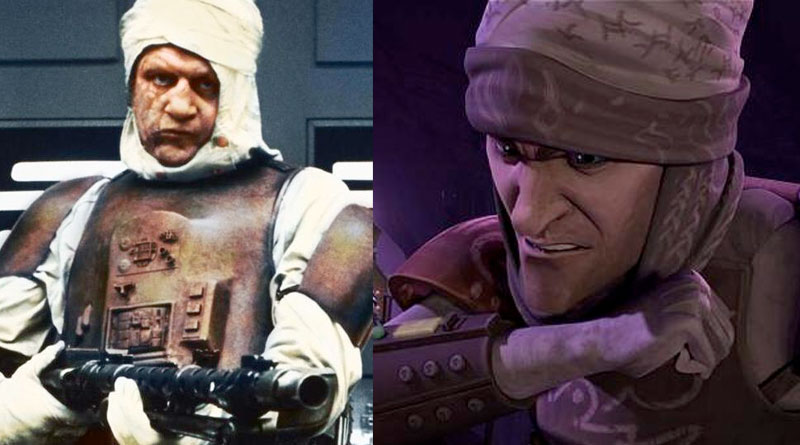 Another one of the original bounty hunters introduced in Empire Strikes Back, Dengar makes the list due to his crude look and bad attitude. Appearing to be wrapped up in bandages, the Corellian bounty hunter was adept with heavy weapons, explosives and hand-to-hand combat, sporting multiple cybernetic implants and very distinctive armor. Though he held a major grudge against Han Solo, like most bounty hunters he could never quite capture or subdue the scruffy-looking nerf-herder. Plus, fun fact: Dengar is voiced by Simon Pegg in The Clone Wars. How cool is that? 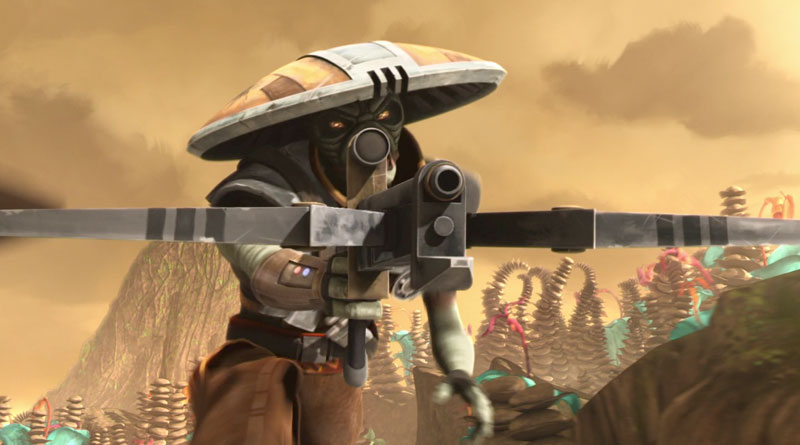 Fast, agile and totally unpredictable, Embo was considered one of the best bounty hunters of the Clone Wars era, second only to Cad Bane. He wore a large, circular hat which he could throw at his prey and which was also strong enough to withstand blaster fire. In my book he gets extra kudos for having a pet Anooba which helped him on his hunts. Originally intended to be killed off after his initial appearance, Embo was so popular with the production crew they held onto to him – and I’d say they made the right choice. He had some excellent moments throughout The Clone Wars series. 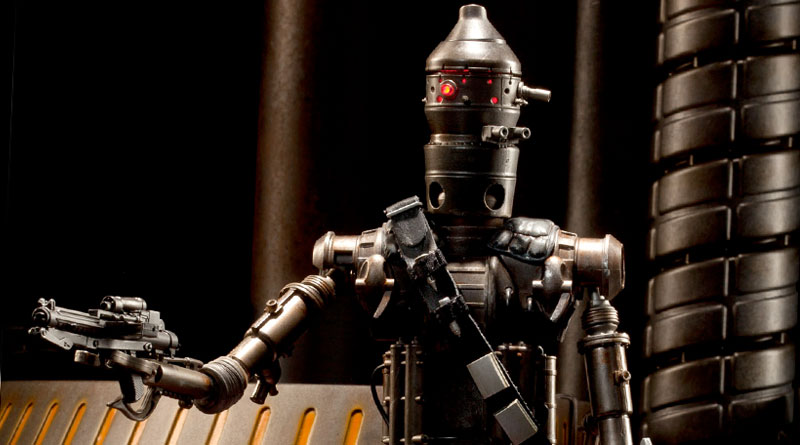 The second and only other droid to make this list, IG-88 earns his rank here because he is simply the deadliest droid in the universe. Beholden to no master, his ruthless and autonomous methods of assassination made him the ultimate killing machine. 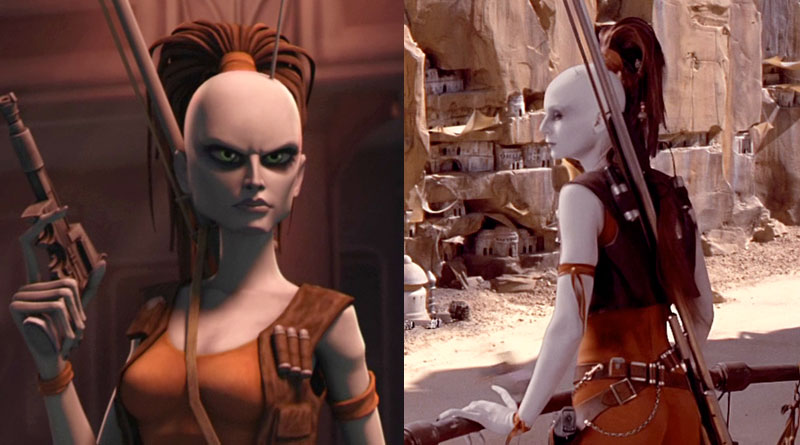 A former Jedi padawan with a tragic childhood, Aurra Sing was as vicious as they come. Capable with blasters, Aurra also carried a red bladed lightsaber into battle. Known as a Jedi hunter, she left bodies across the galaxy to prove it. 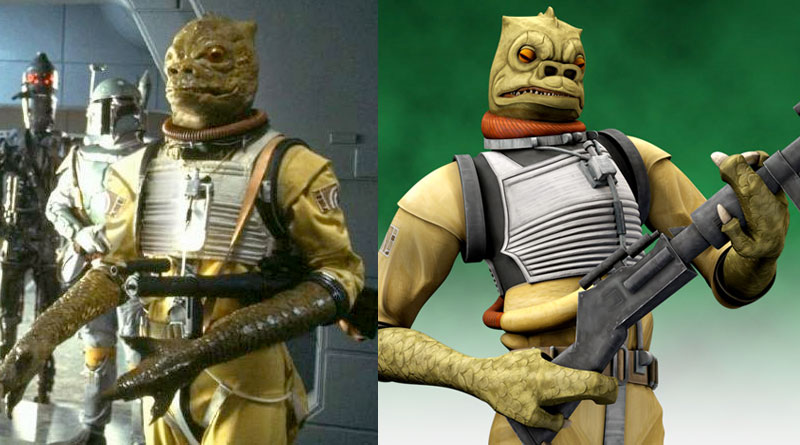 A Trandoshan bounty hunter who’s name literally means “devours his prey,” Bossk was an intimidating hunter who had a particular fondness for capturing and skinning Wookiees. He had no need for armor and was known to be pretty handy with grenade launchers, flame throwers and thermal detonators. What other bounty hunter could hunt Wookiees successfully and live to tell about it? 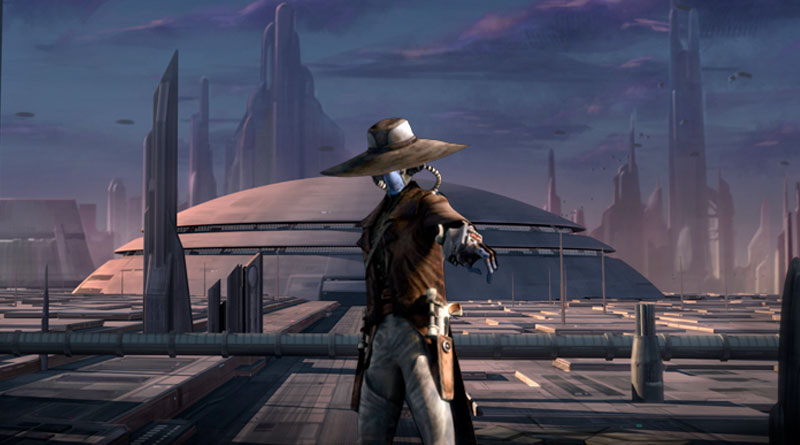 Now we’ve arrived at the guy I like to refer to as the Clint Eastwood of the Star Wars universe. When I first saw Cad Bane wearing that hat and walking around with his cold, calculating demeanor….WOW! Ruthless, merciless and deadly. A master of disguise, no other bounty hunter had more success against the Jedi than he did – and always in style. 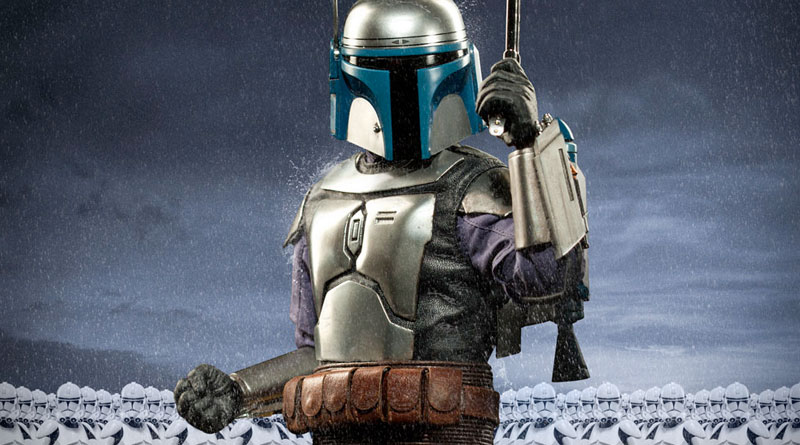 As one of the all-time best bounty hunters in the galaxy, it’s no wonder Jango Fett was chosen to be the genetic source of the entire Republic Clone Army. Sporting blue and grey armor, a jet pack, flame thrower, rocket launcher, blasters and many more dangerous gadgets, he was a force to be reckoned with. And come on, he’s the father of Boba Fett. 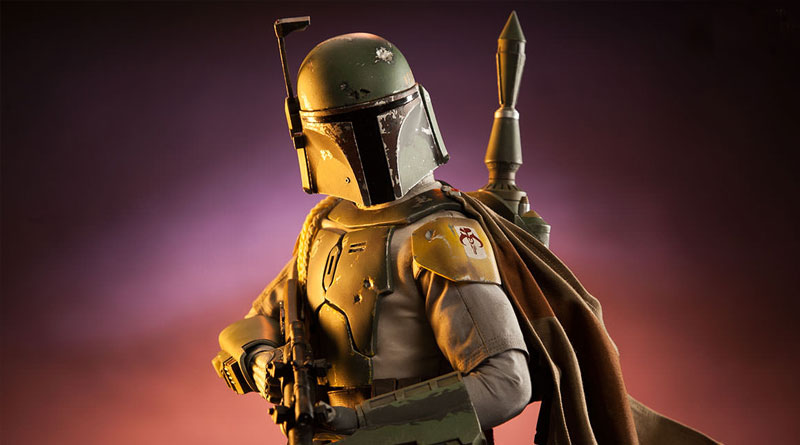 Coming in at #1 is the bounty hunter who, despite having very little screen time, has captured the imagination of every Star Wars fan young and old. Like his father before him, Boba Fett had his Mandolorian armor, rocket pack and Slave 1 ship all add to his overall awesomeness. But everyone knows Boba Fett’s biggest claim to fame will always be as the only bounty hunter ever to capture Han Solo and deliver him to Jabba the Hutt. He’s been my favorite since I first saw him in that Christmas Special cartoon…and now let us never speak of that again.

So there you have it: my personal top 10 Star Wars bounty hunters list. There were so many others I could have added to the list and I’m sure some of you have your own opinions on where they should be on it. I’d love to hear what you have to say. Post here in the comments or send me a tweet @MikeHockjr and as always, May the Force be with you!

Be sure to check out all of our cool Star Wars figures and collectibles, including bounty hunters!!!