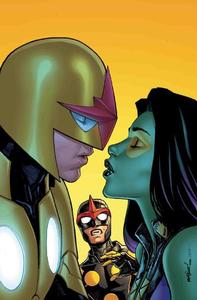 Looking for lovely ladies in the skies? That seems to be where they are nowadays. Not only is Gamora all over the “Guardians of the Galaxy: Vol 2” trailer, but in Marvel Comics she is making her appearance as the love interest of Nova! Sure, it turns out we might have to wait a month to watch the romance unfold, but we can’t help but wonder if an upcoming day of hearts had anything to do with this cover being all over the internet this week. 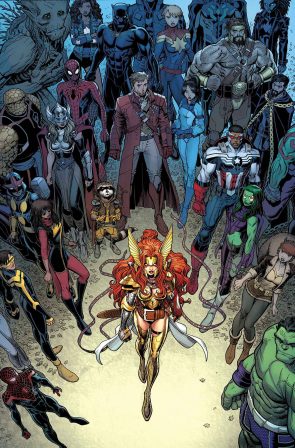 Gamora isn’t the only woman making waves. Turns out our gal Angela is on the cover of “Guardians of the Galaxy #17” (which released TODAY btw, get to your local comic book shop). Now, we are used to Angela fighting in Asgard and throughout space, but it looks like she is grounded on Earth in this storyline.

Eek! Not sure if she’s gonna like that too much. Personally, we want Angela added to the Marvel Cinematic Universe pronto! But who would play her? Hmm…

Well… What are you waiting for? The MCU is headed to space and we are all catching up in the comics, so that we are in the know… and you should be too. Happy New Comic Wednesday!