Geek guide to the best of Netflix – January 2016 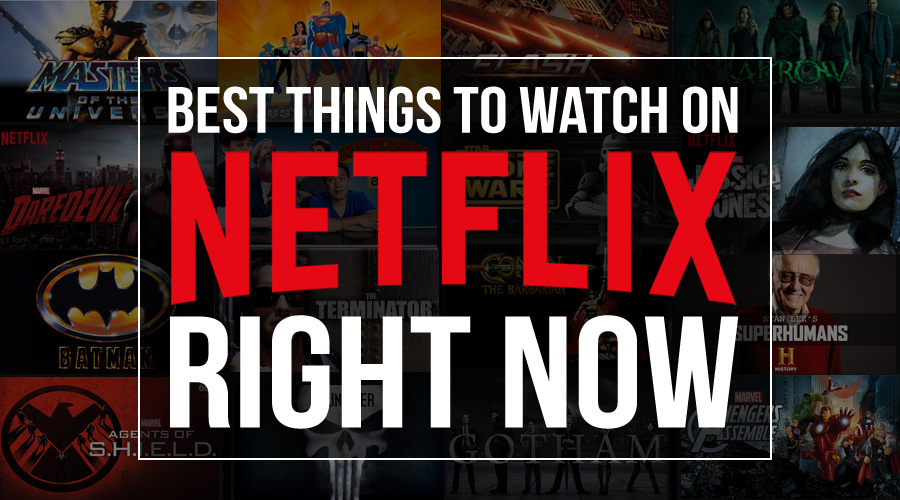 For anyone with a Netflix account, there’s a massive library of shows, movies and documentaries available to stream right now – the trick is figuring out which ones to watch! Save yourself hours of searching with our geek savvy guide to what’s new and awesome so you won’t miss out. From our favorite trending superhero shows, to pop culture classics, hidden gems, and beyond, here are our top picks streaming on Netflix this month. Now go forth, fellow bingers, and enjoy.

The debut Netflix Original series from Marvel is delightfully dark, gritty and action-packed. You know the story: blinded as a young boy, Matt Murdock defends Hell’s Kitchen against injustice as a lawyer by day and as the super hero Daredevil at night. But trust us, you’ve never seen Daredevil like this. And Season 2 is right around the corner!

Perhaps even darker than its predecessor Daredevil, the latest incredible Netflix Original series from Marvel follows Jessica Jones, a former superhero decides to reboot her life by becoming a private investigator.

What can we say, it’s a classic! Starring Michael Keaton as the Dark Knight, Tim Burton’s 1989 Batman started a tidal wave of summer blockbuster superhero movies, and still ranks among the best.

Speaking of Batman… If you thought Gotham was corrupt before, this innovative new series takes you even further down the rabbit hole, revolving around the rise of Jim Gordon as well as the city’s most depraved criminals.

In this series from Joss Whedon, Clark Gregg steps into the spotlight to assemble a top team of S.H.I.E.L.D. agents tasked with investigating bizarre threats, reprising his role as Agent Phil Coulson from The Avengers.

It’s no secret we love director Guillermo del Toro, and his first Hellboy film starring Ron Perlman is one of our favorites. Quirky, imaginative, and hilarious, this is Hellboy as he was meant to be seen on the big screen.

When you think classic sword and sorcery fantasy you can’t help but think of Conan the Barbarian! Good campy fun with a heavy dose of violence and gore, don’t miss Arnold Schwarzenegger’s breakout role as Conan, in this 80’s cult classic adventure.

Big Trouble in Little China (1986)
One of our all time John Carpenter and Kurt Russell team-ups, Big Trouble has it all with equal parts action, comedy, sorcery, and monsters. A fun and elaborate FX-laden spectacle, it’s easy to see why Big Trouble has amassed a huge cult following.

Escape From LA (1996)
Get a back-to-back dose of John Carpenter and Kurt Russell with Escape from LA. Russell dons his eyepatch again as the iconic Snake Plissken, in this crazy sequel and epitome of popcorn flicks. If you don’t have the time (or stomach) to watch the whole thing, promise you’ll at least skip to the classic tidal wave surfing scene (1:07:30).

Between showings of The Force Awakens, get your Star Wars fix at home with episodes of Star Wars: The Clone Wars. This critically acclaimed animated series weaves a rich narrative over six seasons.

Based on the arrow-slinging superhero from DC Comics, all we can say is bring on Season 4!

In one word, this series is fun. Although at times it ventures a little bit on the cheesy side, The Flash has got everything you could want from a superhero saga, with compelling storylines, characters, and special effects. If you like The Arrow, you will love The Flash!

With the help of a magical key, He-Man and his allies fight back against Skeletor who has taken over Castle Greyskull and captured the sorceress. Dolph Lundgren and Courtney Cox star in this amazing fun and campy film based on the animated series.

If you haven’t heard of Kung Fury drop whatever you’re doing and take 30 minutes to watch it right now. You can thank us when you’re done. If you happen to have seen this glorious masterpiece already, consider this your reminder to watch it again. You’re welcome too.

From creators Bruce Timm and Paul Dini (who brought us Batman the Animated Series), this excellent animated series is colorful, heroic, and unabashedly imaginative. If you’re a fan of superheroes and the DC Comics universe, Justice League is a must watch.

This is it – the film that started it all. Arnold Schwarzenegger makes his debut as the Terminator, a killer cyborg from a post-apocalyptic future in James Cameron’s original sci-fi classic, The Terminator.

As Daredevil and Deadpool pave the way to re-introduce the Punisher and bring his character justice, don’t miss this opportunity to revisit this early incarnation of Frank Castle on the big screen.

Also on the geek roster of what’s coming in January to Netflix, you may be interested in these titles:

From Dusk till Dawn: Season 2

So, what have you been watching on Netflix lately? Did we miss any essential recommendations? Tell us in the comments below!

Rev up those chainsaws horror fans, for the Ash Williams Sixth Scale Figure from Evil Dead II: Dead by Dawn