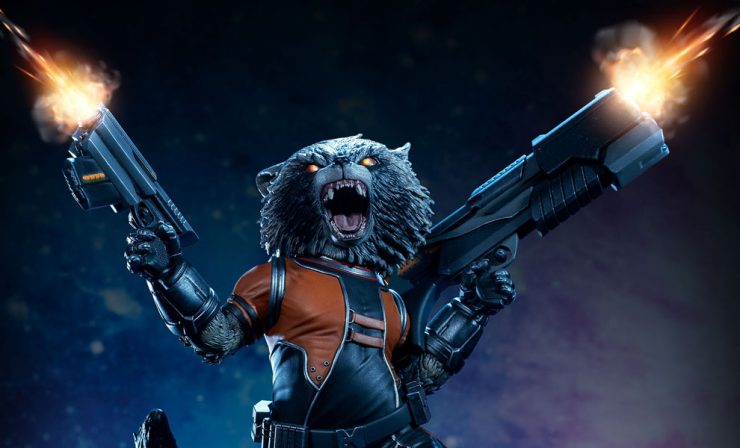 The story of Rocket Raccoon goes back nearly 40 years to his first appearance in Marvel Preview #7 in a story called “The Sword in the Star.” And although Rocket only made a few cameos in comic books after that, his charismatic appeal and movie appearances now have him starring not just on our movie screens, but also on merchandise shelves, in comic books, and on t-shirts.

But what secrets does Rocket’s long history hold? What are those details about him that makes him so interesting and so utterly lovable?

30 YEARS AFTER HIS CREATION, HE ONLY APPEARED IN 10 COMIC BOOK ISSUES 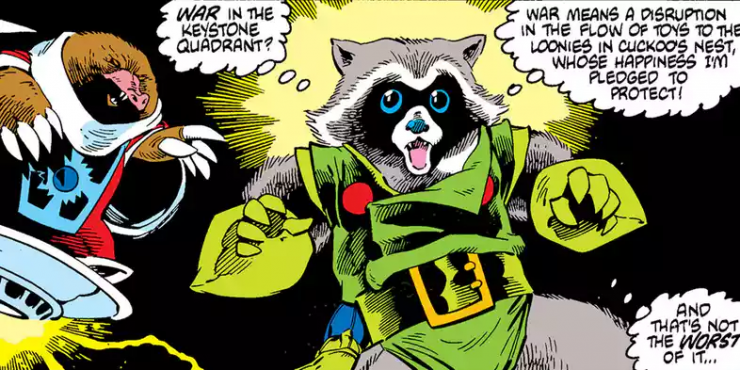 It’s hard to think of a time when no one really knew who Rocket Raccoon was, but in the nearly 30 years after his creation, he only actually appeared in a total of ten comic books.

Although he first appeared in 1976 as a raccoon named “Rocky,” it was nearly ten years before he would appear again in The Incredible Hulk #271. He eventually got his own four-issue mini-series in 1985, followed by an appearance in Quasar #15 and in three issues of Sensational She-Hulk.

Rocket was actually only meant to serve as a one-off character, but Marvel writers and artists kept bringing him back for more stories. Now, he’s an official member of the Marvel cinematic universe, both in the movies and the comics…

HE WAS INSPIRED BY A BEATLES SONG 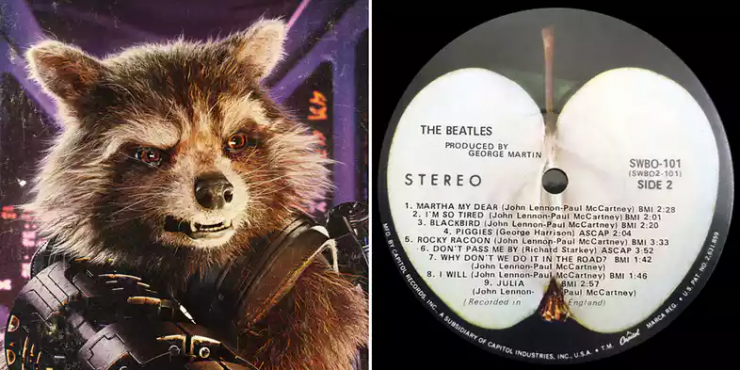 The Beatles song, “Rocky Raccoon” first appeared on the Beatles title album in 1968. The song is about a boy with a cowboy mentality who seeks vengeance on the man that stole his girlfriend away. This is why Rocket’s name was Rocky Raccoon in his first issue, with his co-creators being big fans of the British band.

Although Rocky became Rocket in The Incredible Hulk #271, the creators continued to refer to the song in that comic book with its title: “Now Somewhere In the Black Holes of Sirius Major There Lived a Young Boy Named Rocket Raccoon.” In the story, Rocket and Hulk team up to prevent the theft of something called “Gideon’s Bible.”

In the song, the lyrics read: “Now somewhere in the Black Mountain Hills of Dakota there lived a young boy named Rocky Raccoon” and the Gideon’s Bible is mentioned as a source of comfort for Rocky. 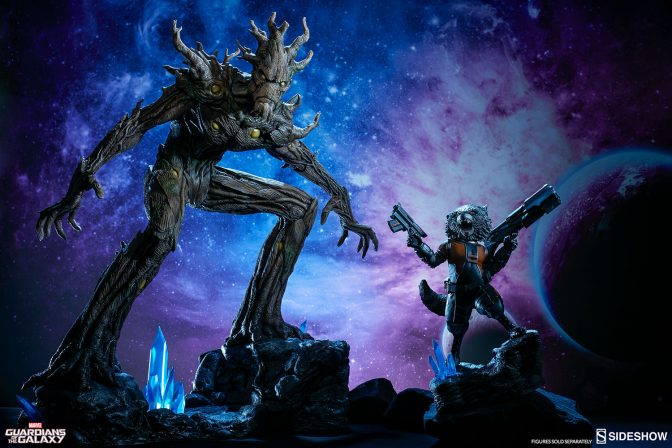 Groot can only speak three words: “I am Groot.” And yet, depending on the inflection and tone of voice, these simple three words are actually the language through which Groot communicates. It’s a language, though, that no one can understand because it really is the same statement over and over. And yet, Rocket always seems to understand what Groot wishes to say.

At first, it just seems like Rocket makes up whatever Groot intends with his words, but the truth is that Rocket really understands Groot’s strange language. Because Rocket has spent more time with Groot than anyone else, he understands all the nuances of the words and the way Groot says them.

HE WAS CREATED BY ROBOTS 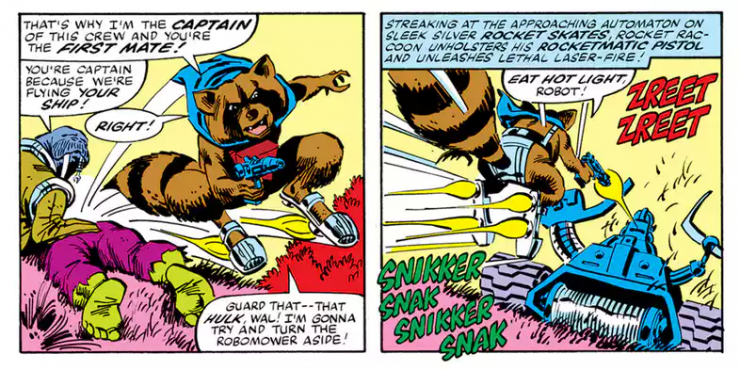 Obviously, Rocket isn’t the kind of creature that would occur in a natural environment. Instead, he started life out as a simple raccoon who got genetically engineered by robots who used leftover pets as a way to take care of insane asylum patients. Rocket was basically a scientific experiment developed by the robots, which means that he probably also has a longer lifespan than most raccoons (and possibly some humans).

This, obviously, makes Rocket different from just about everyone he knows, which lends itself to that part of his personality that seems bitter and jaded. Fortunately, Rocket eventually escaped his creators and ended up as a hero and part of the Guardians of the Galaxy team.

HE ONCE WORE ROCKET SKATES 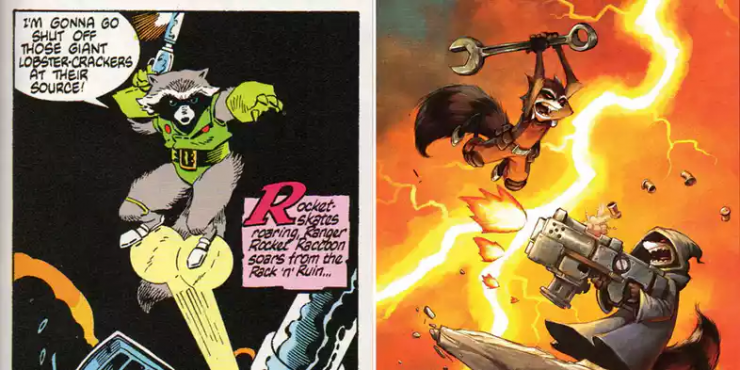 Although Marvel fans are most familiar with Rocket’s jetpack, he once actually used rocket skates to launch himself into the air. This was back when he wore a costume almost similar to what one might imagine on a superhero (complete with blue short shorts and a cape). Although fans today are used to Rocket’s gigantic weapons, at the time, he only had a small pistol.

The rocket skates allowed Rocket to soar through the air and come crashing down on his enemies. Perhaps the cape was for slowing his descent. Or maybe it was purely decorative.

Rocket eventually got a redesign and began to look more like the grumpy, yet lovable raccoon fans adore today. Although he started out as a cute, talking animal character, he became something a lot more tough.

HIS SOULMATE IS AN OTTER 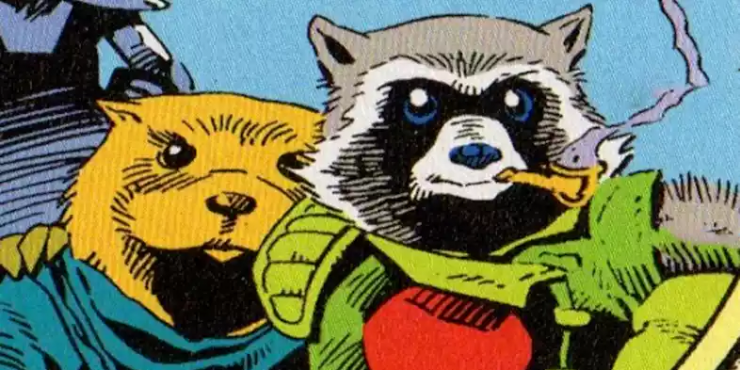 True love doesn’t know the boundaries of species, at least in comic books. Rocket’s special romantic interest was an otter named Lylla, another anthropomorphic creature from outer space. But Lylla isn’t just any otter; she’s also the heiress to a large toy-making company on Halfworld, the planet both Rocket and she came from.

HE GREW UP IN AN INSANE ASYLUM 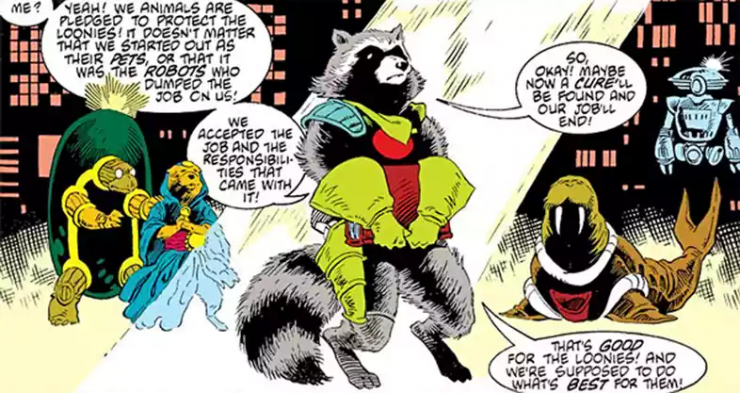 Rocket comes from a planet called Halfworld. This world was basically a gigantic insane asylum meant to take care of the “Loonies.” After funding for the asylum got cut, the doctors fled the planet and left the robots in charge of the “Loonies.” The Loonies procreated and created many more of their kind.

The robots decided that they didn’t want to deal with all those crazy people roaming around on their planet. They began to experiment on some of the pets left behind by the doctors in hopes of creating a group that could take care of the patients for them.

One of those experiments was Rocket Raccoon. Not only was he the result of some horribly painful genetic experiments done by robots, but he also grew up among the Loonies in the asylum. 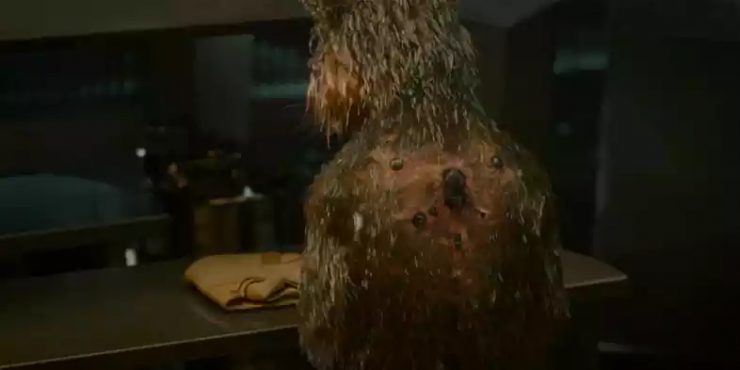 In the Guardians of the Galaxy movies, scars cover Rocket’s body. Although the movies give little explanation about what those scars are from, they are actually a nod to his origin story in Marvel Comics.

In the comic books, Rocket started life out as a raccoon, but the shape of a raccoon’s body is drastically different from that of a human’s. In order to create a raccoon that can walk upright, Rocket endured many painful surgeries that changed the shape of his body. He also was the subject of many genetic experiments to turn him into an anthropomorphic creature.

There is a shot of Rocket in the first Guardians of the Galaxy movie without his shirt on. The scars seen on his back are a result of the experiments done on him by the robots on Halfworld. 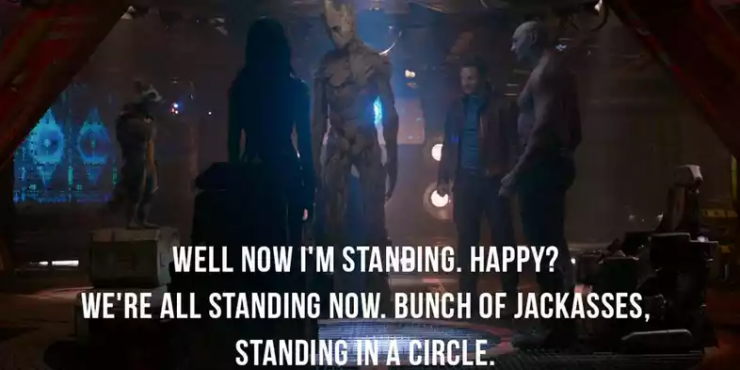 One of the best lines of the first Guardians of the Galaxy movie involves Rocket saying, “Happy? We’re all standing now. Bunch of jackasses, standing in a circle.” This line had fans laughing, but what they might not know is that it wasn’t ever in the script.

The actor behind Rocket’s gestures and movements was Sean Gunn, brother of Guardians of the Galaxy director James Gunn. During this particular scene, that line came to Sean in a moment of improvised brilliance. The line was so good that the director made sure to keep it when Bradley Cooper did the voice for the character.

It’s such a perfect line, too, because it really does sum up Rocket’s character: grumpy, yet hilarious. This line gets quoted again and again by fans of the movies.

HIS MOVIE INSPIRATION WAS A REAL RACCOON NAMED OREO 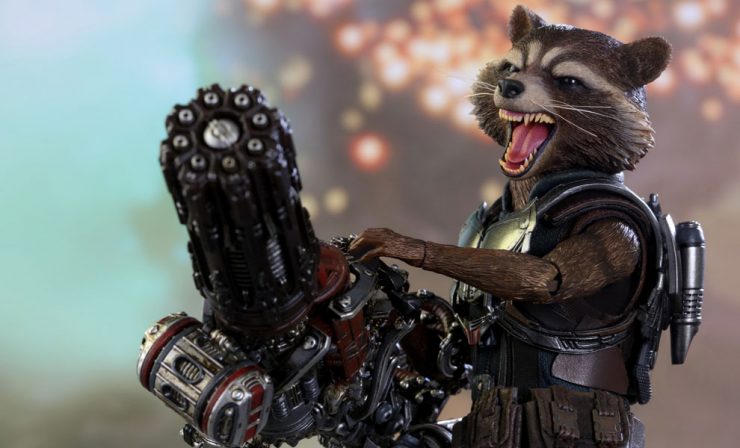 Marvel wanted to make sure that Rocket looked as realistic as possible onscreen, especially considering that the idea of a grumpy talking raccoon seemed a little ridiculous. Not only did Sean Gunn stand in for the role of Rocket while filming so that they had all the mannerisms and movement expected of the character, but the filmmakers also looked to nature for inspiration when animating Rocket.

That inspiration was a real raccoon named Oreo. Animators studied the behavior and movement of the raccoon so that they could accurately depict Rocket onscreen.

“Our Rocket is based on a combination of our voice actor, Bradley Cooper, our on-set actor, my brother Sean Gunn, the movements and behavior and look of Oreo [the raccoon], as well as my own animation,” James Gunn said.

AT ONE POINT, HE BECAME THE LEADER OF THE GOTG

Rocket proved that he has leadership abilities during a story arc in the Guardians of the Galaxy comic books called “Annihilation.” Although that role usually belongs to Peter Quill, aka Star-Lord, this story had Star-Lord sent to a place called the Negative Zone by Ronan.

Disheartened, the rest of the Guardians nearly broke up, at least until Rocket took up the mantle of leadership and rallied everyone around him. Not only did he bring the team back together, but he also added Groot to the line-up. He ended up leading the charge that rescued Star-Lord from the Negative Zone.

Of course, after that, Starlord took up the role as the team’s leader again, but fans can never doubt that it was Rocket who kept the team together during a very difficult time.

HE HAS A CONNECTION TO THE HULK 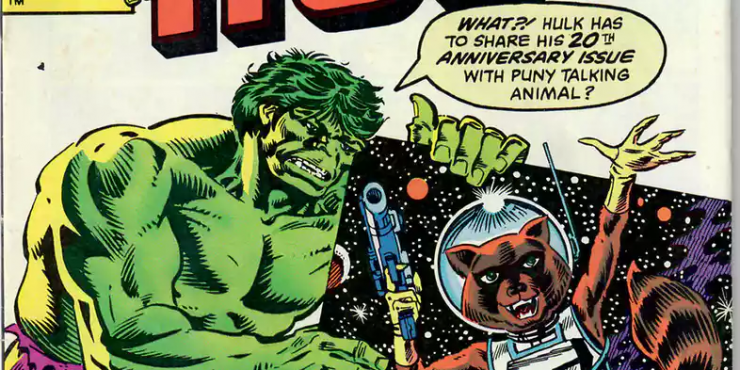 It might seem like an odd team-up, but Marvel is known for bringing many of its characters heroes together in its comic books. So maybe it isn’t a huge surprise that Rocket actually has a connection to The Hulk. One of Rocket’s few appearances in his first 30 years actually happened in 1982’s The Incredible Hulk #271.

This issue celebrated 20 years of of that title. Rocket Raccoon co-writer Bill Mantlo wrote a story in that issue that included Rocket, in the version fans are familiar with today, to join in the festivities. In that issue, Hulk ends up on Halfword, the planet where Rocket and his pals all come from.

But the future will probably feature an even bigger Hulk connection. In the upcoming Avengers: Infinity War film, the Guardians of the Galaxy will team up with The Avengers.

Warning: there are spoilers ahead…

HE AND GROOT DIED IN SECRET WARS #1 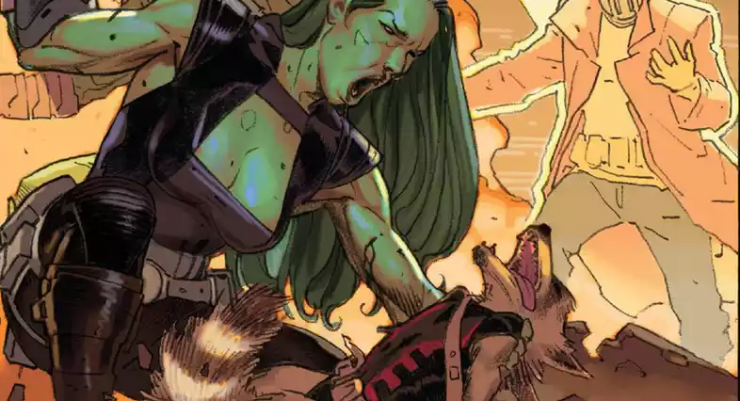 In Secret Wars, the Marvel 616 universe combined with the Ultimate Marvel 1610 Universe for an all-out “the galaxy is at stake” war between the two universes.

Needless to say, that war doesn’t go well and both universes ultimately get destroyed. But there are small pieces of both universes that somehow remain. These pieces combine to create something called the “Battleworld” – and this world is a brutal one.

In the first issue, the first blood of the story gets spilled when Rocket, Groot, Black Bolt, Black Widow, Spider-Woman, and Beast are all killed by the Children of Tomorrow as Stark Tower gets destroyed.

Need a gun-totin’ trash Panda for your collection? Sideshow has got you covered, with a selection of Guardians of the Galaxy products HERE.

This article originally appeared on Screenrant: Guardians Of The Galaxy: 15 Things You Didn’t Know About Rocket Raccoon.

Are You Ready to Defend? One Week Until Marvel's The Defenders is on Netflix!