How the Guardians Of The Galaxy Team Could Change in Vol. 2

Star Lord, Drax, Groot, Rocket and Gamora. Part of the reason behind the huge success of Guardians of the Galaxy was the chemistry resonating off that central quintet. Essentially five misfits who, for various reasons, had lacked the warmth of a loving and supportive family in their lives, the group begins tentatively before finally uniting to defeat the villainous Ronan and save the planet Xandar before jetting off to do something good, something bad and a bit of both.

By the end of the movie, the five Guardians truly felt like a tight-knit family unit with an ‘us-against-the-world’ attitude and although it may seem strange to imagine the core members changing, it’s a distinct possibility that the set of Guardians that go into Vol. 2 won’t be the same set that come out. This notion was hammered home by the film’s Super Bowl trailer, which depicted Yondu, Nebula and new character Mantis with equal standing to the five primary Guardians and the clip’s final shot focuses on all eight figures standing tall together.

Guardians of the Galaxy Vol. 2 promises both a raft of new characters and an increased focus on some familiar faces from the first movie and a handful of these are certainly in with a shot of joining the Milano crew. Notable additions to the cast are Kurt Russell as Ego and Pom Klementieff as Mantis, and both of these characters are likely to be central to the sequel’s plot, with Mantis already having a prominent spot in the movie’s initial trailer. Additionally, it has been confirmed that Yondu the Ravager will have a prominent part to play, and Michael Rooker’s character has featured heavily in the promotional material. Director James Gunn has also stated that the sequel will further explore the relationship between adoptive sisters Gamora (Zoe Saldana) and Nebula (Karen Gillan) and after their battle in the previous movie, it seems the duo are on friendlier terms this time around. 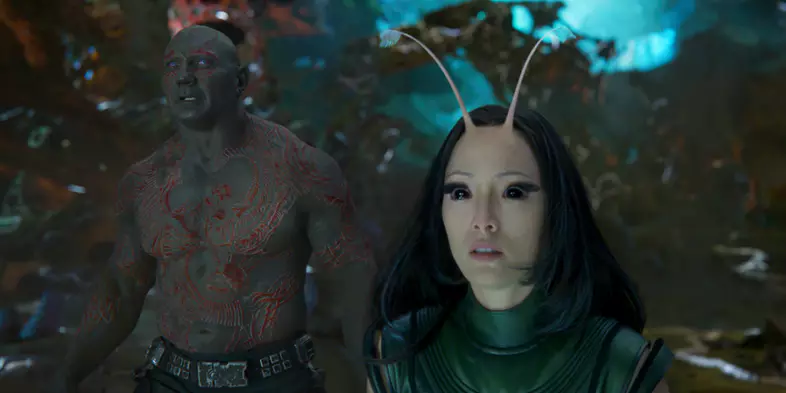 Mantis’ interaction with the Guardians was one of the highlights of Guardians of the Galaxy Vol. 2‘s first trailer. The hilarious exchange showcased the character’s ability to read emotions via touch, and she seemed immediately compatible with the rest of the group. Said to have been raised by Kurt Russell’s Ego, Mantis is portrayed in the Marvel comics as a proficient fighter and on several occasions has been a member of the Avengers (who hasn’t?), and also has comic history with the Guardians of the Galaxy themselves. Mantis has both been an official member of the Guardians and also refused a later offer to join the group, but has always been on good terms with Peter Quill, whom she has worked with on several occasions outside of her Guardians duties.

The character has also battled Thanos multiple times, so her resume certainly seems to mark Mantis out as a prime candidate for joining the gang – at least judging by her comic book incarnation. Guardians of the Galaxy has been known to take liberties with its source material perhaps more than other MCU movies, however, and during her appearances in both available trailers for Vol. 2, Mantis appeared to have a somewhat naive nature. This could potentially prevent her from gelling with the street-wise and battle-weary current crop of Guardians… or it could be a recipe for hilarity. 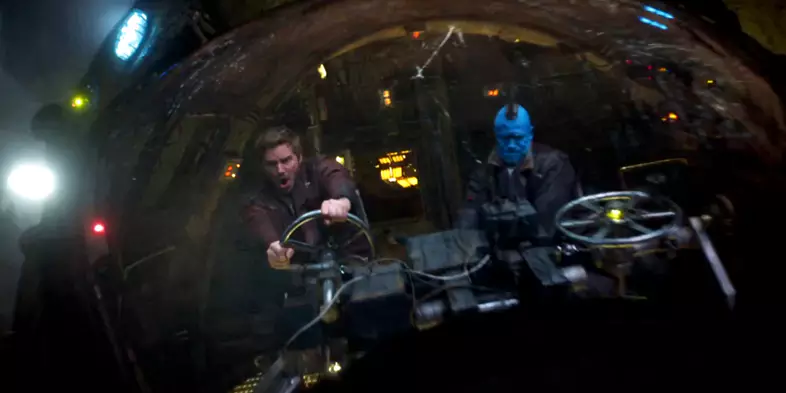 Like Mantis, this Smurf-colored criminal has been seen alongside the five Guardians on multiple occasions in the promotional material for Guardians of the Galaxy Vol. 2 and, despite their bickering, the end of the first movie seemed to show Yondu and Star Lord on decent terms – even if Quill did give Yondu a troll doll instead of an Infinity Stone. Yondu has been somewhat of a surrogate father to Peter since he left Earth (he magnanimously prevented the Ravagers from eating Peter after they kidnapped him), and with the new movie heavily involving the character’s real parentage, it’s perhaps natural that Yondu would become a more sympathetic figure this time around. The Super Bowl trailer shows Yondu co-piloting the Milano and features a line where Groot tells him “Welcome to the frickin’ Guardians of the Galaxy.” Only he didn’t use frickin’.

This all seems to point fairly conclusively towards Yondu being a fully-fledged Guardian in Guardians of the Galaxy Vol. 2, and it appears as though the catalyst for Yondu’s good-guy turn could be a mutiny within his own Ravager group. The addition of Chris Sullivan’s Taserface to the cast means a new potential leader for the criminal gang is waiting in the wings, and Yondu may find himself with nowhere to go – ultimately turning to Quill and the Guardians for aid. It’s debatable, however, whether Michael Rooker’s mohawked outlaw will still be a Guardian when the credits roll. His relationship with Star Lord has always been rocky and depending on how the arc with Ego pans out (and how Quill responds to his new family dynamic), Yondu might find himself unwilling to make the Milano his home. However, it’d also be unwise to bet against the character regaining control of the Ravagers before the movie’s end 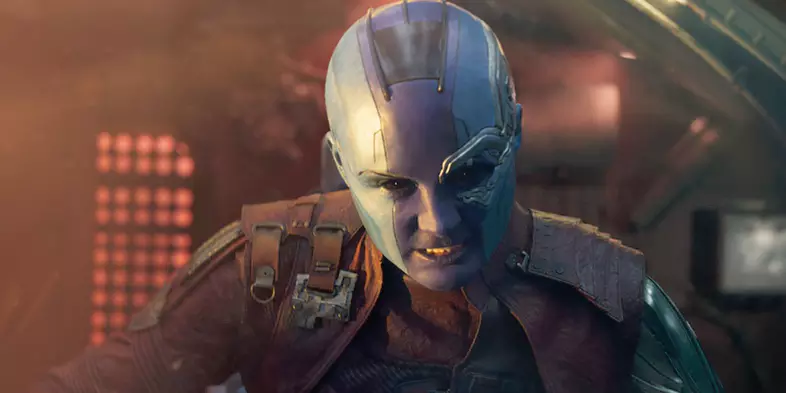 Karen Gillan’s Nebula was one of the most pleasant surprises in the original Guardians of the Galaxy – a badass fighter with an incorrigible mean streak and plenty of baggage. But without Thanos or Ronan to guide her, the villain will no doubt enter the sequel feeling lost and conflicted and this could lead to her seeking the support of her adoptive sister Gamora. Certainly, in the most recent trailer, Nebula appears to be working with the Guardians rather than against them – albeit to a lesser extant compared to Yondu and Mantis – and Gillan has claimed in interviews that Nebula will be showing a more sympathetic side this time around.

An unfinished story arc currently surrounds Nebula and Gamora and so there’s plenty of reason for her to want to join the Guardians on a temporary basis, however unlike Yondu, there’s perhaps more cause for her to stay permanently. The evident emotional scars from being enslaved by Thanos will seemingly be addressed in the sequel and Gamora is perhaps the only person in the Galaxy who can both relate to and stand up to her sister. James Gunn has however, claimed that Nebula can’t necessarily be completely trusted and in the Marvel comics, the character has more or less always been a villain. Since most of Nebula’s evil emanates from her relationship with Thanos – and given that Karen Gillan has confirmed her involvement in Avengers: Infinity War – a potential return to wrongdoing would make more sense if it was to take place in that movie, seduced by the power of Thanos, rather than before the end of Guardians of the Galaxy Vol. 2. 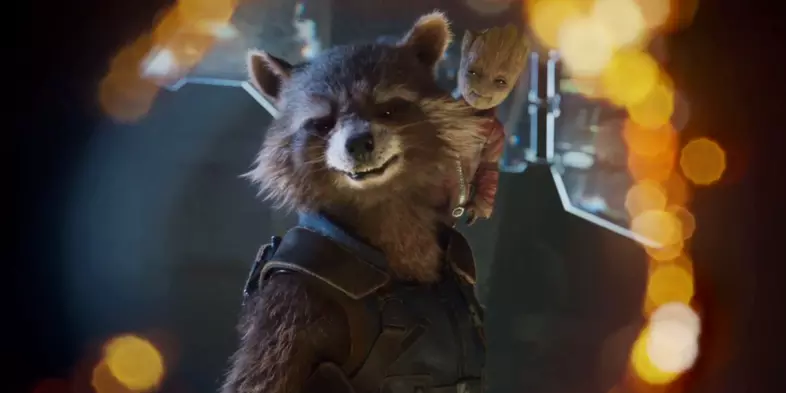 When discussing who should comprise the team of Guardians by the end of Guardians of the Galaxy Vol. 2, it’s important to not only consider who could be added, but who might be taken away. The first movie played on viewers’ emotions with the destruction of Groot, and although the tears were halted by the reveal the talking tree had been reborn, the sacrifice was still a defining moment in the film. As such, it wouldn’t be a huge surprise if a similar death – a likely temporary one – occurred towards the end of the sequel. It’s also feasible that the group will experience its own inner turmoil, and certain members could quit and go their separate ways.

As the group’s leader, Quill has a shiny suit of plot-armor protecting him and has been confirmed to appear in Infinity War to boot. Baby Groot can also be ruled out as not only is Gunn unlikely to pull the same trick twice, but if he killed off Baby Groot audiences would riot. This leaves Gamora, Drax and Rocket Raccoon and although all three are confirmed to appear alongside Star Lord in the next Avengers instalment, that doesn’t necessarily have to be as part of the Guardians.

Gamora and Quill’s budding romance makes her less likely to depart the Milano and the movie’s trailers have suggested Drax is more at home than ever with his new found family. That just leaves Rocket. The anthropomorphic creature will supposedly suffer a crisis of faith in Guardians of the Galaxy Vol. 2, questioning whether he truly belongs as part of the Guardians family. This could potentially be setting up an emotional send-off for the character, who may decide to leave the group and strike out on his own… or end up making a sacrifice of his own. 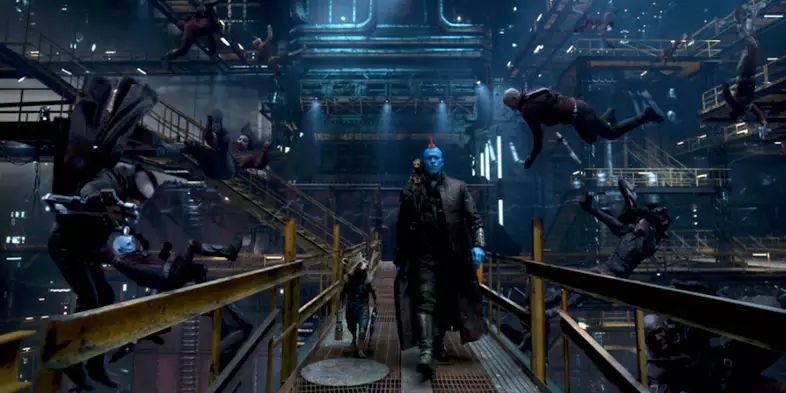 While Yondu, Mantis and Nebula will almost certainly become members of the Guardians at some point during Guardians of the Galaxy Vol. 2, it’s likely that this won’t be the team in place by the end of the movie. Who should be in the Milano by that point is, of course, a subjective topic depending on character preferences, but in terms of additions that would make the most sense, Mantis and Nebula seem the most suitable. Mantis already looks like an excellent foil for the humor of the other Guardians, and her abilities compliment those already in place. Nebula, meanwhile, simply has nowhere else to go, and it would make sense for Gillan’s character to see some serious progression before the end credits. Since it’s hard to imagine her settling down for a quiet life, a career with the Guardians makes a lot of sense.

Although Yondu is certainly the most paid-up new addition to the Guardians judging by the trailers, the thought of him working permanently under his previous employee Peter Quill doesn’t seem a probable scenario. Yondu may show more of his heroic side this time around, but he’s far too volatile and proud to become a full-time Guardian and unlike Nebula, he’s mentally grounded and self-aware and the chances of him simply handing control of the Ravagers over to the group’s rebels seem slim. Yondu’s alliance with the Guardians of the Galaxy is likely to be temporary and by the end of the movie, he should be returning to his previous life, perhaps having left a little something behind to get revenge for Quill’s Troll trick.

With all that considered, that leaves the final members of the Guardians by the end of Guardians of the Galaxy Vol. 2 as: Star Lord, Gamora, Drax, Baby Groot, Rocket (hopefully), Mantis and Nebula. Now there’s a group you wouldn’t want to get on the wrong side of.

Check out Sideshow’s wide range of Guardians of the Galaxy collectibles HERE!

This article originally appeared on Screenrant: How the Guardians of the Galaxy Team could change in Vol.2