Sideshow recently had an opportunity to speak with legendary comic book artist and concept designer Adi Granov and art director David Igo about conceptualizing and fully realizing a series of statues that celebrates Granov’s iconic work in Marvel Comics. 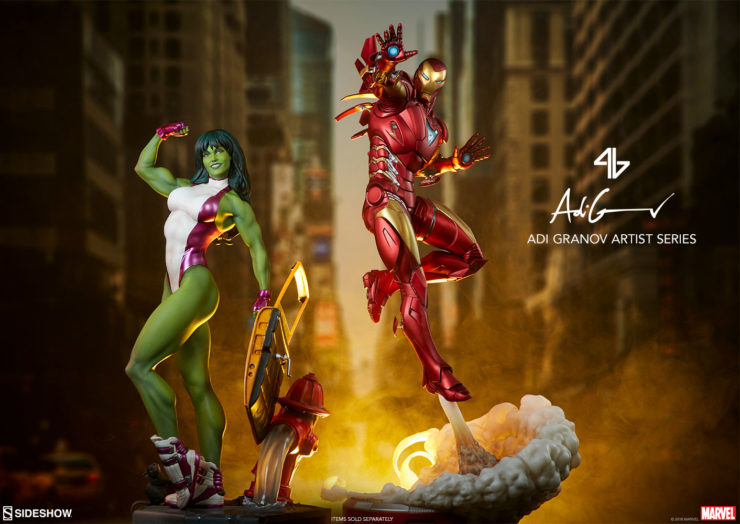 The Adi Granov Artist Series features a uniquely designed Iron Man suit, known as the Extremis Mark 2, as well as the beloved gamma-powered gal She-Hulk, sculpted and painted to capture the artist’s signature style. Both of these Marvel collectibles represent incredible milestones in Granov’s career working with Marvel Comics, from illustrating a popular series of She-Hulk comic covers to doing the interiors of the acclaimed Iron Man: Extremis miniseries that redefined Tony Stark as fans knew him.

Check out the full interview below to learn what inspired the poses for these statues, what it took to capture Granov’s 2D style as 3D collectibles, and more!

How were Iron Man and She Hulk chosen to be included in this artist series?

ADI: I did some She-Hulk covers way back in 2003 and those have remained quite a popular depiction of her. I really like the character, especially her combination of power and humor, so I was very happy to be able to do something with her again! 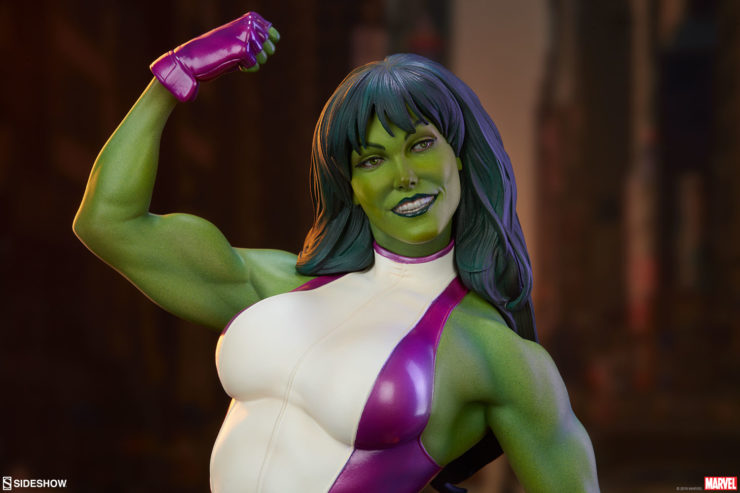 DAVID: When Adi and I talked over some ideas for possible statues, we always wanted to do a NEW Iron Man suit design. Riffing on the Extremis suit and doing an updated version of the design seemed like a great nod to Adi’s past work while bringing a new spin to it.

With that, going back to one of the first things Adi ever worked on for Marvel, She-Hulk seemed like a nice companion as a bookend for Adi’s work over the years.

We don’t often see Iron Man in flight in statues, so what inspired the dynamic choice of pose for him?

ADI: I think from a practical point of view, doing a statue in flight is tricky to pull off right, but in illustration, at least in my case, I have done a lot of art of him flying. I wanted to try to bring some of that dynamism to the statue. 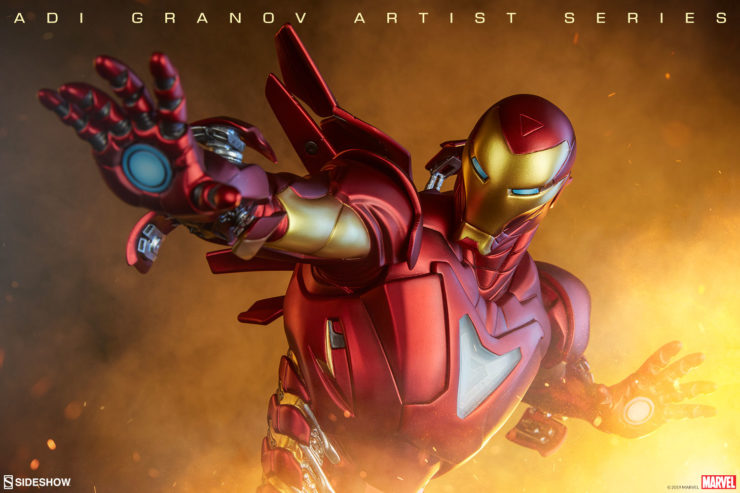 Since it’s a completely new suit design, somewhat more stylized than the movie designs, we could play with the smoke in a fun way to allow for the pose. I guess you could say the statue is a meeting of my work on comics with the stuff I did on the movies. 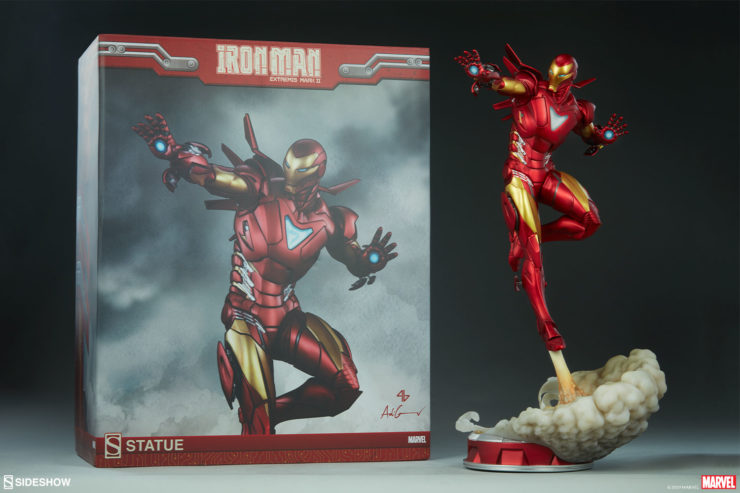 DAVID: What Adi said. It’s always hard to pull off mid-flight poses in statues without making them look forced or too anchored… but Steve Schumacher (the sculptor) really ran with Adi’s art and brought such great life not only to the suit of armor, but to the smoke plume as well. That’s very hard to do and he did such a great job with it!

For She-Hulk, how did you balance the character’s humor with her strength?

ADI: It’s actually those two elements that make the character possible in my eyes. I think if taken too seriously, a lawyer in NYC who turns into She-Hulk could be really difficult to make sense of, but the humor element is what gives her another dimension and makes it work. The trick is to capture all of that in a single, frozen moment. 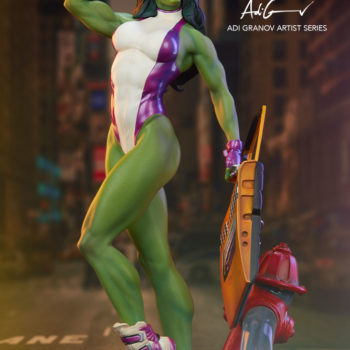 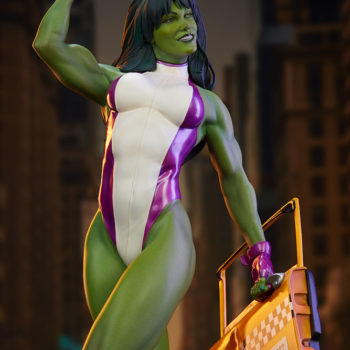 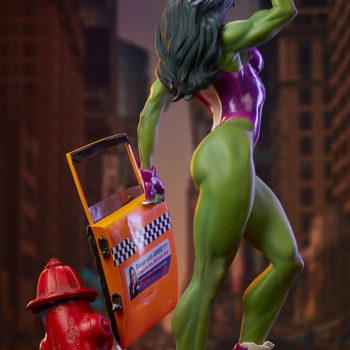 Were there any particular comic stories or moments that influenced these pieces?

ADI: For She-Hulk, it was definitely the Dan Slott depiction of the character from the time I did the covers. I was really in love with the book and the way he and Juan Bobillo made it all work. 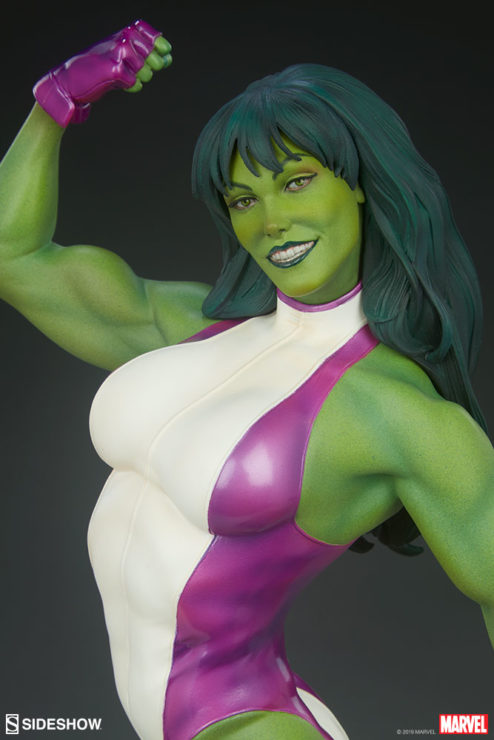 David, what was the process of bringing these designs to life in 3D?

DAVID: Working closely with Adi and Steve (the sculptor) was really key. Translating 2D art to 3D always has its own obstacles from project to project, and these two designs were quite different.

With Iron Man, it was a lot more straightforward pose-wise and Steve just took Adi’s art and ran with it, but getting all the little openings and panels in the armor just right took a bit more time. Steve worked pretty closely with Adi and JP Mavinga (an in-house designer) and Aaron McNaught (another in-house sculptor) to really push all those elements to have that extra level of detail and visual pop. 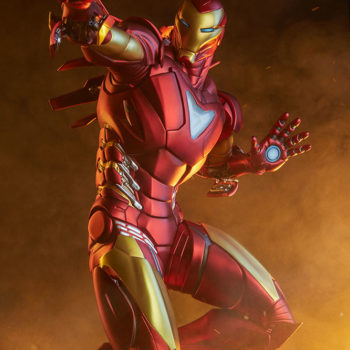 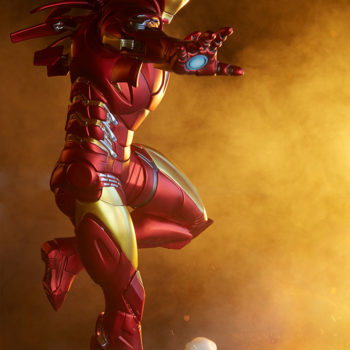 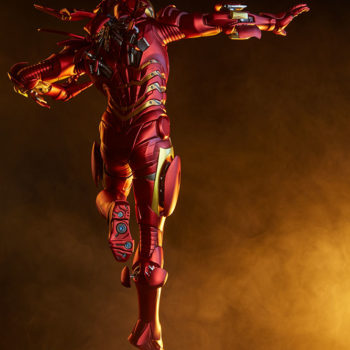 She-Hulk took a lot more finessing to get the subtle pose and attitude just right. We actually made a door prop and did some pose studies to try to see how the subtleties of the pose could really work in 3D, and we took that and even pushed it a bit more once in 3D sculpt. The finishing on her was a bit more straightforward, so in a way, these two projects were total opposites of each other. Haha! 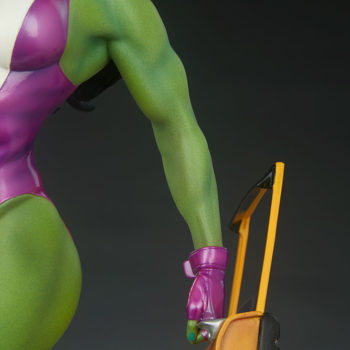 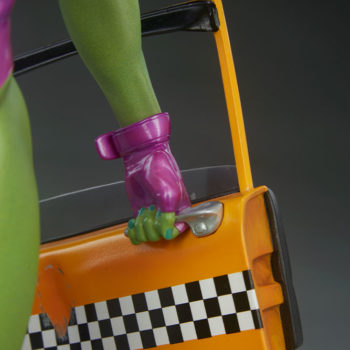 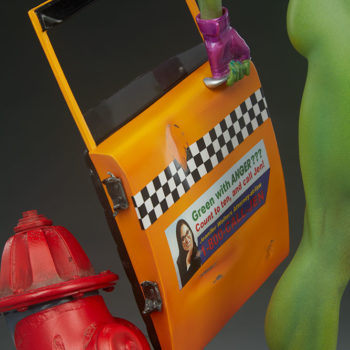 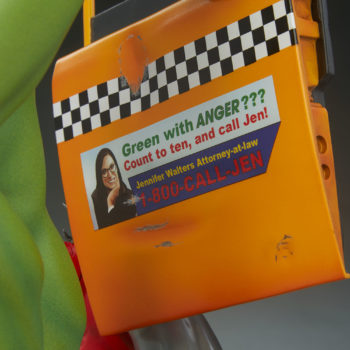 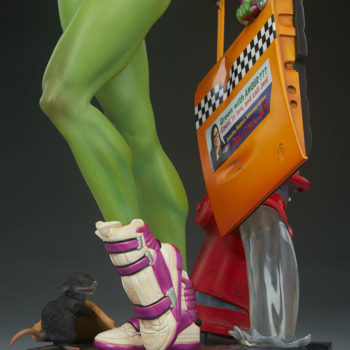 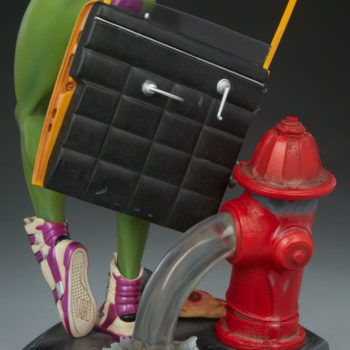 Adi, how much input did you have in the sculpting process?

ADI: Quite a bit. I am very concerned with anatomy and posing and the way they are stylized while retaining logic. I tried to make my ideas and intentions behind them clear and explain my thinking for making certain choices.

Since these are meant to be representations of my painting style, I was also interested in trying to make the colors and paint finishes match my illustrations.

Do you have any particular favorite details on each statue?

ADI: That’s tough! With Iron Man in particular, as every single part of him had to be designed, it’s hard to choose one element. I am really happy to be able to update Extremis and apply to it a lot of the stuff I’ve learned from working on the movies. Overall, the meeting of my comic work and movie work in one suit is definitely my favorite part! 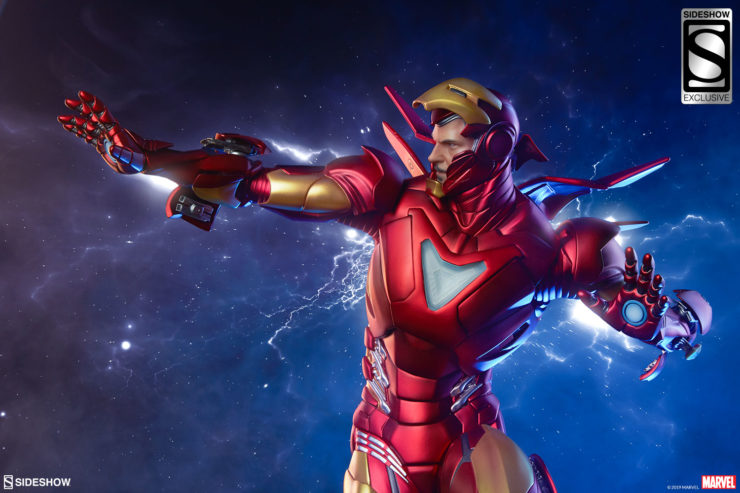 As for She-Hulk, I love the playfulness the statue has without it being too silly. I think we pulled of a great balance. In my work I always try to depict the power in heroes and not necessarily go down obvious paths, especially when female heroes are concerned, so I’m very happy the statue is a great representation of that. 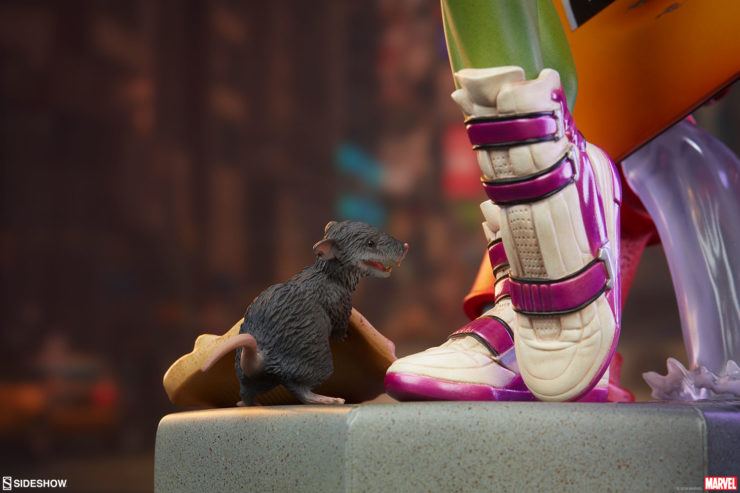 DAVID: I totally agree with Adi. I loved seeing him update the Extremis armor after all this leveling up he’s been doing over the years. With She-Hulk, I loved the balance of playful and fun, strong, and feminine.

Both are really, to me, perfect statues. I’m proud to have been a small part in seeing them come to life!

Big thanks to Adi Granov and David Igo for sharing their insights into this incredible Artist Series collection here! Comic book history is captured in these dynamic and uniquely designed statues.

The Iron Man Extremis Mark 2 is now sold out, but the Adi Granov Artist Series She-Hulk Statue is currently in-stock on our site. Don’t miss your chance to give your collection a Granov-inspired gamma power-up with the jade giantess herself! For full unboxing and assembly instructions, check out the She-Hulk Out of the Box video below.


For all of your favorite Avengers and villains, be sure to check out Sideshow’s full universe of Marvel collectibles.