In the haunted, harrowing dark fantasy world of Jujutsu Kaisen, human emotions such as pain, shame, and greed manifest into physical beings known as curses. The curses, in turn, wreak havoc upon unsuspecting humans. And the curses can only be stopped by another curse. These mystical arts that revolve around curses and cursed objects are collectively referred to as jujutsu.

Thus, jujutsu sorcerers are trained in order to combat this threat. They attend training schools where they hone their skills, learn various combat techniques, and work alongside other sorcerers to rid the world of evil. In the Jujutsu Kaisen anime, our protagonist is admitted to the Tokyo Jujutsu High School of Sorcery. Below, let’s meet our main hero Yuji Itadori as well as his curious classmates. 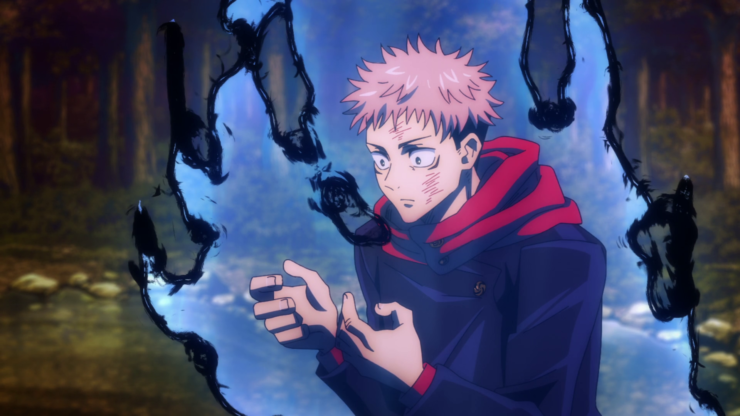 Jujutsu Kaisen‘s main character is Yuji Itadori. This rather normal high school student is energetic and amicable, and cares deeply about the lives of those around him, especially after his grandfather’s death. Therefore, when his ghost-obsessed club friends are endangered by a curse, Yuji charges in without any knowledge about the fantastical world into which he is about to enter.

In a daring move to protect a stranger, Yuji swallows a cursed object — the overwhelmingly powerful severed finger of the King of Curses, Sukuna Ryomen. Sukuna is subsequently trapped inside Yuji. This makes him Sukuna’s vessel, and a massive liability for all sorcerers, as Sukuna could take control at any moment.

Although the initial plan is to kill Yuji, professor Satoru Gojo decides to train him as a sorcerer instead. Yuji is then enrolled into Tokyo Jujutsu High as a first-year student with a lot of catching up to do. However, he is a quick and proficient learner, with an innate talent for channeling cursed energy. His passion, determination, and strong morals additionally contribute to his proficiency at school.

Yuji’s powers include enhanced strength, speed, and reflexes. His durability surpasses that of a normal sorcerer’s because he can draw on Sukuna’s healing abilities — which also make him resistant to poison. Even without Sukuna’s curse, though, Yuji can withstand pain and physical damage out of sheer force of will. Finally, Yuji is one of the strongest martial artists in the series. 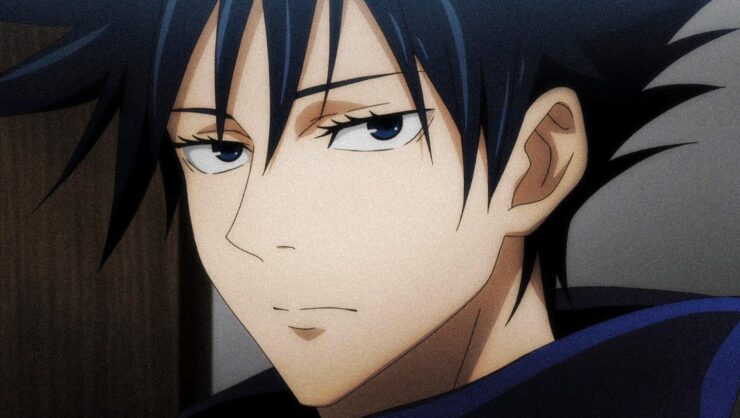 When Sukuna emerges, first-year student Megumi Fushiguro is first on the scene. It is this character — the anime’s deuteragonist — who Yuji protects by impulsively swallowing Sukuna’s finger. After that, Megumi feels slightly indebted to Yuji. However, Megumi also feels genuine friendship toward Yuji and argues against his execution. This is because Megumi has unbreakable beliefs about what is right and wrong, and who deserves to die or doesn’t. Essentially, he has no issue killing criminals or murderers, but is upset when good people are hurt. We can juxtapose this to Yuji’s absolute disgust at the thought of killing anyone.

Megumi is silent and secretive. Even his closest friends don’t know much about him. This is partially due to his family heritage, as he comes from a powerful yet antagonistic clan, the Zenin. However, that doesn’t make him any less affectionate toward his friends — he just keeps his feelings about them on the inside. His devotion is displayed whenever he protects them from curses.

A fantastic fighter, Megumi battles hand-to-hand as well as with cursed tools and weapons and, notably, wooden tonfa that he imbues with his own cursed energy. Megumi’s most unique skillset is his shikigami. A technique inherited from the Zenin clan, his Ten Shadows move allows Megumi to use shadows to do battle, store objects, and hide inside. 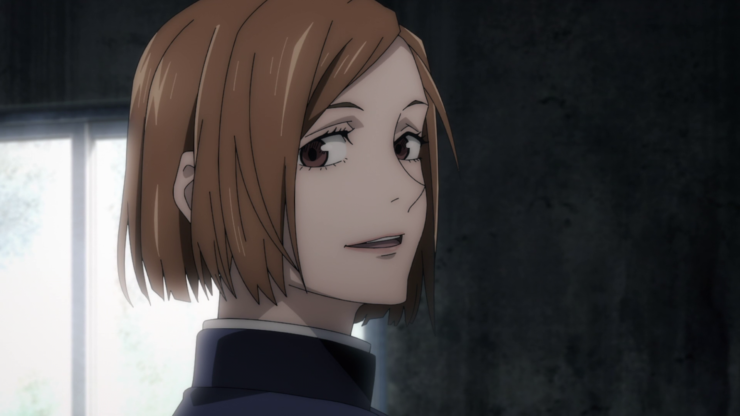 Confident and outspoken, Nobara Kugisaki is the last of the three first-year students attending Jujutsu Tokyo High. She likes dressing up as well as battling curses, and takes pride in the fact that she can be both a powerful sorcerer as well as a pretty woman. Because she is so headstrong and secure, she can also be quite argumentative. She also loves competing and trash-talking her opponents, whether they are human or curse.

Nobara moves from a small town to a big city to become a sorcerer. She wants to prove herself as more than a countryside village girl, though she is also actively dismantling her beliefs that someone’s background defines them. We see this most evidently through her intolerance for an enemy’s sob story. Rational and level-headed, but also a bit of a class clown and seriously intense, Nobara takes immense pleasure in outwitting anybody. At one point, she ensures her victory against a curse by inflicting self-harm and smiles while she does it.

Lastly, Nobara’s abilities revolve around her signature metal hammer. This tool is decorated with a heart. She utilizes it in every combat situation, enhancing it with cursed techniques including Straw Doll and Hairpin. In combination with a variety of sharp nails, the hammer is a deadly weapon. When fighting humans, then, Nobara swaps her hammer out for an oversized red rubber mallet. 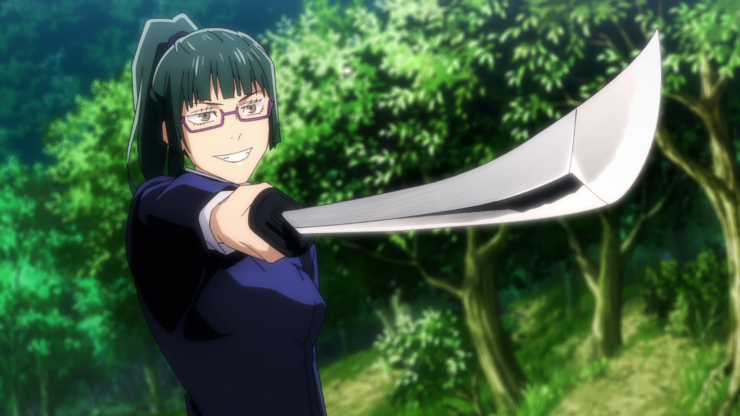 Maki Zenin leaves her family because of their rejection and abuse. Maki lacks cursed energy, but still studies to become a strong sorcerer despite her clan’s disapproval. Straightforward and blunt, she is highly motivated and even leaves her twin sister behind to fulfill her own dreams of making it as a sorcerer. This third-year student leads her classmates during training and battles. While she is impatient and easily angered by their mistakes, she ultimately pushes them to help them, and loves them all. She is respected by peers and professors alike. 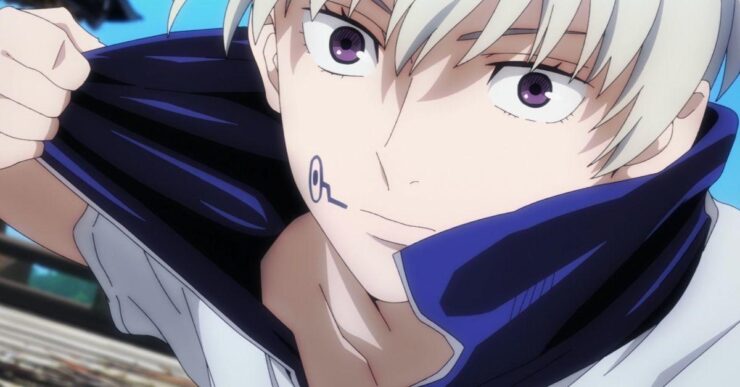 Toge Inumaki is a descendent of the Inumaki family and has thus inherited their rare cursed speech technique. Born with the “Snake and Fangs” seal on his tongue and both cheeks, the quiet second-year student is calm and insightful yet struggles to communicate with his friends. Because Toge’s enchanted speech is so powerful and deadly, he can only talk in bento box ingredients. 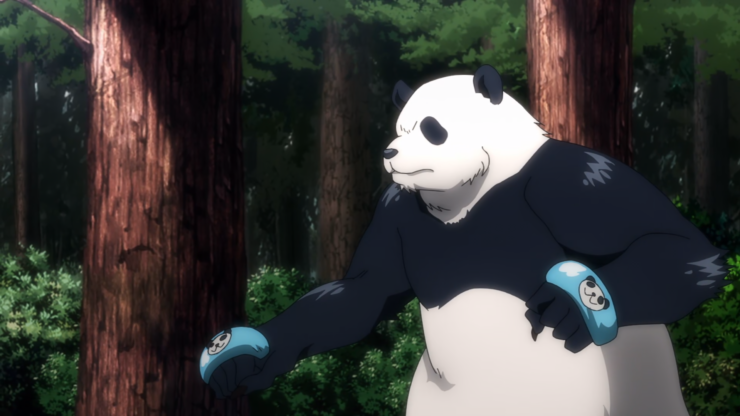 Despite appearances and name, the second-year student Panda is not actually a panda bear. He is an Abrupt Mutated Cursed Corpse created by Jujutsu Tokyo High School’s principal Masamichi Yaga. Panda is upbeat and humorous, and is very difficult to anger. He has a great deal of empathy. He is also the most advanced Cursed Corpse of his kind, and can exorcise curses solely through his physical abilities. If pushed far enough, Panda can additionally switch his physical body by having a different core take over. He has a gorilla mode as well as a mystery core that is yet to be revealed in the anime. 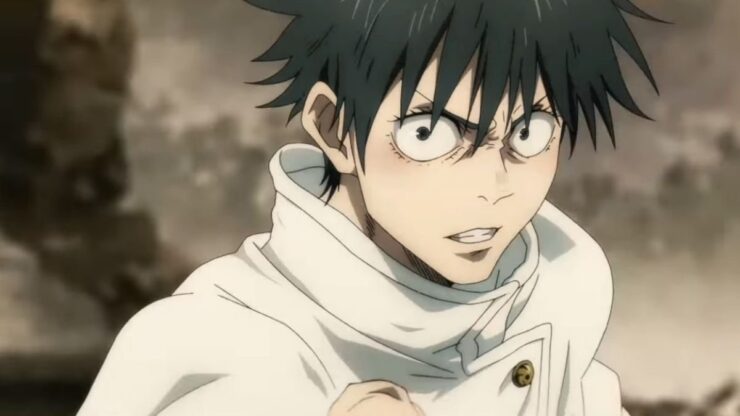 The lonely Yuta Okkotsu is rarely seen with the other second years. Yuta is generally too shy or scared to speak to people. He is anxious and insecure, with his timid nature stemming from the bullying he received as a boy. Initially a special grade cursed human haunted by his late childhood best friend Rika Orimoto, Yuta now trains overseas but still retains student status in Tokyo.

We actually have yet to see Yuta in the Jujutsu Kaisen anime. Instead, the upcoming Jujutsu Kaisen 0: The Movie will explore Yuta’s backstory and relationships with the current characters.

Who is your favorite student attending Jujutsu Tokyo High? Let us know in the comments, and don’t forget to Let Your Geek Sideshow!