Many comic book collectors keep their covers pristine and collect special issues simply for their visual appeal. Well, you can translate that love for Marvel Comics with Sideshow’s Marvel art prints. Specifically, our Spider-Man art. Amazing, attractive, and admirable, our fine art features the web-slinging super heroes and sinister super-villains that you love.

Whether you’re just beginning your Marvel collection or spinning up a new corner of your art web, we have plenty of fine art print recommendations to get you going. Check them out below.

Heroes of the Spider-Verse 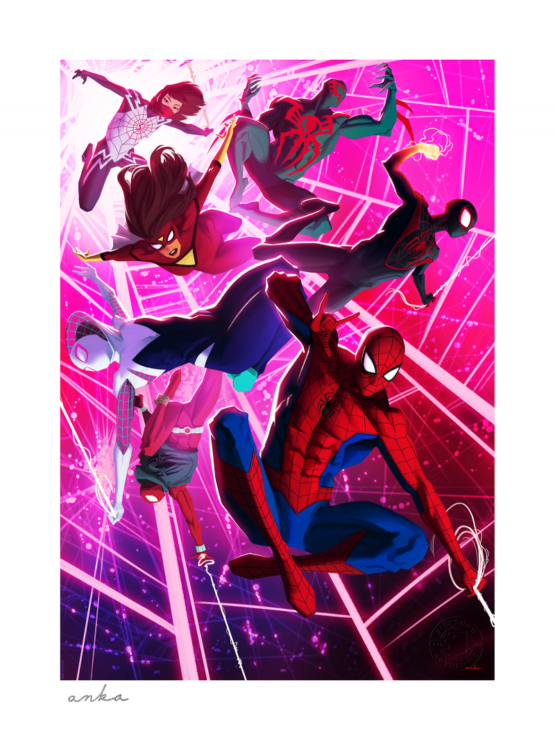 Can’t get enough of every version of Spider-Man? Invite yourself into the Spider-Verse with the Heroes of the Spider-Verse Fine Art Print by Kris Anka. Featuring Peter Parker/Spider-Man, Cindy Moon/Silk, Jessica Drew/Spider-Woman, Gwen Stacy/Spider-Gwen, Miles Morales/Ultimate Spider-Man, Ben Reilly/Scarlet Spider, and Miguel O’Hara/Spider-Man 2099, this colorful composition is for everyone who picks Spider-Man as their favorite character but can’t always decide which Spidey is the best. Because now they don’t have to choose! 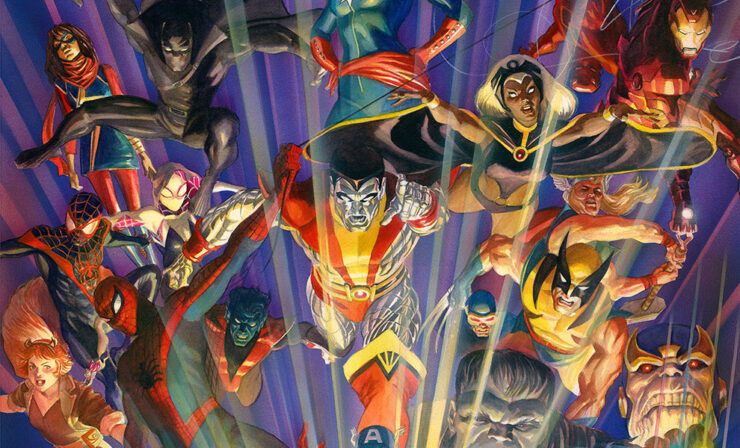 Peter Parker is part of a much bigger world. That world is full of X-Men, Avengers, and many other heroes he’s happy to call his family— including another Spider-Man, Miles Morales. Alex Ross’ Marvel Comics #1000 Lithograph celebrates eight decades of the mightiest comics. Fan-favorite Spider-Man is there with friends and foes alike, making this Marvel wall art a must-have for fans of the webslinger’s role throughout the years. 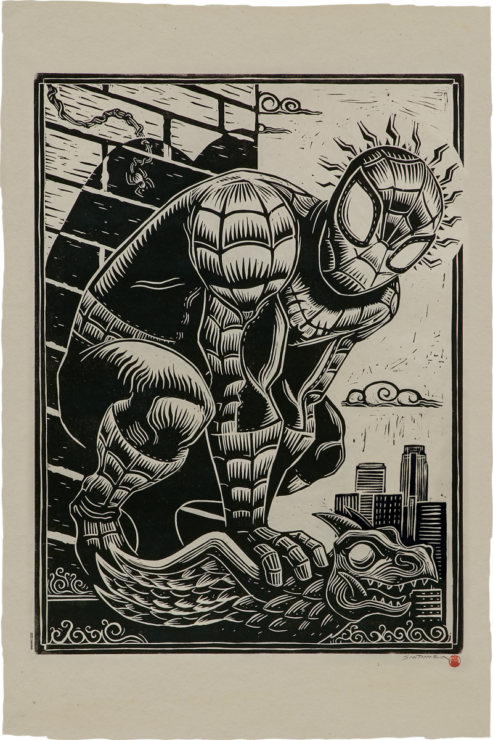 Peter Santa-Maria’s signature woodblock style transforms Peter Parker’s city into an ink block balancing act of light and shadow in the Spider-Man Linocut on Lokta Paper. This Marvel art utilizes a reserved color palette but is no less bold than its flashy comic art counterparts. Get it for the art connoisseur in your life who loves super heroes yet maintains a more minimalist aesthetic in their household.

It’s Spider-Man versus Green Goblin, Doc Ock, and Lizard in the Spidey Versus… Variant by Mark Daniels. Fashioned like a Marvel poster, this lithograph is a comic cover and action figure encasing all in one. At least, those are the vibes — er, Spidey senses — we’re getting from it. 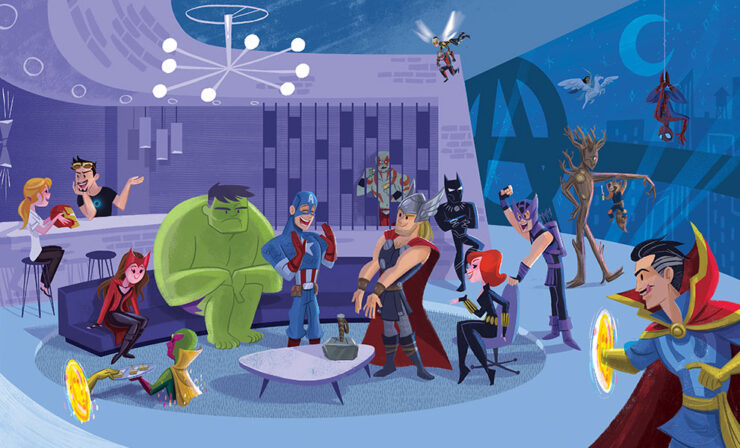 Nothing like an Avengers bash after a hard day of bashing bad guys! The Party at Avengers Tower Fine Art Print by Kat Hudson brings a bunch of hard workers together to relax and have fun. Spider-Man hangs out in the background, waving at his newfound pals Groot and Rocket. Put this Marvel print in a kid’s room, or hang it above the bookshelf for a moment of fluff whenever the comic storylines are getting angsty. 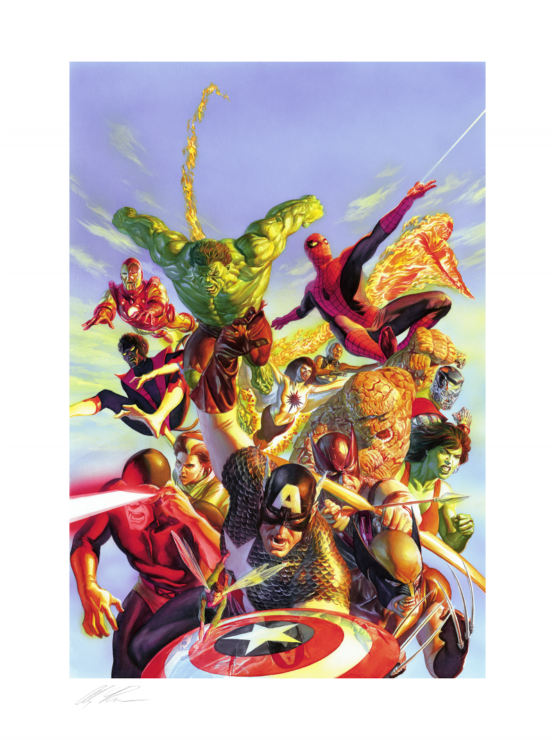 Spider-Man swings into action alongside his fellow heroes in the Secret Wars #1 Fine Art Lithograph by Alex Ross. Bold lines, bright colors, and Ross’ photorealistic style contribute to the epic atmosphere of this piece as the gathered Marvel characters burst toward their next battle. Gift this print to fans of the Secret Wars storyline or the avid reader who just really loves team-up events. 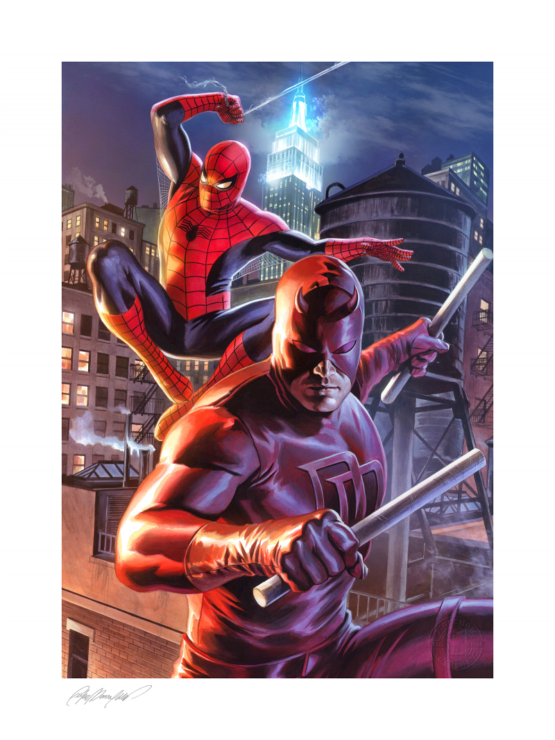 Have an NYC lover in your life? What about a person whose favorite color is red? The Daredevil & Spider-Man Fine Art Print by Felipe Massafera combines those passions in one heroic form! Whether you hang it in Hell’s Kitchen or Queens, this Marvel print is sure to be a statement piece in your collection.

Which of these Spider-Man artworks would you most like to add to your Marvel collection? Let us know in the comments, and don’t forget to Let Your Geek Sideshow!