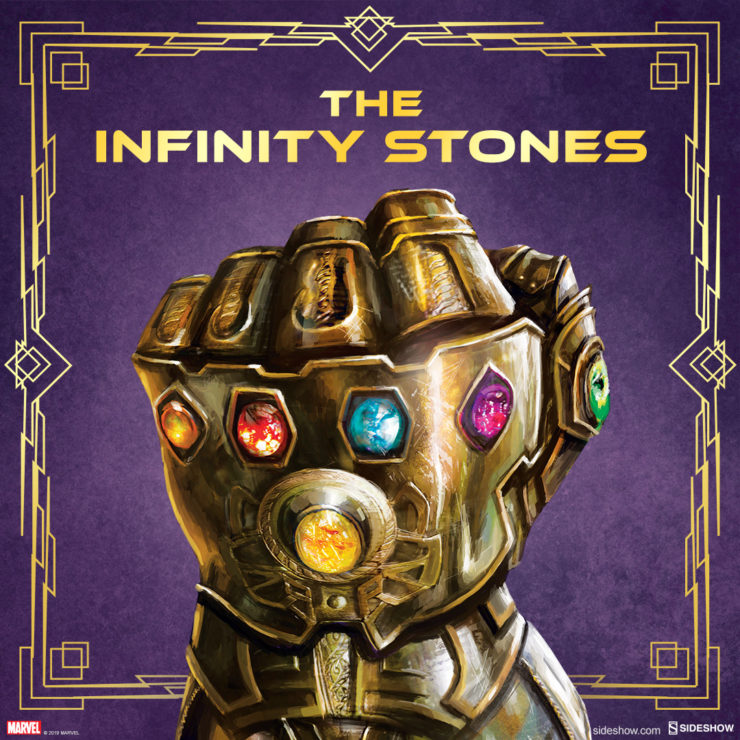 You’ve seen Thanos and the devastating snap of the Infinity Gauntlet, and you’ve seen what all the Infinity Stones can do together. But what is their history? And what are their powers? 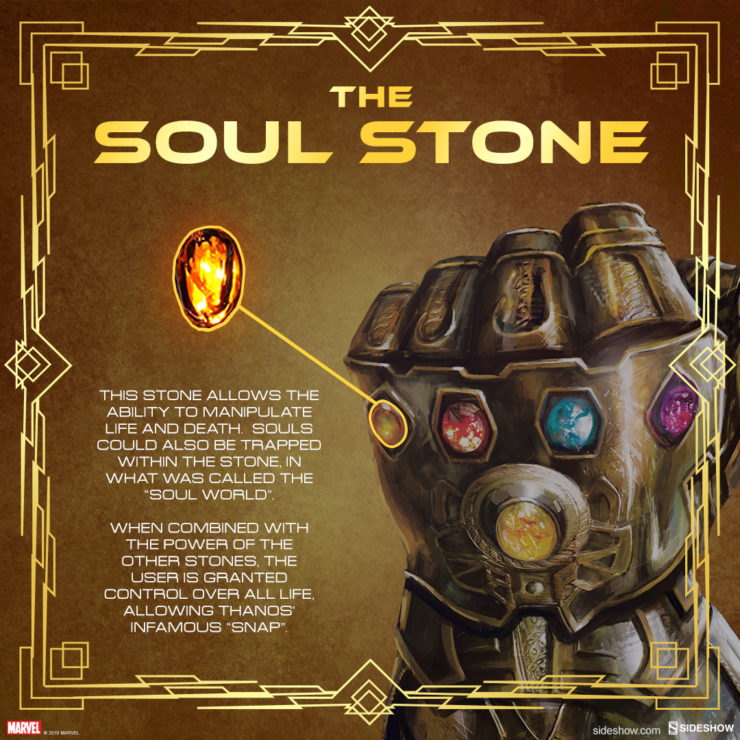 The Soul Stone is a powerful stone tied to the souls of every person in the Marvel Cinematic Universe. To receive it, you must travel to the distant planet of Vormir. There, you’ll find Red Skull, the protector of the Stones. He was brought there by his own quest to control an Infinity Stone. Ironically, the stones “cast him out”, teasing him with a treasure he could never possess.

Red Skull‘s explanation makes it seem that these Infinity Stones have some sort of sentience and will, and they really do. When Thanos came to get the Soul Stone, Red Skull told him the steep price for the stone. “A Soul for a Soul.” And so, Thanos had to sacrifice the one person he loved: Gamora. Only then could he add the Soul Stone to the Infinity Gauntlet.

In the comics, this stone creates a ‘Soul World’ wherein souls are trapped and transported wherever the stone travels.  Its full range of abilities is complex, yet greatly under-explored in the Marvel films. 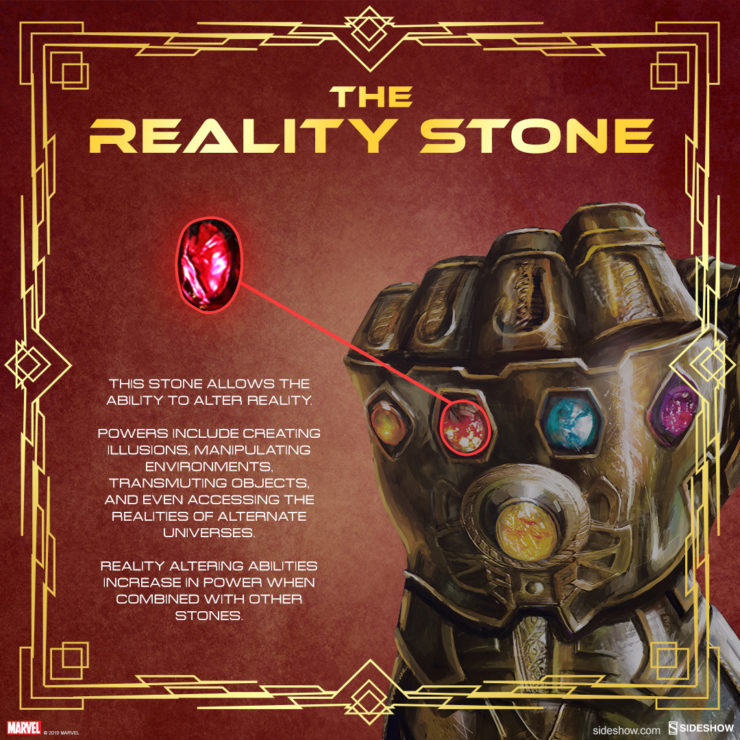 The Reality Stone allows its users to create illusions and even change the fabric of reality. It was first used by the Malekith, leader of the Dark Elves, in an attempt to bring an eternal darkness to all of the Nine Realms, but his planned was foiled by Odin’s father Bor.  After it was rediscovered by Jane Foster, the Asgardians entrusted the amorphous Reality Stone to The Collector.

The Collector’s Museum in Knowhere is ultimately where Thanos found the stone. This is where he easily fought the Guardians of the Galaxy and captured Gamora. The Reality Stone allowed Thanos the ability to create a grand illusion of a quiet museum to lure the heroes into a trap, despite the fact that he had already destroyed the place. 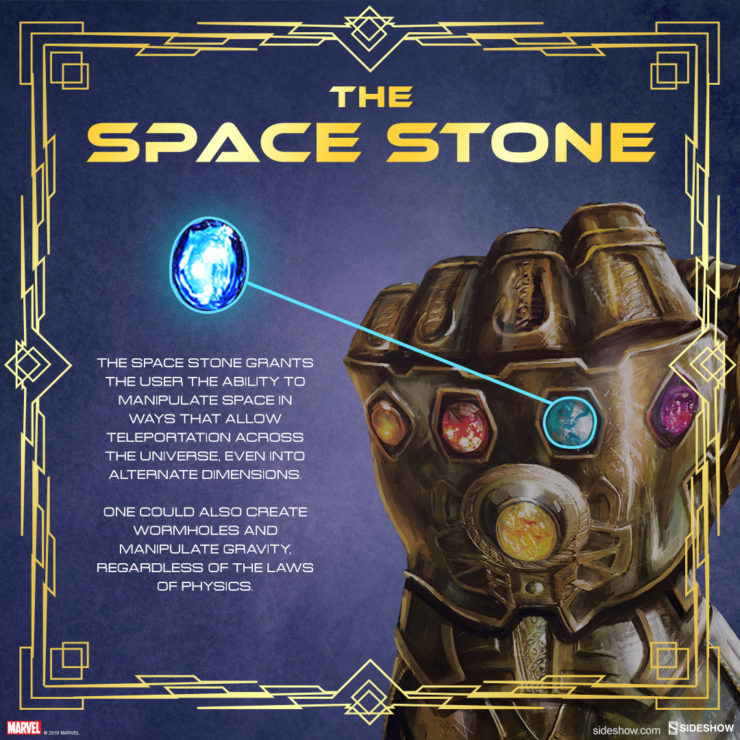 The Space Stone was hidden inside an artifact called the Tesseract for many years. It is likely the most heavily-used Infinity Stone in the Marvel Cinematic Universe. It was first used by Red Skull during World War II, after being hidden in Norway by the ancient Asgardians. However, the Space Stone activated and banished Red Skull to the planet of Vormir when he tried to grasp its power.

Later, the Tesseract was located by Howard Stark and used by S.H.I.E.L.D. and later by Dr. Wendy Lawson as a part of Project P.E.G.A.S.U.S. Its energies enhanced Carol Danvers and made her Captain Marvel. The Tesseract was eventually used by Loki, under the guidance of Thanos, to open a portal for the Chitauri invasion of Earth. Finally, Thor took the Tesseract back home to Asgard, where it was safe until Loki stole it during Ragnarok and inadvertently delivered it to Thanos in Avengers: Infinity War. 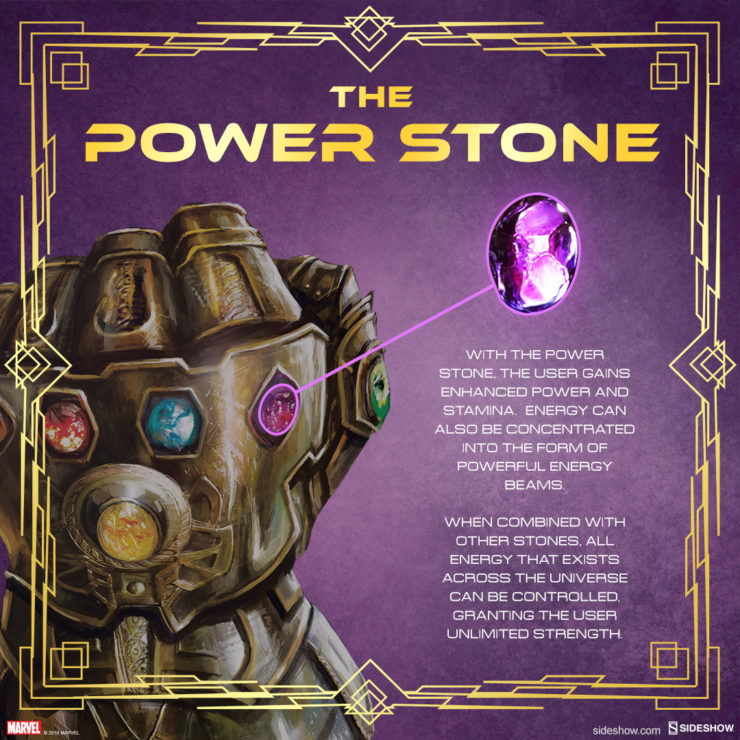 The Power Stone grants Thanos, who is already a strong opponent, nearly limitless power. It is so powerful that even touching it can kill organic life. It is said that if Ronan the Accuser even touched the stone to a planet’s surface, all of the plants and animals would die.

It nearly destroys the Guardians of the Galaxy when they risk their own safety to keep the Power Stone away from Ronan. At first, Star-Lord stored it safely on the planet Xandar. But it wasn’t safe for long. In Infinity War, Thor tells us, “Thanos already has the Power Stone because he stole it last week, when he decimated Xandar.” 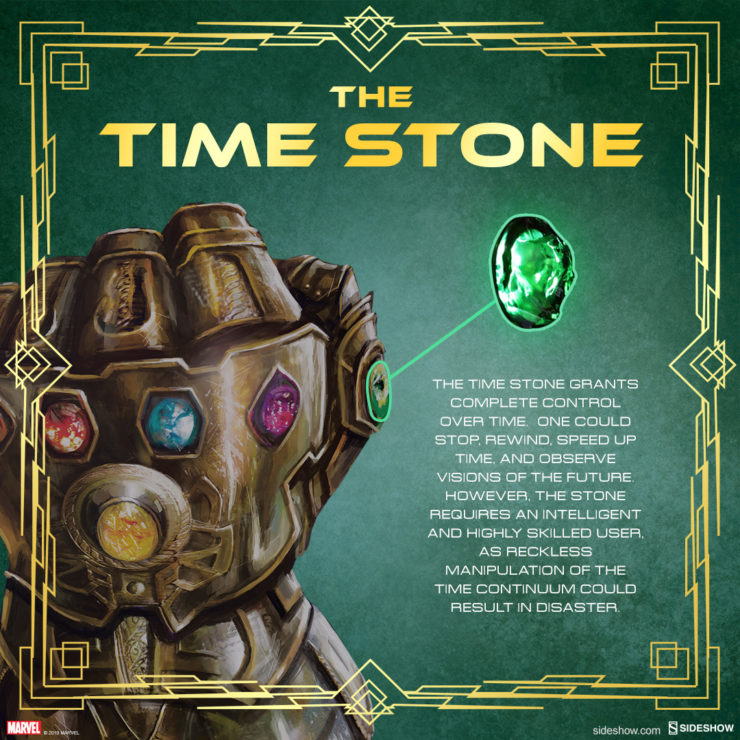 The Time Stone was captured by the powerful sorcerer Agamotto and stored inside the clever device called the Eye of Agamotto. It allows the wielder full control over time, though it is incredibly complicated to master. Only Doctor Strange seems to have a firm grasp on exactly how to use it.

We see this most prominently used when Doctor Strange faces off against the Dark Dimension’s ruler, Dormammu. He creates a time loop, trapping Dormammu so that he can never harm Earth. Later, Doctor Strange uses the stone to see over 14 million futures, before deciding to give the Time Stone to Thanos in a bid to ultimately stop the Mad Titan and undo the snap.

Thanos’ power grew the moment he put it in the Infinity Gauntlet, such that he was able to completely turn back time to reverse Scarlet Witch’s destruction of the Mind Stone in Wakanda. The Time Stone’s powers are mysterious and alluring to all who encounter it. 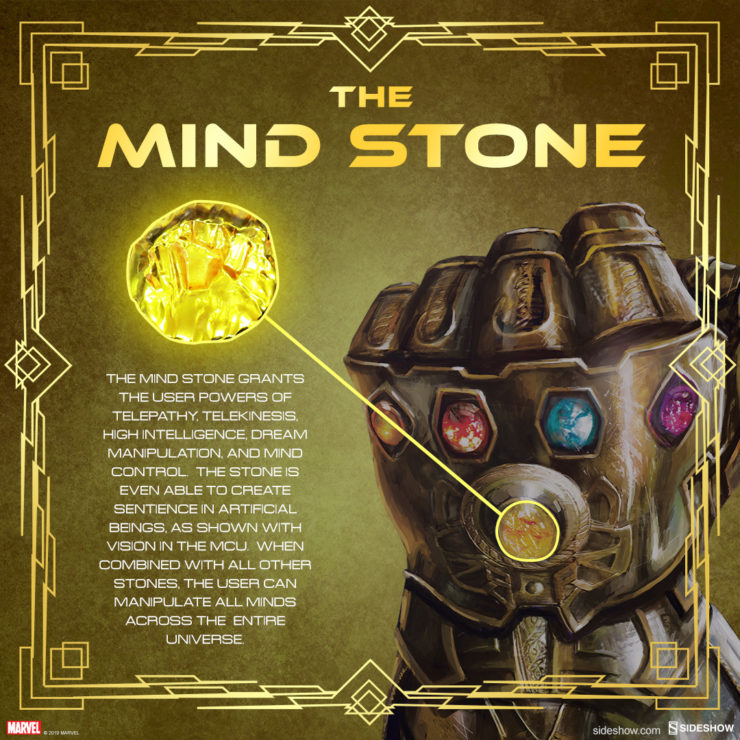 The Mind Stone has a unique a role in the MCU, actually quite similar to the Space Stone. At first, it was used in Loki’s scepter during the events of the first Avengers film. Even then, we got hints that it was truly the Mind Stone. Loki used it to brainwash the masses, and even capture S.H.I.E.L.D. agents under his thrall. When Baron Strucker used it in experimentation, it granted Pietro and Wanda Maximoff their powers, turning them into Quicksilver and Scarlet Witch.

Eventually, it combined with J.A.R.V.I.S. to create Vision. Vision was extraordinarily powerful, intelligent, and balanced, which tells us a lot about the nature of the Mind Stone. Once Thanos took it from Vision, there was nothing stopping him from using the Infinity Gauntlet for the snap.

Which Infinity Stone would you choose to wield?  Let us know in the comments, and don’t forget to Let your Geek Sideshow!

The Joke's on You: The Best Tricks of the Clown Prince of Crime!

The Turtles Take on Gotham in New Batman vs. TMNT Clip, Legion's Final Season Gets FX Premiere Date, and More!