In a multiverse of superpowers, mutants, aliens, gods, monsters, artificial intelligence, and more, it only makes sense that magic would be real. And yet there are still some people in Marvel Comics who do not believe in magic!

But magic is very real. Even Thor’s mother is a powerful witch! Many have studied magic and can wield it in different ways. So on this All Hallow’s Eve, let’s look at Marvel’s most masterful witches (pointy hats not included). 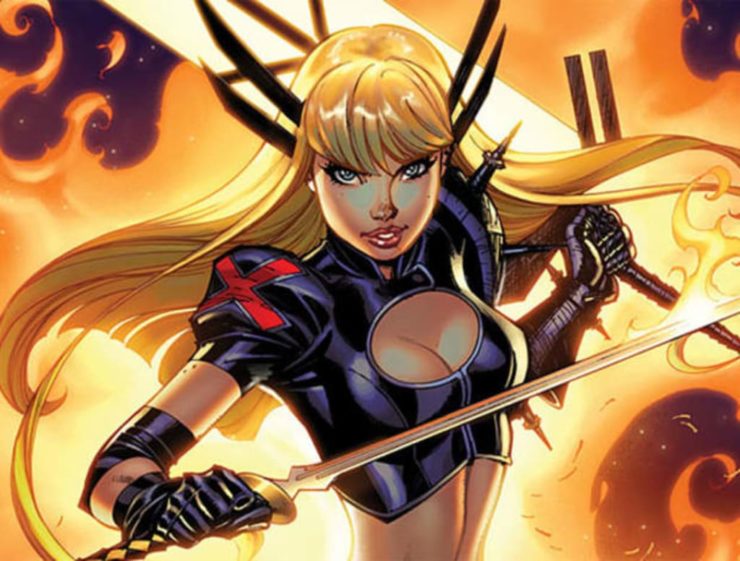 Illyana Nikolievna Rasputina is many things- she is a mutant, the younger sister of Colossus, and incredibly powerful sorceress. She has the mutant ability to teleport through time and space through the use of “stepping discs” that transport her into a realm called Limbo. There, in the alternate dimension of Limbo, Illyana, or Magik, is the Sorceress Supreme, and the true ruler of Limbo itself.

Her powers are truly limitless there, and even a thought can change the entire dimension on a subatomic scale. When she’s not in Limbo, her magical powers are significantly reduced, though she has mastered the ability to produce a Soulsword: a sword of pure magical energy that summons armor and can slice through any magical entity, and even Kitty Pryde when she is phasing. While she struggles with magic, Illyana is always learning more from Doctor Strange. 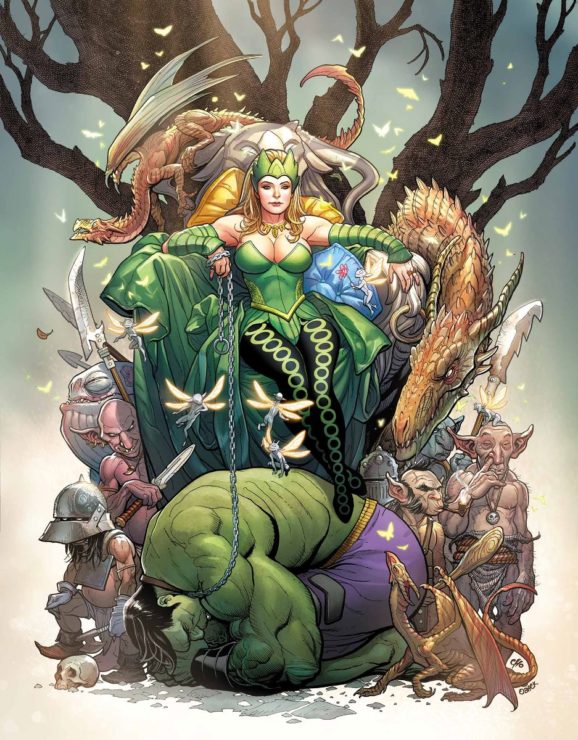 Enchantress was born as Amora in the realm of Asgard, elder sister to the lesser mystic Lorelei. Amora is one of the most powerful witches in all of Asgard and one of Thor‘s most formidable foes. She was overly ambitious while first learning magic, and was exiled for it. This didn’t stop her quest to learn more magic through any means necessary.

Enchantress uses her innate ability to manipulate Asgardian energies mixed with spells and enchantments to enhance her beauty and enslave those who fall for her. Once she enchants someone, she does all she can to learn their magic, their powers, and increase her strength through their knowledge. And of course, she can shapeshift, cast illusions, use telepathy, teleport, and more. 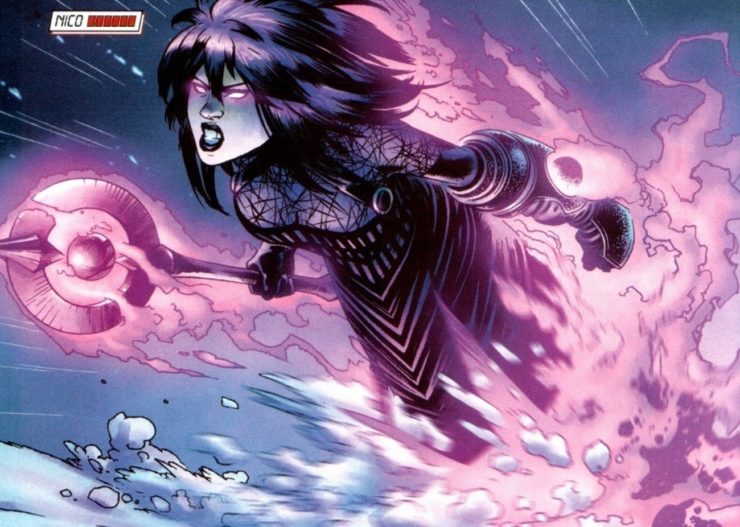 Runaway Nico Minoru took the name Sister Grimm in an attempt to hide her secret identity from the world, since her parents were both dark magic users. Nico has the ability to use the Staff of One, an incredibly powerful magical relic with a very specific set of rules. The Staff appears to be able to do absolutely anything, but due to Nico’s rudimentary understanding of magic, she must verbally communicate what she wants to Staff to do.

However, she can only use each word once for her spell to succeed. For example, she once said, “Freeze.” and the Staff froze the person in front of her. But when she said, “Freeze.” again, the Staff summoned a random group of pelicans. Otherwise, she can do genuinely anything if she can articulate her desires just right. 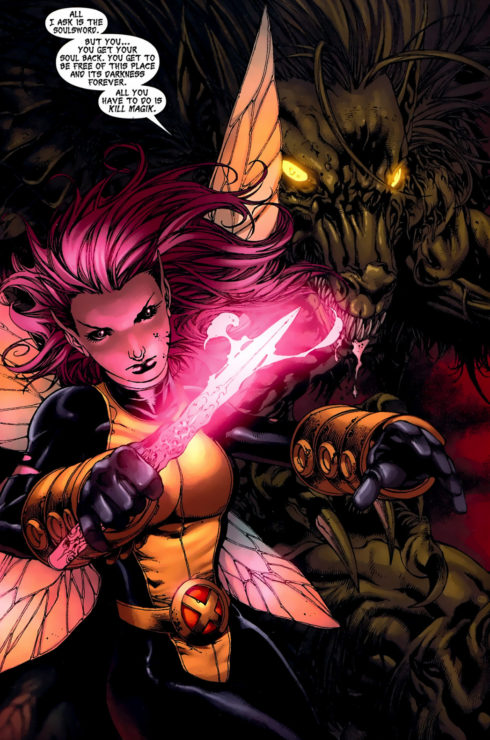 Megan Gwynn is a mutant known as Pixie. She has insect like wings that allow her to fly and produce a pixie dust that causes hallucinations in others. However, while she was a student at Xavier’s School for the gifted, she was kidnapped and held captive in Limbo. Magik went to go save her and the other kidnapped students. In order to defeat the kidnapper, Magik pulled out a portion of Pixie’s pure soul to create a new Souldagger.

The Souldagger left a part of Pixie’s soul empty, which was filled by powerful black magic. This black magic makes Pixie able to wield an incredibly amount of magic, and both Doctor Strange and Amanda Sefton (another witch) want to teach her everything they know because of how truly capable she is. With the black magic in her soul, Pixie doesn’t need to speak to cast spells and can teleport over large distances, even through dimensions. 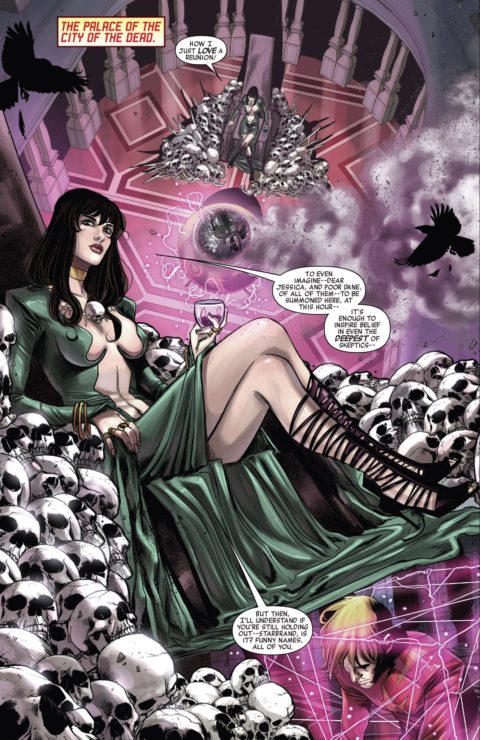 Morgan Le Fay is an immortal half-human, half-faerie. She is immortal, and has been one of Earth’s greatest magical users for millennia. She was trained by Merlin of Britannia, the Lady of Avalon, and even became the High Priestess of the Earth Goddess Gaea. With all of this training she is able to control any environment around her, can use impossibly powerful mind-control, can create illusions, and can invoke nearly any cosmic energies.

She was powerful enough to use the Crimson Bands of Cyttorak to bind Doctor Strange and an Asgardian God. Her power seems to know no bounds, and nothing will ever get in her way. Her power is far too great, to the point where she can, in some cases, even change reality itself. 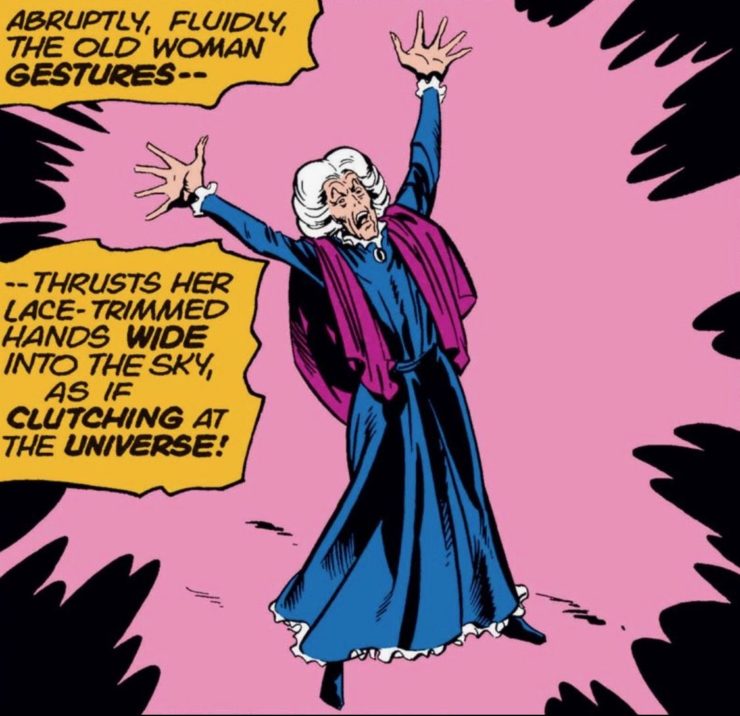 Agatha Harkness was at once believed to be a simple governess, aged but wise. She was hired by Mr. Fantastic to look after his son, Franklin Richards. She accepted the role of governess and planned to teach him in all ways she could. What the Fantastic Four didn’t realize is that she was an immortal witch, capable of magic unlike anything they had ever seen before. She wanted to teach Franklin to use his incredible powers, but unfortunately, she could not stay with him.

Agatha is able to use telepathy on an incredible level, even creating a connection with her pet cat, Ebony, who can himself turn into a powerful panther. She shares some of the greatest magical energy in all the world with only a few people. She also cares greatly for her students and protects them with her life constantly. The most powerful student she ever taught was Wanda Maximoff, the Scarlet Witch. 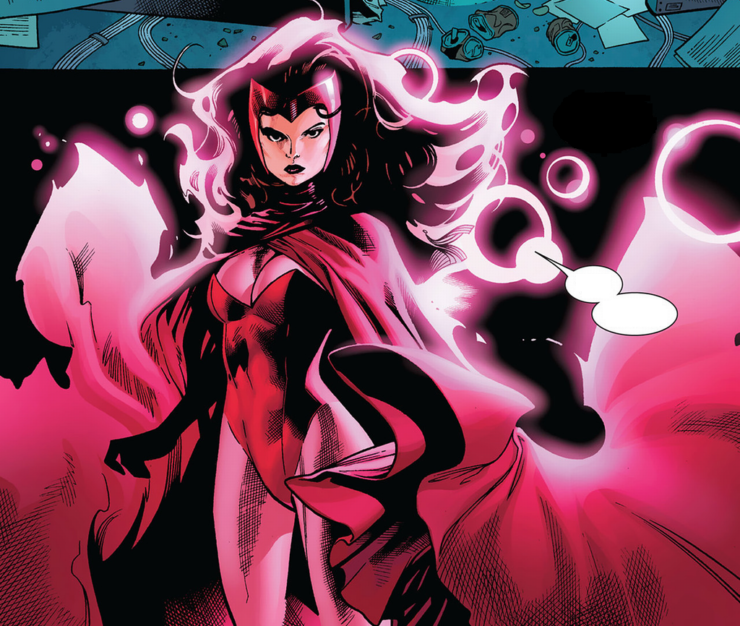 Scarlet Witch is arguably one of the most powerful witches of all time. She has the ability to change the probability within a certain range, called a hex-sphere. With this power, she can warp reality to her will. However, when coupled with the sorcery that she learned from Agatha Harkness, there is very little that Scarlet Witch cannot do. One of the most impactful spells she ever cast, coupled with her reality-warping power, decimated the mutant population.

While there were once millions upon millions of mutants across the world, she ended them just by saying, “No more mutants.” With three reality-warping words, there were only 198 mutants left in all of reality, and many who were once mutants were completely stripped of their powers. After M-Day, even Doctor Strange couldn’t change the world back to the way it was. There’s no witch quite as powerful as the Scarlet Witch herself!

So, who’s your favorite witch from Marvel comics? Let Your Geek Sideshow and tell us in the comments or in our poll below!

Game of Thrones Prequel News, House of the Dragon Announced, and more!