She’s not gritty, because teen-filled super hero movies don’t need that. Instead, she’s grunge. And she’s got the alternative attitude and counterculture comedy to prove it. Let’s take a look at some of Michelle’s funniest MCU quotes below.

“Too late. You guys are losers.”

Michelle’s first interaction with our heroes is to demean them. Ned Leeds and Peter Parker are staring wistfully at the beautiful Liz Allan when they realize their unwanted attention is probably creepy. They tell each other to stop looking, yet can’t tear their eyes away. Michelle forces them to quit it by telling them it’s definitely creepy, and that they’re losers for sitting alone and pining after a girl way out of their league.

Ned and Peter immediately point out that Michelle is sitting alone with them, too. They ask her for her reason, and she tells them quite plainly that she doesn’t have any friends. She doesn’t seem sad about it, simply practical. And her dry delivery of the whole exchange adds to the hilarity of the scene since Peter and Ned are both so over-the-top and silly. 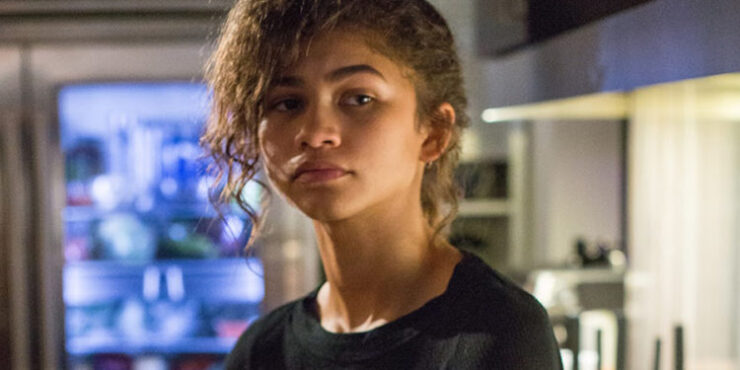 Michelle is never trying to be liked. She’s aware she doesn’t fit in, and still has so much confidence and comfort with herself. That’s her superpower — she seems to thrive off of other people’s discomfort. At Liz’s house party, Michelle makes an appearance even though that’s definitely not her crowd. She grabs some food, and that’s where she spots Peter and Ned.

In a callback to the cafeteria scene, Michelle mocks the boys for showing up at a lame house party. With wide eyes and indignant gasps, they again explain that she is also present, implying she is just as lame as she is accusing them of being. Unexpectedly, Michelle replies, “…Am I?” before fading into the crowd with her bagel. It’s such a weird and wonderful moment that you have to laugh.

“I just like coming here to sketch people in crisis.”

Michelle isn’t obsessed with Peter, she promises. She’s just observant. Which is why she follows him to detention and sketches all the kids — and teachers — in varying states of distress. Much to their chagrin, she’s kind of perfect at it.

This fresh take on the Marvel Comics character has given her many fun quirks and odd characteristics. This scene is just plain hilarious. Who voluntarily spends their time in detention? The somewhat antisocial Michelle Jones, a girl who loves history, conspiracy theories, and has quite the edge to her. And while she doesn’t have the facial likeness quite right, she’s got Peter’s pout down to a science. 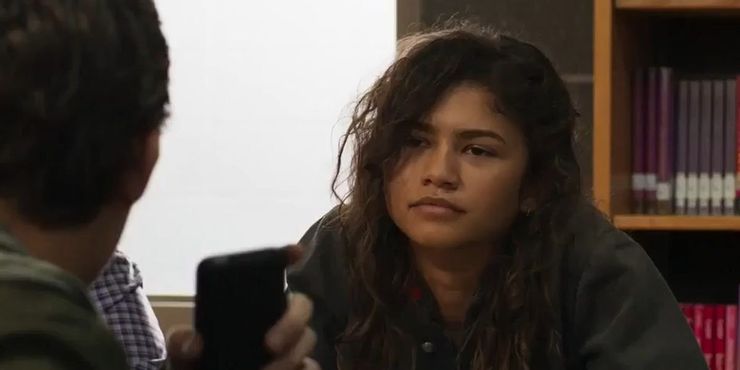 Spider-Man is famously one of the heroes most afraid to be unmasked — a storyline and fear that will be further explored in the upcoming Spider-Man: No Way Home movie. This scene near the end of Homecoming is a fun reminder of that, as well as a great clue into Michelle’s character and her relationship with Peter Parker.

Michelle stares suspiciously at Peter, asking him where he’s going in such a rush. As he stutters out a non-answer, she increases her scrutiny. Then she switches gears completely to tell him she doesn’t care. It’s a classic moment of friends messing with each other. The two actors’ brilliant chemistry makes it work, as well as the top tier dramatic irony when Peter walks away and misses Michelle’s knowing gaze. 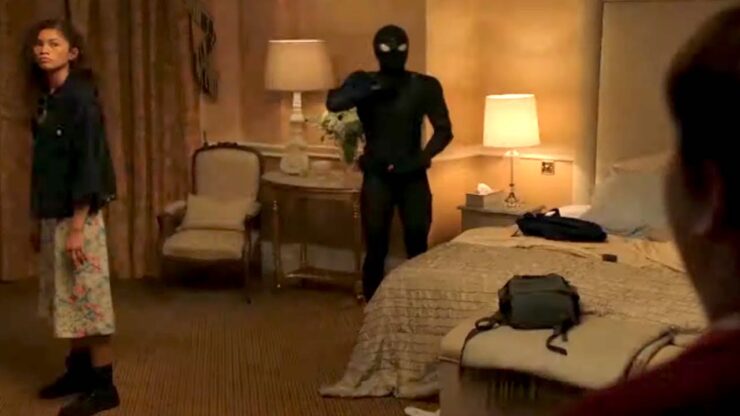 Peter Parker spends the majority of Spider-Man: Far From Home crushing like crazy on Michelle Jones. He’s also pretty worried that she’s picked up on the fact that he’s Spider-Man. For a person as smart and observant as she is, as the audience we’re kind of assuming she knows by now. Or else it’s weird that she hasn’t figured it out.

But in a crush confession gone wrong, the truth is revealed. Peter has to rush to save the day and Michelle follows him back to his hotel room, where he changes into the infamously dubbed ‘Night Monkey’ suit. Ned walks in on the two of them, covering nervously for Peter by calling the Stealth Suit a “costume … for the costume … parade.” But Peter then reveals that MJ knows because he told her. Instantly Michelle insists that she knew before she was told.

It’s a funny quote because MJ is compelled to prove her cunning. She’s usually so cool and collected, but around Peter she’s a little flustered. She’s a little more anxious to prove her worth to him. Obviously since they’re now dating, both their fumbling attempts worked to win each other over.

“I know a couple magic words myself, starting with the word ‘please.'”


Not many people would stand up to the Sorcerer Supreme, much less diss him. Hilariously, Michelle talks back to him. She doesn’t have patience for unearned authority, but she has plenty of earned confidence. That combination means when Doctor Strange yells at her, Peter, and Ned to “Scooby Doo this crap!” she doesn’t let it slide.

Michelle tells the grumpy wizard that the multiversal madness is his mess and promptly reminds him to be more polite. And Stephen Strange, once an ego maniac, actually listens. So while this quote is still super funny, it’s also a reminder that Michelle has a lot of courage and is committed to both the physical and mental well-being of her friends.

What do you think is the funniest MJ quote? Did we miss your favorite? Let us know in the comments, and don’t forget to Let Your Geek Sideshow!