DC Comics Bombshells series all started in 2011 at a convention. Artist Ant Lucia presented DC with some re-imagined designs of different heroines, presented as pin-up girls with World War II fashion. These stylish designs were quickly turned into a line of highly sought after DC Collectibles statues. 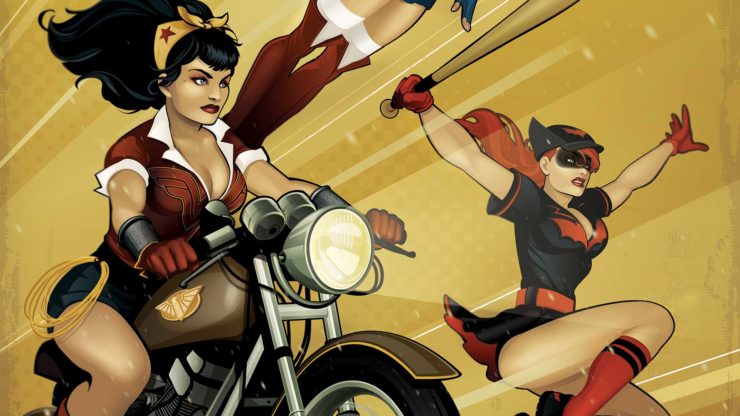 Soon, the statues served as inspiration for a well-written and popular comic series about the DC Bombshells initiative, gathering beloved female heroes from around the globe to save the world during the crisis of WWII. Written by Marguerite Bennett, with art from numerous talents like Laura Braga, Marguerite Sauvage, Mirka Andolfo, and more, many of DC’s most powerful women received alternate origins that made them a fearless part of the war effort- from newspaper reporters to nightclub singers, and from prisoners of war to leaders of their own rebellions.

The world of the DC Bombshells has exploded in popularity thanks to the comics and statues. Let’s meet some of the reinvented, revolutionized DC Comics heroines featured in this exciting collection! 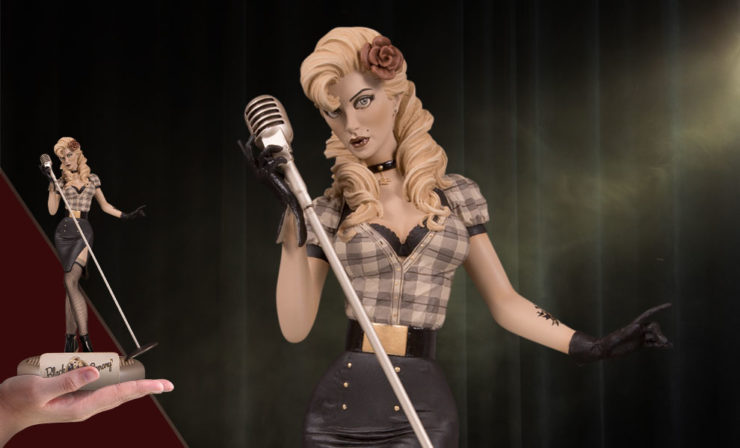 Black Canary has always had a powerful voice in one way or another. Even in the DC Bombshells universe, she is capable of her powerful Canary Cry. But in this reality, she also happens to be a well known singer!

Everyone contributes to the war effort somehow, and Dinah Lance works singing for the American troops all around the nation. In the comic series, she met with the other women of the Bombshells organization in Honolulu, Hawaii. The Black Canary Statue shows her in her element as a rockabilly songbird, painted in sepia tones to give her that vintage style. 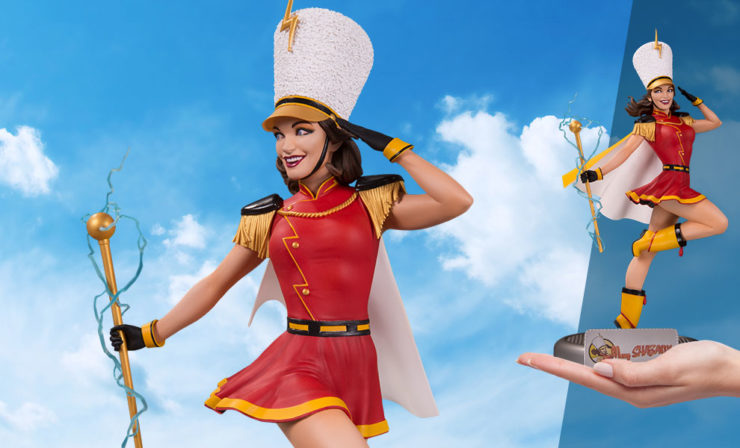 In the DC Bombshells universe, Miriam Bätzel lives in the Berlin Ghetto during the occupation of the Nazis. She is in charge of keeping watch over the other children, and she tells them stories to keep them calm. She tells them a tale of a powerful hero with the powers of Six Goddesses. As she recites the names of power, whose initials spell SHAZAM, she comes to realize that she has incredible superpowers of her own. She then becomes Miri Marvel!

The DC Collectibles Mary Shazam Statue depicts Mary Marvel as a cheerful and charming leader of a marching band, hoping to lift the spirits of those around her.  Her bright costume homages her classic comics appearance while incorporating electrifying elements of her new identity as a DC Bombshell. 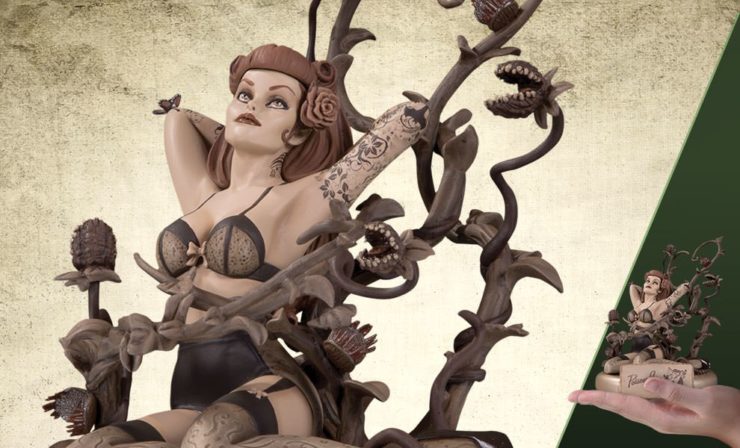 Pamela Ysley is a brilliant apothecary, who certainly has a way with plants. Her very scent was intoxicating to all around her — literally!

She was forced to smuggle and sell luxuries to the German soldiers, but eventually she couldn’t take it anymore, and poisoned the Nazis with her perfume. She teamed up with Harleen Quinzel to escape and together they helped the Russians during their time of famine, thanks to her talent for growing plants. Poison Ivy always has a trick up her (tattoo) sleeve.

The vintage-style Poison Ivy Statue depicts Pamela as a pin-up model, surrounded by a garden of grinning plants.  In any era, she’s a stunning and seductive figure with a definite gift for gardening. 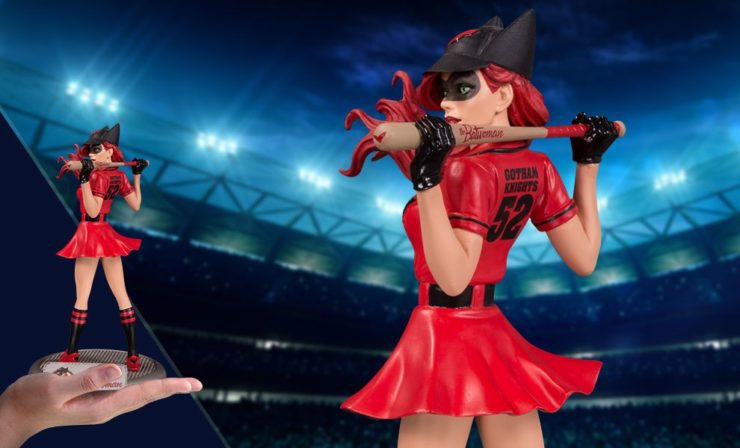 Kate Kane wasn’t called Batwoman because of Batman. Batman actually doesn’t exist (at least, not as fans usually know him) in the DC Bombshells world. No, she’s called the Batwoman specifically because she plays baseball!

Batwoman plays for the women’s softball team the Gotham Knights and runs Kane Enterprises, her company that is forced to support the war. She knows that her company is doing enough to save people’s lives, but she doesn’t feel like she herself is doing enough. So Batwoman fights villains as a part of the DC Bombshells initiative to do everything she can to save lives as many lives as possible.

The Batwoman Away Statue depicts Kate Kane in her alternate #52 uniform for away games with the Gotham Knights. Her hat and baseball bat feature her red insignia, as Kate Kane stands in a league of her own against the villains. 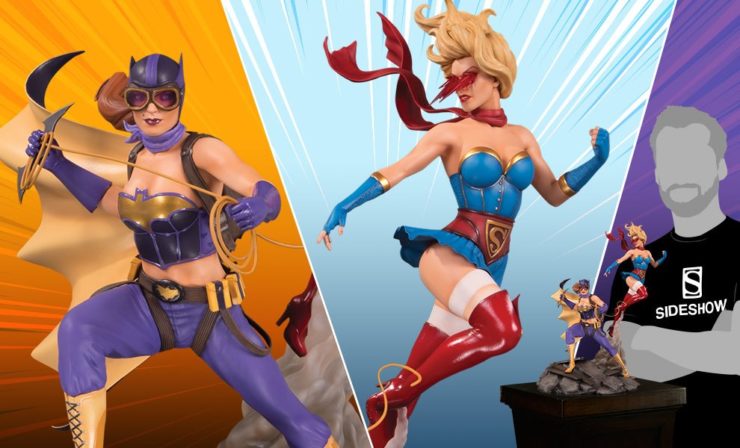 In DC Bombshells, Supergirl‘s spaceship doesn’t actually land in America. It lands in Russia. She is raised side by side with Stargirl, who’s name is Kortni Duginova, while Supergirl goes by the name of Kara Starikov. These two Bombshells were used by the Soviet Union as propaganda to boast of the strength of Russia and their ingenious scientists. They joined the Night Witches flying force, but eventually ran away after discovering how they were being manipulated into harming innocents.

Barbara Gourdon was a fantastic French pilot, talented enough to get the nickname Batgirl. She eventually fell in love with the German ace pilot Luc Fuchs, the Flying Fox, and together they flew in a number of daring missions until one day Fuchs disappeared in action. Barbara was obsessed with finding her lost love, and so she headed to the bogs of Louisiana to seek her missing co-pilot. It was later that Amanda Waller found her, and had her join a very special team.

This dynamic statue shows Supergirl and Batgirl not as soldiers from rival nations but as Bombshells united together in an effort to save the world! 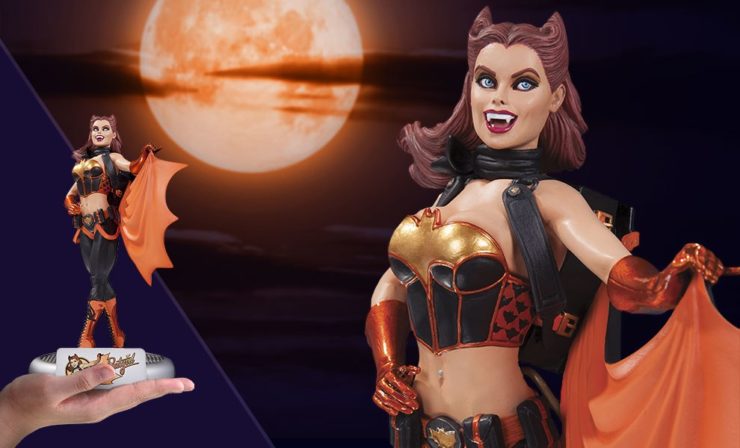 Batgirl‘s story becomes even more interesting, when you find out that she became a vampire! After losing herself in the bayou in search of Luc, Barbara Gourdon was turned into a vampire and became a recluse, fearing the monster she had become.  She took over an old mansion in the marshlands called Belle Reve Manor House, and was eventually discovered by Enchantress, Ravager, and Killer Croc.

Amanda Waller sought her out and tasked Francine Charles with bringing home the Batgirl of the Bog for their newest war-fighting team effort. Francine eventually found Belle Reve and talked Batgirl into joining the Bombshells’ newest tactical force- the Suicide Squad.  As a vampire, Batgirl is immortal, invulnerable, and an incredibly valuable asset to Waller’s latest project.

In the Halloween Batgirl Statue, we see her dressed in a truly vampiric fashion, showing us her fangs while her batlike cape emerges from a coffin on her back.

Who’s your favorite DC Bombshell? Let us know in the comments, and don’t forget to Let Your Geek Sideshow!

Get blown away by all of our DC Collectibles, and complete your collection. And watch the DC Comics Bombshells Collectible Story below!