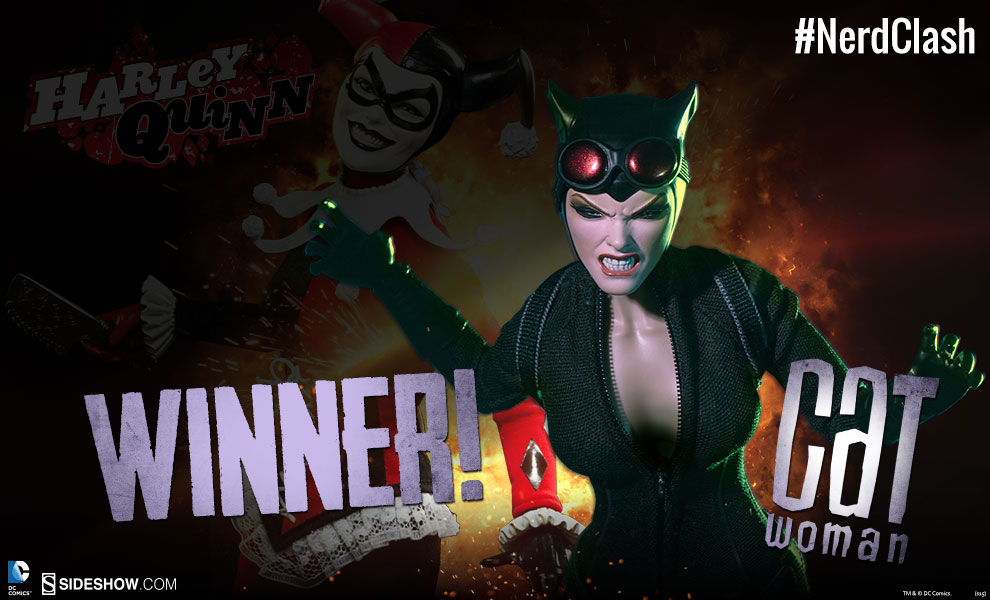 Valentine’s Day is just around the corner, and love is in the air, so naturally we’ve decided it’s the perfect time to hold another NerdClash battle – for your affection! This time we’re turning to the bad girls of Gotham City, to decide who can pull off the ultimate heist. We want to know…

Who can steal more hearts this Valentine’s Day – Catwoman or Harley Quinn?

UPDATE: Catwoman stole your hearts and the win this Valentine’s, with a 51.3% vote!

Of course, hearts aren’t the only prizes to be won here. We’re giving star-crossed lovers a chance to capture their favorite femme fatale with a Catwoman Sixth Scale Figure or Harley Quinn Sixth Scale Figure. Vote in our poll below, then join us on Twitter and compose a short love letter or poem to tell us why Catwoman is the purr-fect catch, or why Harley Quinn makes your heart go kaboom. Remember, you can only go for one…hell hath no fury like a Siren scorned. Here are the rules:

Please Catwoman lose the bat, and come stay with me, I want a figure like that. #NerdClash pic.twitter.com/FIPsYmS5zR

@collectsideshow #NerdClash Crazy in love,hardly describes The feelings I find Dwelling inside Harley gimme a sign That Puddin you're mine!

Congratulations to Doug B. from the California! You’ve won a Harley Quinn Sixth Scale Figure.

Fans across the web welcome Spider-Man home to Marvel Studios!