A long line of Iron Man armors and characters have made their way to becoming astonishingly detailed, high-end collectibles figures by Hot Toys, with each entry in the ongoing line being highly sought after, selling out, and often going for twice as much on auction and collector sites. Because there are enough people who are Tony Stark rich (and some pretending to be), Hot Toys has two new 1/6th scale figures to add to the Iron Man collectible family: Iron Man 3′s Pepper Potts and Iron Man Armor Mark IX.

Hot Toys puts almost as much effort into their packaging as they do their figures, always using the right balance of graphics and logos/lettering to make for an appealing display. Coming in at 11 inches wide by 20 inches tall, it’s a big ol’ box. The size of it alone instantly demands your attention. The main art on the front displays Pepper, cradling a damaged Iron Man helmet with the Mark IX armor standing protectively behind, while Tony Stark’s mansion is being demolished in the foreground – it’s like a cover to the most romantic metal album cover of all time. That art is nicely broken up with an orange stripe going through the middle of the scene with the films logo and product description. 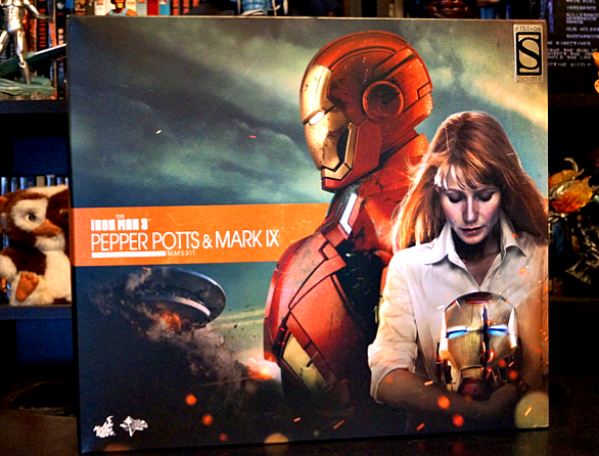 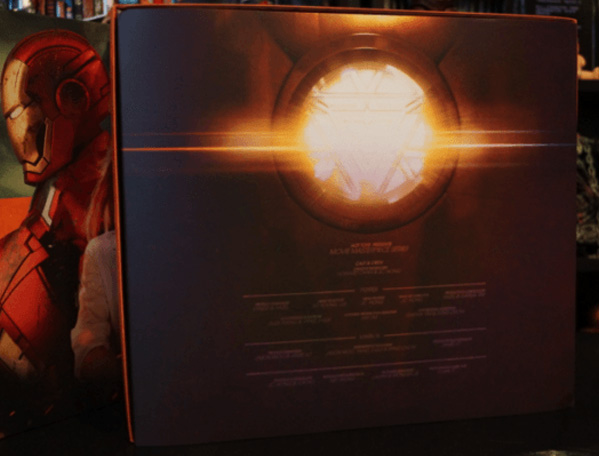 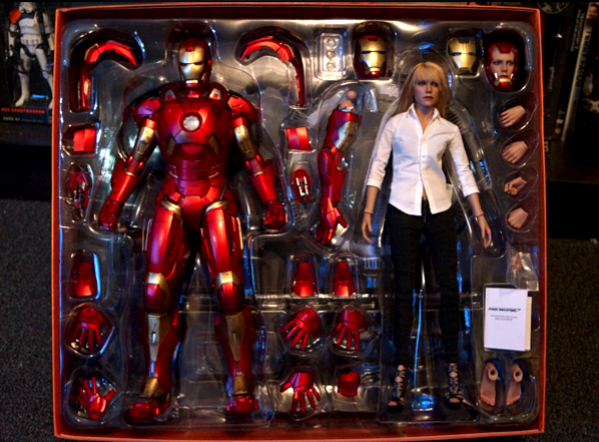 Slipping off the over-sized shoe-box styled package, is a graphical insert featuring Tony Stark’s heart – aka the Arc Reactor. Taking out the insert reveals Pepper and Mark IX armor encased in a plastic clam-shell. And not one of those clam-shells that require scissors or some sort of Iron Man-level tech to open. Each piece of plastic that houses the figures and their accessories is a separate layer that can be pulled apart. This means the figures are well protected, and that the packaging can be reused. Even rich guys and gals want to protect their investment. 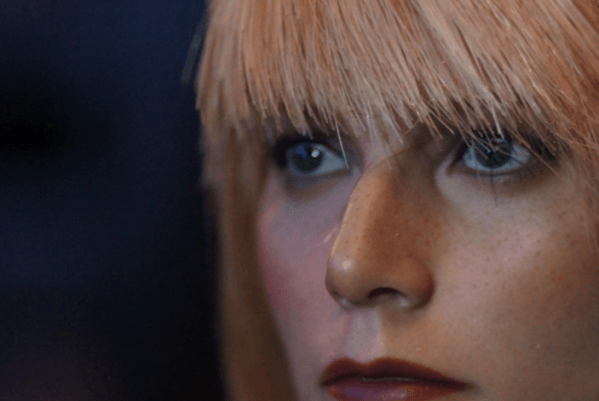 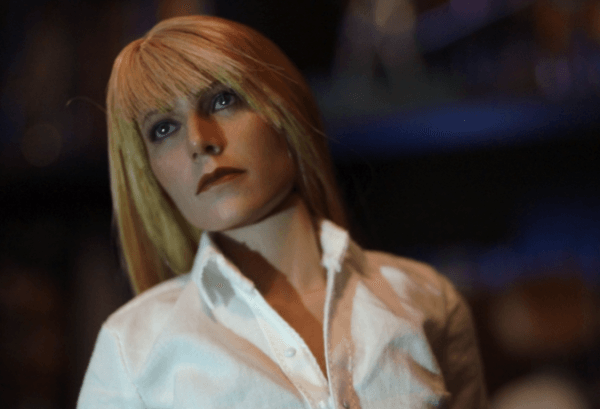 Pepper is an integral part of Tony Stark’s life. She runs Stark Enterprises and keeps Tony in check. She may not be a legitimate superhero, but what a super-heroic feat it is to juggle those two things. How’s the saying go: behind every great man is a great woman.

The figure is based on the likeness of Gwyneth Paltrow as Pepper Potts in the film, and features a newly developed head sculpt with long straight light reddish-blonde real fabric hair, finely tailored costume, an interchangeable Iron Man Mark IX right arm with LED light-up function, and figure stand. 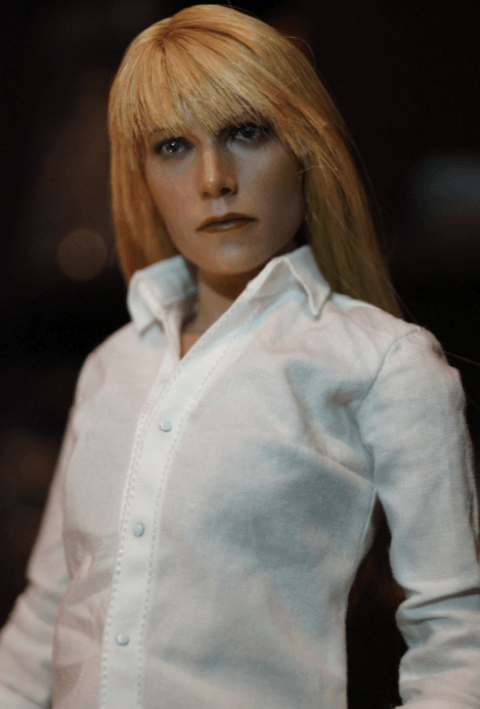 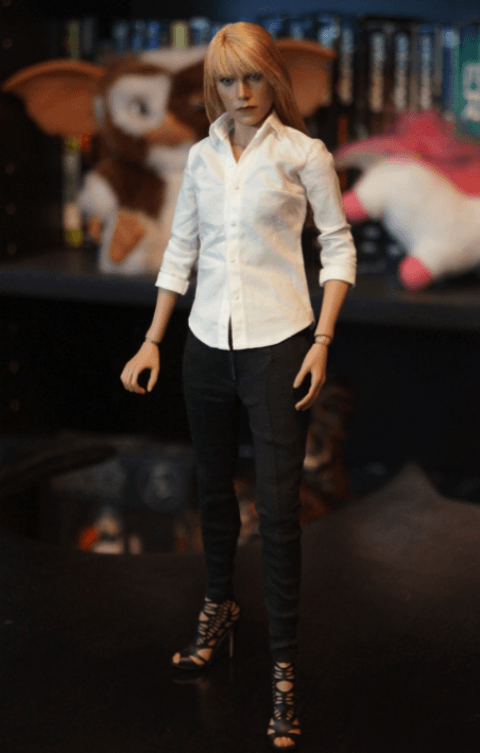 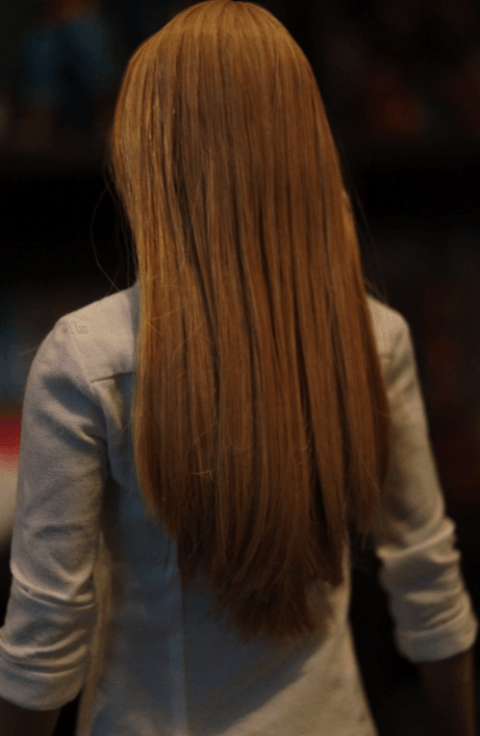 Without question, the very first thing that strikes a “whoa” response is the head sculpt. Soft skin, high cheek bones, feminine chin, luscious lips, bold beautiful eyes, cute freckles, and rooted blond/reddish hair with bangs all mirror how the actress looks EXACTLY. It’s actually kind of eerie how lifelike this face/head sculpt is – you’ll almost believe this figure will come to life and start talking to you about healthy living. 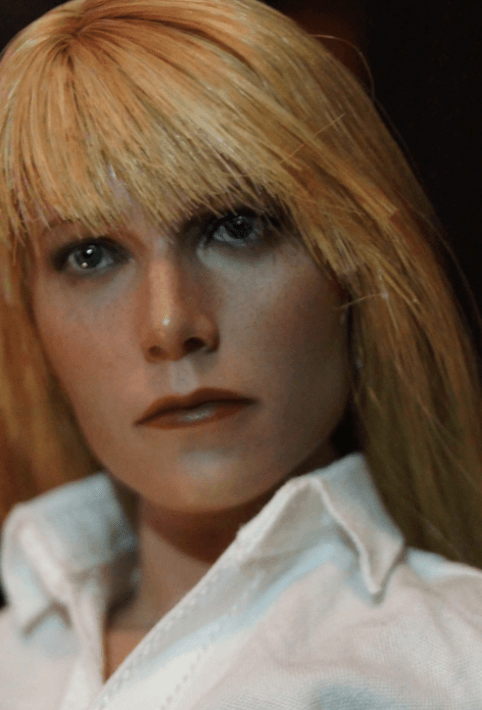 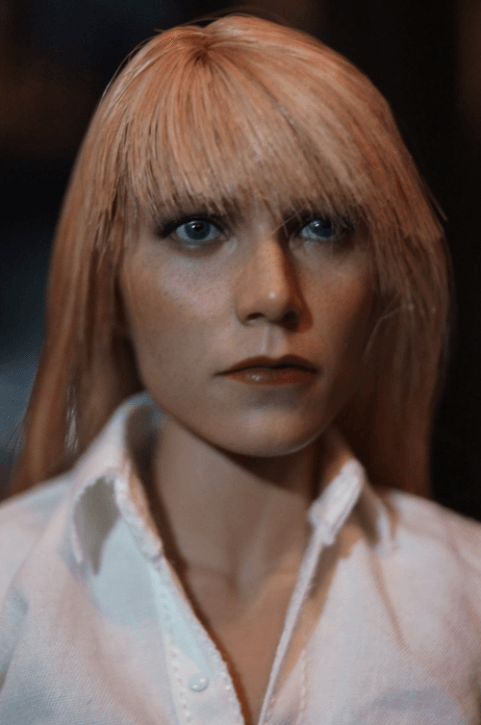 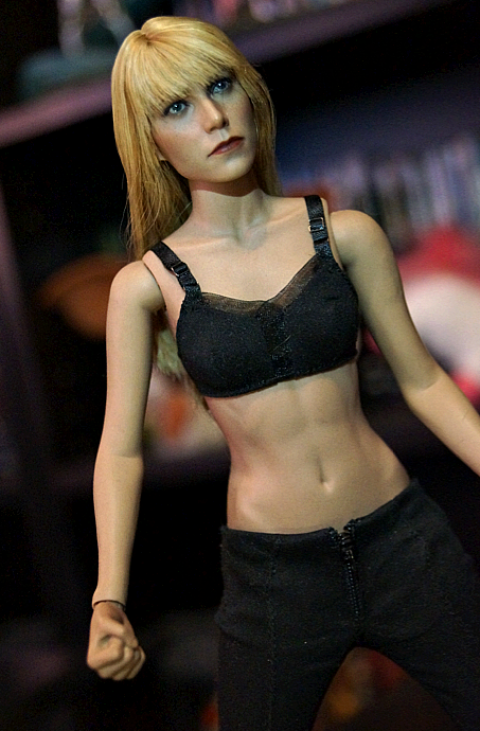 The frame and structure of the body is slender and curvy in all the right places, modeled after Paltrow’s skinny “I’m a Vegan and proud of it” figure. She is clothed in black business pants, white blouse, and open toed high-heels. If you want to re-enact the end of IM3, her blouse is removable, and you’ll find her wearing a black sports bra just like in the movie. All of her garb is real fabric and hand-tailored looking 100% like their life size counterpart.

Pepper Potts comes with quite the assortment. Included with this figure *cue the drumroll* is an attachable full-detailed Iron Man (right) arm with light up repulsor hand, a manila folder with numbers and stats on A.I.M. (with wee tiny but legible text), 2 Iron Man helmets – 1 with with enclosed faceplate with light up eyes, and the 2nd featuring an open removable faceplate with alternative and equally detailed Pepper Potts head sculpt. Last, but not least, a pair of bare feet. 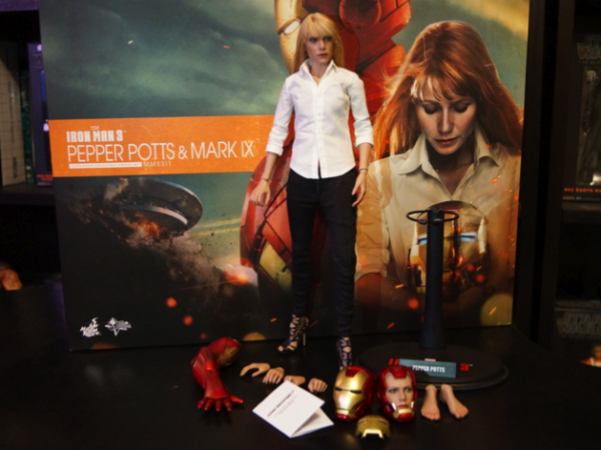 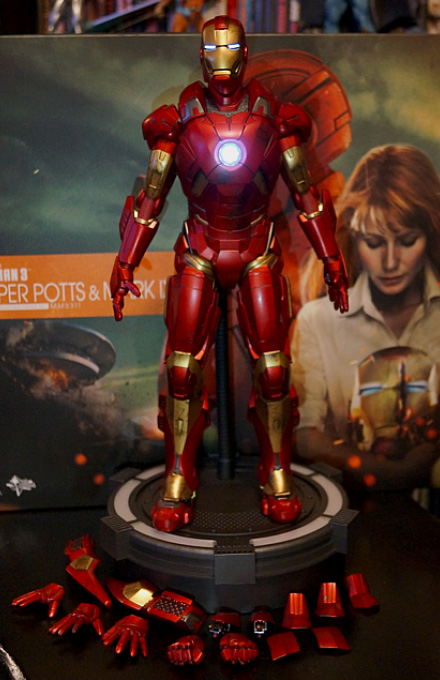 Pepper comes with the IX suit which can be seen in the film’s final showdown. Out of all the various suits of armor featured in the movie, including the mainly featured Mark XLVII, there is nothing that quite competes with classic red and gold color scheme. Someone sees this displayed and they’re gonna know “hey, that’s Iron Man.” The figure features a sophisticated sculpted armored body, specially applied metallic red, gold and silver colored paint with weathering effects, great articulations with armor parts linkage designs, LED light-up functions on various parts of armor, and large circular display base.

Iron Man is the near-impossible creation of a badass, genius, multi-billionaire scientist, so, if you’re going to pay homage to anyone of his suits, you better do it right, and Hot Toys did just that. Pretty much everything that you see (within reason) on the suit that you would see in the movie, is on this collectible figure – from forearm missiles and light-up repulsors in the palms and arc reactor in the chest, to working air flaps on the shoulders and back, totaling over 30-points of articulation, three different light-up features, interchangeable shoulder flaps, and three different hand options. Even the eyes light up! 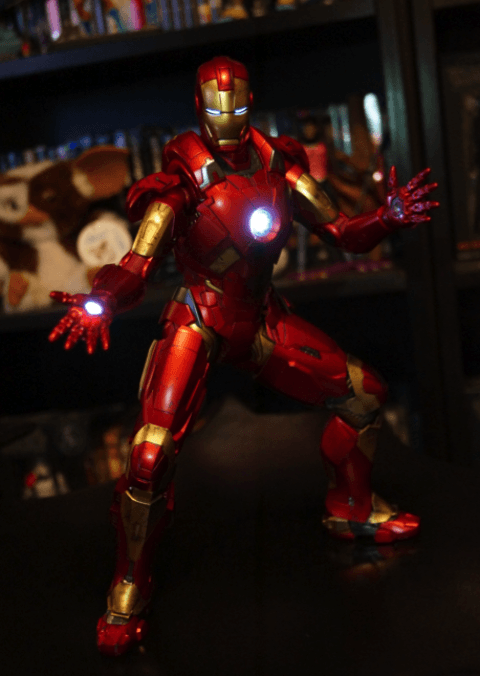 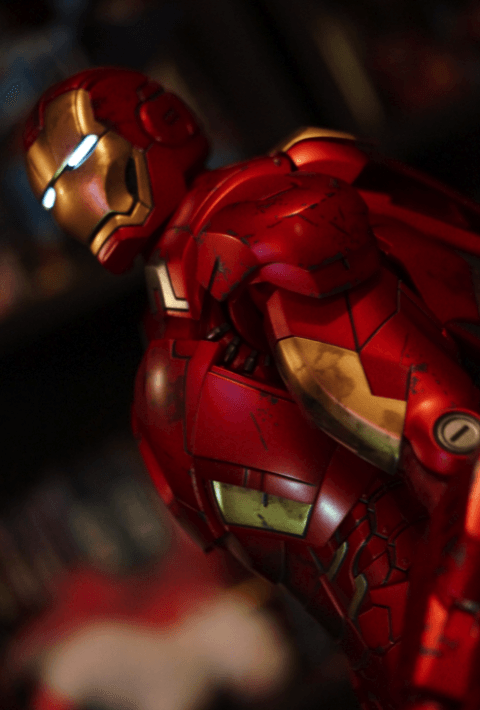 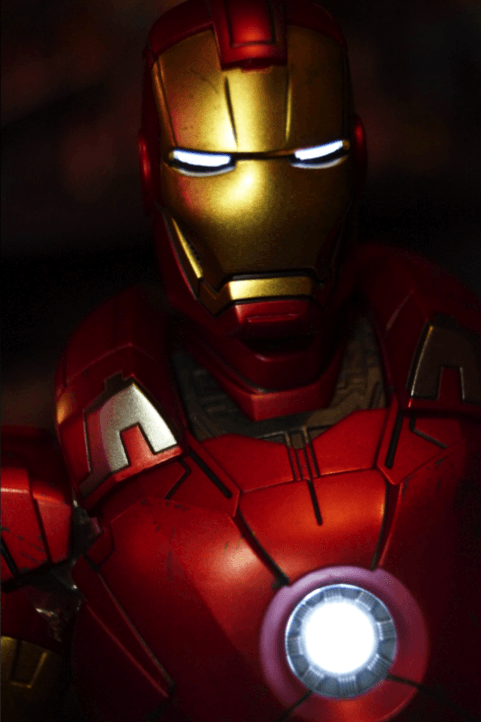 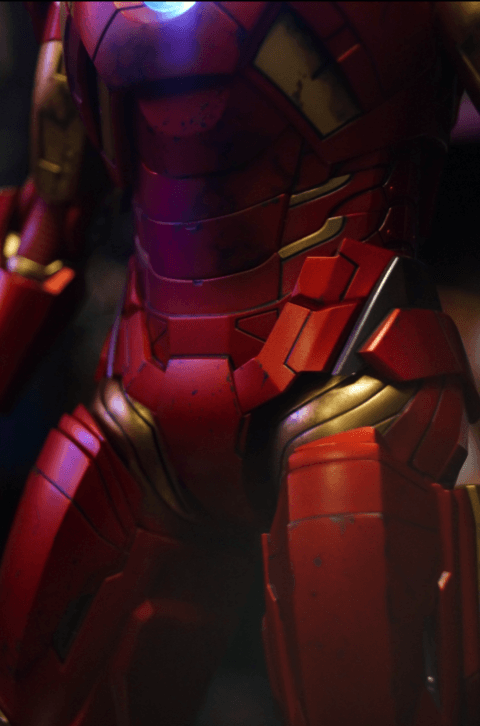 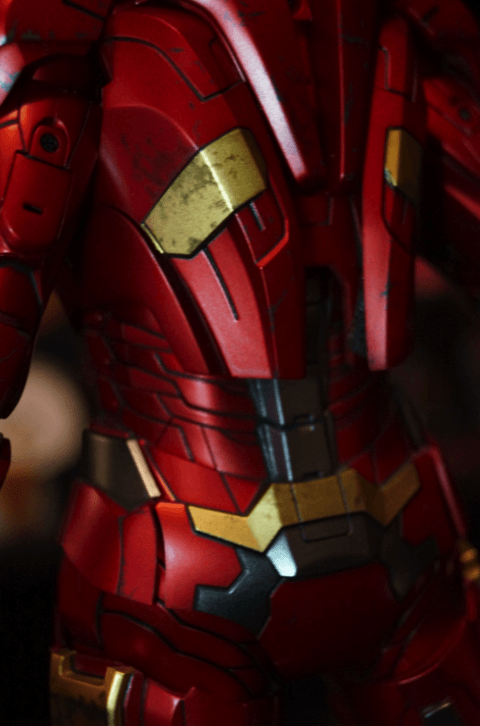 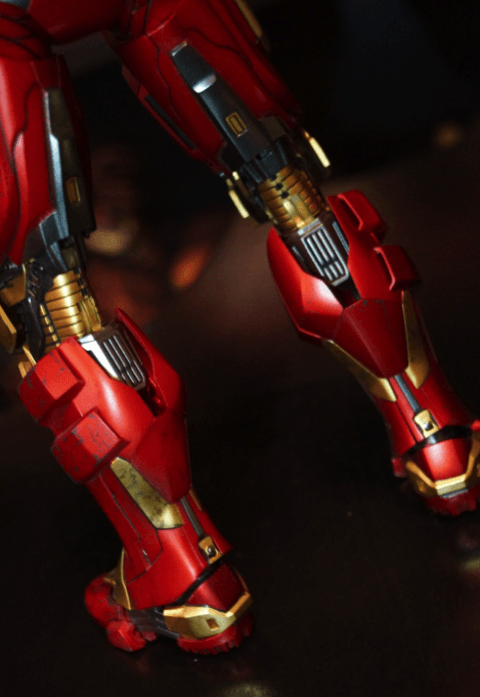 If you’ve never owned a Hot Toys Iron Man figure before, then you should know, every part of the figure that lights up has its own battery compartment. Get out your eye-glass kit screwdriver, stock up on replacement batteries, and take a few deep breaths. Battery installation takes a steady hand and a little patience. The panels are easy enough to access, but need to be unscrewed, and be careful not to lose the screws, they’re tiny! It also take a little finesse to get the multiple batteries in. 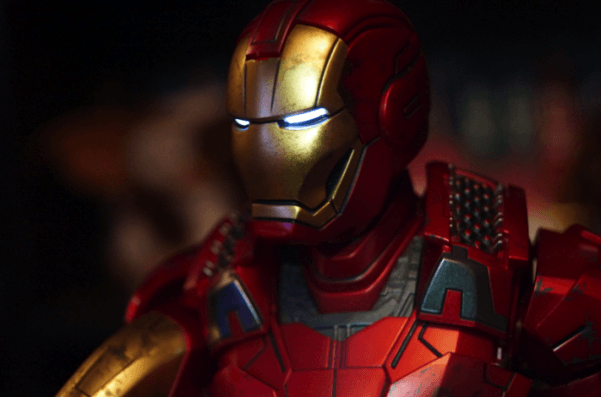 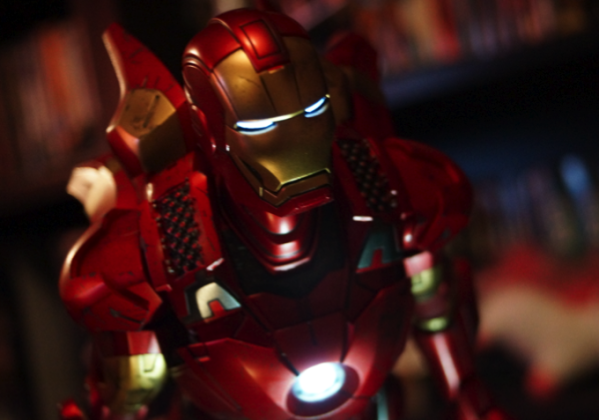 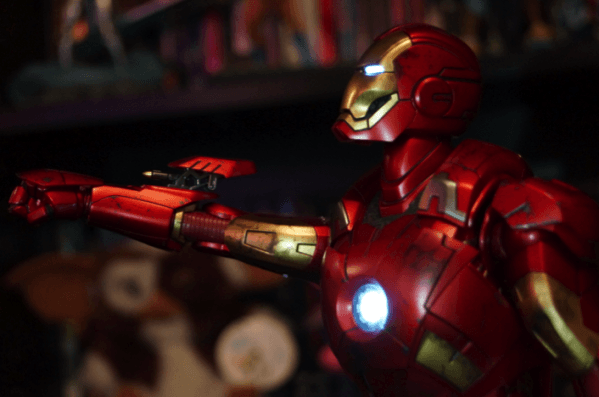 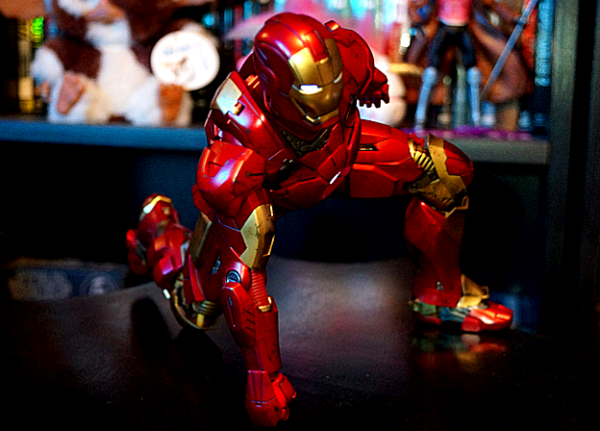 CLOSING THOUGHTS
This is truly an awesome, eye-popping, jaw-dropping, and “whoa” enducing figure set. Both figures are prime examples of what make the Hot Toys Iron man line so popular – it’s their commitment to hyper-realism and 100% screen accuracy without compromise. Whether you’re new to the Iron Man line, this is your first Hot Toys purchase, or even if you’re a repeat customer, you’ll be astonished.