The Powerful (Human) Green Lanterns of the DC Universe

Over the years, more and more humans in DC Comics have taken up the role of the protectors of the galaxy: The Green Lanterns. Green Lanterns are powered by a Green Lantern power battery, and connected to the battery through their Power Rings.

Quite a few of these Lanterns have exemplified their true willpower in unique and unexpected ways, and so let’s take a look at just a few of the many human heroes and the ways they’ve used Green Lantern‘s Light! 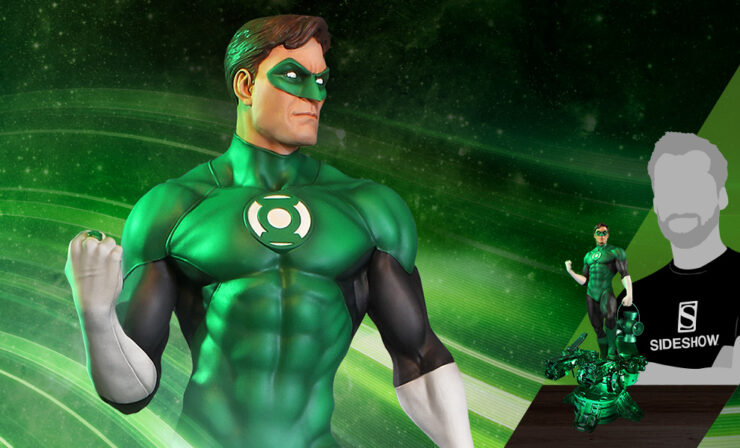 A reinvention of the Green Lantern of the Golden Age (Alan Scott), Hal Jordan is the first Green Lantern whose power came from the Green Light of Will. He is the classic Green Lantern that everyone knows and loves, and he has been a pivotal force for good for generations. He has saved the world as a hero, endangered it as a villain, and then saved it all over it again. His stories span the entirety of the known DC Universe.

His connection to the Green Light of Will is so strong that even without a charged Lantern Ring, Hal can transform his own body into a construct. He can make himself effectively one with the Green Light of Will. He has made his own ring, and he is his own ring. He constantly overrides the programming of the rings because he IS willpower. He has lead the Green Lanterns before, and he will continue to be one of the most iconic and powerful of them all. 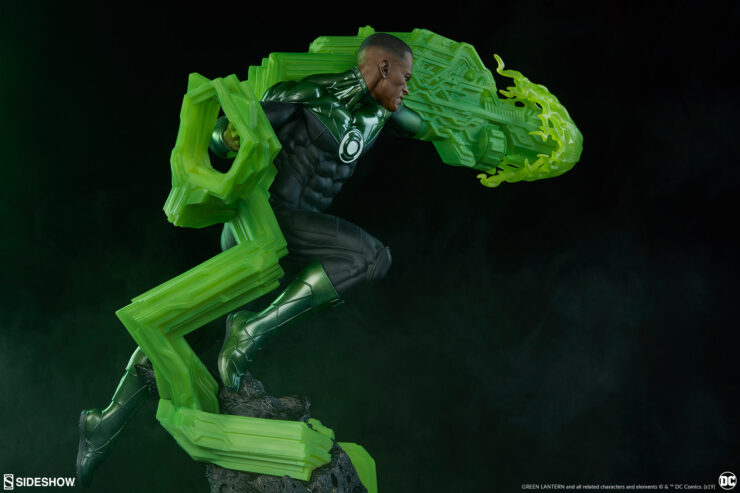 John Stewart wasn’t the first choice for Earth’s Green Lantern. And yet, when Hal Jordan alone wasn’t enough, John Stewart stepped up to the plate with a new perspective. He brought his military and architectural experience to the forefront of imagination. It’s said that when he builds a construct, he builds every single nut and bolt and screw.

John Stewart’s constructs are arguably more sturdy than any other Green Lantern’s constructs due to his method of building each part of it. But he has done much more than build complex Kryptonian machines. He has also used a willpower greater than his ring could handle. He has successfully created planets, even a galaxy for a moment in time. There are few Green Lantern with a hard and steely will like John Stewart’s. 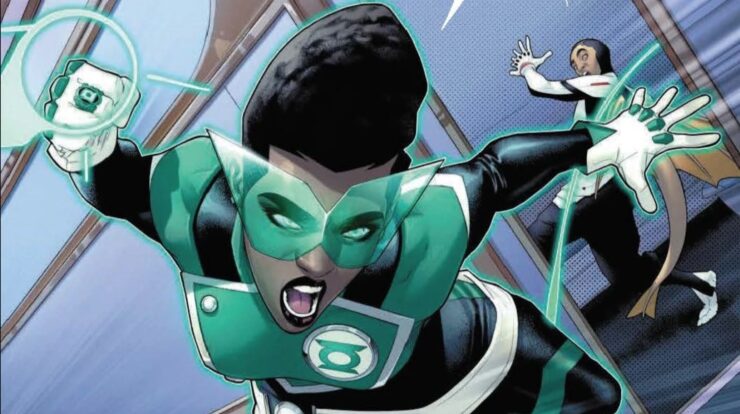 Sojourner “Jo” Mullein is a particularly unique Green Lantern. There is still quite a bit of mystery behind her character, and we won’t spoil anything about Young Animal’s Far Sector at this time, but we can certainly look at just how powerful Jo Mullein already is.

First of all, it should be noted that her power ring is different than other Green Lantern rings. Her ring actually recharges itself! But its power is much more limited, and she has to be aware of its limits. Even with that, she destroyed some futuristic alien military tanks with a single beam from her ring. Her constructs are sometimes unpredictable due to this unique ring, but her willpower cannot be questioned.

Stationed in the City Enduring, a society that has turned off the emotions of its citizens, Jo is the only person who can legally feel. Fear, will, anger, hope. Jo alone is able to exhibit her power in this way. She has been given a Green Lantern Ring unlike any other, and only she has the true willpower and ability to wield it. 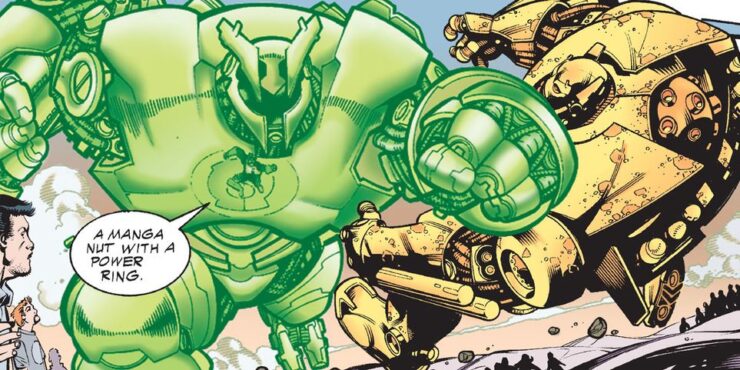 Kyle Rayner is an absolutely incredible Green Lantern. Of course, he’s not even a Green Lantern these days — he’s a White Lantern. But that’s a story for another time. When he was the leading Green Lantern, he was known for his incredibly creative constructs. He was an artist as a young man and he brought his artistic vision to his constructs.

He has created Giant Mechas, firefighters, a hand to draw more constructs, and even a floating head drinking water from a flood. His creativity knows no bounds, and that’s part of the reason he’s not shackled to the powers of a single Lantern Corps. He understands the power of creation, and with it, he understands the White Lantern power of Life. 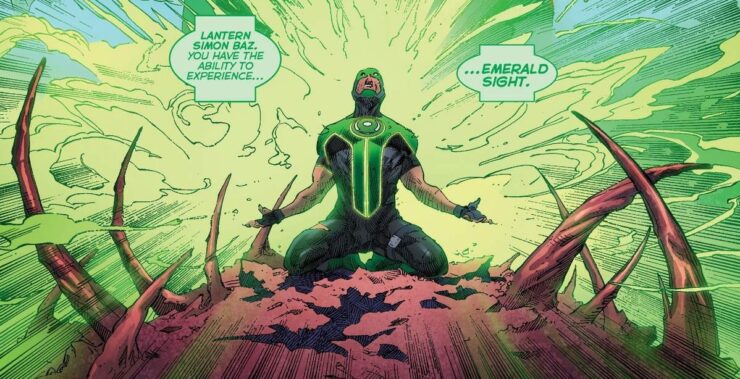 Simon Baz has not been a Green Lantern for a particularly long time. In fact, he is known colloquially as the “Green Lantern with a Gun,” who carries a firearm because of his distrust of general authority. He hasn’t had much time to show off impressive feats of strength or unique constructs of any particular kind.

Instead, Simon Baz has shown us that the Green Lantern power of will can be used to accomplish nearly anything, so long as the ring’s wearer wills it. In his early days as a Green Lantern, he was able to wake his brother-in-law up from a coma, healing him from whatever ailed him. He can heal people with his will. And most interesting of all is his ability to use Emerald Sight, which is an extremely rare if not entirely unseen Lantern ability to see the near future. 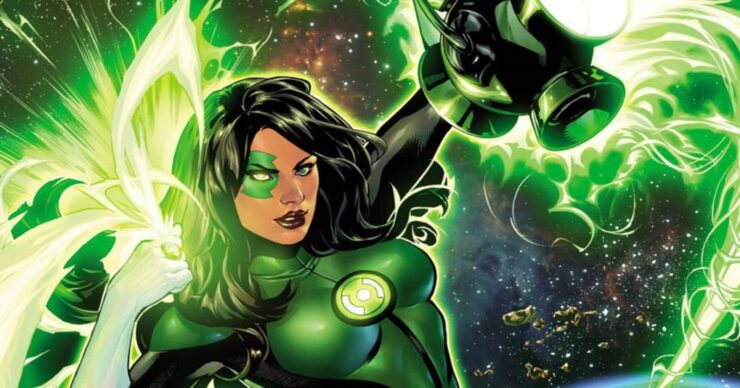 Simon Baz and Jessica Cruz are patrol partners, though it wasn’t originally by choice. Hal Jordan assigned them to be partners and gave them a Lantern that required both of them to be present to recharge their rings. Jessica has witnessed terrible atrocities and struggles with intense anxiety and PTSD, but that doesn’t stop her from having a unique control over the emerald light.

She was able to survive wielding the dangerous Ring of Volthoom, and she even came back from the dead after being killed by Darkseid’s Omega Beams. She can now shoot Omega Beams of her own. As a Green Lantern, Jessica Cruz is able to connect with and summon people from The Green Realm. The Green Realm (not to be confused with The Green, of Swamp Thing fame) is where the souls of consciousnesses of the previous Power Ring hosts reside. She can also banish others to The Green Realm.

Who do you think is the most powerful Green Lantern? Which members of the Green Lantern Corps, human or alien, is your favorite? Let us know in the comments, and don’t forget to Let Your Geek Sideshow! 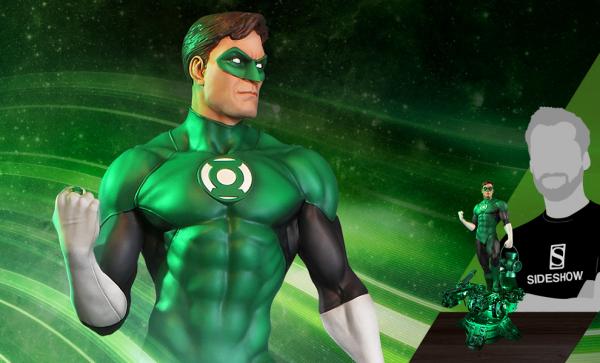