Please note the following article contains significant spoilers and plot points from episode seven of What If…?

In a world where space, time, and reality itself are so easily manipulated, there’s comfort to be found in things that are absolutely true. For example, Thor’s ample golden locks are always long and luscious and he will always refer to Rocket Raccoon as a rabbit. Raccoons just aren’t a thing on Asgard, apparently. However, in the timeline of episode 7 of Marvel’s What If…?, a critical event shifts the dynamics we’re familiar with and Thor’s defining relationship is altered. He and Loki are not brothers.

At least, not brothers in the official sense. “What If … Thor Were an Only Child?” shows the Odin of this timeline deciding to return the infant Loki to the Frost Giants, thereby creating a universe in which Thor and Loki do not grow up together. Without Loki to balance his inherently playful nature, Thor completely gives in to his hedonistic side and becomes Party Thor, a down-to-party dude who doesn’t take life too seriously, even if he is the Prince of Asgard.

Dr. Jane Foster detects an astro-nomaly among the stars, the same type of disturbance that previously caused the annihilation of Star Alpha Icarus. Moments later, the alien invasion that Jane predicted (and tried to warn S.H.I.E.L.D. about) happens. Darcy, forever trolling, references Poltergeist with, “They’re heeeere.”

An other-worldly beam transports shadowy figures right to the center of the Las Vegas Strip, where the leader of the invaders tells frightened human onlookers that their dull lives have come to an end … because the party is about to begin! And with that, Party Thor arrives.

What Could Go Wrong?

We’re taken back to Asgard, before the thunderous festivities begin on Earth, to a scene with Frigga, Odin, and Thor. Frigga is helping Odin fall into his restorative slumber, the Odinsleep, while Thor watches. After the All Father’s eyes close, Frigga announces she’s leaving to celebrate the solstice with her sister and that Thor, the Prince of Asgard, is about to get a taste of ruling the realm in his father’s absence. She warns Thor to behave and to simply study the Nine Realms while she’s gone. Thor quickly assures her that he will of course do just that.

Once Frigga leaves with her attendants, Thor, Lady Sif, and the Warriors Three plan their party on Midgard, a “backward, backwater” planet that nobody pays attention to — not even Heimdall. Though Hogun tries to be a voice of reason, this Thor is determined to have some fun. As they’re planning inside the Asgardian palace, pay close attention to the background. A certain all-consuming gauntlet lies in wait, and it looks as if all the stones are in place …

Back at Thor’s party in Vegas, Jane attempts to reason with the first alien to have arrived on the scene, but once she locks eyes with Thor, she quickly loses focus — and who could blame her? With a hair flip that could melt Jotunheim glaciers, Thor is irresistible even to a level-headed astrophysicist with multiple PhDs. Likewise, Thor is immediately captivated by Jane’s astounding intellect. Once he looks into her eyes, which he likens to “watching the birth of two stars on the edge of the galaxy,” their fate together is sealed.

What follows is a series of cameo-filled party hijinks that make The Hangover pale in comparison. We see Jane and Thor vibing on the dance floor, Nebula hitting up the casino, Volstagg flailing through the air on a hydro jetpack, all while Grandmaster spins a bumpin’ DJ set at a foam party. In a blink-and-you-miss-it scene, Darcy and Howard the Duck even progress from happy hour nachos to a wedding officiated by Vegas Elvis. The night ends with Jane and Thor getting the cutest matching tattoos in all Nine Realms.

But every epic night must come to an end, and the next morning Maria Hill shows up at Jane’s hotel doorstep. Hill demands the help of a very hungover Jane because the extraterrestrial threat that she had previously predicted is finally coming true. Jane questions how much of a threat Party Thor could really be, so Maria fills her in, now that she’s acting director of S.H.I.E.L.D.

Turns out Thor’s “party atmosphere” (as Agent Coulson puts it) has spread across the globe. First, Nick Fury attempted to intervene until he was knocked out of commission by Korg doing a cannonball. And as the Asgardian party raged on, chaos descended across the planet, from big cities to obscure regions like Pennsylvania Dutch Country. Maria, sensing that the next step needs to be taken in order to stop Thor, sends out an SOS on the Captain Marvel beeper.

You Gotta Fight, For Your Right … 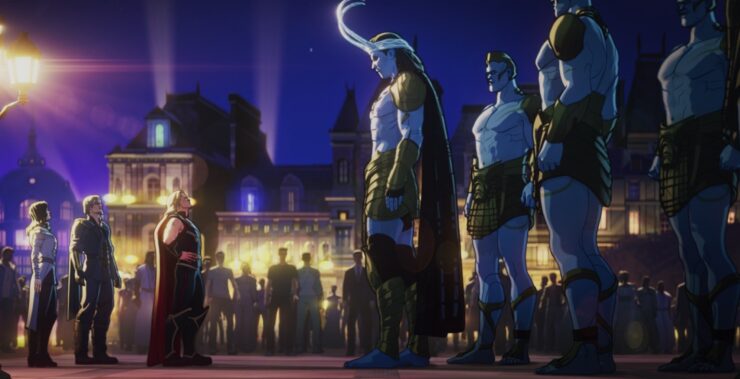 Meanwhile, in Paris, Thor’s party is interrupted by a new guest: Loki and his posse of Frost Giants. For a moment, the air is incredibly tense between Thor and this new, looming, and entirely blue Frost Giant Loki until he breaks the ice by greeting the “butt-ugly blue popsicle stick.” They laugh and embrace jovially before a boom erupts in the sky. 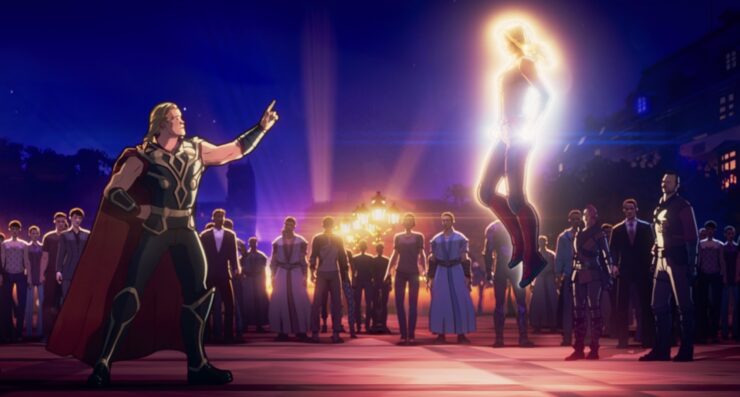 Captain Marvel makes her grand entrance and tells Thor that the party’s over. Of course, this announcement doesn’t sit well with the God of Get-Togethers, so naturally a colossal fight breaks out between the two. Punches are thrown, egos are bruised, and their battle quickly moves from Paris to the United Kingdom to the American Southwest. While they briefly face off among the iconic monoliths of Stonehenge, Thor boops one of the stones, or what he refers to as “weird rocks.” Captain Marvel quickly loses her temper with this immature behavior. She knows this battle won’t be won through brute force alone so she returns to Maria, Jane, and Darcy to refine their plan.

As Maria and Carol conspire on how to bring Thor down, Jane calls him to get the real story. After all, the fun-loving himbo she’s fallen for couldn’t possibly have destroyed an entire star, right? Thor reassures Jane over the phone that the destruction of Alpha Star Icarus wasn’t his fault … or at the very least, nobody got hurt. Jane is relieved by Thor’s response and before she hangs up to tell Maria she commits the early-dating mistake we all fear: the too-soon, accidental “love you.” Their enamored faces in this split-screen moment are simply priceless.

Maria, however, is not as taken by Thor’s charm, and she insists that the best plan is for Captain Marvel to lure him into a remote area and blast him with nuclear weapons. Jane is horrified at this extreme measure and when she voices her opposition, Maria has her and Darcy removed from the operation. Briefly, viewers are left to wonder whether Jane will fall victim to the curse of the What If…? love story, in which a person’s overwhelming love proves to be the deciding factor in a universe’s utter destruction.

Fortunately, Darcy’s wisecracking pop culture knowledge of ’80s teen movies saves the day (in a move very similar to Peter Parker’s vital movie trivia tactics). Darcy recognizes that Thor isn’t any more dangerous than a mischievous teenager and wonders out loud, “Too bad we can’t call his mom.” Jane quickly gets to work on a means to contact Heimdall so she can get Frigga’s help in controlling Thor.

As Jane and Darcy transmit their interdimensional signal, the Frost Giants send London’s Millennium Wheel rolling down the South Bank of the Thames like a Hot Wheels toy. Party Thor’s shenanigans are wreaking havoc across the globe: Surtur chats up the Statue of Liberty and plays limbo with a power line, Loki turns the Gateway Arch in St. Louis into a gigantic slingshot, and the god of thunder himself prepares to use the Sydney Opera House as a Slip ‘N Slide.

Just as Thor’s about to launch, Captain Marvel whisks him away to Siberia as Maria counts down to the nuclear attack against him. Fortunately, Jane reaches Frigga just in time. With the help of Heimdall, Jane crashes Frigga’s solstice gathering, which looks like a scene straight from the Real Housewives of Asgard. As Frigga and her gals are pouring back the wine, Jane warns her about Thor’s antics.

Frigga then appears to Thor using her magic and chastises him for his behavior. Thor, like every guilty child, denies his wrongdoings and insists that he and his “study group” are doing a “cultural exchange” on Earth. Frigga is skeptical of her son and decides she will visit Earth to see for herself.

This episode concludes its “party atmosphere” problem as every ’80s teen movie does: A parent returns home after the kids clean up their mess in a desperate frenzy, and nobody is the wiser. Instead of the high drama of previous episodes, this What If…? feels more like Thor Odinson’s Day Off or Fast Times at Asgardian High. Somehow, Thor convinces his party pals to help him clean up the most ill-advised house party in the planet’s history, and Captain Marvel even plays along with Thor’s good-natured coverup. Thor nearly gets away with it too, despite Frigga being an all-knowing, all-powerful witch, but she surely is not fooled by the appearance of a fabulously decorated Mjolnir.

As The Watcher states at the beginning of the episode, “More than battles won or lost, it’s relationships that truly define a hero — the people who shape them, their stories.” The people around us, those closest to our lives, influence us in ways that are easy to see and at the same time impossible to measure.

It would seem this episode might end on a happily ever after note, and even The Watcher is visibly confused by this unforeseen cheerful ending. Compared to the reality-shattering grief of Doctor Strange or the desolation of the zombie apocalypse, this episode’s content remained relatively lighthearted.

But of course, that could never be the case. As Thor walks away from Jane’s trailer so they can both prepare for their first date, Ultron blazes onto the screen. He is flanked by numerous Ultron drones and he is empowered by all the Infinity Stones, basking in their cataclysmic glow. The most disconcerting detail is that it also appears Ultron has achieved his merge with Vision, an unspeakable trifecta of evil factors.

Is he from another universe or is this a version of Ultron who took advantage of S.H.I.E.L.D.’s preoccupation with Party Thor? This Ultron could be the first multiversal crossover, but it also fits Ultron’s character to sneak behind the scenes of a major distraction. Perhaps episode 8 will reveal more.

This episode provided viewers of What If…? with some much-needed variety at this point in the series. It cut through the heaviness of the last few episodes with light-hearted action and hilarious hijinks. We even have a whole new set of nicknames for the golden boy of Asgard — Spicoli, Whitesnake, hotshot, lughead, Kappa Kappa Frat Freak, and Tiny Thunder stand out in particular.

And still, episode 7 delivers that ominous note of speculation that pops up throughout What If…?, compelling viewers to confront the relationships they’ve taken for granted and to fear the repercussions of a single decision.

Would you hang out with Party Thor? Should Loki stay blue? Let us know in the comments, and don’t forget to Let Your Geek Sideshow!