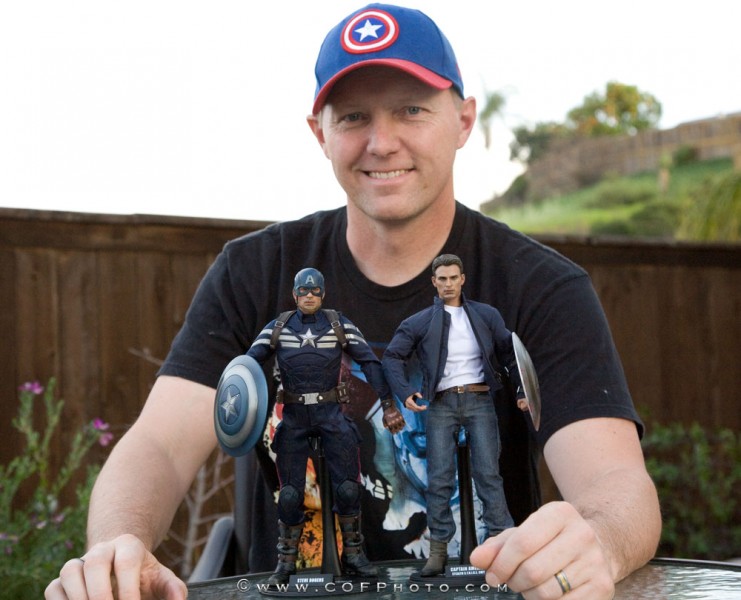 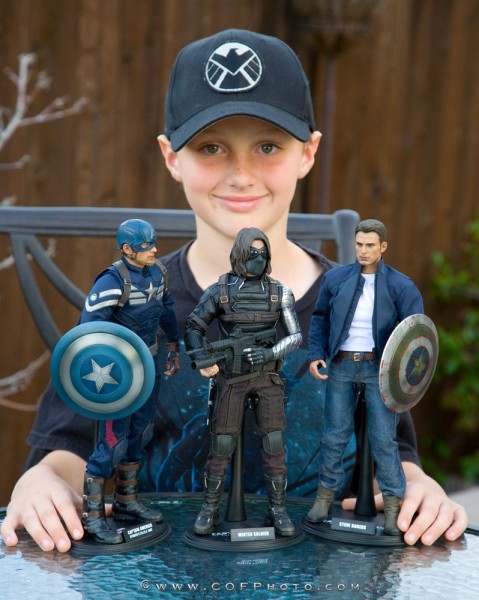 Meet the Richter boys, our favorite father-son cosplayer and collector duo from San Diego, California! Fans of all things superhero, 8-year-old Gavin Richter and his father Shawn spent an afternoon posing Hot Toys figures from their number one Marvel film – Captain America: The Winter Soldier. See what they had to say below about these new additions to their collection!

In addition to collecting, Gavin and I cosplay at all of the Southern California comic conventions. Since Cap and Winter Soldier are two of the characters we enjoy cosplaying, we were really looking forward to adding the Hot Toys Winter Soldier sixth scale figure to our collection, as well as the Captain America and Steve Rogers set. 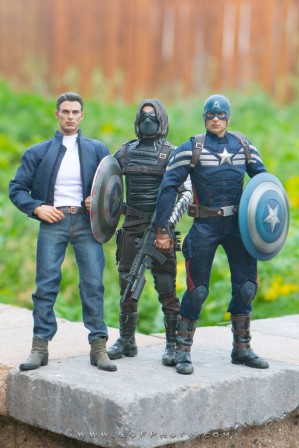 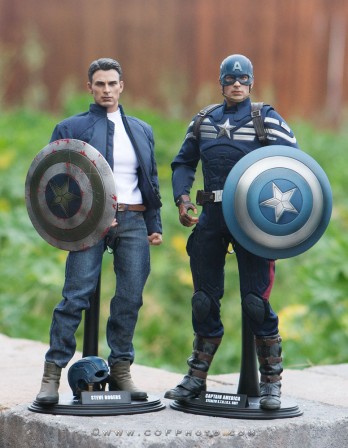 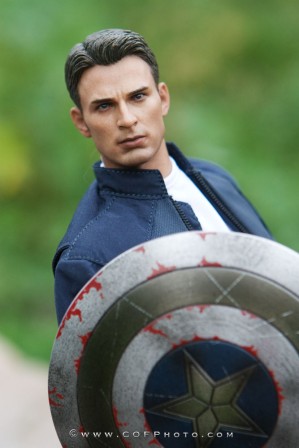 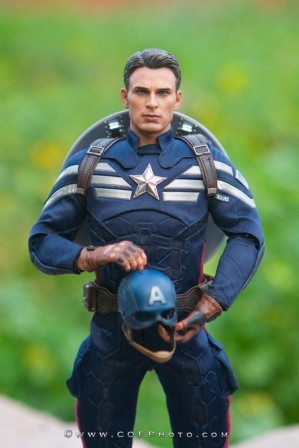 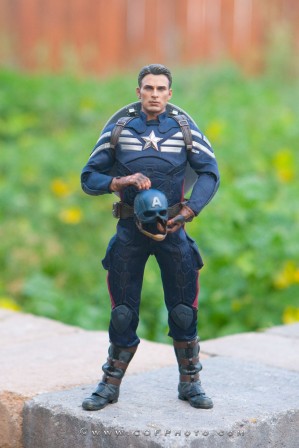 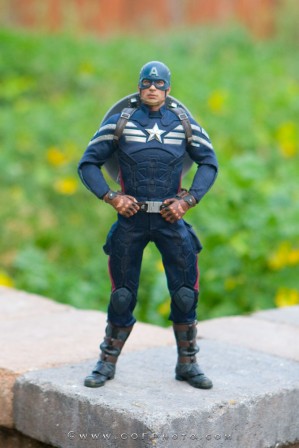 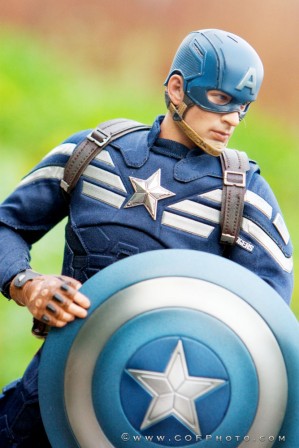 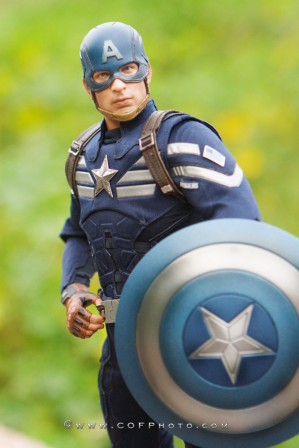 Since my son Gavin dresses as Bucky, he was immediately drawn to the Winter Soldier figure. Naturally his first comment was about how awesome the shiny robotic arm looked, since it’s the character’s most recognizable feature. He immediately went to checking out all of the weapons (and there are a LOT) tucked away literally on every side of the figure, and the two interchangeable head sculpts (masked and unmasked). Definitely opened up tons of posing options! 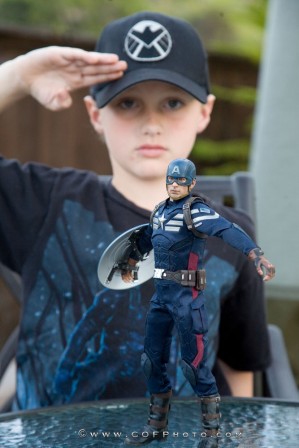 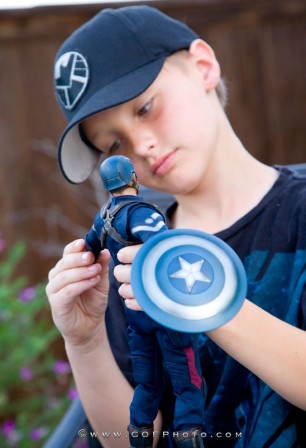 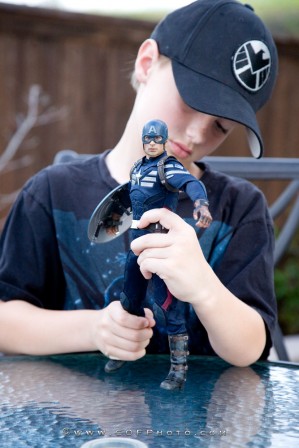 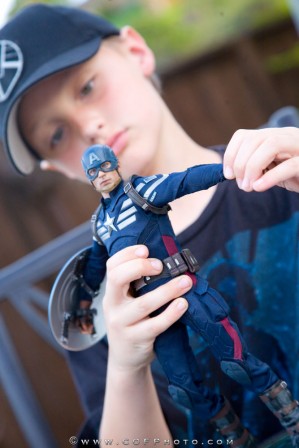 The Captain America S.T.R.I.K.E. figure is probably the most detailed Captain America figure we’ve seen to date. Gavin kept marveling (pun intended) over all of the intricate details of the belt, pouches, the chest harness, gloved hands, and of course the beautiful metal shield. He was really blown away by the feel and the weight of the shield, unlike any regular plastic toy, for sure. 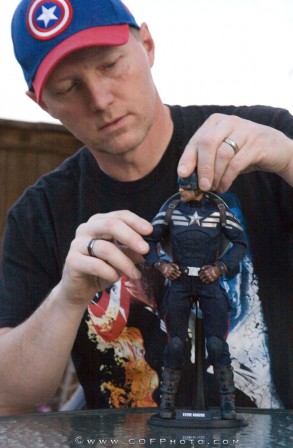 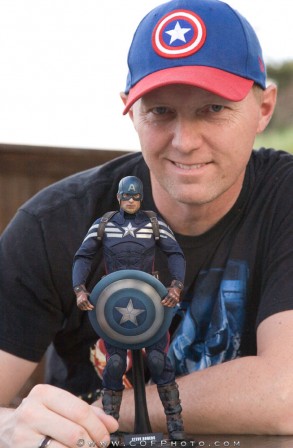 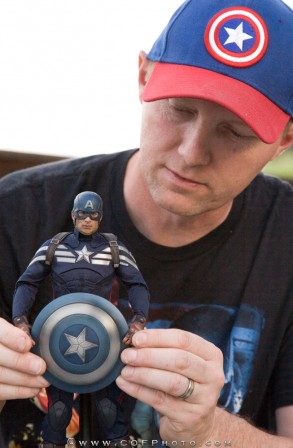 Gavin and I agreed that the Steve Rogers figure is Hot Toys’ best representation of actor Chris Evans – and we would know because we have them all! While all of the other Hot Toy Cap figures are great representations of costumed Cap from the movies, this is a fantastic ‘civilian Steve’ that looks great with the rest of our figures. 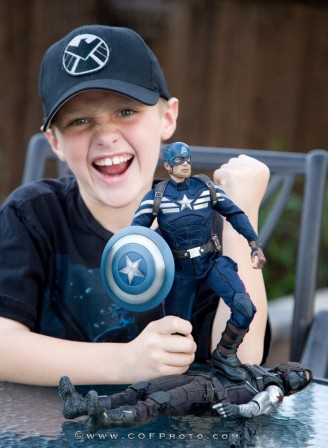 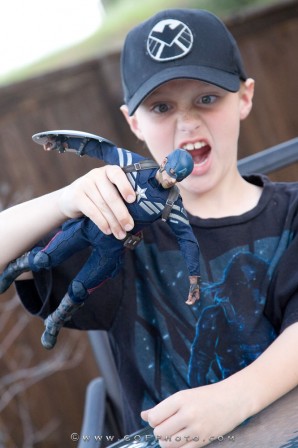 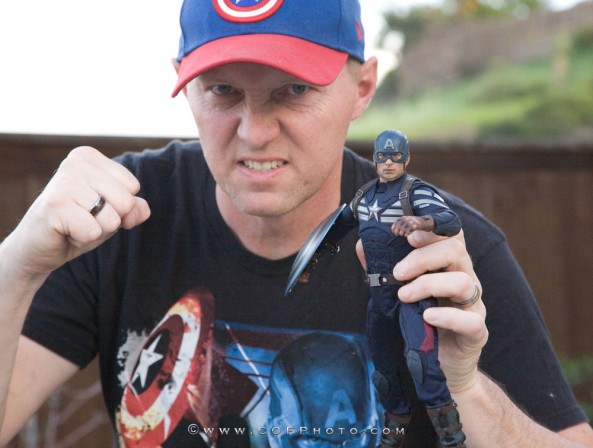 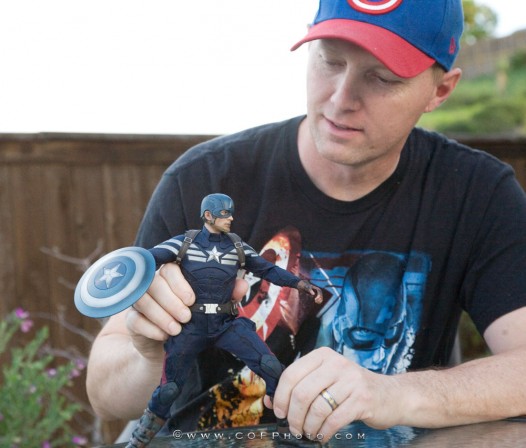 Once we had our initial look over the three figures, the action poses began. The causeway battle between Cap and Bucky in the movie was so well choreographed and so memorable, it was a lot of fun for us to recreate. 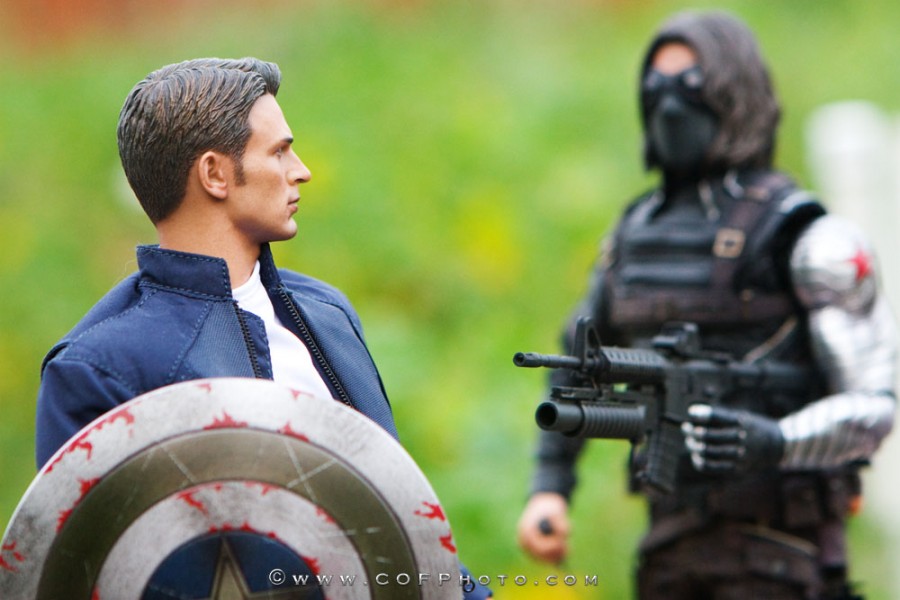 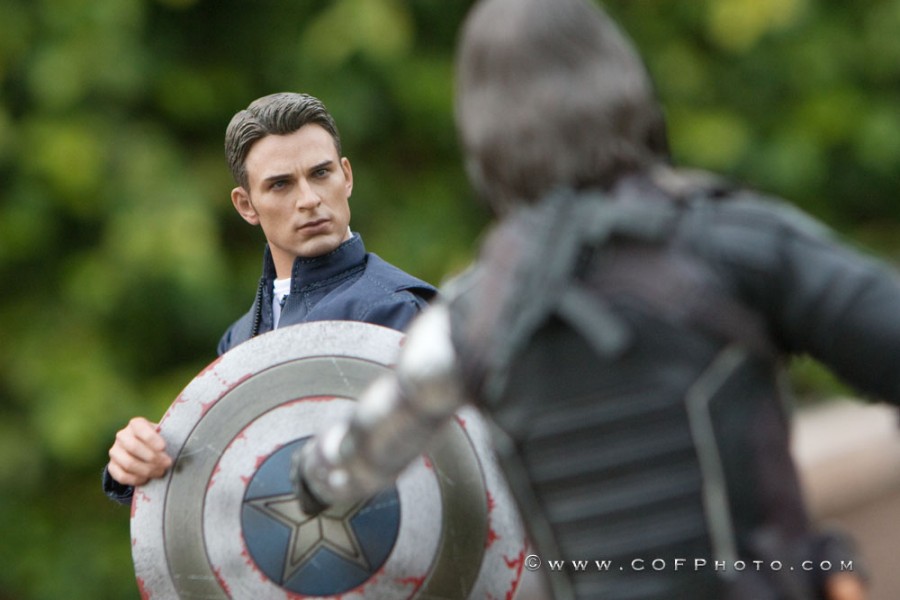 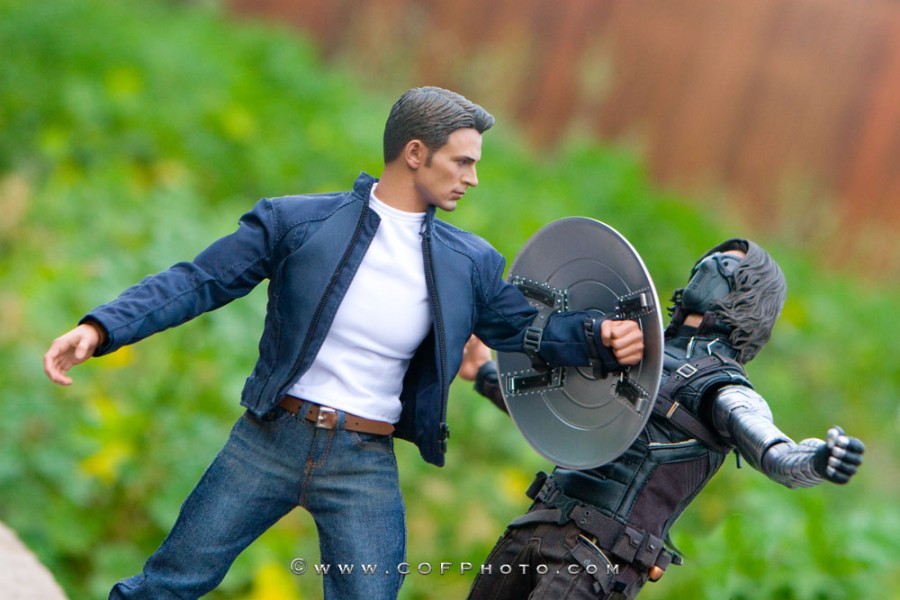 Gavin of course liked the iconic pose of Winter Soldier punching the shield. But our favorite poses of the day were probably the ‘Steve jumping, about to bash Bucky with his shield’ pose, which was immediately followed by both Steve and Cap standing over a defeated Bucky, high-fiving each other. We laughed hysterically at how it looked. 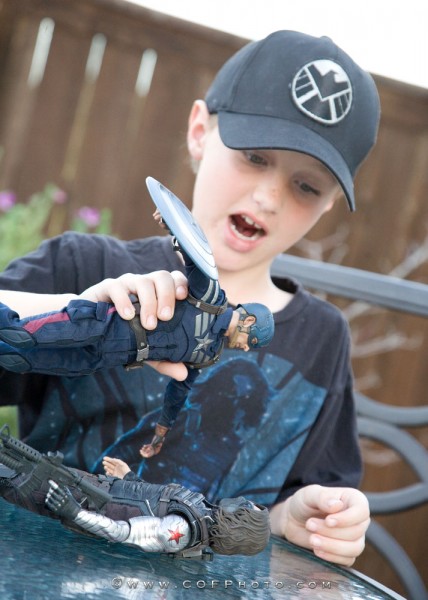 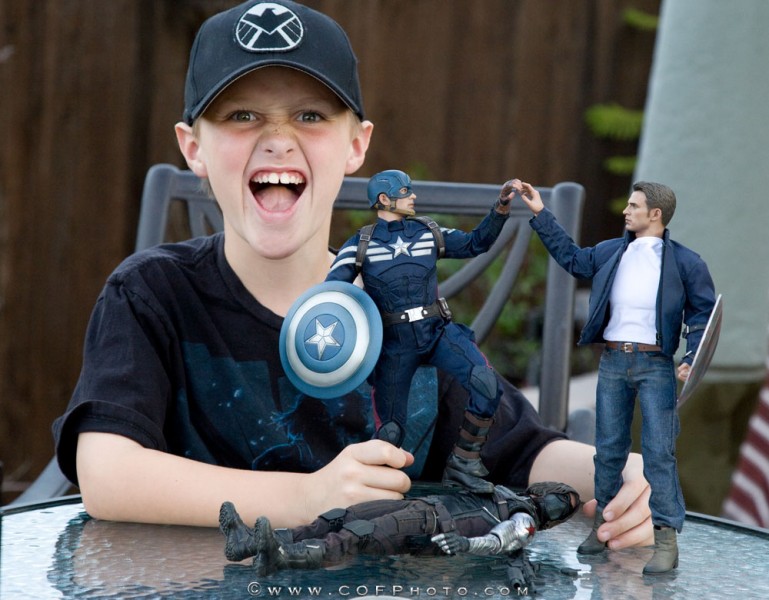 Our action-packed afternoon went on for some time, posing the figures together in as many scenarios as we could think of. When we’d finally worn each other out “fighting,” we agreed that it was time to go inside and watch Captain America: The Winter Soldier again. Seriously one of the best Marvel movies ever. 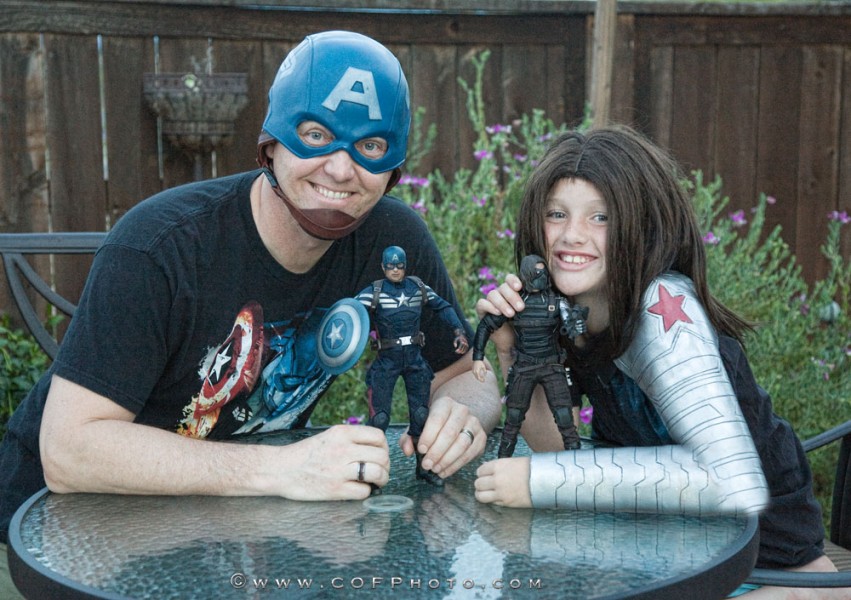