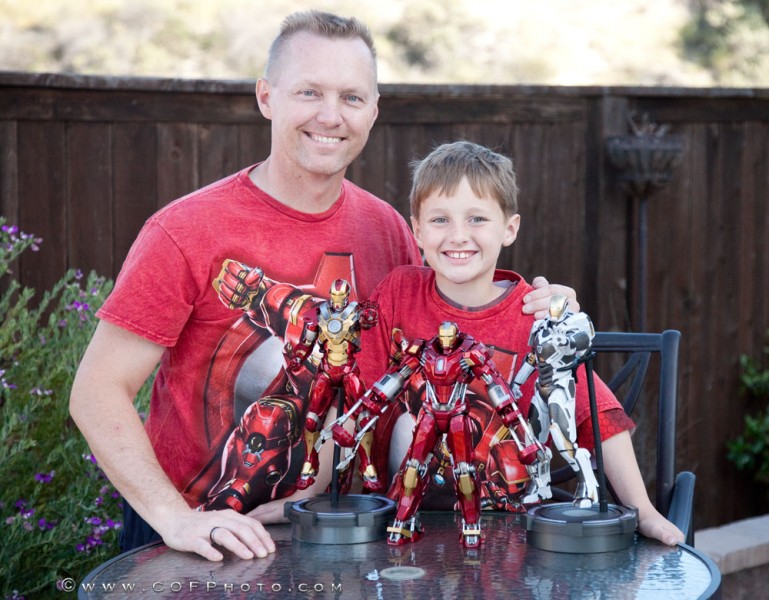 Iron Man, Iron Man, Iron Man…..you can never have too much Iron Man! I’m not sure exactly how many Hot Toys Iron Man figures have been made over the years but every single one of them is amazing, and Hot Toys keeps getting better at making them.

In this review, Gavin and I will take a look at the Hot Toys Heartbreaker, Red Snapper and Starboost figures. While all three figures are beautiful, we were both drawn to Heartbreaker because we both felt that he looks mean and nasty. Even though he was only in the movie for a few seconds, he definitely had a swagger to him when he landed and started walking. 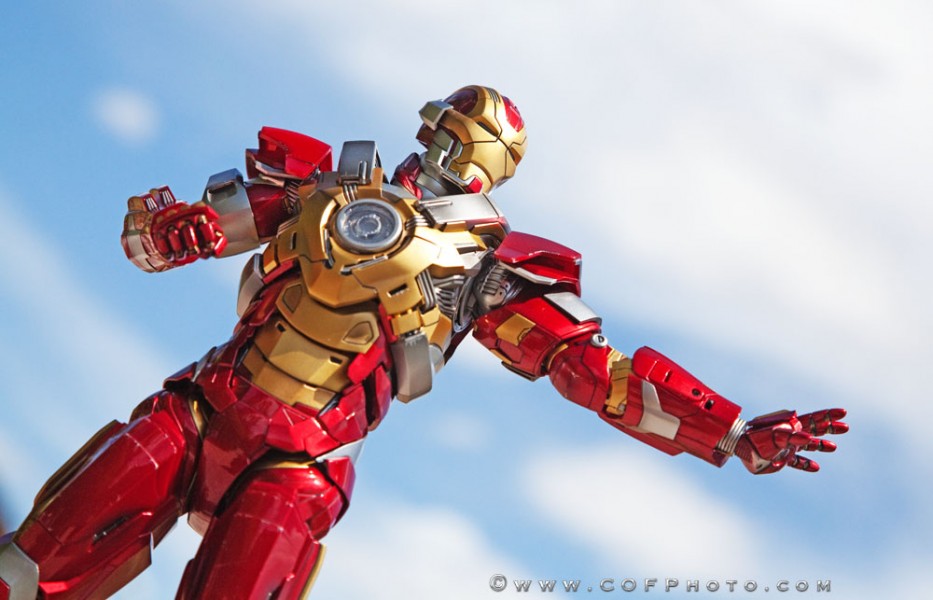 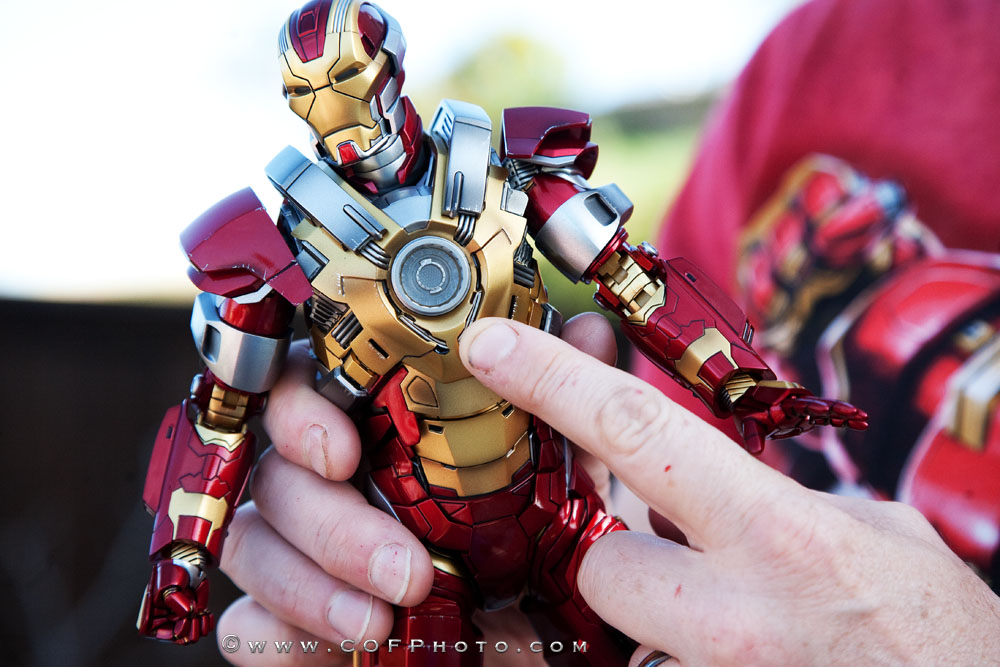 Heartbreaker was my favorite “not featured” armor from Iron Man 3. Though the color scheme is similar to a lot of the past suits, this one is noticeably larger and…awesomer. We agreed that as this suit is an ‘artillery suit’ it would need additional power, hence the larger than usual arc reactor, and extra bulk to fire larger weaponry. On the chest we also noticed there appear to be small coils tucked back into the armor. My guess was they were some sort of extra cooling system that the larger arc reactor needed.

Something that I’d never noticed until I had the figure in my hand were the addition of the pieces on the arms. We couldn’t figure out what their function might be, but they really add to the look and the bulkiness of the figure. Another detail that caught Gavin’s attention were the gold lines on the back of the hands. We’re not sure if they are functional or cosmetic, but they do look cool!

This suit really has attitude all over it. Probably my favorite features were the head and face. Gavin liked the additional silver strips around the sides of the helmet, and on the chest where they make a large ‘X.’ Asked to describe it in one world, Gavin said “rad”. 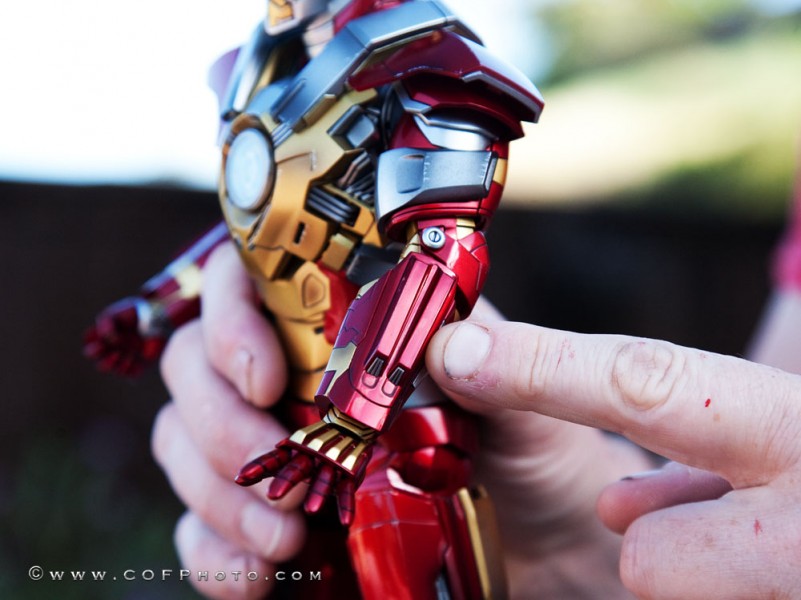 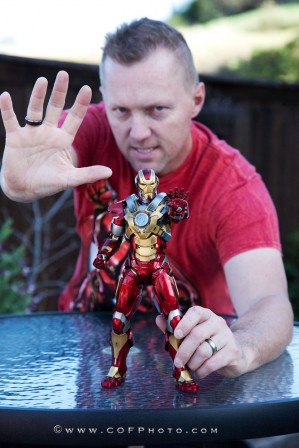 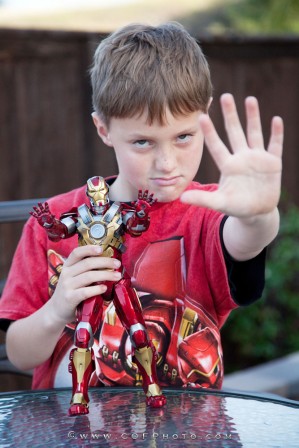 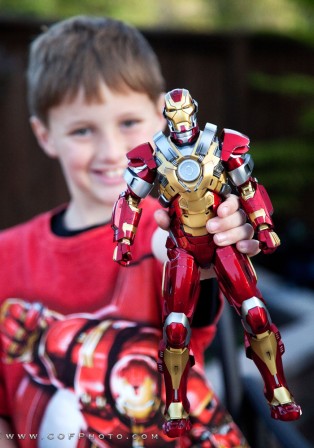 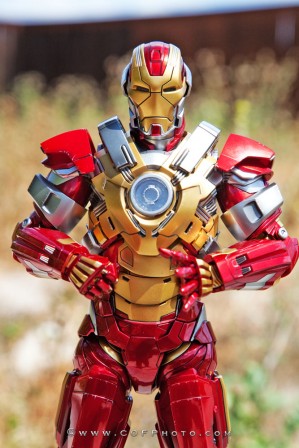 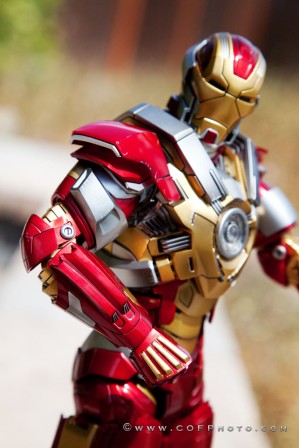 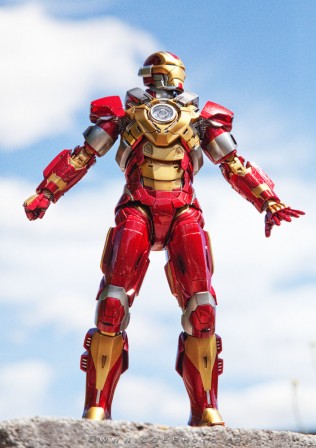 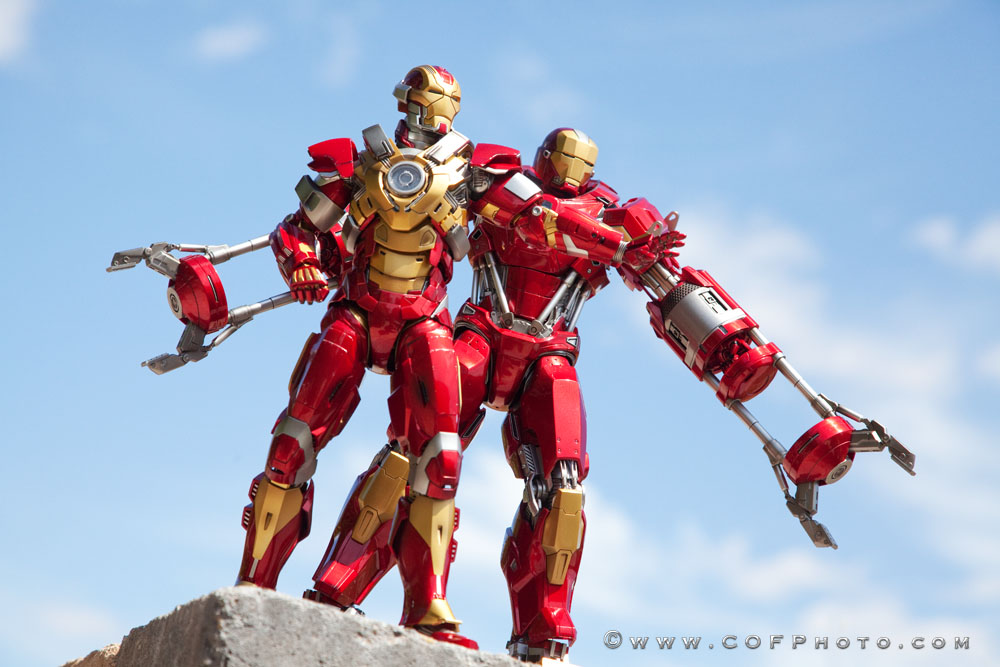 Fun Fact: Did you ever notice that in Iron Man 3, Red Snapper (known as the Disaster Rescue Suit) is the armor that crashes, blows up and traps Pepper? I always thought that was pretty funny, the rescue suit trapping her…

Anyway, in my opinion, the Red Snapper is a very underrated figure and a great deal for the price. Talk about unique, there was nothing like Red Snapper when it came out. Of course, the Peacemaker suit followed soon after, and together with their size, the two of them would make excellent “bookends” in any Iron Man collection. 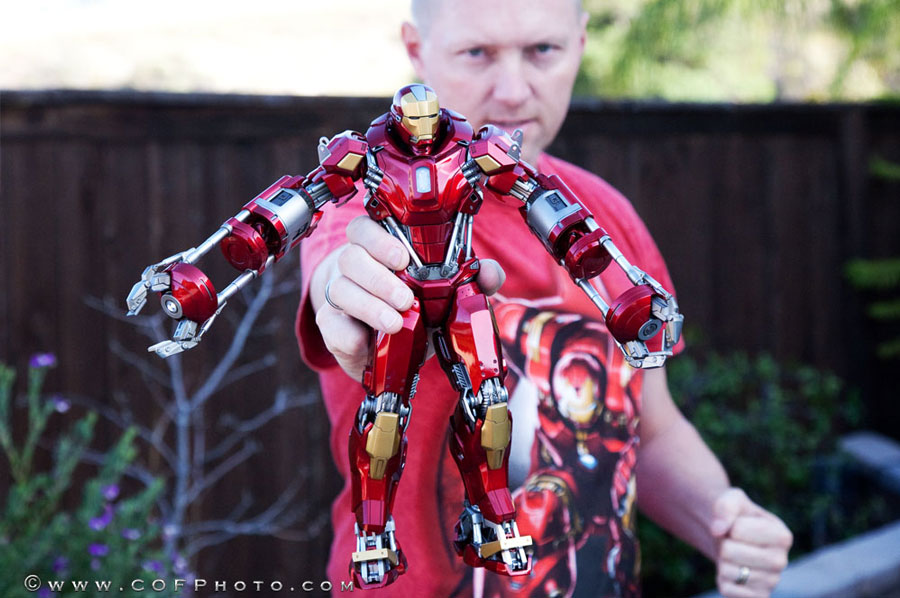 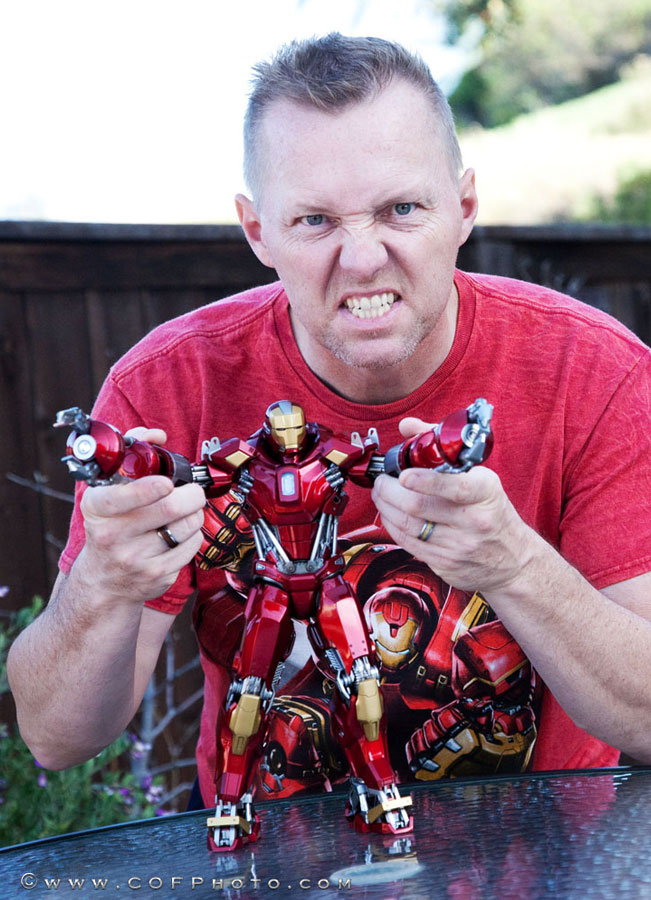 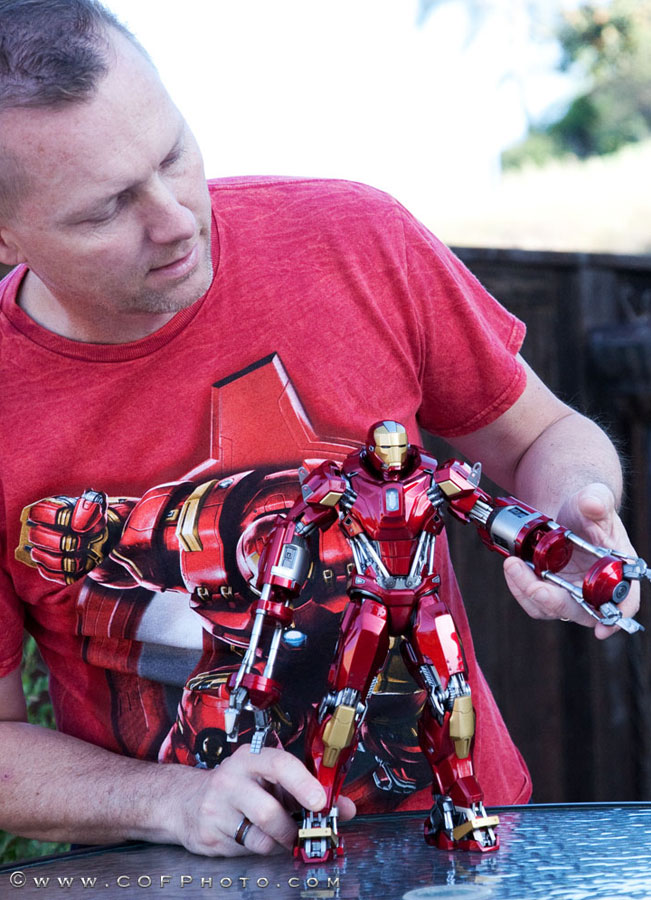 Obviously the main attraction on Red Snapper are the arms. Intended to be a “disaster rescue suit” we had to imagine that the large claws were made to move, lift and tear into things to rescue people buried below.

The lobster claws fully open and close and the arms are well articulated. And until I had a chance to inspect him more closely, I hadn’t noticed that you can actually see Iron Man’s hands inside the Red Snapper arms. Pretty cool! 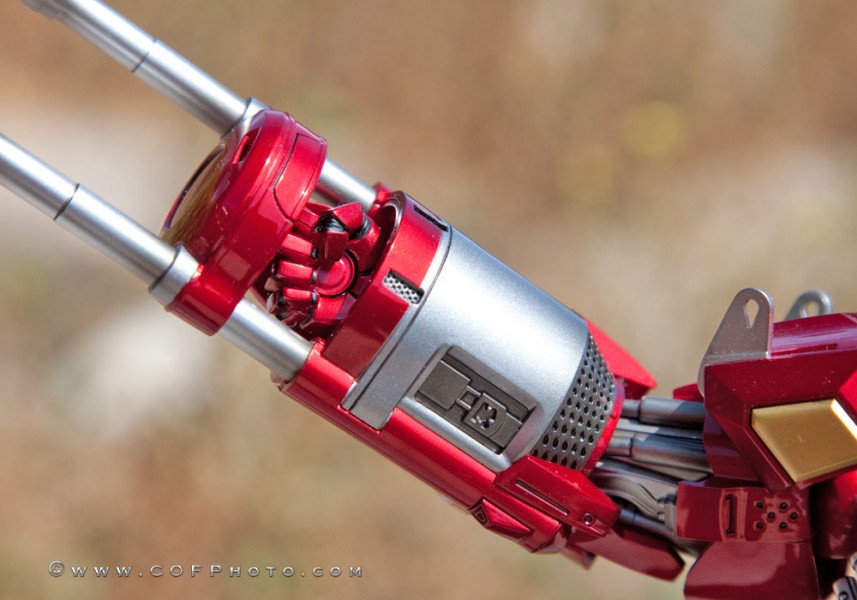 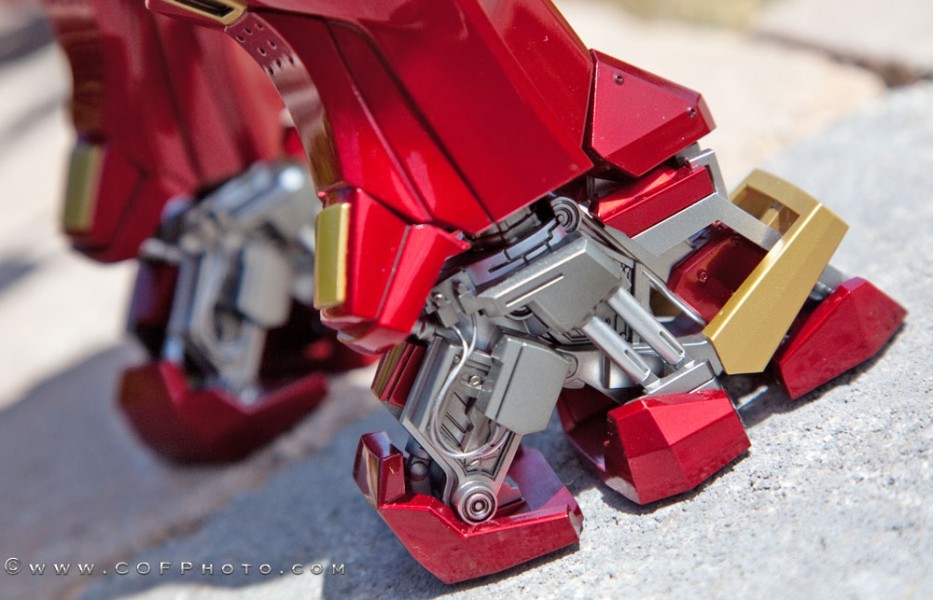 While Red Snapper is known for his massive arms, the feet are big and they are awesome!! Look at the size of those things. He’s a big figure, but believe me he’s not falling over with these size 15 sneakers.

Despite being part of Hot Toys’ newer ‘Power Pose’ collection, which began with the Iron Man Mark 42 suit and is known for more limited articulation, the Red Snapper figure is quite poseable. The head, arms, and legs all move, and you’ll have no problem finding a variety of cool poses with this figure. 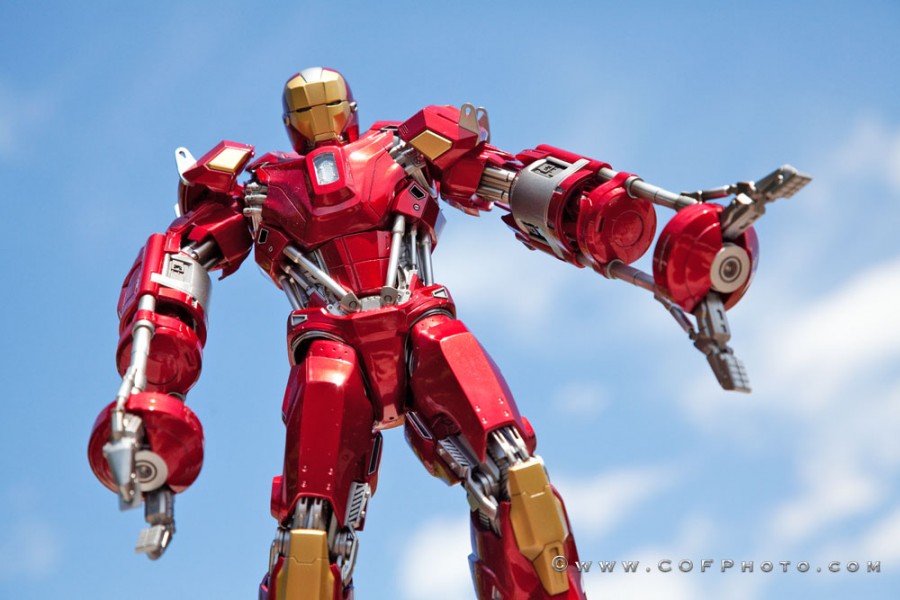 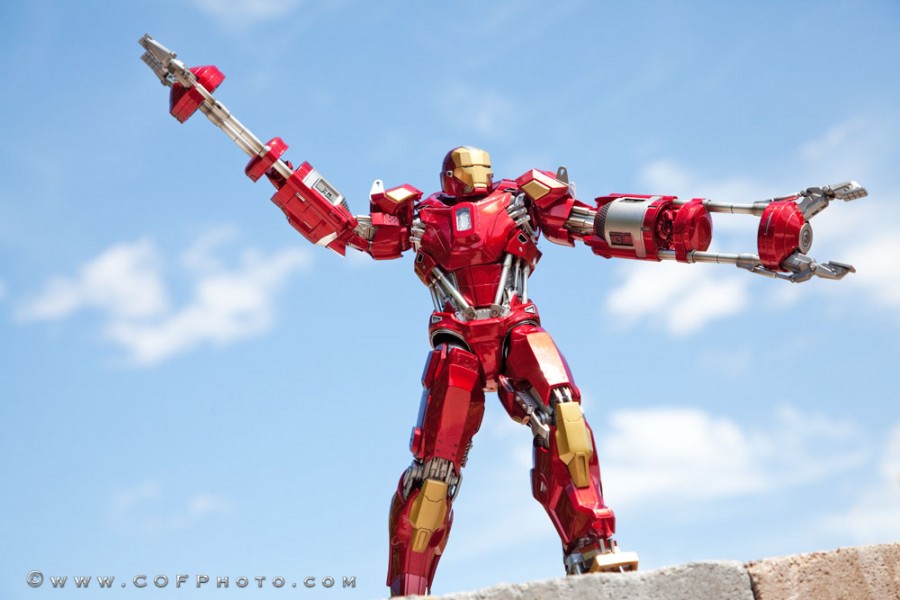 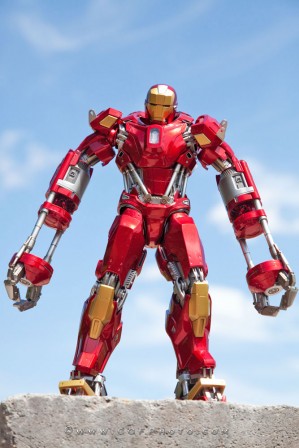 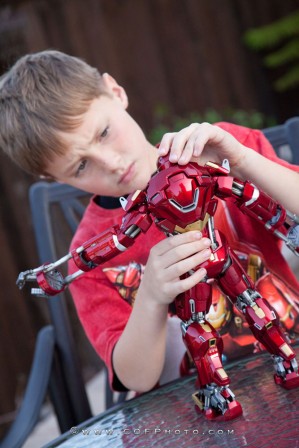 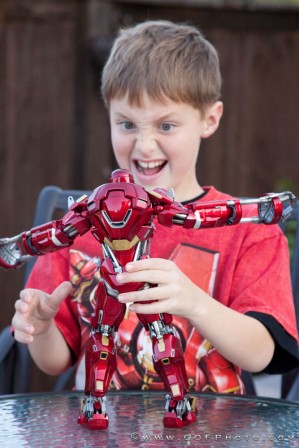 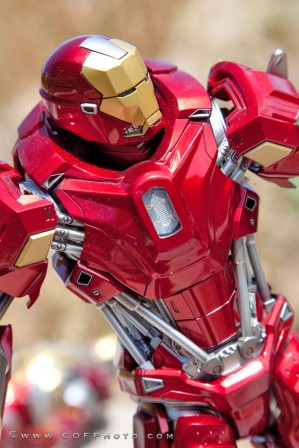 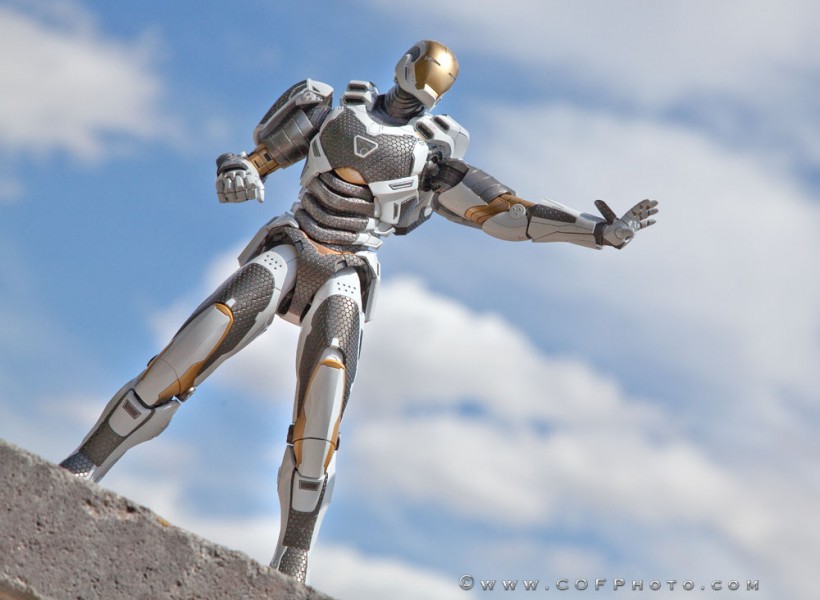 The color scheme is just beautiful in person as it looks online. Gavin felt the dark grey color with the hexagonal pattern made the figure look “awesome and fierce.” Because the white and grey are neutral colors, I felt that it really made the gold ‘pop’ on of the figure. 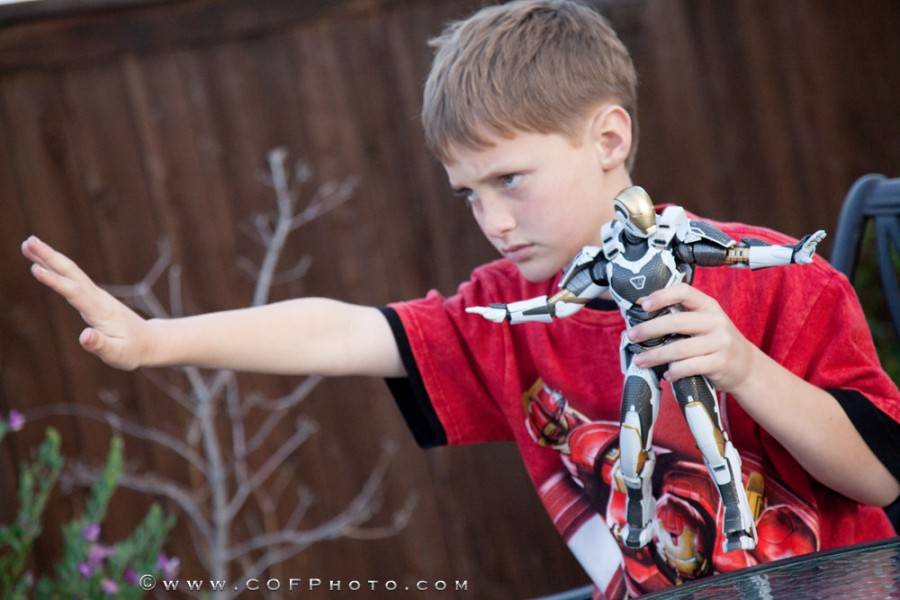 Although the Starboost suit wasn’t featured in Iron Man 3, Gavin and I both commented on how ridiculously cool it would look flying through space in the MCU.

Flying through the Earth’s atmosphere and into space requires extra power, and one of the features that really grabbed Gavin’s attention was the addition of the large jet pack on the back and shoulders. It adds some nice bulk to the slim, typical Iron Man suit.

We also noticed that the flight-ready Starboost has is an abundance of articulated flaps – on the wrists, the thighs, the boots. Gavin looked the whole figure over and was surprised how he kept finding them.

Lastly, it also comes with two removable face plates, a pretty cool addition as well. A very versatile and unique armor, Starboost is a must have for any Iron Man collector. 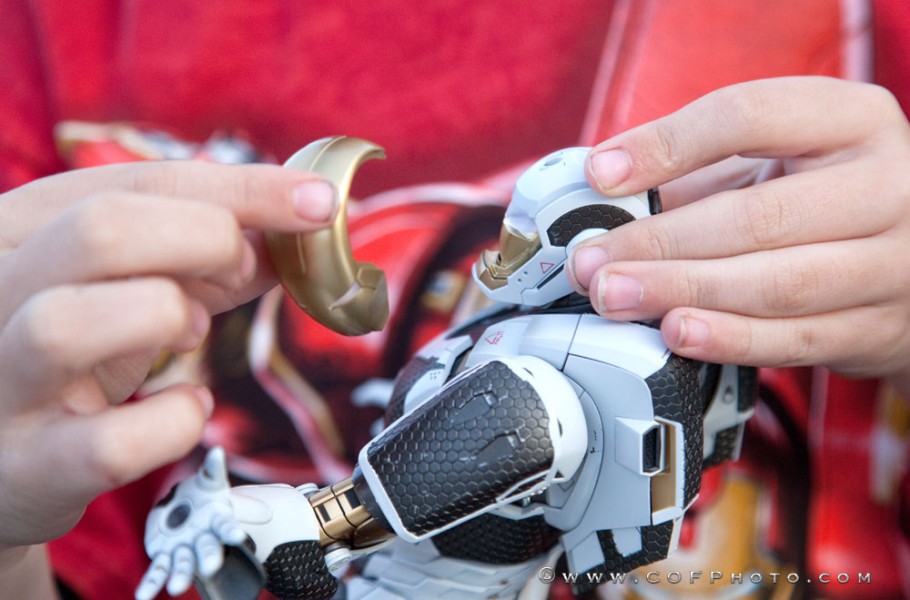 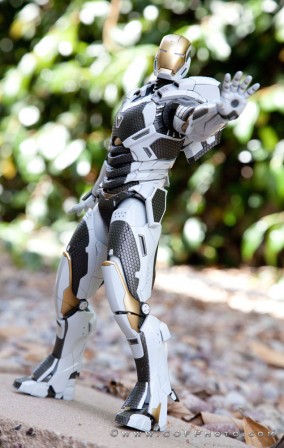 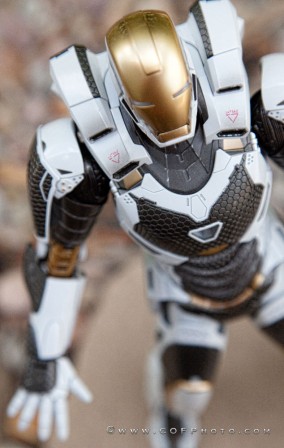 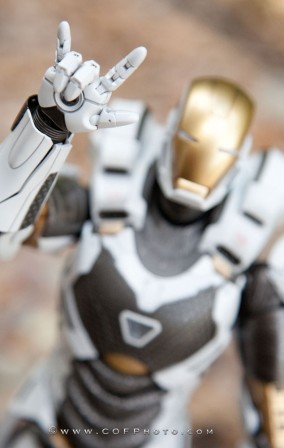 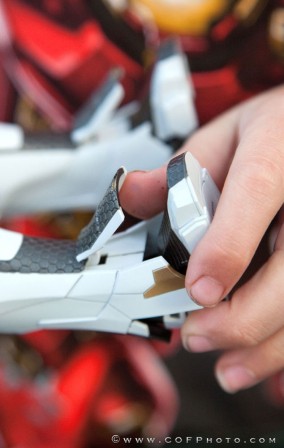 Everyone has their favorite among the many diverse Iron Man suits. Of these three my favorite was Red Snapper. It towers over all of the standard Iron Man figures with its large frame and huge boots, plus unique pincher arms are just amazing in person. Gavin’s favorite was Heartbreaker because of all of the added bulk on the arms, chest and back. We agreed that if it had had more screen time in the movie it would have totally kicked butt. We also would like to see Starboost make an appearance in Infinity Wars or maybe even Guardians of the Galaxy 2. Fingers crossed!

Til next time!
Shawn and Gavin 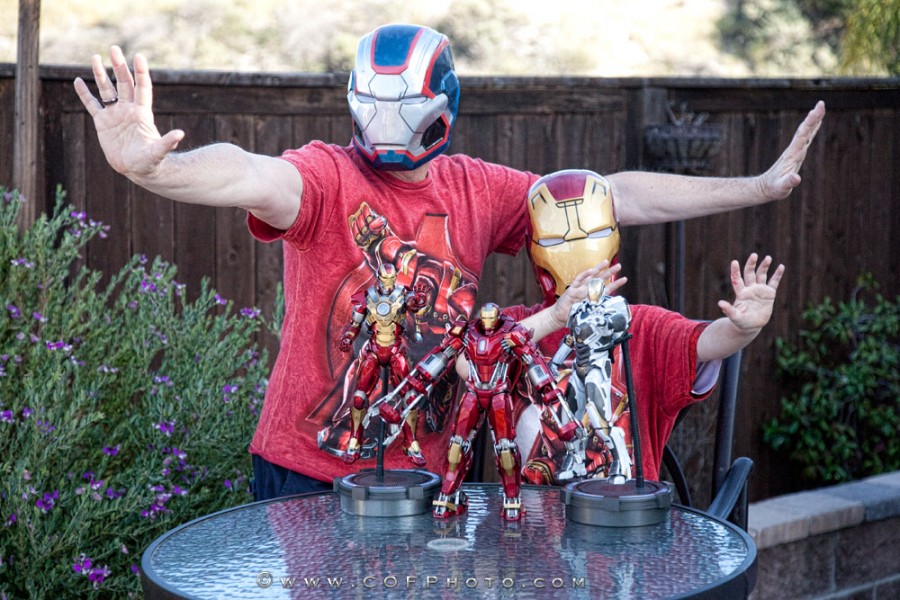