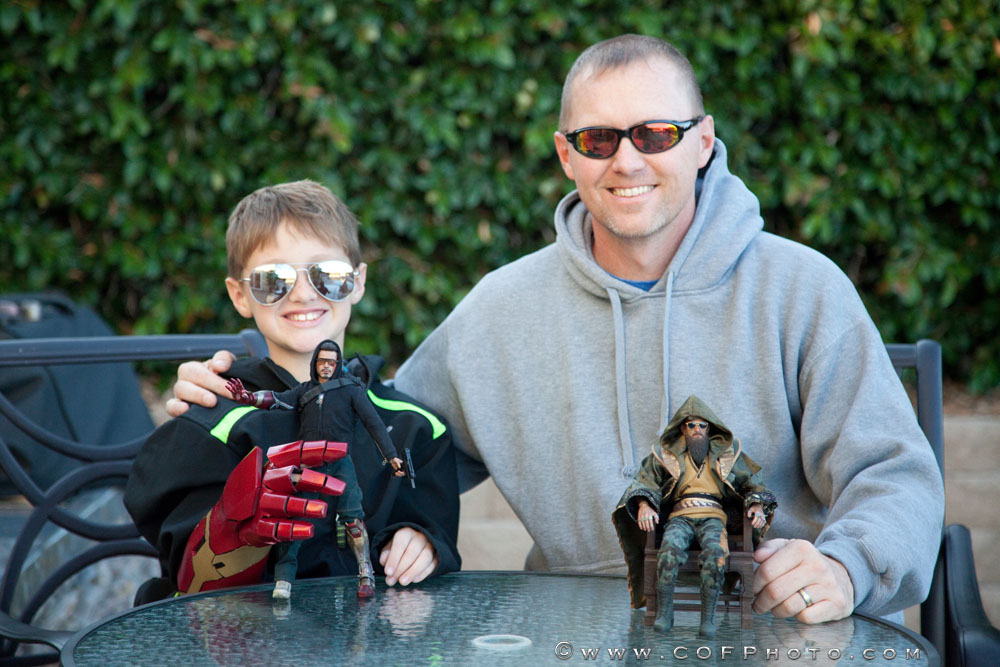 Today Gavin and I had a chance to get an up close look at two very underrated Hot Toys figures from Iron Man 3; The Mandarin and Tony Stark as ‘The Mechanic’.

Now I know what you’re thinking – the character Ben Kingsley played wasn’t really The Mandarin, he was just an actor and if you absolutely hated that part of the movie, I totally get it. Personally it was a complete shock and I totally dug it. I never saw it coming, you might say.

If you hated “the twist” so much that you’d never even consider buying this figure, then you probably wouldn’t have even clicked on this review in the first place. So if you’re reading this then we’re going to assume that you’ve at least considered it.

I’ve had this figure for some time and I love it. I love villains (and really wish Hot Toys would make more of them), and let’s face it: an Aldrich Killian figure would be totally boring, so this is the villain figure to have from Iron Man 3. 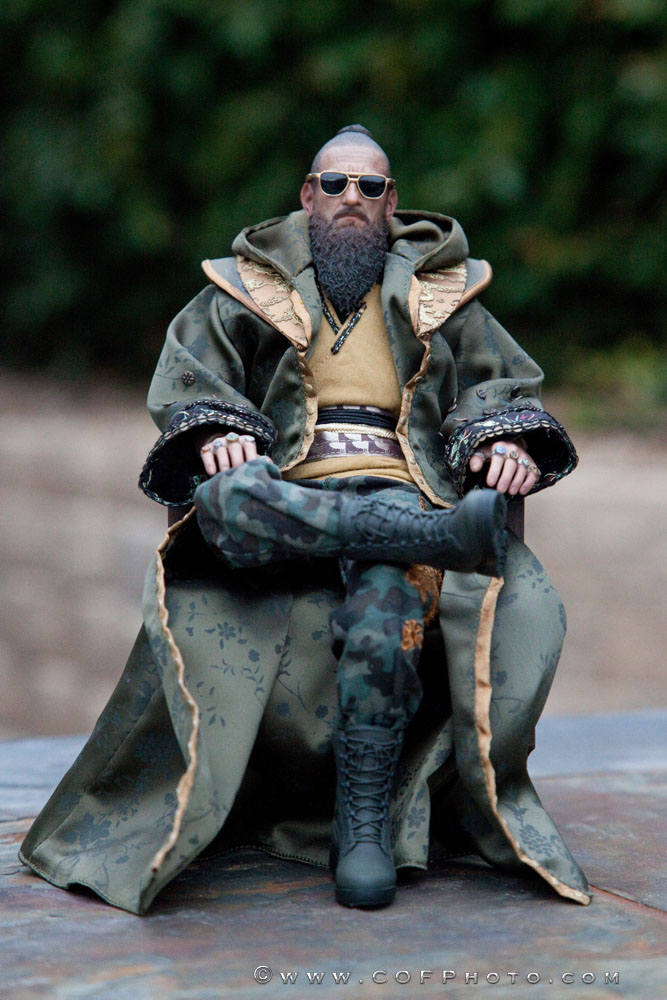 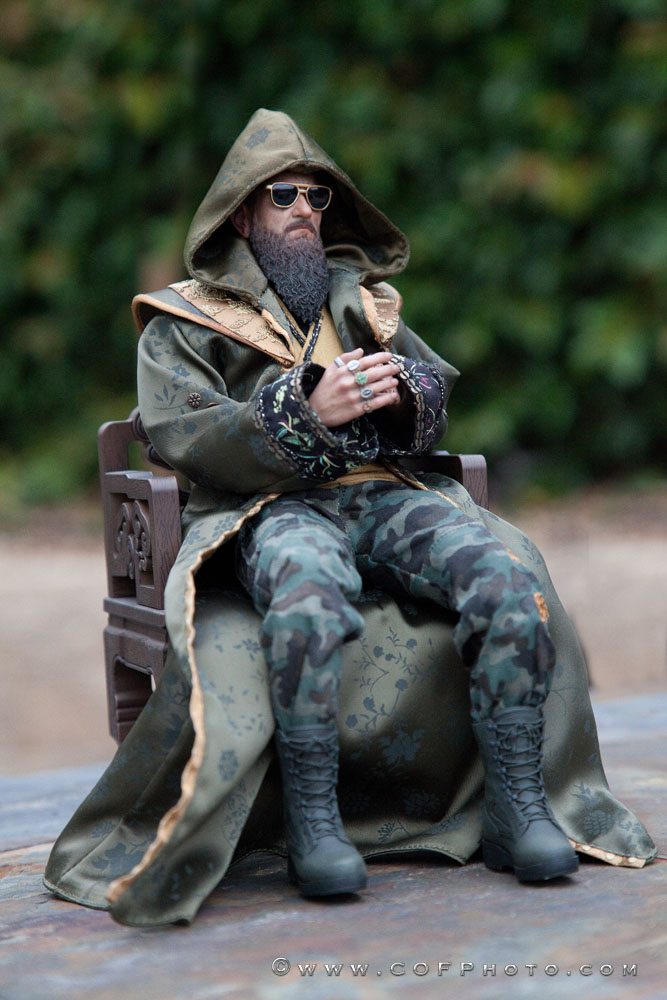 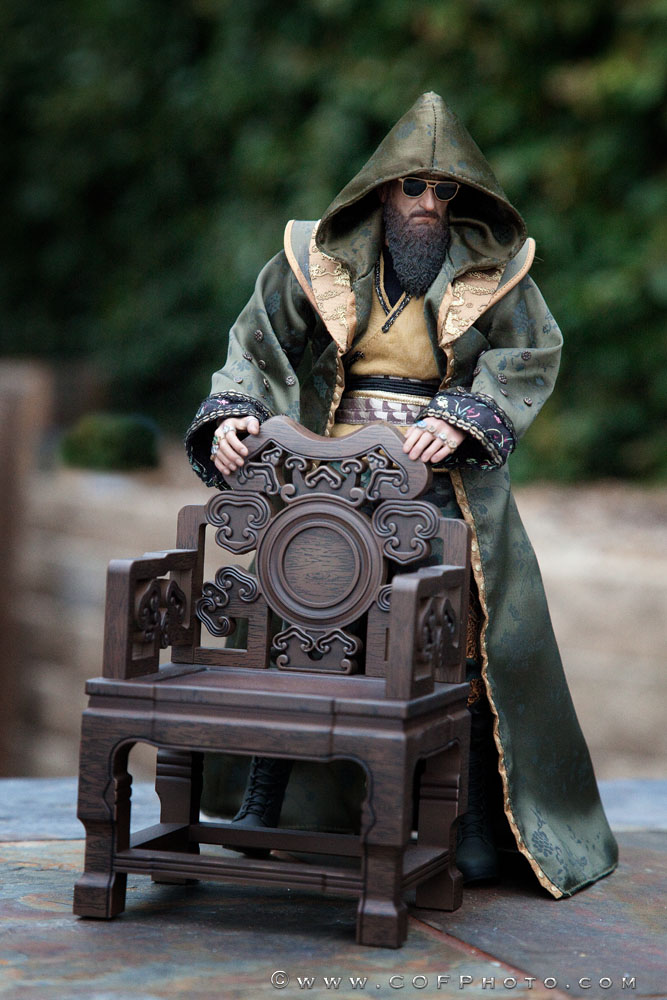 Sitting in his chair (because yes, he comes with a chair) with robes flowing, sunglasses on, and hood up The Mandarin looks totally intimidating and daunting.

The portrait sculpt is an absolute home run, easily one of the best Hot Toys has ever made (and that’s saying a lot). It looks so much like Ben Kingsley, it’s scary. Gavin couldn’t stop looking at it. 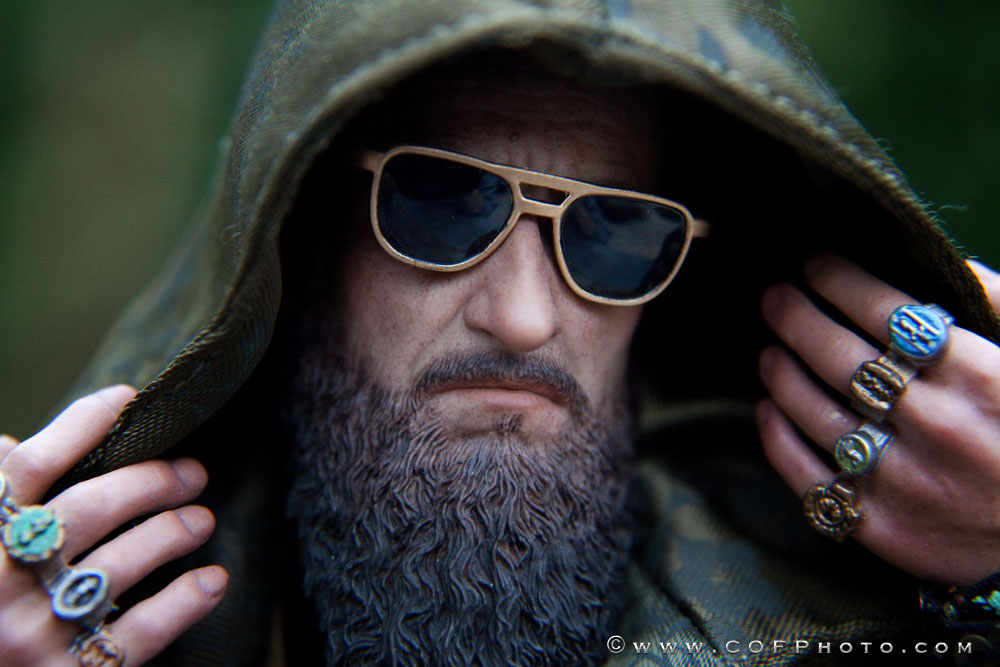 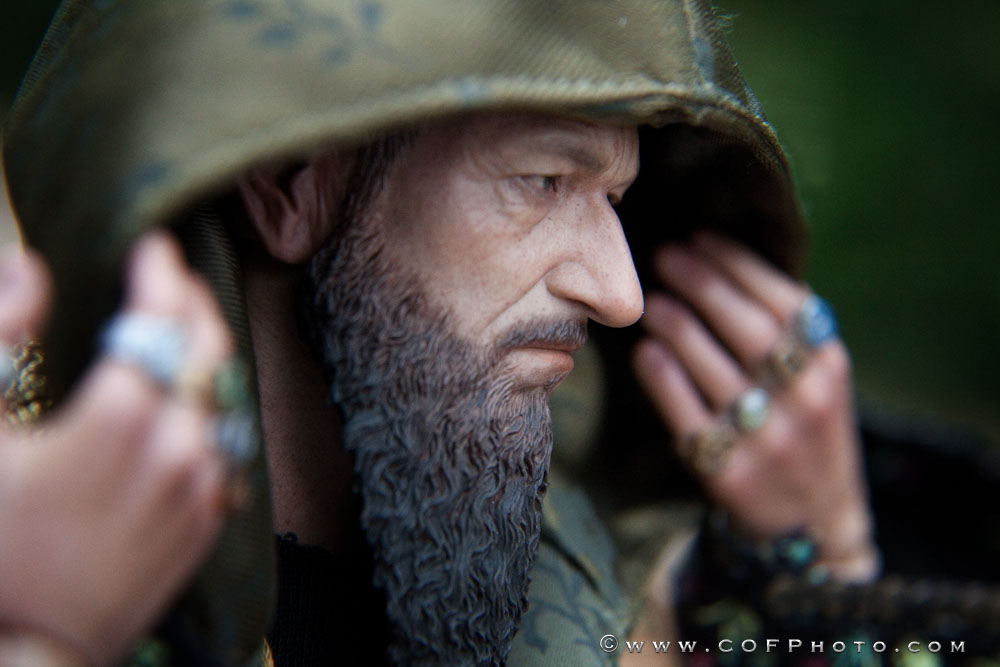 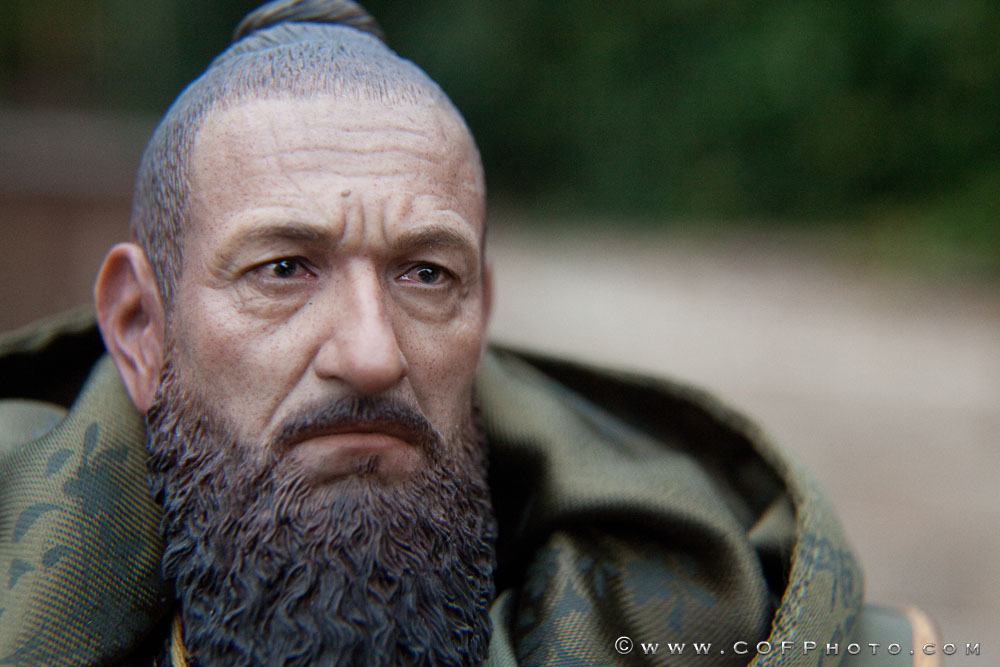 The robe is a work of art in and of itself, with many details sewn in. Gavin and I particularly liked the dragon that is sewn onto the pant leg, and the hood even has little magnets in it to hold it in place when you put it down. 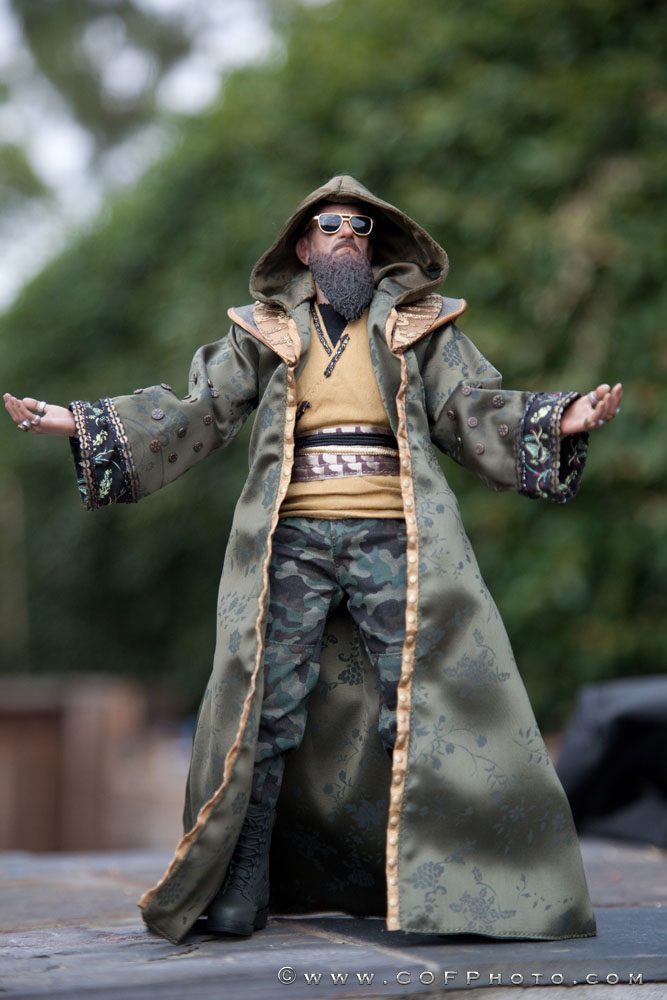 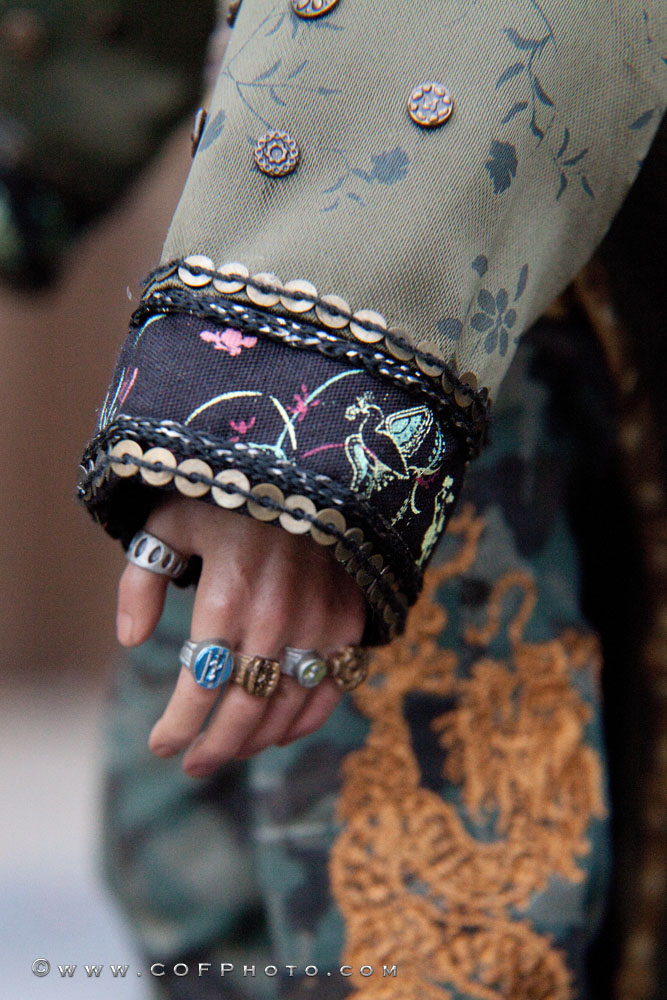 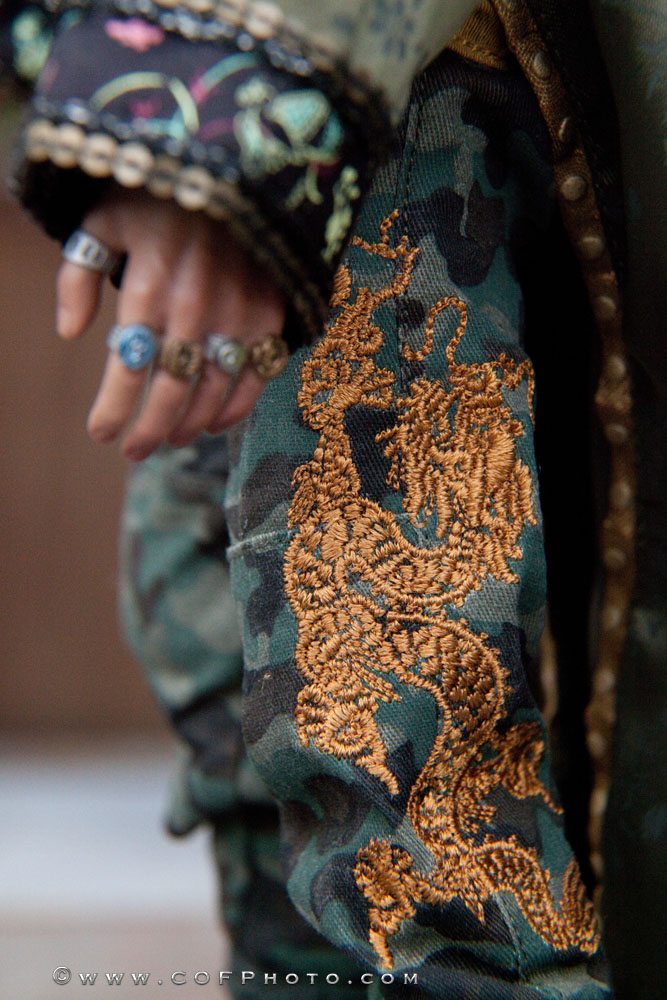 Ok did I mention he comes with the chair? And it makes all the difference – this figure looks so much cooler sitting in the chair or standing next to it than it would by itself. 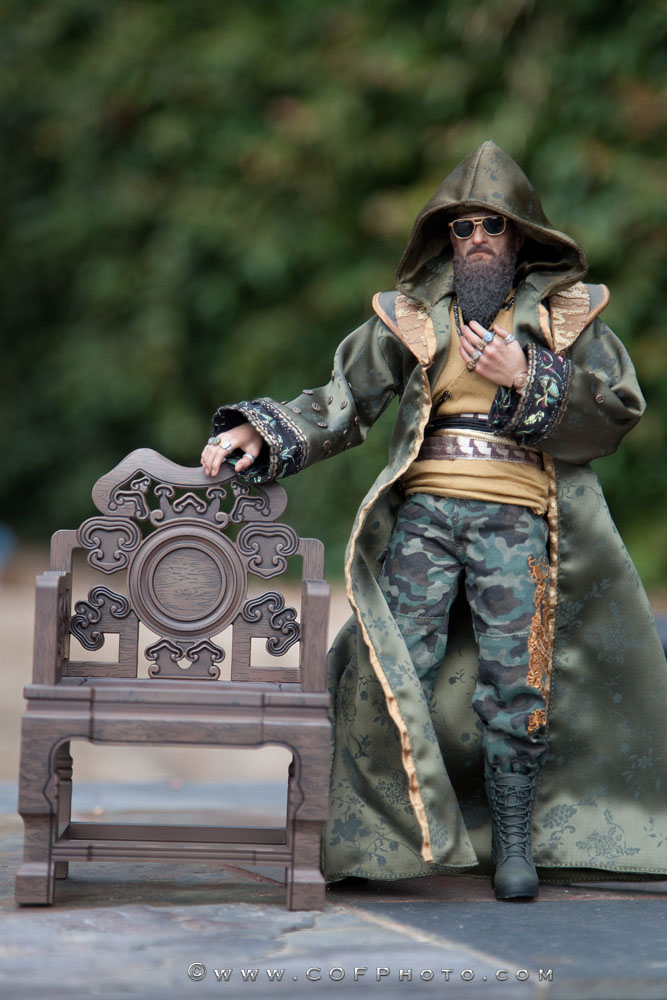 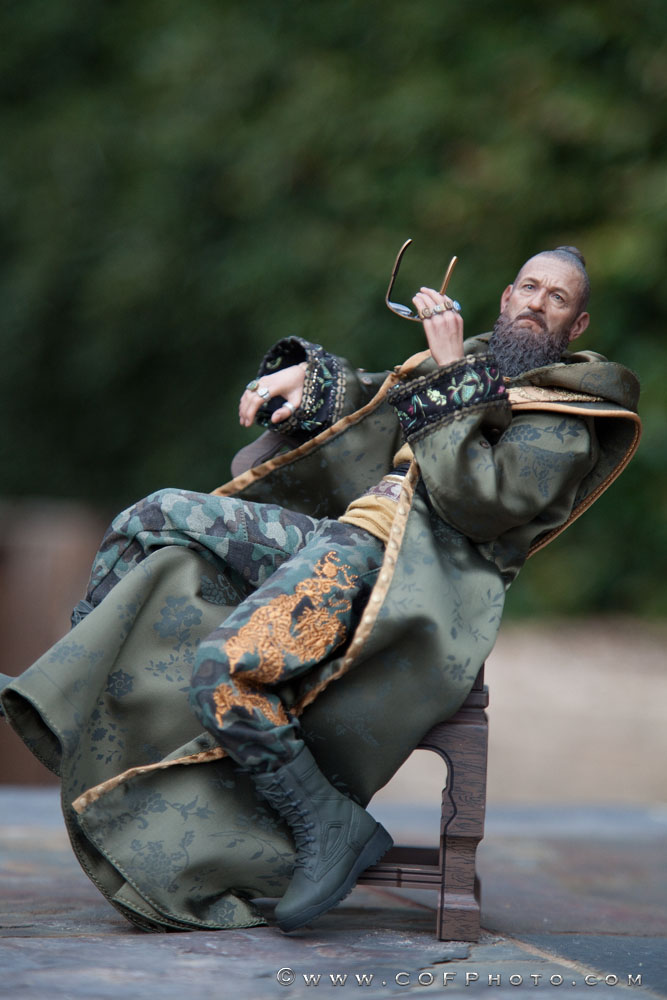 Collectors Tip
If you have this figure, do yourself a favor and look up “foo dogs” on Ebay. You can find some 3-4” tall foo dogs, and in my case I also added some 1/6 scale dog tags like in the movie and poster. I also took a damaged Iron Man helmet from another figure that I already had and together it all looks AMAZING. Check it out. 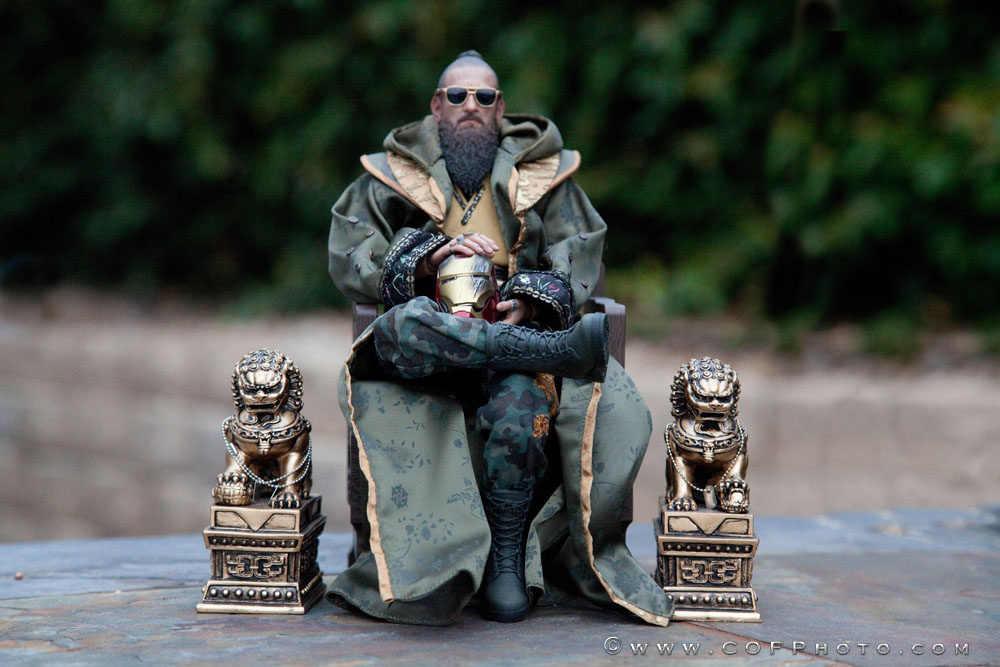 The Tony Stark Mechanic figure also has an absolute perfect head sculpt, one of the best Robert Downey Jr. portraits Hot Toys has done, and the blood looks so realistic. Gavin loved the look, commenting that Tony “really looked like he’d been through a lot.” 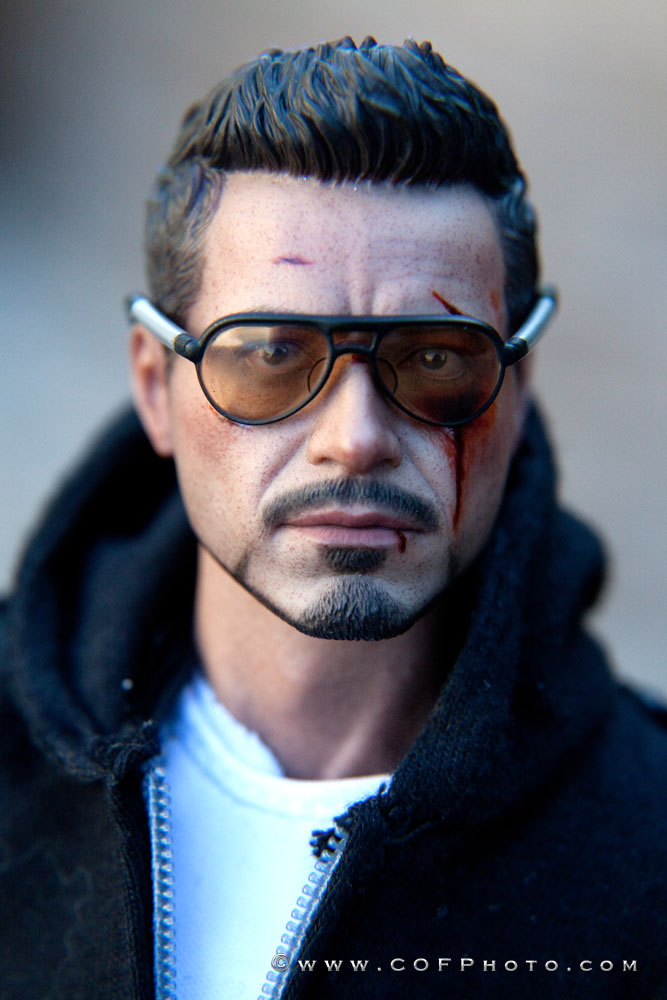 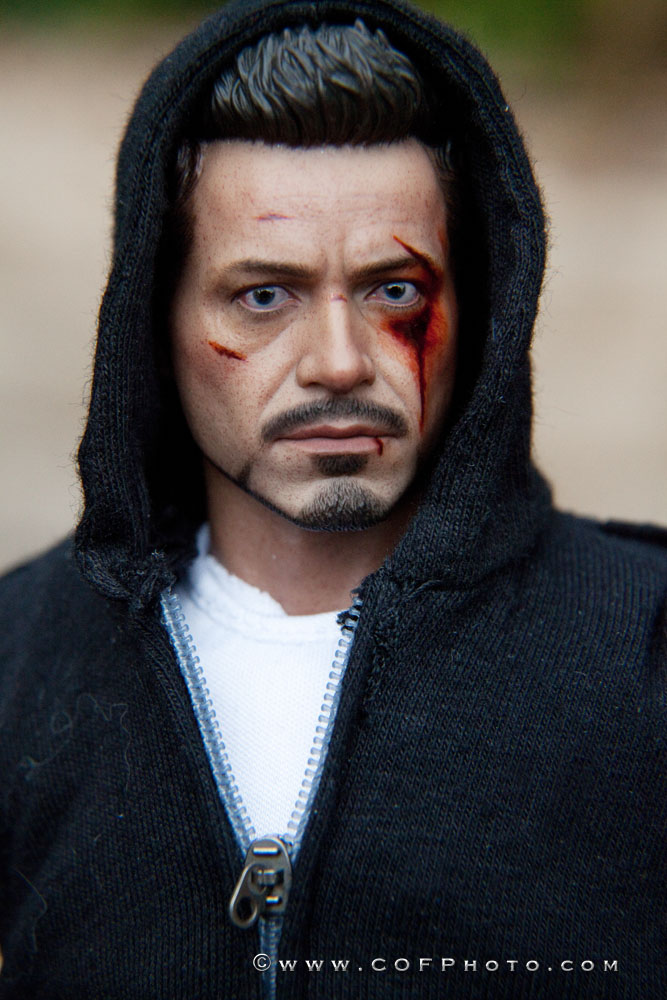 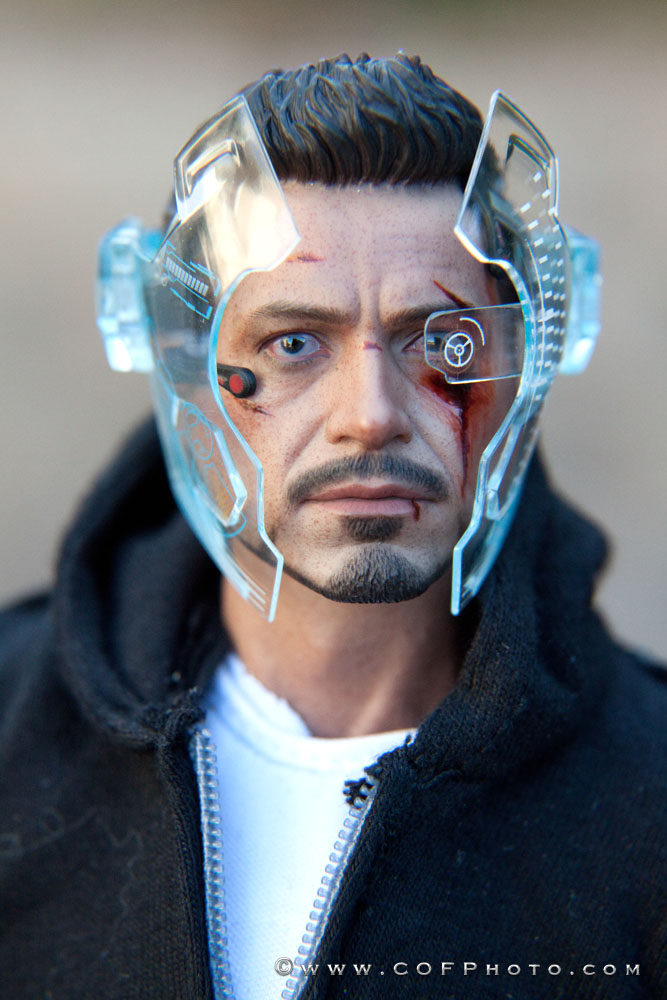 But let’s talk about all the accessories! 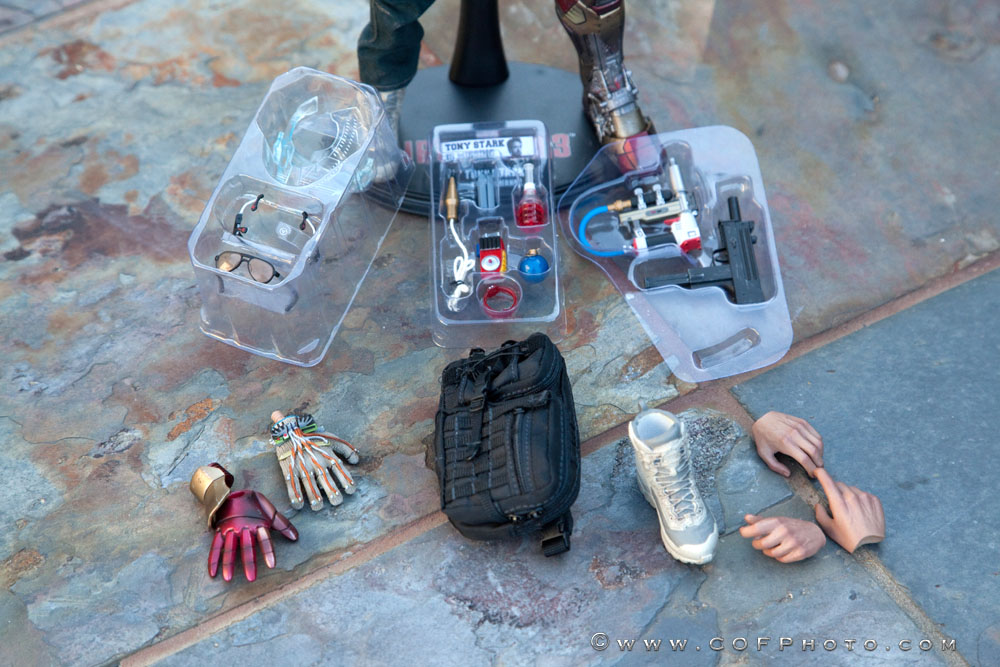 Let me just start by saying it comes with a limited edition Dora the Explorer watch! It’s really small of course but how perfect is that?

Gavin immediately went for the “taser glove” as we called it. There is also the self contained nail gun, the Christmas ornament hand grenade, the hand taser and even a “Tony Stark is Missing” headlined newspaper. He also has a big black backpack that he used in the movie to carry his home made arsenal. 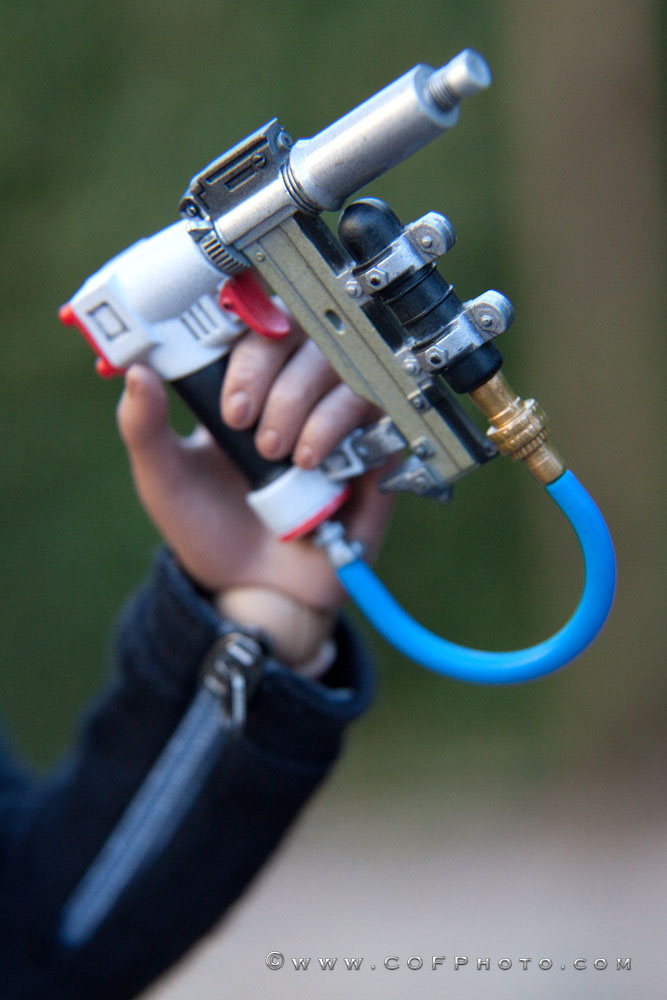 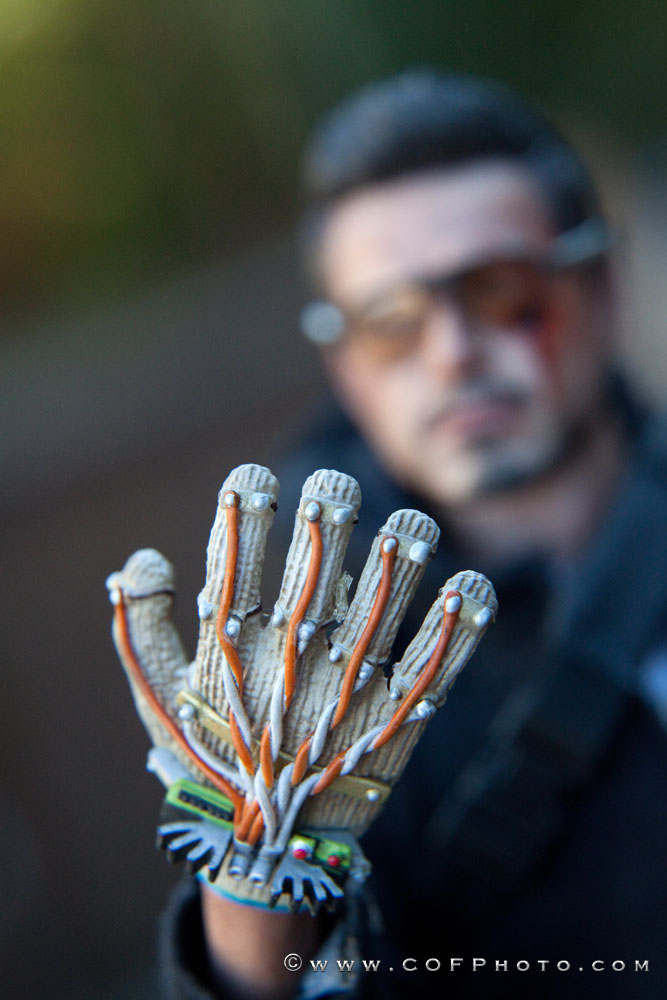 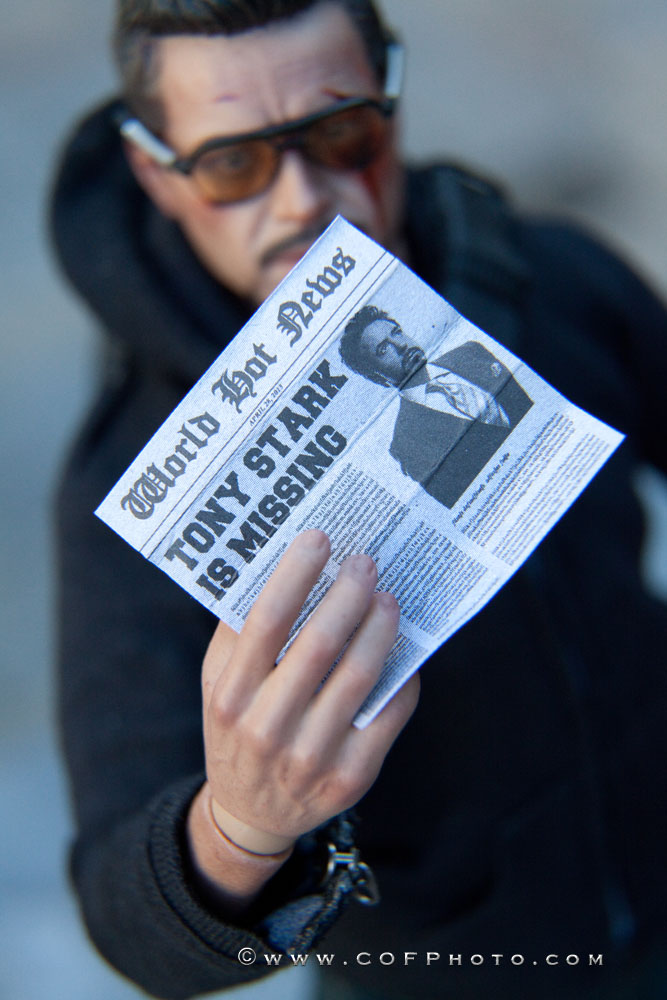 The figure also comes with the headset that Tony wore in the beginning of the movie when he was remotely controlling the Mark 42 and the holographic display that goes over the headset from when he was saving everyone from a doomed Air Force One.

I think the figure looks best with the Mark 42 glove and boot on, with the Uzi in the other hand like when he was flying around taking out baddies in the movie. So that’s the pose that we’re going with. 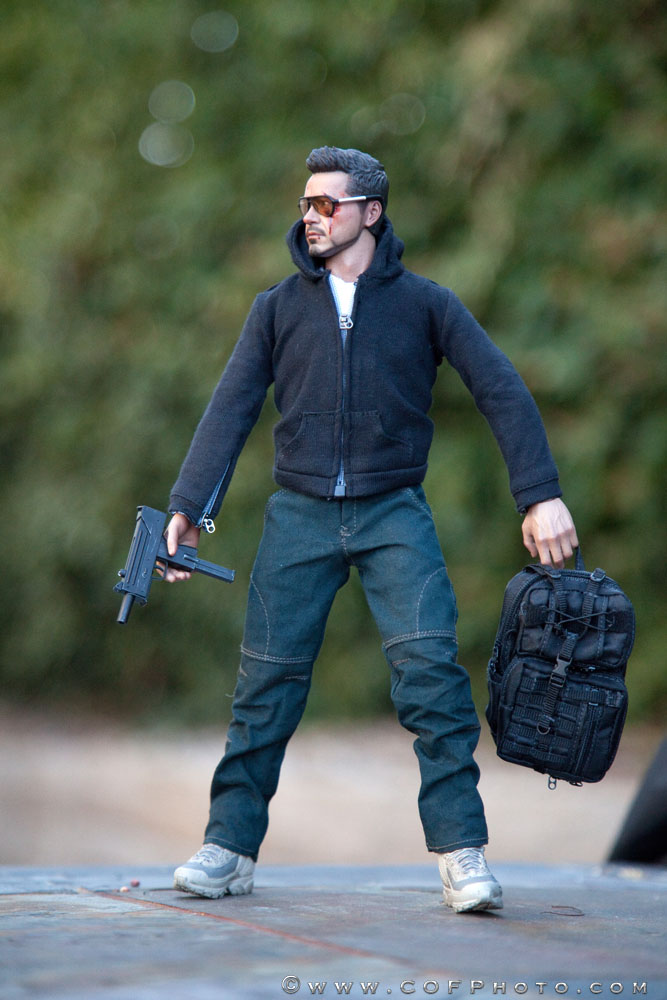 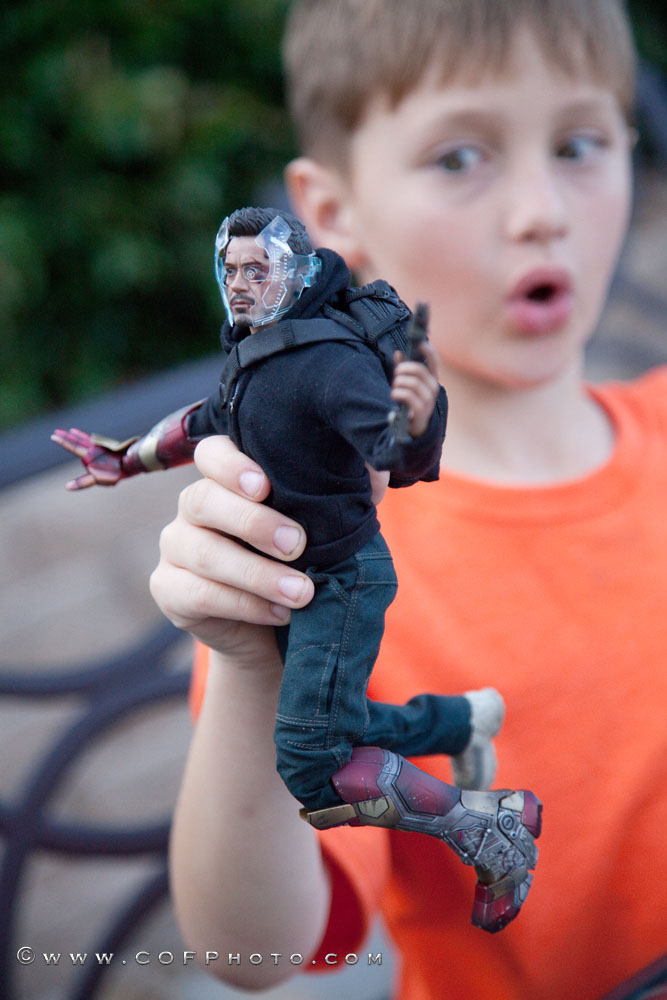 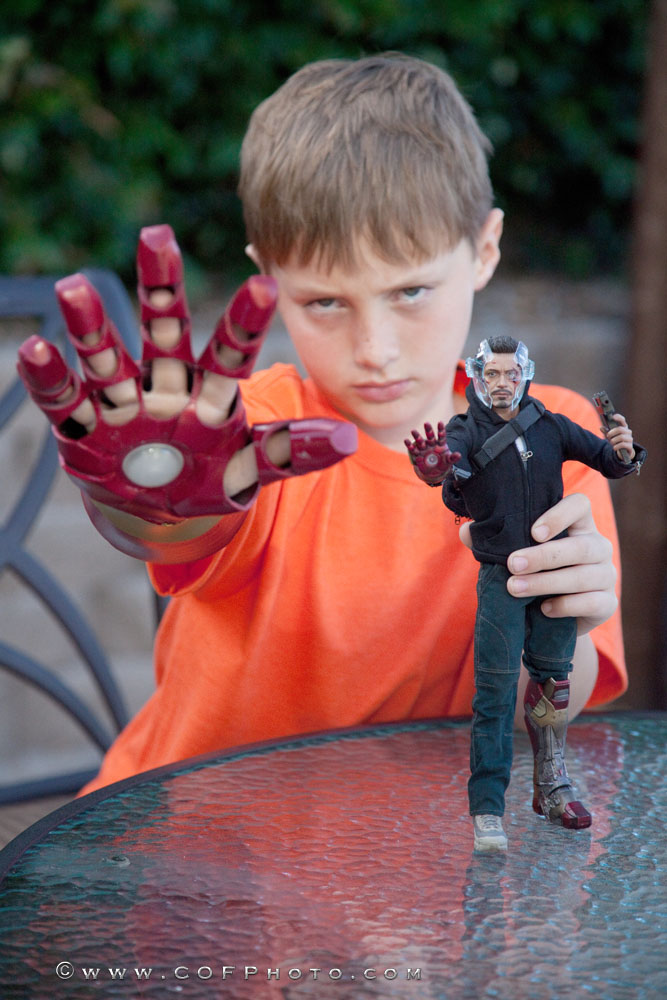 If you already have a number of Iron Man figures in your collection (as most of us do), both of these figures are sure to be a great addition!

Until next time,
Shawn and Gavin 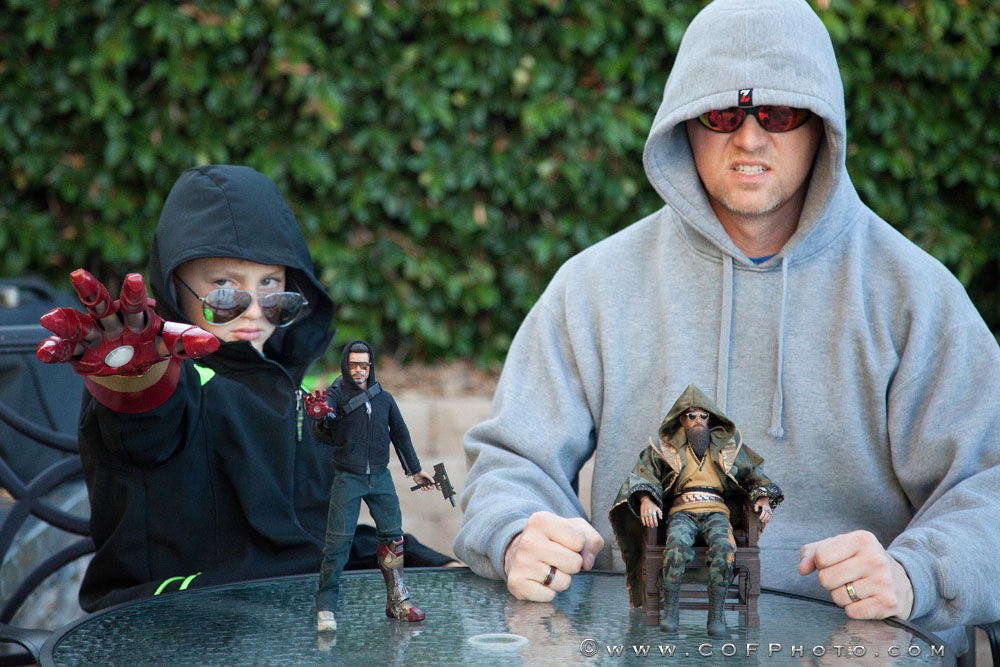 Inside the Sideshow Studio Book