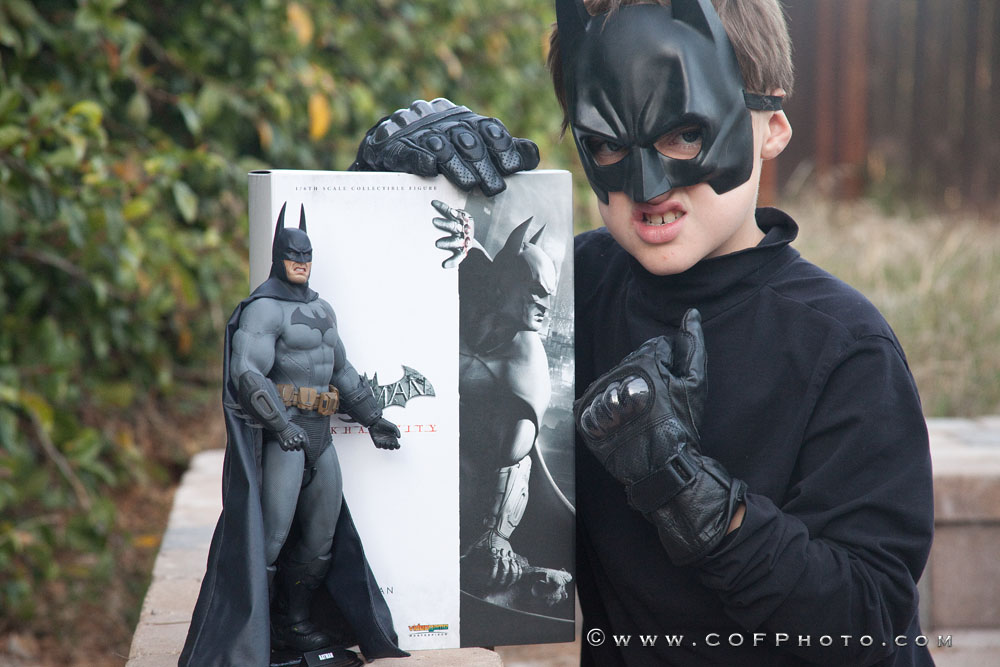 No surprise there when this was Gavin’s initial response to unboxing the Hot Toys Arkham Batman figure (with a huge grin on his face I might add). The Hot Toys Dark Knight figures perfectly capture The Dark Knight, but make no mistake this figure IS Batman.

“Presence” is often a word to describe Hot Toys figures, and Arkham Batman certainly has it. He’s big. Like comic book big – much beefier and angrier than the DX12. And not just the figure itself, but the gauntlets and boots as well to match. 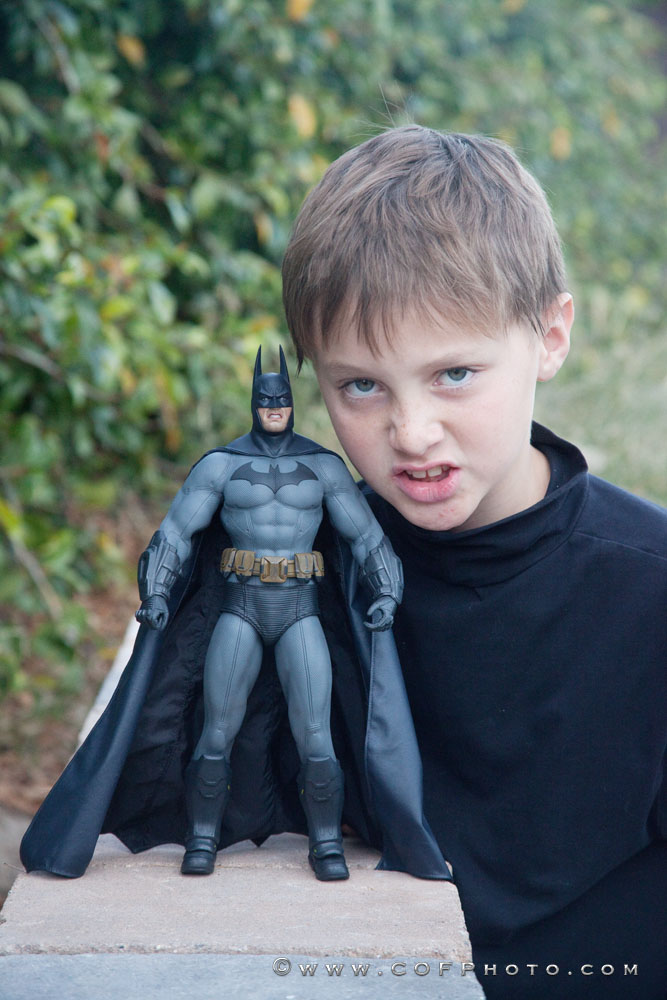 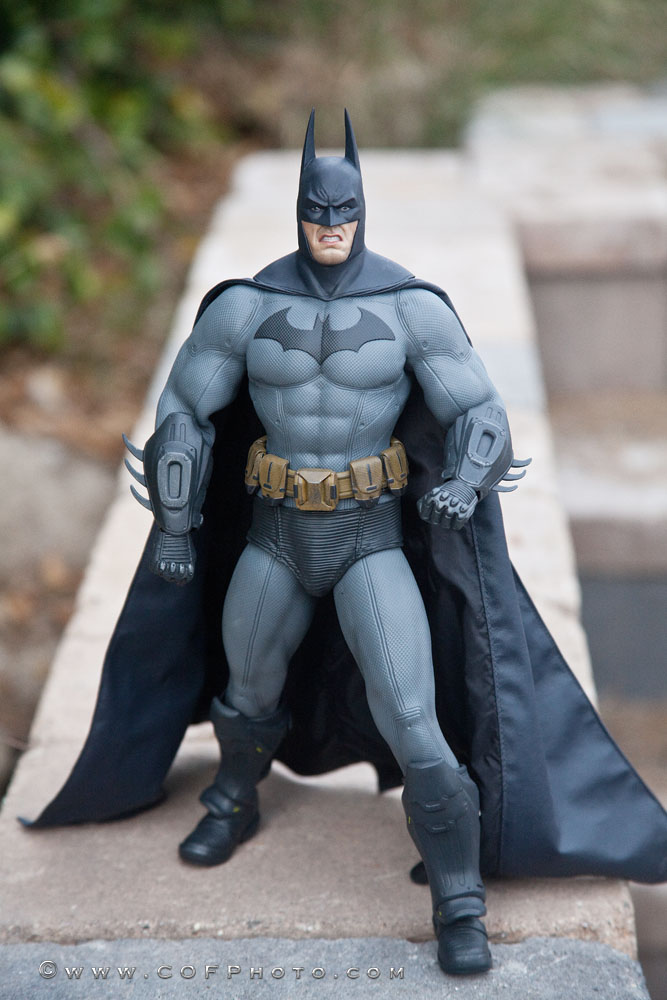 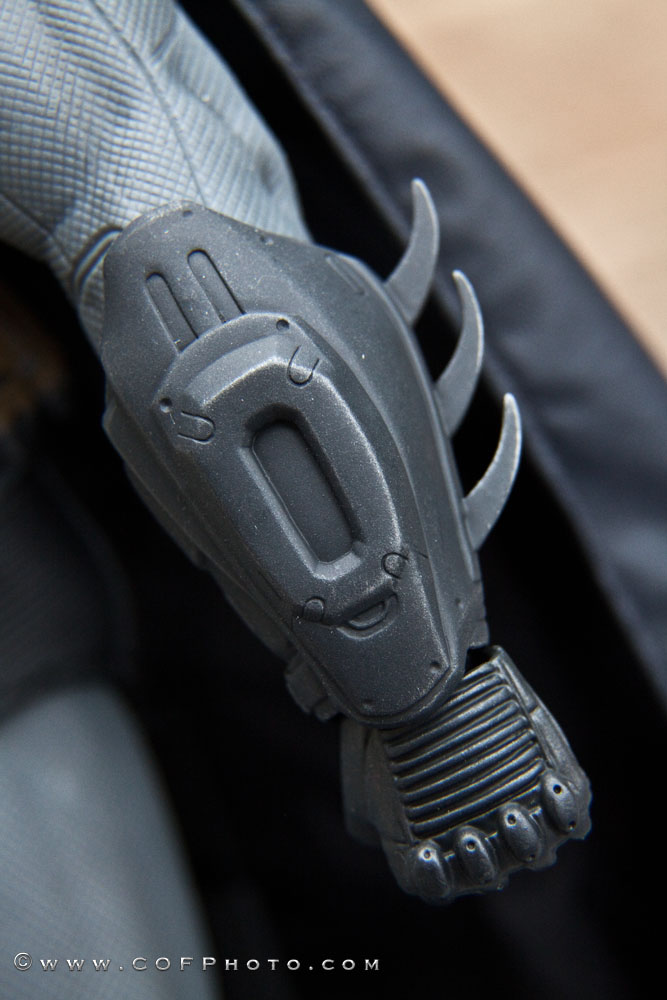 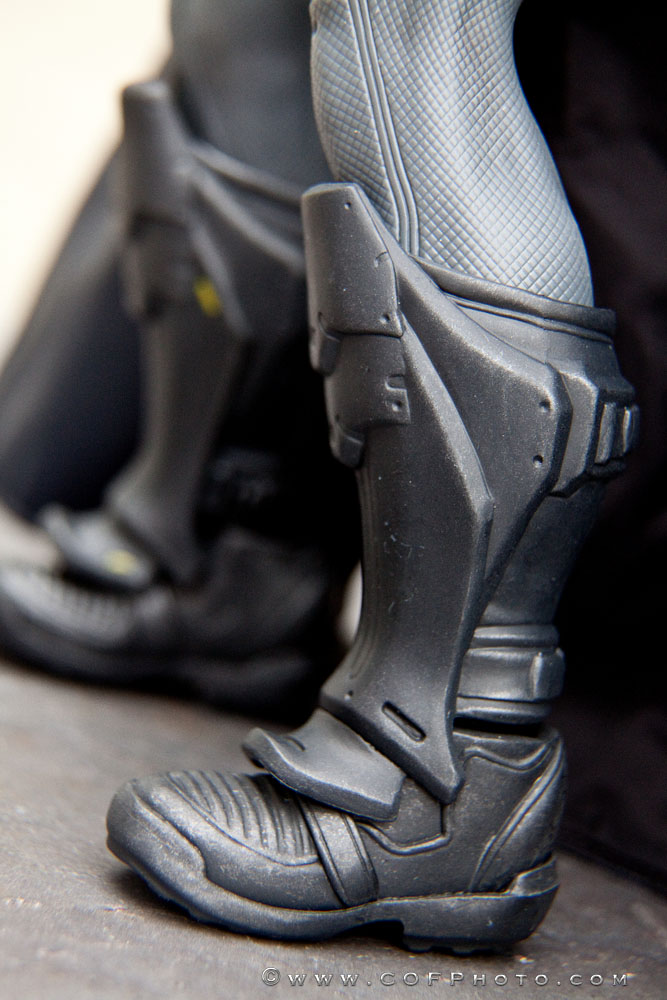 My son and I have each spent hours playing the first two Arkham video games and we’re getting an Xbox with the third game for Christmas (the wait is killing us). Gavin loves all of the gadgets that Batman has in the games, so after spending a minute with the figure he went straight for the accessories. 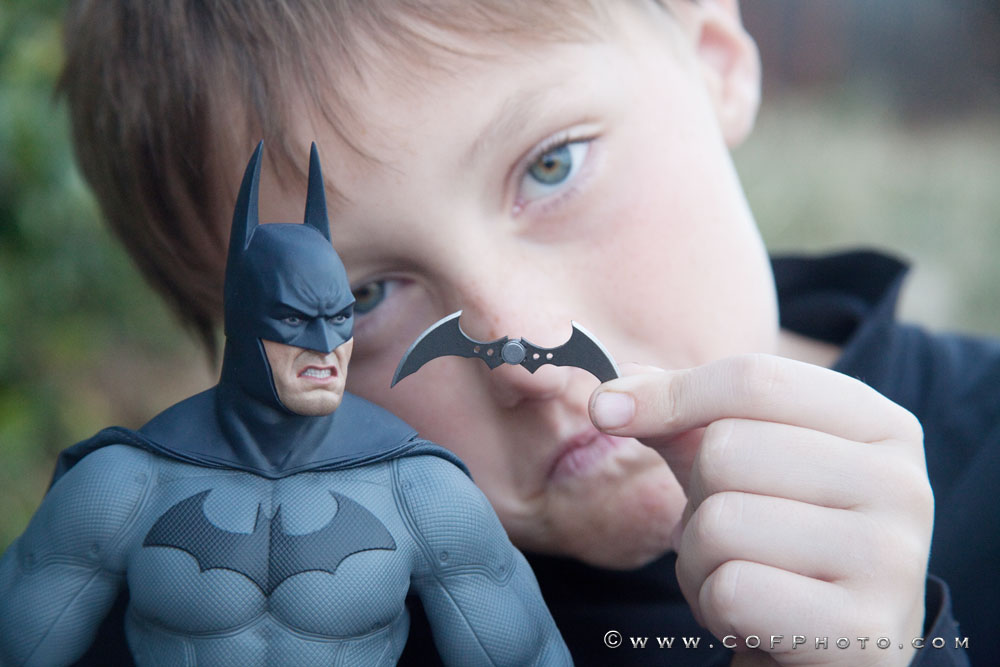 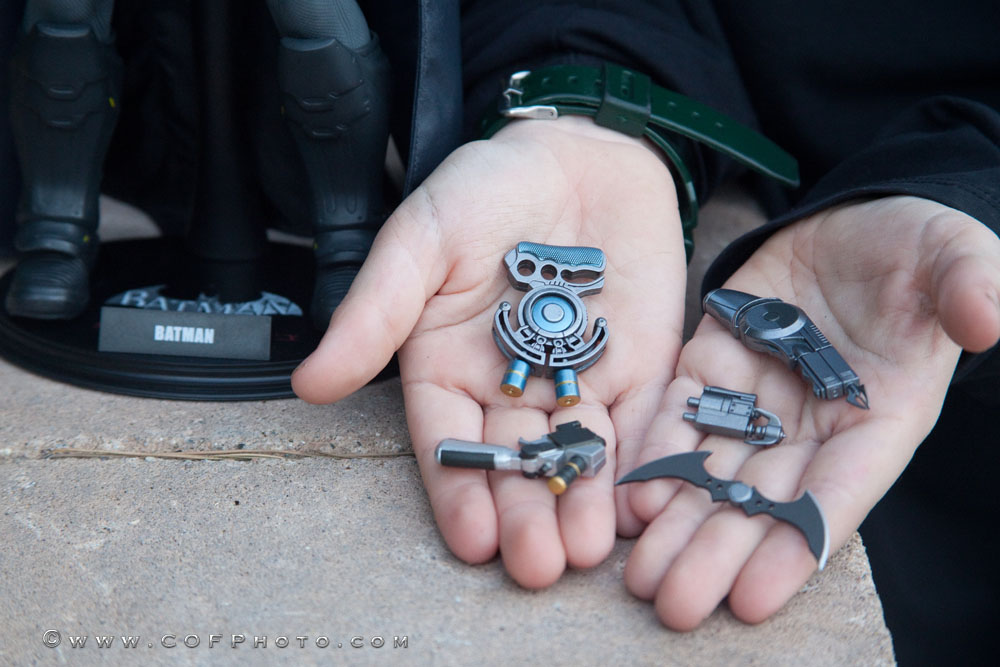 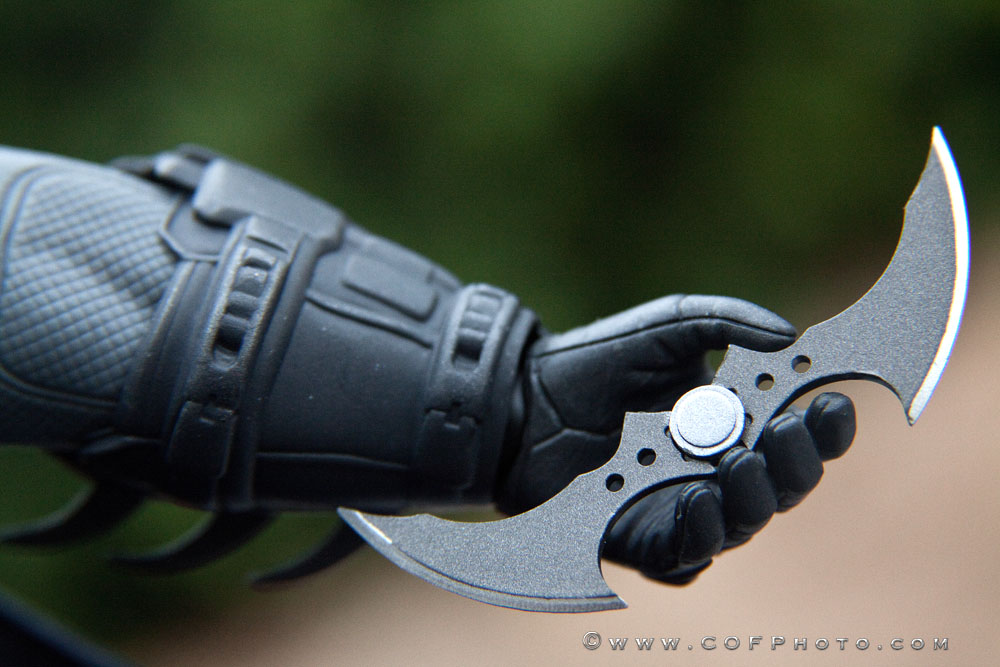 The Batarang was our favorite, but there are several gadgets and numerous hands available to pose them properly with the figure. 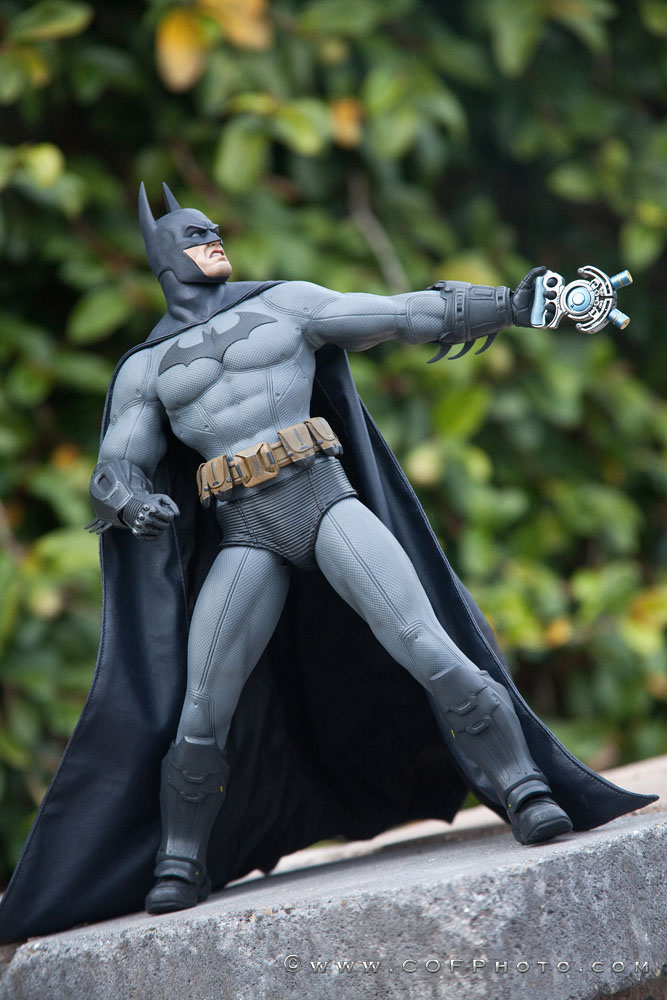 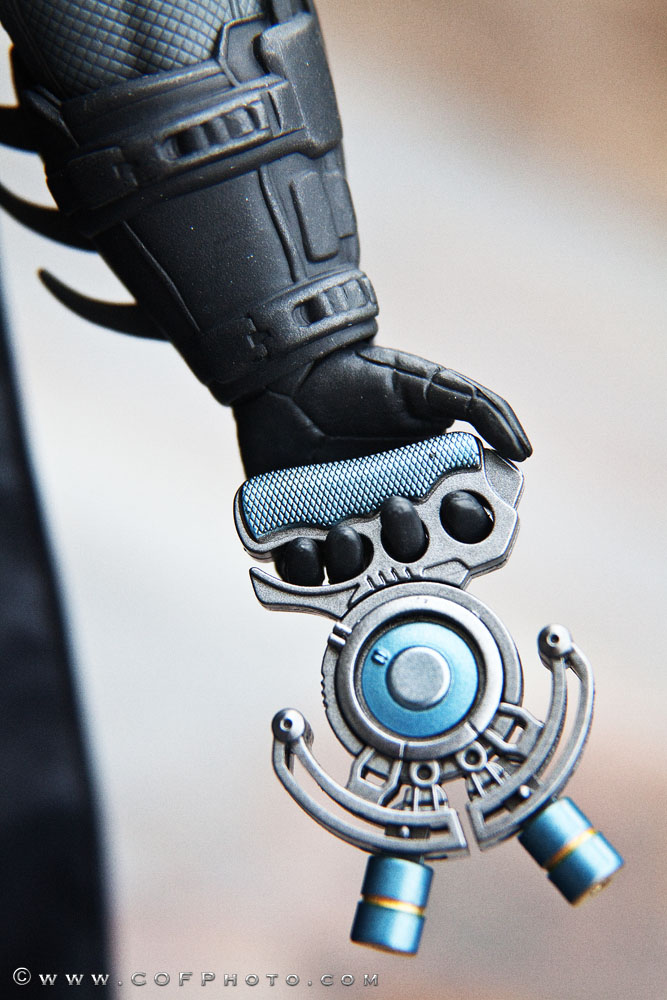 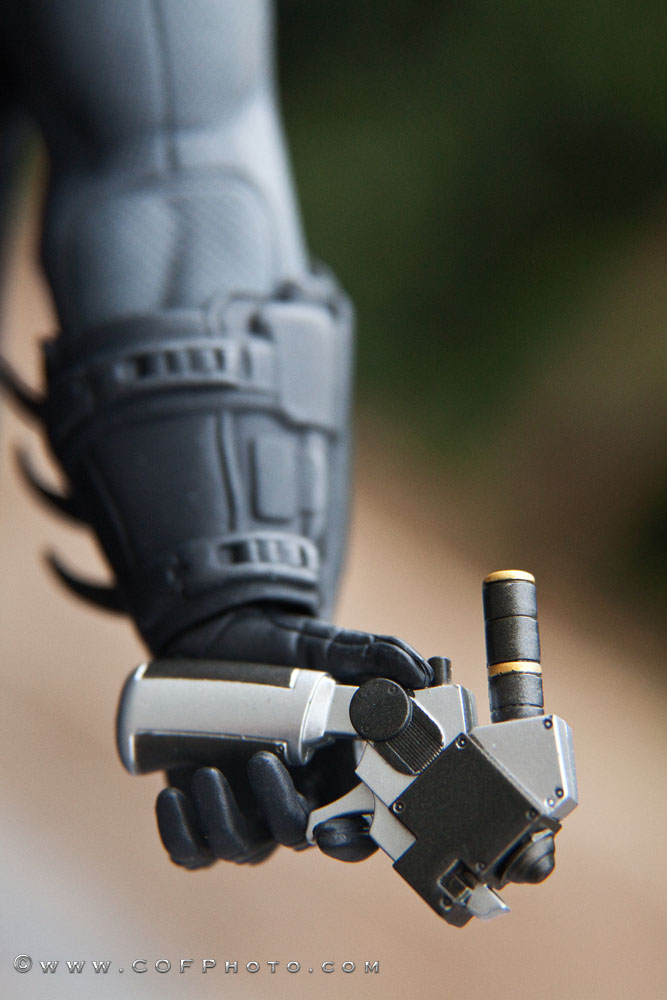 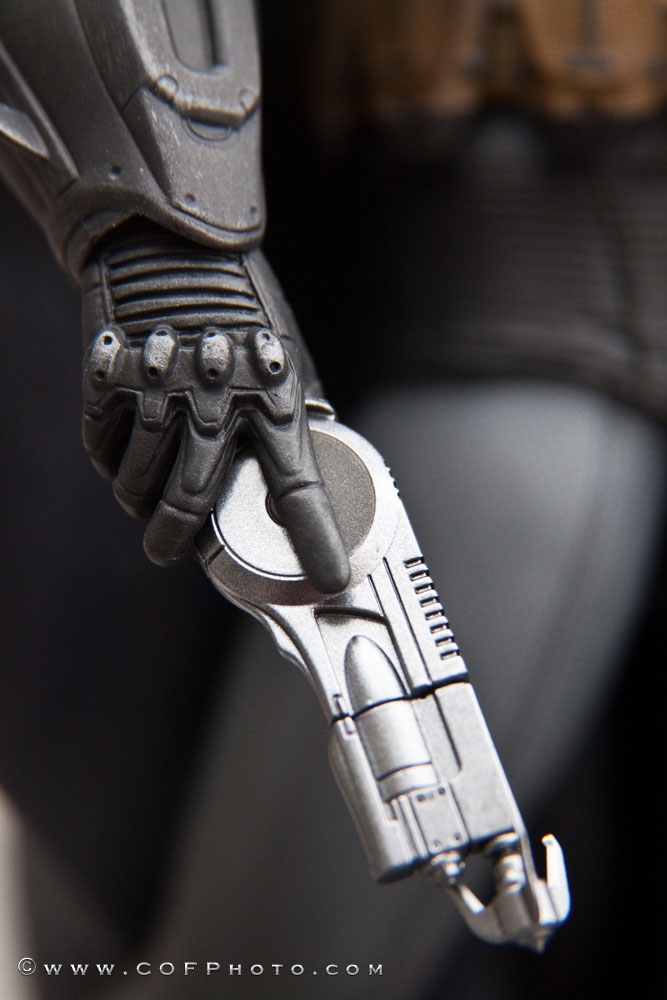 I like being able to change the expression of this figure using the swappable faceplates. We agreed that the angry faceplate was our favorite –  that snarl just makes Batman look so pissed off. I love it. 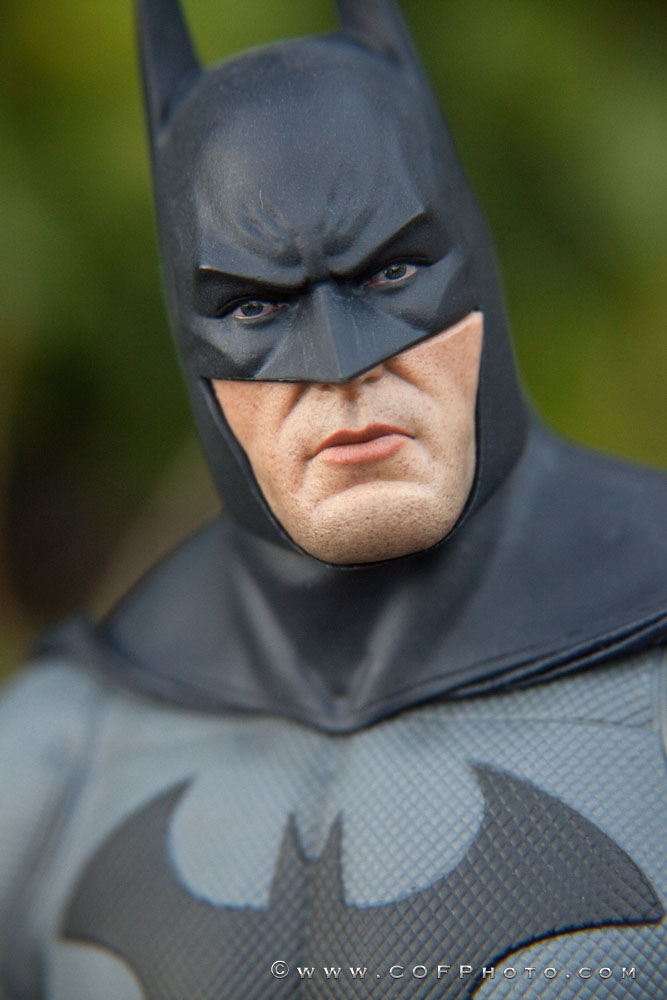 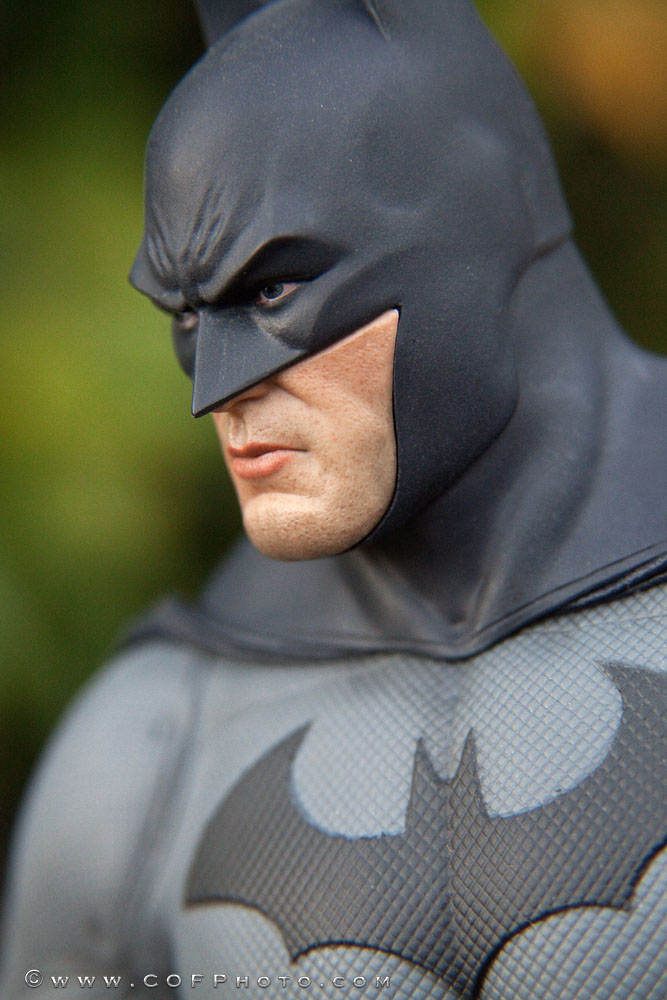 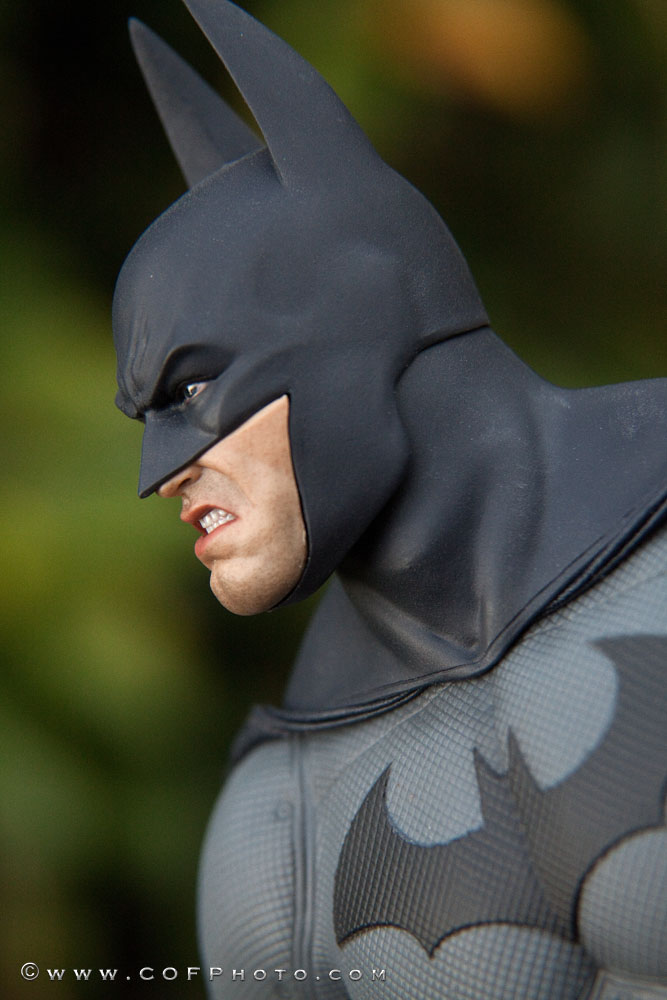 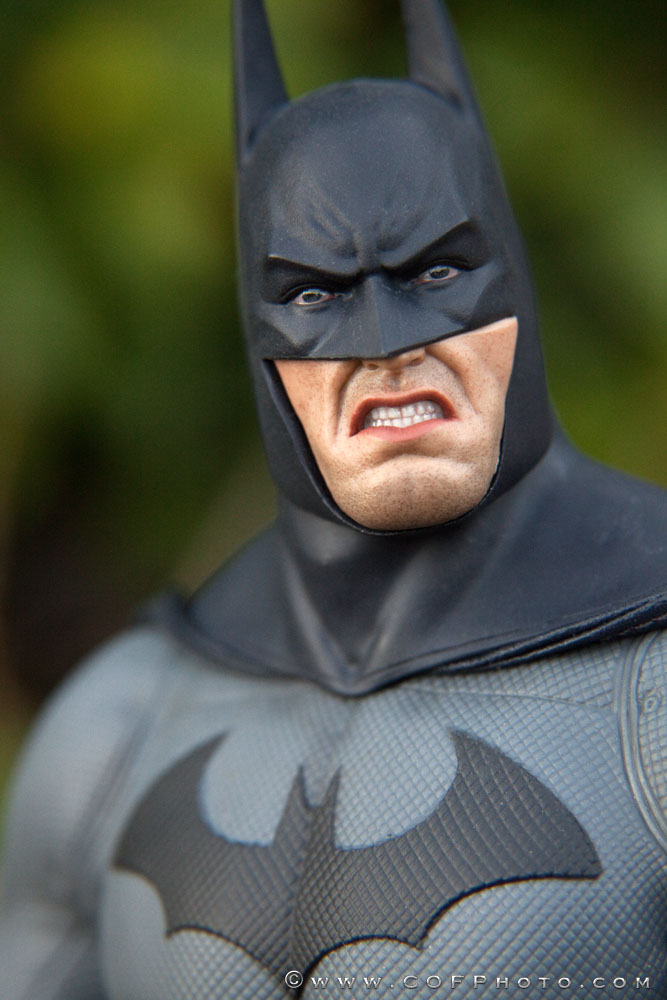 The suit is vinyl (not rubber), so there is no worry about it creasing or wearing over time. Also the suit comes in three pieces, including the upper body and each of the legs covered separately. This gives the lower part of the body quite a bit of articulation for posing, and the upper and lower parts of the boots are separate pieces to give the feet better articulation at the ankle. 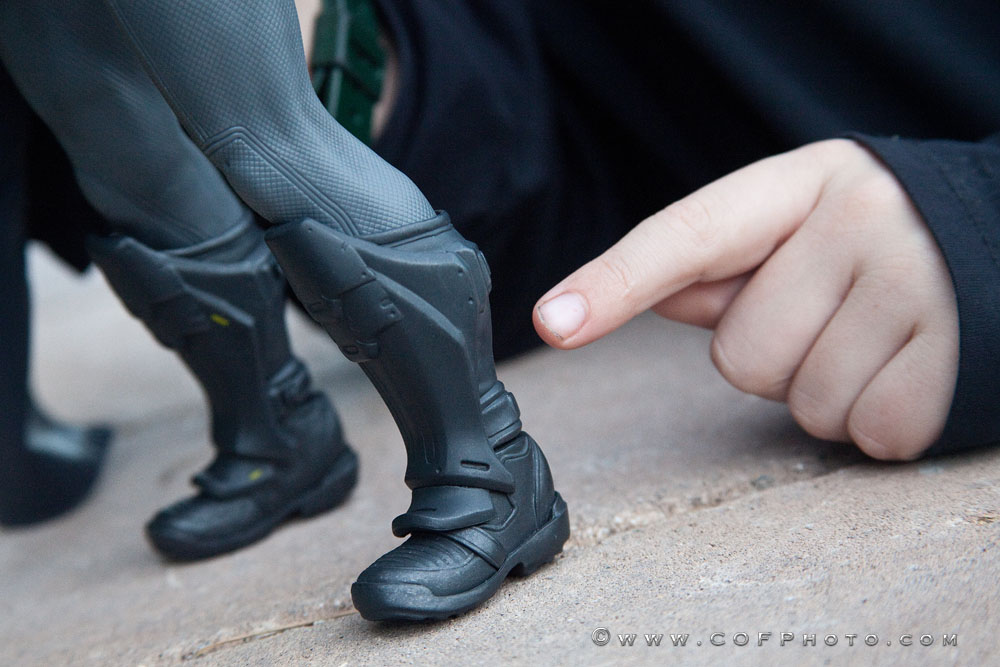 The upper body is more limited, but to be perfectly honest this figure does all of the posing that you’d need it to. Just standing there, arms out, pissed off and holding a Batarang is the perfect pose for me.

Gavin noted that the cape on this figure is nicer than the ones on the Dark Knight figures and I’d have to agree. It’s a heavier material and just the right length. We also prefer this more “comic” look of the Arkham cowl, with the much longer bat ears. 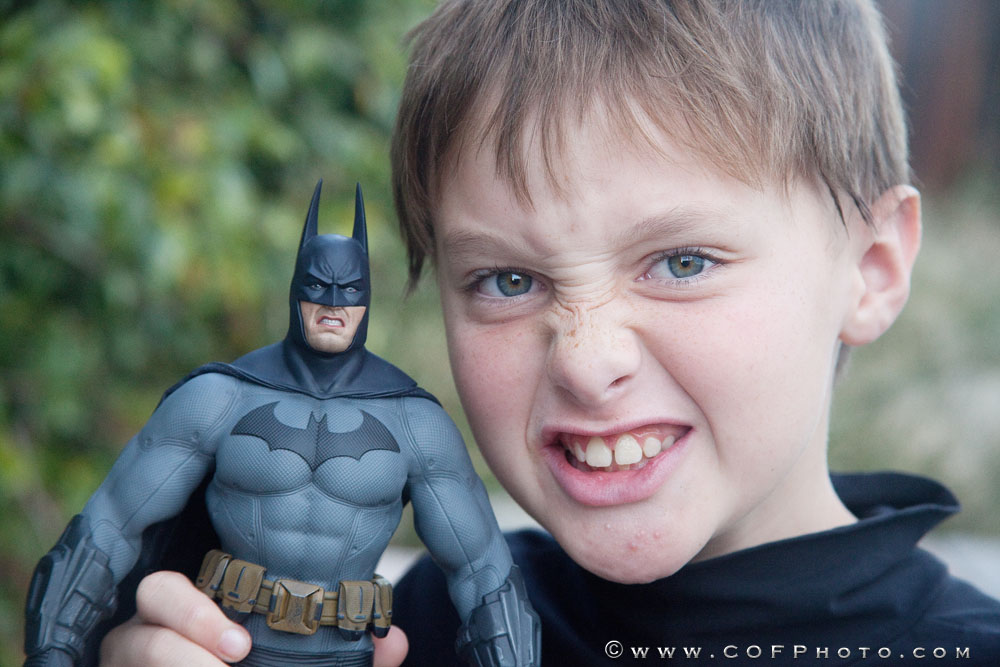 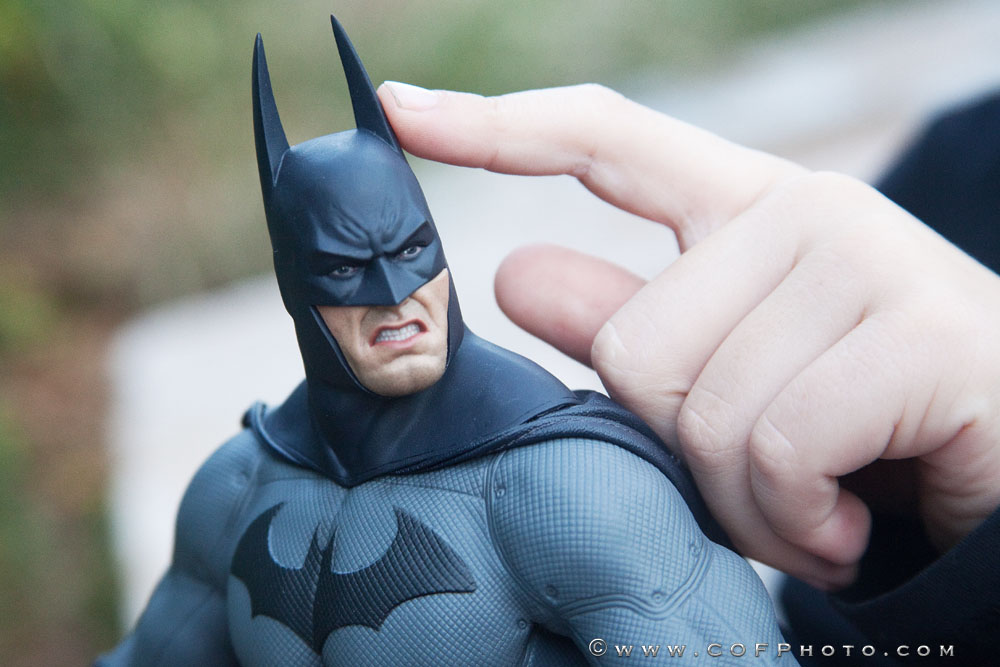 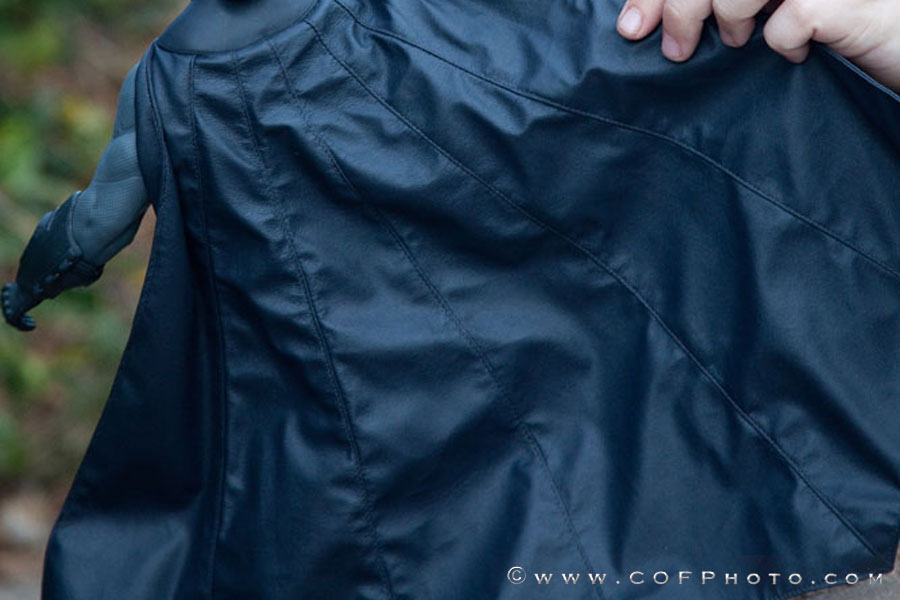 The only downside in our opinion is that Hot Toys hasn’t made more Arkham figures, as there are so many amazing renditions of the Batman characters in the Arkham video games. Everyone loves the Joker and Harley, but can you imagine what a Mister Freeze or Bane figure would look like? Wow.

Until next time…
Gavin and Shawn Richter
(aka The Richter Boys)