Earlier this week, Collider.com hosted an epic evening with the Russo Brothers at the Arclight Hollywood’s Cinerama Dome.  Following a screening of Avengers: Infinity War, both Joe and Anthony Russo gave a 2 hour Q&A session for eager fans dying to know more about this massive Marvel cinematic milestone. 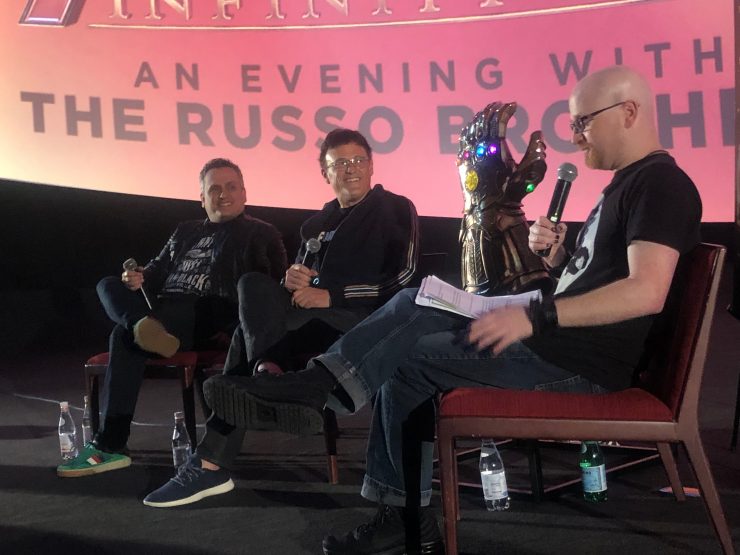 While Avengers 4 title and trailer news were of the utmost secrecy (any fan questions about the subject were humorously met with the sound of an airhorn), the brothers provided exciting new insights into the painstaking creation and execution of Infinity War, the on-set presence of Stan Lee, and their own inspirations as Marvel fans.

Not Until Secret Wars…

After discussions that the Russo Brothers would be taking a break from superhero films following A4, it was asked if they could possibly be tempted back by the Disney acquisition of Fox and eventually the X-Men.  Joe said, “Not until they’re ready to make Secret Wars.”

As Marvel fans themselves, Secret Wars was among one of the comic stories the brothers found incredibly influential.  As fans, they are just as excited to be seeing all of these characters coming home to one place.

While this was by no means an official announcement, the crowd reaction definitely proves there’s an audience of Marvel fans who would love to see Secret Wars hit the screen- we can only hope it’d be helmed by Joe and Anthony.

Why Avengers: Infinity War and Avengers 4 Were Shot Separately

The brothers discussed their original plans to film Infinity War and A4 simultaneously, but due to constraints and extensive production meetings on logistics, they had to film separately, although they worked on each film back to back.

Anthony remarked that he came down with a case of pneumonia and acute bronchitis during the production- Joe joked that they wheeled his sick bed onto set because filming couldn’t stop.

It was also revealed that no actor really had the entire complete script- “We only let people know what they absolutely needed to know,” in order to maintain secrecy and minimize plot leaks (although they joked about firing Mark Ruffalo due to his notorious loose lips).  Fake scenes were written into the script and others were redacted to further the commitment to protecting the integrity of the project.

Actor availability heavily influenced the schedule of the project.  “No one is actually ever onscreen together,” Joe joked about the coordination of the biggest names in the MCU.

Thanos was Originally the Narrator

Joe and Anthony then revealed that three radically different drafts of the film had all been passed around the writers room through development.  One particularly notable draft was a nonlinear version of the film with Thanos as the narrator.

This draft- which came to around 250 pages, according to Joe Russo- also featured specific introductory sequences and backstory for each member of the Black Order.  While this draft was unused, the writing helped to deeply inform the Avengers: Infinity War team about the subtext of Thanos as a character, and what his motivations and ideals were going into the final film. 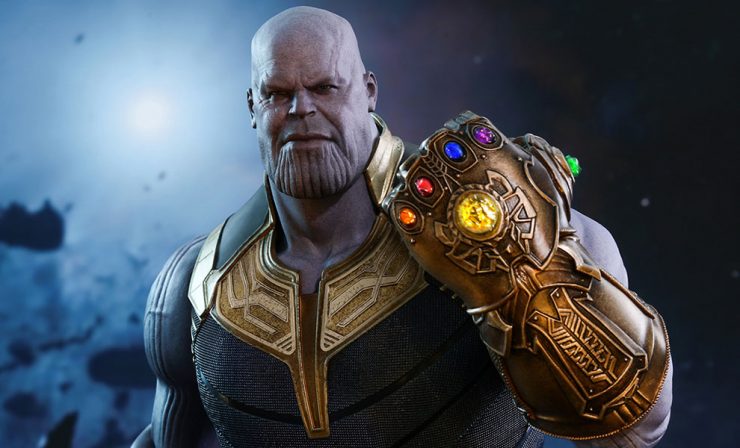 Of the final draft, the brothers remarked that Avengers: Infinity War plays to them like a heist film- “Thanos is enacting a heist,” which features multiple “macguffins” that everyone is trying to get to first.

How Much Story Changed On Set?

When asked about on-set changes, Joe and Anthony explained, “We like to go in with a very tight script… but the process is open to evolution during the execution of the film.”  Of course, they elaborated, the text takes on a new life when actors come into the picture, and sometimes the performers bring new ideas to the table.  They also explained their “plussing” methods, which involve a very secretive process of obtaining audience feedback and allowing that to inform any scenes they may need to punch up.

The brothers detailed a deleted scene that was “plussed” that unfortunately did not make it to the DVD release- instead of the Central Park scene with Tony Stark and Pepper, they tried a version in which Tony reclined on a lawn chair on his front lawn, holding the flip phone that is used to call Steve Rogers later in the film.

They ultimately decided that Central Park had more energy and added more to the scene when Doctor Strange arrived to summon Stark to the Sanctum Sanctorum.  To their knowledge, this is one of the only deleted scenes that did not make the home release of the film, as they tried not to create too many extraneous scenes (beyond the false scenes written into the scripts for secrecy).

“Nothing is better longer than it was shorter,” Joe said of the editing process.

Any unfound Easter Eggs in the films?  “We forget, usually.”

Of the Easter Eggs incorporated, Joe and Anthony remarked, “These usually happen in the edit room or on set- like, wouldn’t it be funny if-?”  They attributed several Easter Eggs, such as the Newman’s salad dressing in Robert Redford’s refrigerator in Captain America: The Winter Soldier, to the humor of one of the props masters.  Other pop culture references included the Pulp Fiction quote on Nick Fury’s “grave,” as well as numerous references to Arrested Development (a series the Russos previously worked on) in both Captain America: Civil War and Avengers: Infinity War.

“Was Cull Obsidian’s belt a Captain Marvel Easter Egg?” asked one fan (a hotly debated ‘EE’ among the fan community, who note a striking resemblance between the color scheme of Cull Obsidian’s ‘trophy sash’ and Carol Danvers’s iconic uniform).  Joe and Anthony conclusively said no, this is not an intentional reference to Captain Marvel.

“We don’t want to ruin if for you,” the brothers said, “but Josh Brolin looked ridiculous.”  This was largely thanks to the extensive motion-capture equipment the actor was required to wear to (eventually) bring Thanos to life.

They described Brolin’s work uniform as white and black pajamas covered in ‘ping-pong balls’ for tracking movement and musculature.  Then, for characters taller than human size, like Thanos and the Hulk, the actor must wear an eye-line pole with a tennis ball attached at the top.  Additionally, for facial movement capture, a head camera must be worn around the face.

“Ruffalo also wears a ‘modesty cloth’ because the mo-cap pajamas are skin-tight.”

What stone would the @Russo_Brothers most want to have for themselves? #thepizzastone
You heard it here, folks.

Of course, the evening could not go on without remembering Stan Lee.  The Russos said that there are, “very few people in this business that you just lock up around.”  They recalled his major impact on their lives- “We were like kids,” whenever they had Stan “The Man” on set to film his cameos across the various films.

Joe and Anthony remembered him as always being fun, always a blast to have around, and the crew would line up to meet him on those days.

“Figuring out Stan’s cameos was fun. His energy was exuberant and he lit everyone up around him. He always wanted more lines and more screen time, but he knew the value of making the most of the moment.”  His unforgettable impact will live on forever in his all-important cameos, and fans will see Stan in an Avengers 4 cameo filmed prior to his passing.

According to Joe Russo, Stan always joked on set, “How come I only get one line?”

Huge thanks to Collider and Arclight Cinemas for hosting this unforgettable evening with Joe and Anthony Russo.  You can find even more Collider screening event coverage at Collider.com.

Fans can currently pre-order the Infinity Gauntlet Life-Size Prop Replica from Hot Toys, as seen on stage during the incredible interview! 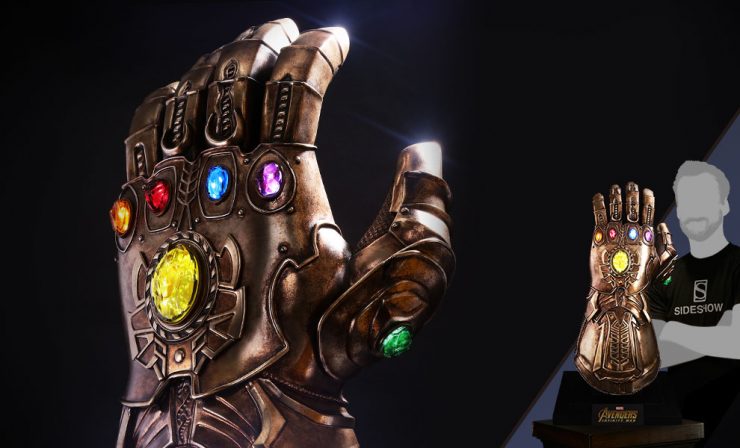 Who’s ready for an Infinity War rewatch with all this new knowledge?