I started collecting as a girl, maybe the age of 7? I received a Holiday Barbie I thought was “too pretty to  take out of the box!” And that’s when I started collecting Barbies. At 36 I still get a Holiday Barbie at Christmas…but my “adult collection” consists of Harley Quinn everything and that started about 15 years ago, when my roommate got me into graphic novels. He had a small collection of Joker toys and statues, and I started a collection of HQ toys and statues after finding one of her comics at a collectibles swap meet. I related to her story in ORIGINS and…I’m a small blonde psychologist (animal behaviorist), with a heavy East Coast accent (I lost that bit in “real life” but can pull it out in a pinch, for my cosplay)! Except for the killings and beatings and being fictional, we’re practically twins! ^_^

I have a MUSEUM of Harley Quinn collectibles, including statues, plushies, animation cels, original comic art, any/every cover and variant cover she’s ever been on (yes, Batman Adventures 12…signed by Bruce Timm AND about 8 international variants of it, as well…), the list goes on and on.  I also have a section of Gotham City Sirens , since I love that storyline…AND I’m in the process of setting up my DC BOMBSHELLS themed guest bedroom. I have every HQ statue,  but *all * the others as well (plus the keychains, makeup, Pins, pennants, decals, etc.) and am close to getting each cover issue (SS CGC’d) to place with the statues when they’re on display! Note: I don’t collect the Suicide Squad or Birds of Prey MOVIE versions of HQ. I will add any other version, but my favorite is her classic catsuit look from BTAS. 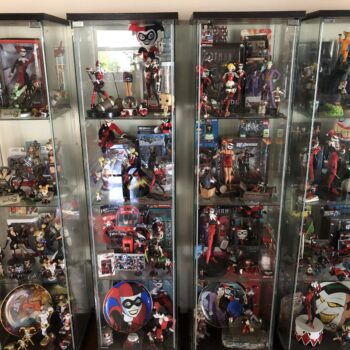 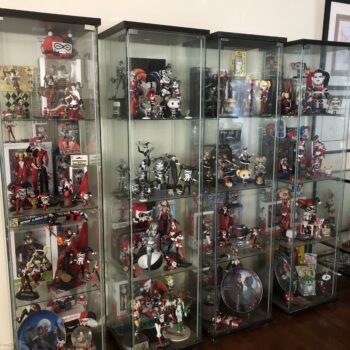 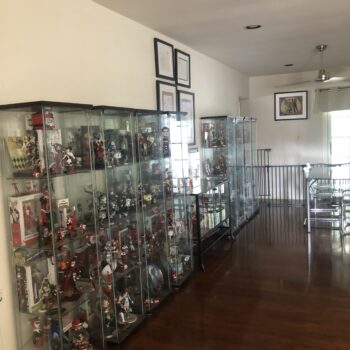 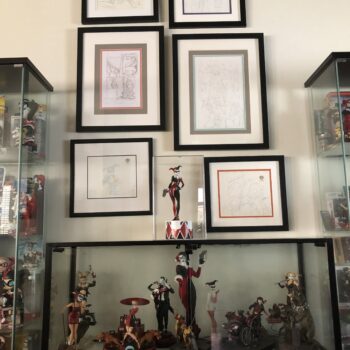 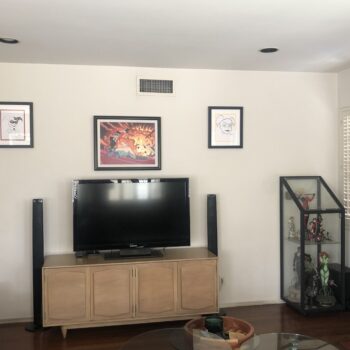 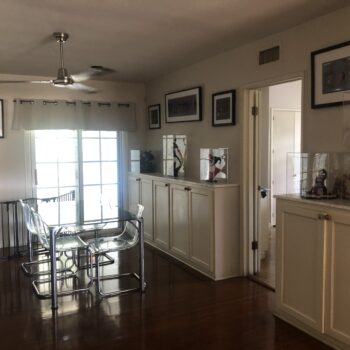 I think the sheer size of it. It’s just so much…and it’s *mostly* on display everyday. I say mostly because I’ve fallen behind in my “case organization,” and finishing my theme room, but I’m getting there. When people come in my house their mouths drop. It’s really cool to be able to tell everyone who doesn’t know who she is. It’s also really cool when someone knows about comics, Batman, and/or Harley and they FREAK OUT when they see my collection. I think, too, it’s the variety of stuff I have. It started out as statues and a few toys (kept in boxes), but then exploded (now I buy 2 of lots of things, 1 to keep in the box and 1 to display). I like to say “it’s not hoarding if you display it…if you display it, it’s a collection!” ^_^

My favorite statue of Harley is  the DC 1:4 scale Museum Quality Harley Quinn, the statue with HQ in her original catsuit (including her cowl), walking her hyenas – Bud and Lou. Lou has a piece of Batman’s cape in his mouth and Lou has some dynamite in his. The leash is really a tiny leash made of metal chain with a leather handle. Her cork gun has a real cork in it that comes out and is attached with a small metal chain, as well. Her costume is fabric, and fits like a glove. Her makeup is stunning. She looks *so* real. Plus, it’s huge. I simply love that one and remember saving and saving and saving to get it, and then not being able to find it for sooo long. Eventually, I was able to buy it from a fella’ in Canada! It’s been on display ever since (10+ years). I’m also REALLY attached to the old Adam Hughes Women of the DC Universe bust. I try to model my “classic” or “HUSH” cosplay on her! ^_^

Right now, I’d like a custom art cover of Harley Quinn and Poison Ivy by Bruce Timm.  I don’t know if I’ll get it, unless I can commission it! I’m also looking for the rest of the Bombshells covers I need (signed & CGC’d) to go with my collection of statues. The item that’s been on the TOP of my wishlist for YEARS  is a maquette of Harley, Ivy, and Catwoman in the style of Bruce Timm and BTAS . I have seen it a handful of times. Some people have said it was a free marketing item WB sent out with their press kits. Some people say it’s an animation model statue. Some say it was a discontinued or even BANNED statue from an international WB Studio Store…but whatever it is, I need it! 🙂

Artist Tsuneo Sanda Welcomes You to the Guardians of the Galaxy Vol. 2 Fine Art Print