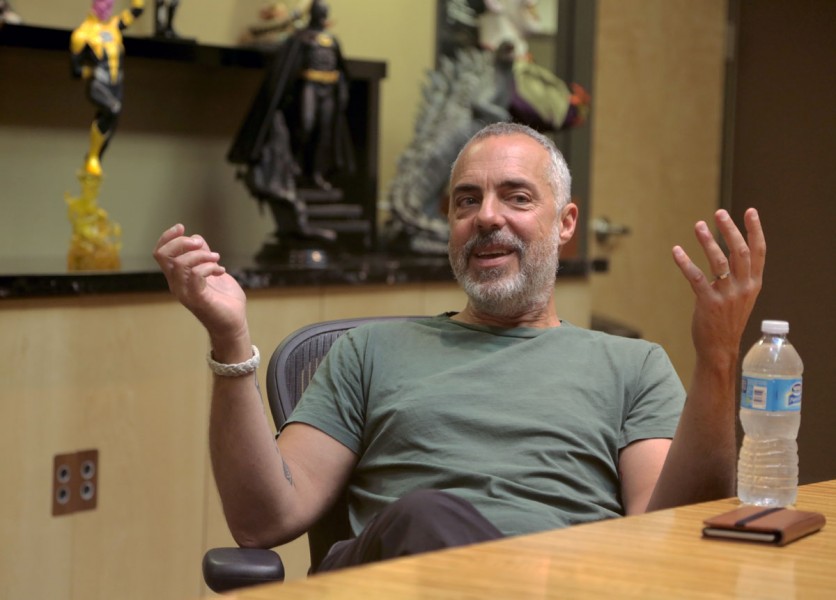 We granted Level 7 access to Agents of S.H.I.E.L.D. actor Titus Welliver at Sideshow HQ, and he sat down with us for a quick Q&A about the Avengers, Clark Gregg as a roommate and more. (We also may have accidentally converted him as a collector…)

First things first. Who is your favorite Avenger?
There are so many I’ve loved over the years. It’s so difficult to choose. I have to go with the Hulk. He’s such a tragic character, you know? He’s just a scientist. He never asked for this. It’s sad in a way. There’s something relate-able about that.

Will Felix Blake be back on Agents of S.H.I.E.L.D.?
Yes! Haha! I mean, I really hope so. Blake has more story to tell.

We heard that you and Clark Gregg were roommates. What was that like?
I think everyone should know that, out of all the friends who ever stayed at my place, Clark was the only one that kept things cleaner than I did. He’s also a really talented drummer.

You also star in the TV Series Bosch inspired by the novels by Michael Connelly. Which book is your favorite?
All of them. It’s a great series. I really enjoyed “Burning Room”, even though it’s an older version of the character. You read that and you know he’ll go on.

Which books are being looked at for Season Two?
We’re not sure yet. I know there are a lot of rumors flying around about Matthew McConaughey guest starring – because of his character in “The Lincoln Lawyer”. I can’t confirm any of that… But wouldn’t it be cool?

What do you think of bringing back the X-Files?
I think it’s a great idea. The show is timeless. Think of the current events and themes they could pull from! It definitely would speak to today’s audiences.

You’ve been around the workshop and met our artists, and you mentioned you have an artistic side as well. Do you still paint?
I do! It’s always been a passion of mine. My work is of the abstract, but a lot of my early sketches were of characters I liked in comics. I always wanted to be a comic book artist. It’s where I draw inspiration.

I had the honor to visit Sideshow Collectables today. There aren’t enough hours in the day!! Surpassed my fantasy! Thank [email protected]— TitusWelliver (@welliver_titus) March 14, 2015

The Plissken is beyond belief! Go to Sideshow Collectables site @collectsideshow and buy before they’re gone! pic.twitter.com/878kx66kEd — TitusWelliver (@welliver_titus) March 17, 2015

I have a Sideshow Collectibles issue! Thank you @collectsideshow pic.twitter.com/nvsk1CPVSX