Sideshow presents the Valkyrie of the Dead

Born the vestigial twin to a Valkyrie of Heaven, Kier was broken and incomplete, an abomination in the eyes of the Heavenly Host. And so she was cast into the void between realms to wither and die. This is where Death found her, and within her pitiful form saw a reflection of what he once had been – A helpless and lost child unwanted by both the powers of Heaven and of Hell.

And so, for the first time in many an age, Death raised a new creation by his own hand – a loyal daughter who would stand at his side. She became the Valkyrie of the Dead, a warrior who serves the Court of the Dead by scavenging the unwanted souls broken by the battlefield and giving them a new purpose – a chance at redemption within the ranks of Death’s secret army.

Discover more about Kier, the Valkyrie of the Dead at CourtoftheDead.com 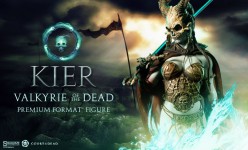 Court of the Dead Kier