As passionate fans ourselves, Sideshow staff understand how important it is to represent your passions with cool swag- what better place to find geeky goodies than at Comic-Con?  Our interests are diverse as we are, and so all weekend Sideshow got to share in the fun celebrating Marvel, Star Wars collectibles, DC, and more through the events and displays at the booth.

The staff worked tirelessly all throughout the weekend, but we still managed to squeeze some extra fun (read: shopping!) in before the show floor closed each night.  Here is some of the awesome swag Sideshow staff were able to snag while they enjoyed the show- 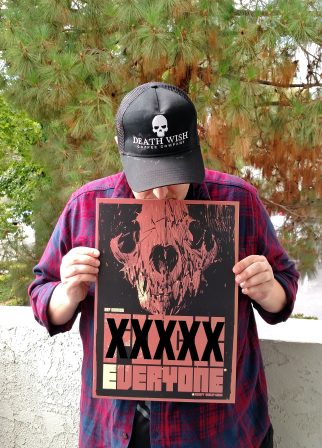 My SDCC score was “[email protected]#K EVERYONE” a limited edition oversized comic book by Ninja, ¥o-Landi and Ashley Wood, released by ThreeA / ZEF Comics. I love Ashley’s collaborative work with Die Antwoord, and I already own a few of the figures they’ve released. It’s a pottymouthed, punk rock, pop culture masterpiece, and a genuine work of art. I’m glad I was able to grab one. Even the slip sleeve that it came in is going in a frame in my apartment. -Andy 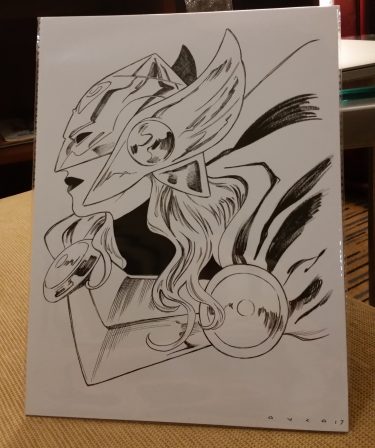 I got a gorgeous commission of Jane Foster Thor from Kris Anka, one of my favorite comic book artists.  His attention to detail is stunning!  With the Hasbro “Battle for Asgard” figure set, I absolutely can’t decide if I want to take the figures out of their elaborate package or not!  I usually display everything out of the plastic, but the box itself is a work of art. -Amy 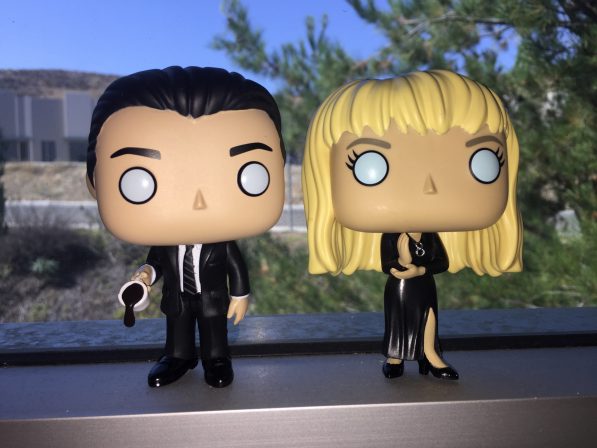 My favorite thing that I picked up at SDCC this year was Funko’s Twin Peaks Pops Exclusive – featuring Black Lodge Agent Cooper and Laura Palmer. David Lynch is a master storyteller, and I love the new series because it makes you think and question reality. These little figures will be a constant reminder that nothing is what it appears to be! Or, as Agent Cooper might say: HellOOOOooooooOOOOOoooo! -Anna 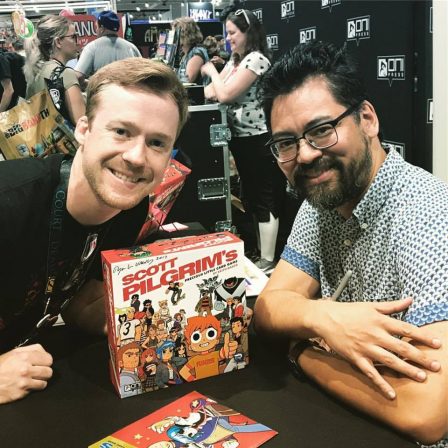 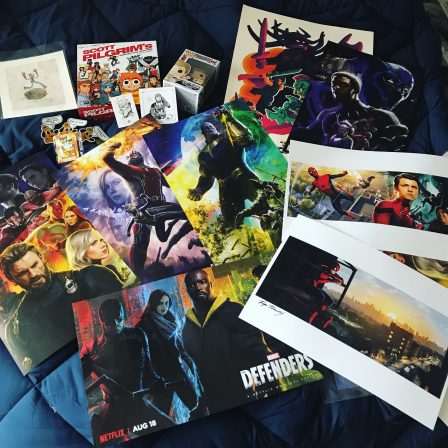 I have been a HUGE Scott Pilgrim fan for a long time, and was so ecstatic and grateful to be able to meet my graphic novelist hero, Bryan Lee O’Malley, and get to talk to him about the new card game and have him sign it. I can’t wait to play it with all my friends! -Erik 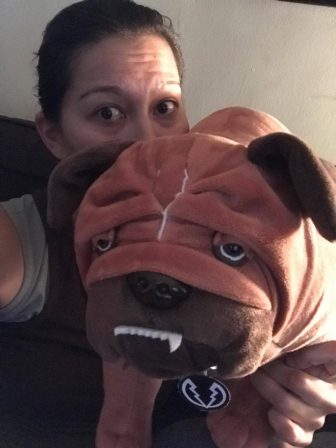 I am crazy obsessed with the Lockjaw plush I got from the Marvel booth. I can’t wait to see him on Inhumans! -Susan 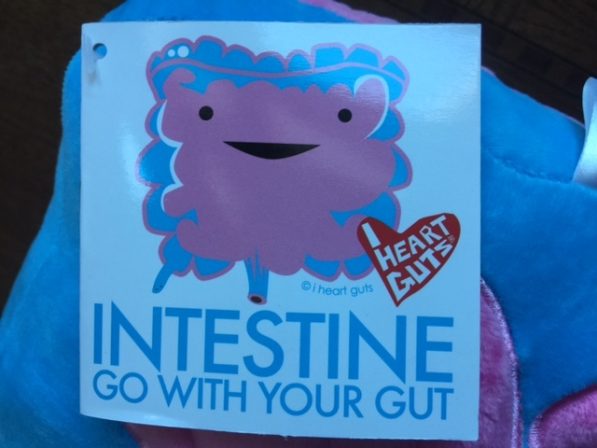 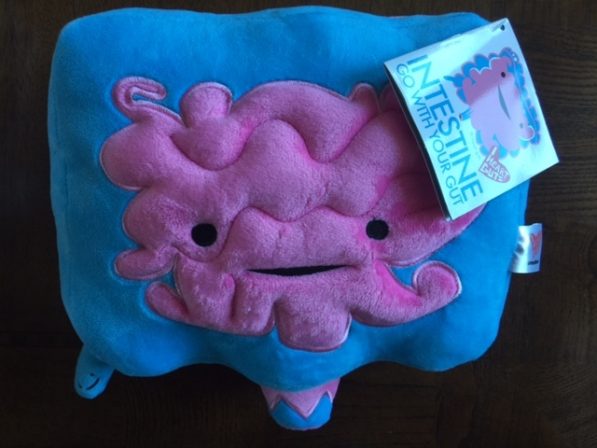 I love this little booth. This year they added heart of gold and black heart.  Scored me a plush intestine! -Chicky 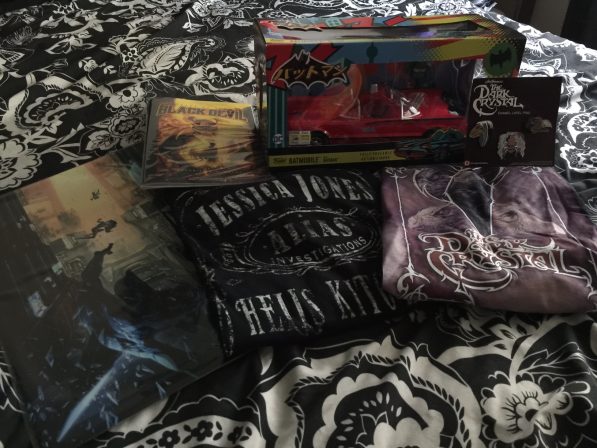 I didn’t have much time to walk around the con this year but I wanted to make sure I visited a few folks’ booths, including Satellite Soda and Zachariah Roane to support their time at the con. I was also able to pick up Funko’s 1960’s Batman TV series exclusive and found some other gems from the show floor! -Alex 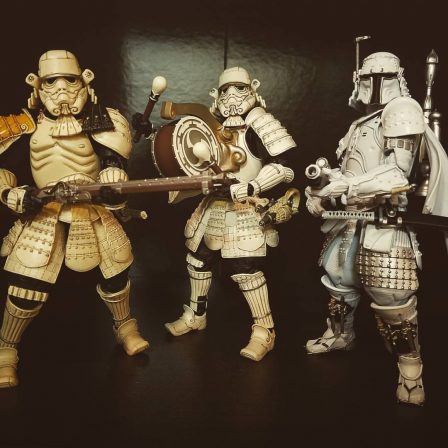 I bought two more figures to compliment the Sandtrooper I already had.  So I have the Taiko drummer and a Prototype Boba Fett.  I bought the Sandtrooper to celebrate moving down to Sideshow and it’s my 1 year anniversary so I might have to make this a yearly thing. -Scott 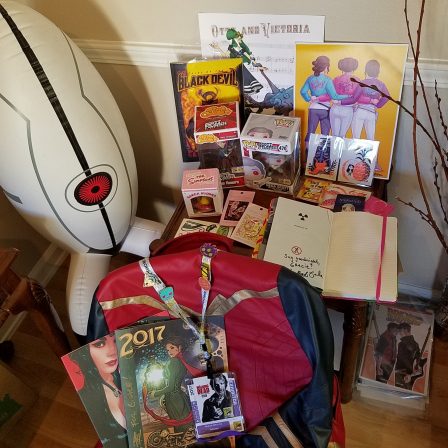 Among the prized possessions I hoarded back from the show are a pair of sketchbooks that were a gift from Adam Hughes, who graciously signed and personalized them to me after I put him through the rigorous task of signing 550 art prints for Sideshow.  Another highlight was meeting Bob Gale, co-creator of Back to the Future at the Insight Editions booth. Now if I just had a time machine to experience it all over again! -Gracie 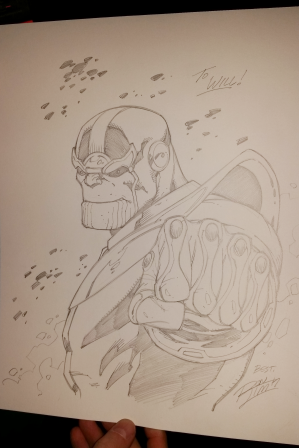 At Comic-Con, I got this drawing of Thanos by comic book artist Ron Lim.  He worked on the Infinity Gauntlet series, and his Thanos portrait is actually what I based our sculpt of Thanos Maquette on!  He was so excited to hear that, and it was really great to be connected with him at the convention.  -Will

We are so grateful that we had the chance to flaunt our fandom and let our collector side show this year at Comic-Con!  Everyone on the team has such widely varied interests, so it’s great to see how everyone celebrates with swag and excitement.  Thank you to everyone who came and shared the fun with us during SDCC, as fans, collectors, and friends!

How did you treat yourself during SDCC weekend? Were you at the show or following along from home?  Maybe you’re waiting to check out some of the amazing new products that debuted during Online Comic-Con!

If you want to take home a piece of the action, check out our Contests page, with the epic Thanos giveaway, and some others ending soon that launched during SDCC, like our Captain Marvel and Wonder Woman Premium Format™ Figure giveaways!