Silk and Spider-Gwen: The Sensational Spider-Women!

New York is a big place. In fact, one might say it’s too big for just one spider-themed super-hero to get anything accomplished, what with all the goblins, vultures, and cybernetic octopi wreaking havoc. Luckily, in times of trouble there are a couple of women, each with their own set of skills and spider powers, willing to take on the mantle of your friendly neighborhood Spider-Hero! 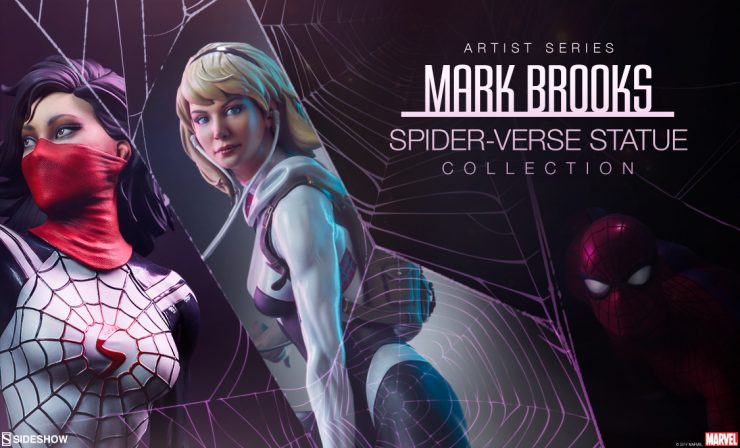 With the announcement of Sideshow’s Spider-Verse Collection (with spectacular designs by artist Mark Brooks), let’s take an in-depth look at these Sensational Spider-Women who are able to kick just as much villain butt as everyone’s favorite wall-crawler!

Everyone knows that Gwen Stacy was sadly murdered at the hands of the Green Goblin, and that that tragic event has become one of the driving forces in the life of Peter Parker. But what if there was an alternate universe where Gwen was still alive? Not only that, but a universe where she was the one bitten by a radioactive spider instead of Peter?

Welcome to the universe of Earth-65, and the fantastic adventures of Spider-Woman A.K.A. Spider-Gwen! In this universe, Gwen becomes the web-swinging super-hero, and she must balance her courageous crime-fighting career with attending college classes and being the drummer in her band, The Mary Janes. Easy, right? Yeah, not so much. On Earth-65, Peter Parker, sick of being bullied by classmates, creates a serum to turn himself into a lizard monster (That sounds oddly familiar). Pushed to his breaking point, he uses the formula on himself during prom night and goes berserk. Spider-Gwen swings to the rescue, but the battle is too much for both fighters and inadvertently leads to Peter’s death. This causes Spider-Gwen to be dubbed a murderer and a menace by the public, not to mention, a wanted fugitive in the eyes of the law. See? It’s never that easy.

On top of being a great take on an old character with a cool twist, her stellar costume design by artist Robbi Rodriguez really helped propel Spider-Gwen into the forefront of fandom. The white, pink, and black colors were a huge hit with fans even before her comic debuted on shelves, and has already become a hugely iconic part of the character in a relatively short amount of time.

The origin of Spider-Man is one of the most well-known tales in all of pop culture. A brainy high school kid gets bitten by an irradiated spider during a science exhibit demonstrating the use of radioactive rays. Everyone knows that, right? Well, what if we told you that same spider bit another person… just after it bit Peter Parker. Because that is exactly what happened, and that person was Peter’s classmate, Cindy Moon.

So why haven’t we heard this part of the story before? Soon after being bitten, Cindy was whisked away to live in isolation by a man named Ezekiel (Long story. Let’s just call him a rich old guy who happens to also have spider-powers) in order to prevent her existence from being discovered by The Inheritors (Even longer story. Let’s just call them scary vampires that eat people with spider-powers). 13-years later, Peter Parker learns of Cindy’s existence and frees her from her imprisonment, only to find out Ezekiel was right all along and that this action ends up kicking off an Inheritors cross dimensional feeding frenzy (A.K.A. Spider-Verse). Taking the super-hero name Silk, Cindy joins Peter and the rest of the Spider-Men and Spider-Women from across different realities to try and stop the Inheritors’ threat.

Despite being bitten by the same spider, Silk’s powers are a bit different than Spider-Man’s. While her super strength is not quite as strong as his, she makes up for it by being faster. Her Spider-Sense (or Silk-Sense rather) is much more attuned than Peter’s, and she can spin organic webbing silk from her fingertips. She uses this silk just like Spidey’s web shooters, to swing across the city and tie up bad guys, but she can also use it to make clothes. In fact, she spun her own costume, and has used this skill more than once to get both Peter and herself out of tight spots!

Both Spider-Gwen and Silk have the skills, powers, and quips to give ole’ web-head a run for his money in the hero department. They are every bit as capable as he is, and if Peter’s not careful, these two Sensational Spider-Women are going to end up stopping all the baddies before he does. So goblins, vultures, and cybernetic octopi beware!

Already a fan of Spider-Gwen and Silk? Good! Keep your eyes peeled to this space for more news from New York Comic Con, and the premiere of Sideshow’s Spider-Verse line-up!