During Sideshow’s Online Comic-Con, our friends at Tweeterhead debuted their new DC Supergirl Maquette from their Super Powers collection.  Supergirl is soaring high above a cloud-themed base, dressed in her iconic red and blue sleeved costume that she wore throughout the 1970’s Supergirl series.  The Girl of Steel stands over 16″ tall, and embodies the spirit of hope, help, and compassion for all.

Supergirl Vol. 1 launched in 1972, and took the charismatic Kryptonian on some interesting adventures before its conclusion in 1974.  In honor of this high-flying Supergirl Maquette and her classic costume, let’s take a look at six surprising facts from the Supergirl series in the 70’s! 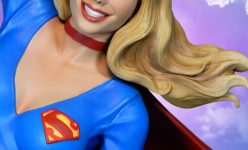 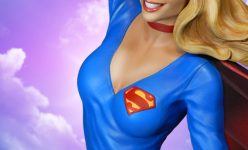 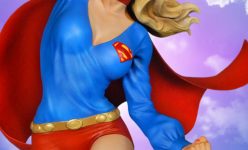 In one issue of her comic series, Supergirl visits the Fortress of Solitude with the ailing Dr. Allan Forsyte, where the pair learn that a Kryptonian scientist named Nor-Kan once devised a cure that can assist the sick doctor.   To retrieve a cure-all formula from Nor-Kan’s tomb, Supergirl and Forsyte shrink to enter the bottle city of Kandor.

After receiving the cure, Dr. Forsyte begins to return to his normal size, so Supergirl has to heat the bottle city and blow the glass into a larger shape to free the growing man.  She then fixes the bottle after freeing the cured doctor and preventing him from accidentally crushing Kandor.

2. Zatanna (and Hawkgirl) starred in the Supergirl back-up stories.

Most of Supergirl’s 10 issues feature a backup story starring Zatanna, and eventually Zatanna teams up with Hawkgirl as well.  These stories involved the magician opening portals to go back in time and searching for her missing father Zatara.

Hawkman and Hawkgirl appeared in a story where Zatanna’s magic had gone awry as she tried to split herself in two.  Zatanna was even featured in the main story of Supergirl Issue #7, The Sinister Snowman, where she and Supergirl fell in love with the same man.

3. Supergirl was cursed by the spirit of Medusa.

While performing the role of Medusa in a play rehearsal, Supergirl is visited by the real spirit of Medusa the gorgon, and is cursed to have hair made of snakes.  The evil spirit hoped to take over Supergirl’s being and take over the world with her powers.

Batman, Green Lantern, and Hawkman all appear to try to help Supergirl, but with her curse she accidentally turns them all to stone.  The ghost of Perseus, legendary hero who slayed Medusa, helps to free Supergirl from the curse and return the petrified heroes to normal.

4. A nationwide paper shortage delayed the conclusion of the series.

Supergirl Vol. 1 ran for 10 issues that published bi-monthly, but there was a big delay between issues #9 and #10 due to a nationwide paper shortage.  During this time, the series was decided to be definitely concluded with its 10th issue and then Supergirl began to appear in The Superman Family comics beginning with Issue #165.

5. Supergirl (sort of) had a twin brother.

Superlad was erased from the multiverse after Crisis on Infinite Earths, but in this initial Supergirl series, an evil geneticist named Dr. Forte managed to steal DNA from Supergirl and clone her.  At first, the prospect of a twin brother intrigued Supergirl, but she soon learns that the clone has no morality and instead commits felonies to benefit Dr. Forte.

In a final confrontation, Dr. Forte orders Superlad to kill Supergirl, but the boy instead sacrifices himself in order for Supergirl to capture the maniacal doctor and bring him to justice.

6. Supergirl is an honorary Amazon.

Hoping to take a break from society for a bit, Supergirl flew to Paradise Island and met Queen Hippolyta of the Amazons.  The Kryptonian saved the queen and Nubia from being attacked by Shark Men, and was awarded the status of honorary Amazon.

They tested her strength and heroism, and it’s no surprise that Supergirl succeeded their trials.  However, she soon felt that the isolation of Paradise Island would prevent her from truly helping the world as a hero, and so she left and returned to the outside world.

The Supergirl Maquette from Tweeterhead captures the super energy and boundless optimism of this beloved Kryptonian heroine.  Kara Zor-El has been on countless adventures since her Action Comics #252 debut, but she always keeps that high-flying spirit that Supergirl is famous for.  Check out this and other incredible DC maquettes from Tweeterhead right HERE. 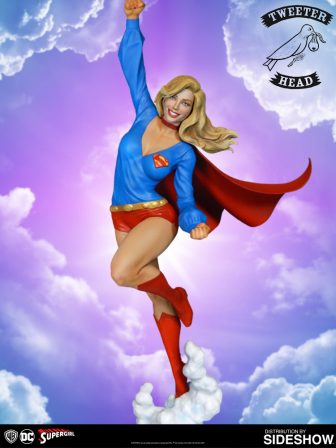 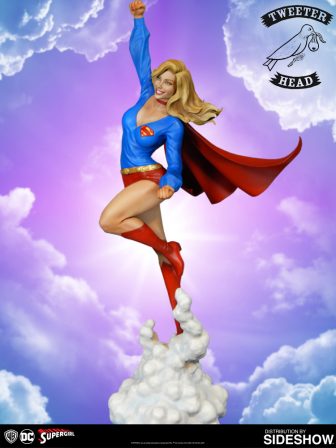 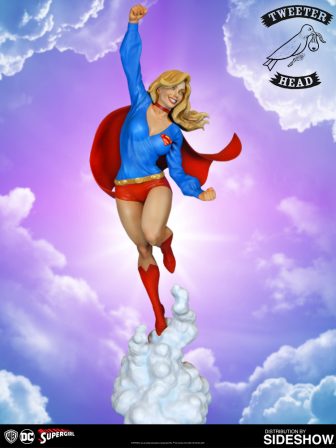 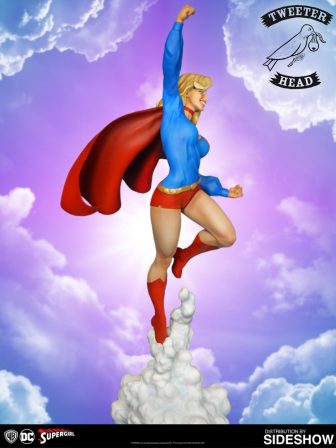 Paint the Town Red: Vampirella Behind the Scenes