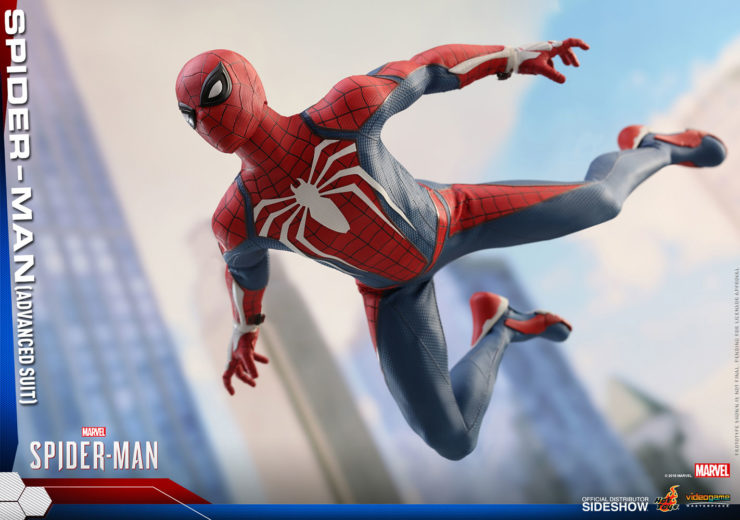 When Marvel’s Spider-Man came out for the PS4, Insomniac wanted to show that this was a brand new universe. After the first big boss fight against Wilson Fisk, Spidey’s original costume was damaged and destroyed. And so, out of necessity, the Spider-Man Advanced Suit was born. The new suit was a collaboration between Peter Parker and Doctor Otto Octavius.

While Insomniac’s design team wanted to take a few risks and modernize the design, they also wanted the suit to be grounded in the Spider-Man designs that everyone already knows and loves. This article will explain the color-coded technology and design decisions that make up the Spider-Man Advanced Suit. 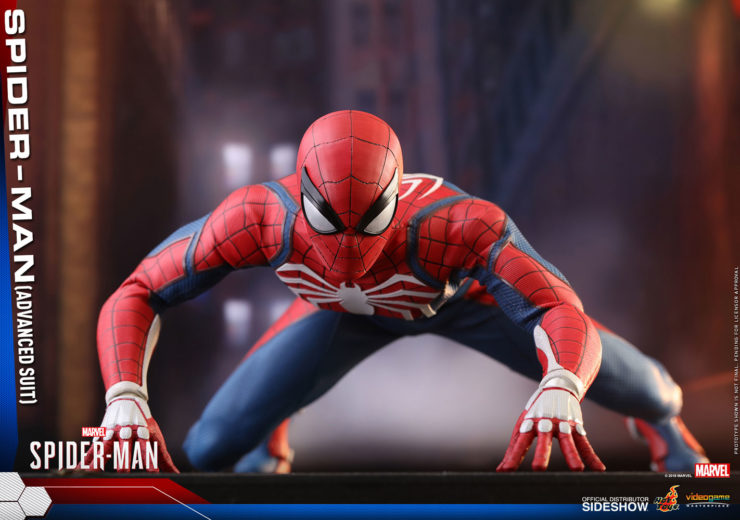 Web patterns have been a constant in all of the classic Spider-Man suits. They start in the middle of the face, like a bullseye between the eyes. With a suit so strategically designed, why would Spider-Man draw a literal target on his face? While there’s no confirmed reason, it’s very likely that it’s an intentional strategy.

If villains shoot right at his face, he can sense the danger with his Spidey-sense then confirm the danger visually. With his heightened reflexes and two senses confirming it, he can dodge any bullet. Every detail of the Spider-Man Advanced Suit forces villains to look in specific places so that Spider-Man can always be sure where his villain will shoot next. 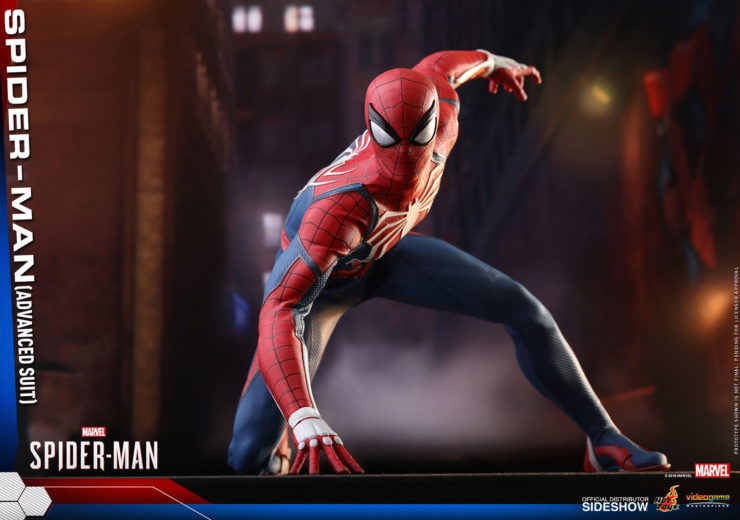 The Spider-Man Advanced Suit actually has color coded materials. The Red material is different than the Blue material or the White material. Each color has a different purpose, strength, and weakness. The Red is a reinforced material, bolstered by the black web that stretches across it. It is also comprised of thicker fabrics capable of taking heavier impacts than traditional spandex. 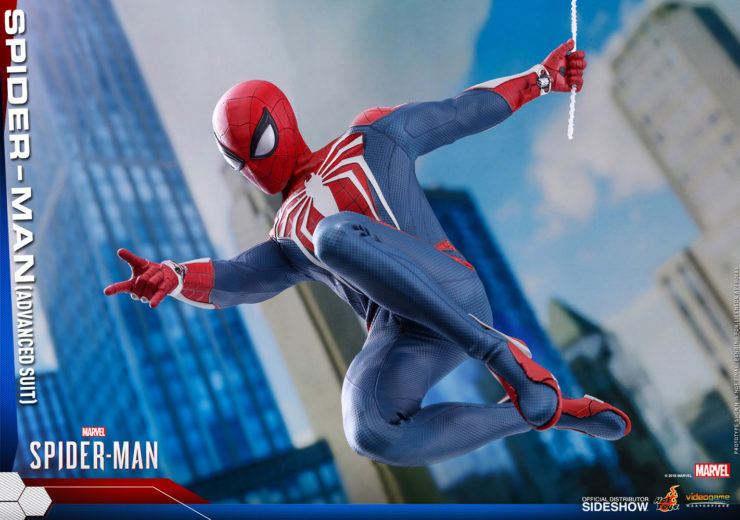 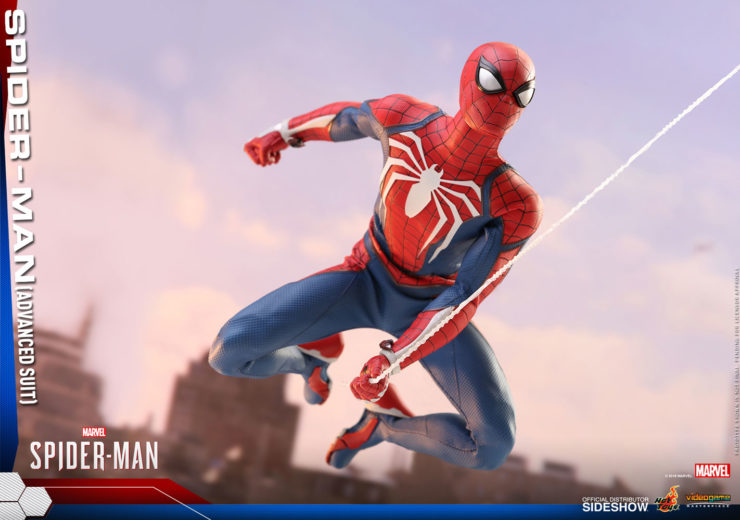 Otto Octavius explains that creating higher points of contrast on the suit will be a huge benefit in battle. It draws the attention of combatants, so that they’re more likely to hit the white than any other part of the suit. Spider-Man’s suit is designed so that the reinforced white material covers his most vulnerable areas, like his heart and hands. The white parts of the suit are special made flexible carbon fiber. It is on his gauntlets so that his every punch in reinforced. The white is also on his chest, to help deflect bullets, in case his Spidey-sense fails him. 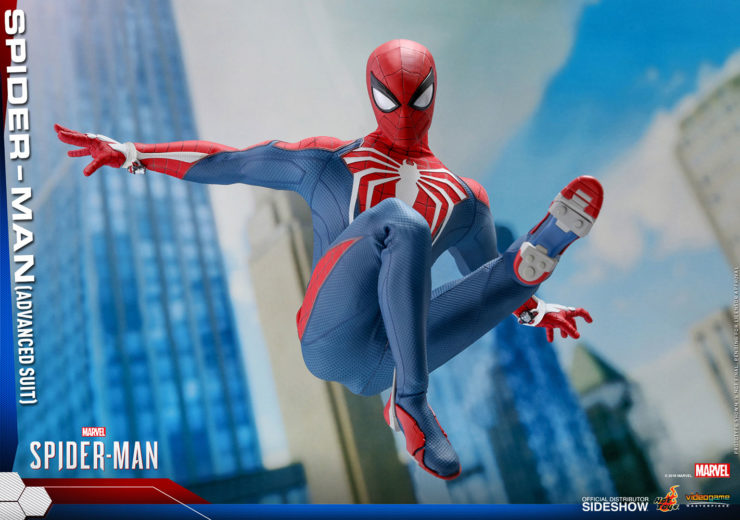 The traditional Spider-Man costume usually has bright red boots, but Insomniac decided to move away from that design and move towards something a bit more fitting for a modern 23 year old Spider-Man. They changed the design to look more like a sports shoe, or a sneaker.

His shoes are also color coded. The white material in his heels and the balls of his feet have much more support and grip when he’s holding back a train from crashing or pulling a helicopter back onto a roof. The blue material surrounds his toes for ideal flexibility. And the red reinforced materials support the side.

Spider-Man will make an incredible addition to your Marvel collectibles. Watch the Spider-Man Advanced Suit in action in Sideshow’s How to be a Poser series!

The Batman Beyond Fine Art Print by Artist Ben Oliver

Matthew Black Artist Profile - Slow Down and Focus On The Positive