“The Alliance, the Rebels, whatever it is you’re calling yourselves these days…all it’s ever brought me is pain” – Jyn Erso

In her journey from recalcitrant lone wolf to selfless hero of the rebellion, the character of Jyn Erso – played by British actress Felicity Jones in Rogue One: A Star Wars Story – captured our hearts and imaginations and brought another strong female lead to the rich and diverse Star Wars Universe. 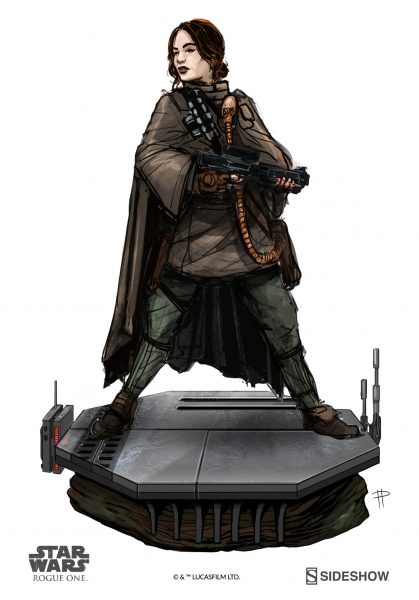 Raised from a young age by militant insurgent Saw Gerrera, Jyn’s already deep-seated hatred of the Empire was fueled by Gerrera’s radical ideology. Living and training with his militia on Onderon she became experienced and battle-hardened, skilled in the use of weapons and hand-to-hand combat. But, an unforeseen turn of events left Jyn abandoned by Saw and left to fend for herself, still only a teenager, she found herself all alone in a hostile galaxy under a crushing Imperial regime. Feeling betrayed by Gerrara and his “rebels” Jyn focused solely on her own survival, caring little about politics or ideals…

Sideshow’s new Premium Format™ Figure portrays Jyn both at a pivotal moment in her life and at a crucial point in the story of the Rebel Alliance. Rescued from an Imperial Labor Camp on Wobani, and dragged reluctantly back into a rebellion she doesn’t trust, Jyn confronted Saw Gerrera, and discovered shocking news about her long-lost Father, Galen. Now, travelling to planet Eadu she is heading toward unknown peril and heartbreak. Forced to face a past she has been running from for much of her life and an enemy far more dangerous than she could ever imagine. 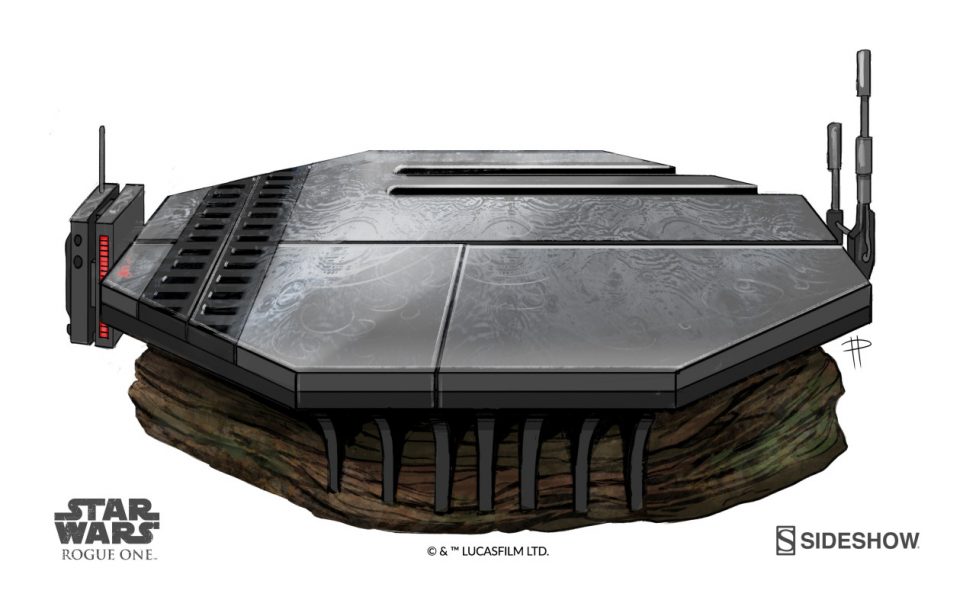 As lifelong Star Wars fans and proud collectors, this was a passion project for our team here at Sideshow.

Project Manager, Kevin Ellis said:“This exact moment in time, it was what we wanted to capture from the very beginning. Her look, her wardrobe, it was something that appealed to me and my team from the outset. The detail, the textures, they were just so perfect for our Premium Format™ platform. I knew our team could make something exceptional.”

Of course working so far in advance on a project was not without its perks as well as its difficulties. Kevin added: “We had been working on this figure for over a year before the movie came out! We work under the strictest security, with a small group of us creating concept art based on the most top secret documents. It’s kinda like me and my team has the plans to the Death Star here! It’s a huge responsibility, sort of a blessing and a curse. I’m a Star Wars fan, and my job is basically all spoilers! (laughs)”

“Zachariah, Matt, and Will did an amazing job creating a super realistic representation of Felicity Jones as Jyn Erso. She looked awesome, but it was a challenge creating something based solely on reference material without the full context of the movie to help us put all the puzzle pieces together and bring her to life. Lucasfilm are great to work with, but as you can imagine they can’t always share key plot points. They provide huge amounts of top-secret reference material to help us make the likeness totally authentic and screen-accurate, but the pose and the expression, those nuances of the character – they proved to be difficult, as no one had seen the movie! In the end, the trailers were a big source of inspiration. They helped us get a sense of Jyn Erso’s attitude. There’s no easy way to do that. That’s an art in itself. Our team rose to the challenge and really captured the actress, the scene and the character.” 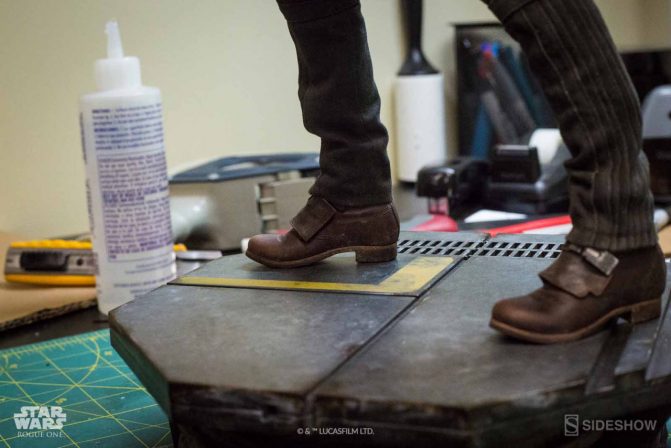 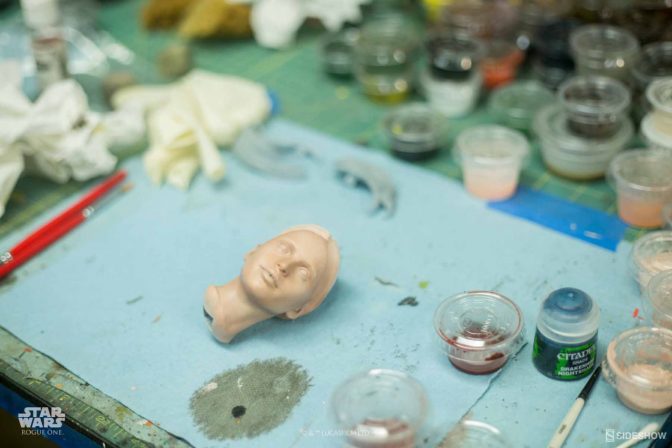 “From the very start I knew I had to use Esther for this project. This piece called for so many different textures and layers of tailored fabric. She was the only choice for me! Her skill, her attention to detail, I knew she could knock it out of the park”.

Costumer, Esther Skadunas said: “I always try to get as much reference as possible, and once I have those images to work from, I can go into detective mode!  I examine all reference very carefully, noting how the piece is put on, where the closures are, finding all of the stich lines and whether they are there for function, or for decoration. Once I feel confident with my research and the information I’ve gathered, I begin pattern-making and creating prototypes. Her belt, her oxygen pack, I love tiny items like accessories, so it was fun finding materials that look correct and believable in this specific scale. The piece that seemed most time consuming was Jyn’s Concho. There is an amazing amount of detail involved in that item, mostly in the form of high detail stitch lines. I also had to hand-dye about 95% of Jyn’s fabrics, including all of her accessory materials to get the correct colors. Seeing Jyn come together as a final piece was very exciting.  To see her clothing and accessories on an amazing sculpt, and seeing her come to life with masterful paint…..she truly is a work of art!” 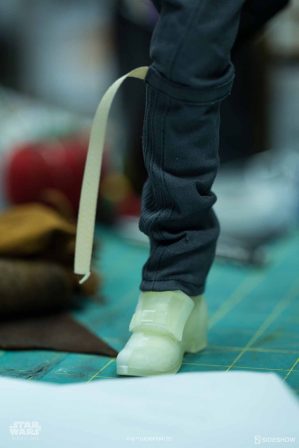 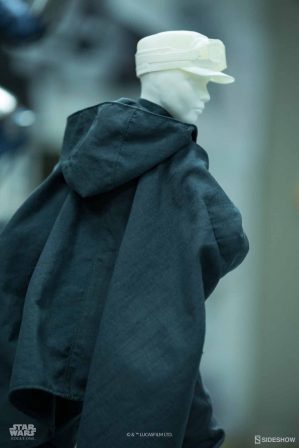 Kevin Ellis said: “Lucasfilm provide us with so much help, guidance and reference. Our crew loves that, and Chie and Kat really brought so much of their skill to the textures and colors of this piece. Every single element is aged and weathered and worn. Everything is totally and utterly accurate and authentic. It’s awesome.”

Painter, Kat Sapene said: “Felicity Jones’s face was a really fun challenge to paint. She looks great, and her makeup was amazing and I really wanted to capture that, but we also wanted her to look like she was in this dark, wet environment.  Still beautiful, but a little disheveled y’know? (laughs) That rain actually played a big part. We wanted all those fabric elements to look wet too. That took a lot of work with lots of little touches. For example, I did things like adding dark part-glossy washes to the bottom of her pants, making them seem waterlogged…” 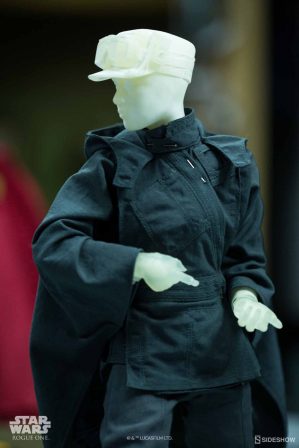 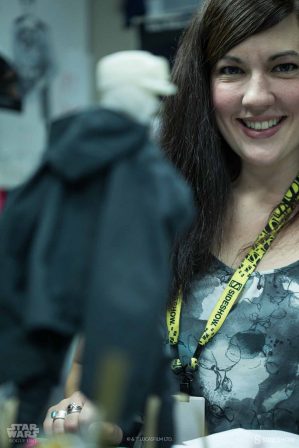 Painter, Chie Izuma added: “I was doing similar things with the base platform. I wanted to add a lot of interest. Not just a slab of concrete. I added lots of different washes, adding gloss to create a puddling effect in corners and crevices. Remember, we’re working a year ahead of the movie, so at that time we knew very little about the environment or the planet she was on, so we worked hard to create some detail and visual appeal to what’s basically just a rock-and-concrete structure.  For example, if you look really closely you can see I added some purple washes in the shadows. There are lots of hidden colors and subtle things going on in there! Tom Gilliland came in and provided his personal touches to the edges of the broken structure. He has his own way of laying down highlights which gives these cool greasy rubbed-down textures. He made those bits look aged and worn and damaged. Kevin also suggested adding those yellow elements, it’s only a small detail, but they helped break up the base even further and make it less uniform. They add to the impression that it’s part of a much larger structure.”

Kat said: “There are so many things like that. Every time you look at this Premium Format™ Figure you see something new. Every buckle and button was sculpted and then hand painted. There’s so much that you miss at first glance, then you find yourself going back for another look. Like, did you know one of Jyn’s shoes is way darker than the other one? Really! (laughs) Those super-accurate details make such a difference! They make this piece special.” 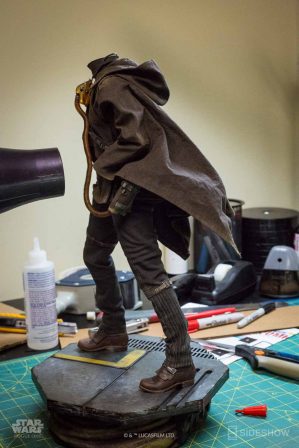 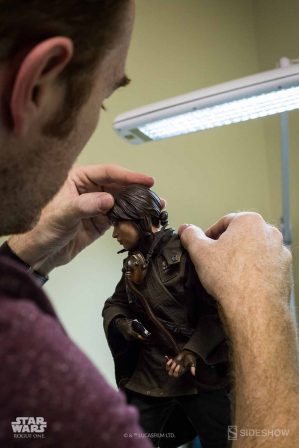 When it became time for the Sideshow employees to finally see Rogue One: A Star Wars Story on the big screen, the team was both excited and nervous.

Kevin said: “The whole company shut down for the afternoon. We took over an entire movie theater and went to see Rogue One as one big family! This was an awesome experience for us as Star Wars fans, but for me and my team it was the culmination of hundreds of hours of work. We finally got to see Jyn Erso on screen, in that particular scene, wearing those clothes; it’s a big deal for us! Right then I wasn’t even following the story, I was just soaking in every detail, making mental notes and making sure we hadn’t screwed up! (laughs) But she was perfect. Everything was perfect! We chose such a pivotal scene, it was so dark and so cool, and Felicity Jones was just amazing. We created something different to any other Jyn Erso figure out there. The detail, the attitude, everything – It’s an incredible piece. Seeing that character on the big screen and knowing what we had accomplished together matched the movie so perfectly. I am so proud of my team. They crushed it!” 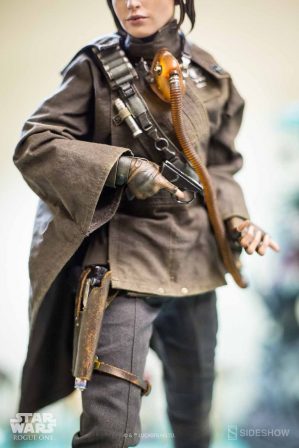 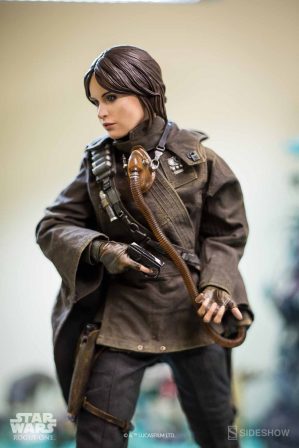 Without a doubt, our Jyn Erso Premium Format™ Figure has been a labor of love for everyone that has been involved in the project here at Sideshow.  Our team’s passion for the character and dedication to detail, authenticity and movie accuracy can be seen in every stage of the process.

We have been thrilled by our fan’s reaction to the piece, and we hope that you enjoyed seeing these behind the scenes images as much as we did bringing Jyn Erso, hero of the Rebellion to life in our flagship Premium Format™!

The Jyn Erso Premium Format™ Figure will be priced at $499.99 and is available for pre-order now.