Since her first appearance in Journey into Mystery #84 (1962), Jane Foster has gone from humble beginnings as a nurse to becoming a hero in her own right. Across comic books, cartoons, and films, she has played many different roles in the expansive Marvel universe, and her path always crosses with Thor when she least expects it.

Whether she’s studying the stars in the Cinematic Universe or protecting the Ten Realms, she always somehow finds her way into the action. Brush up those résumés, because today we’re taking a look at the many jobs of Jane Foster! 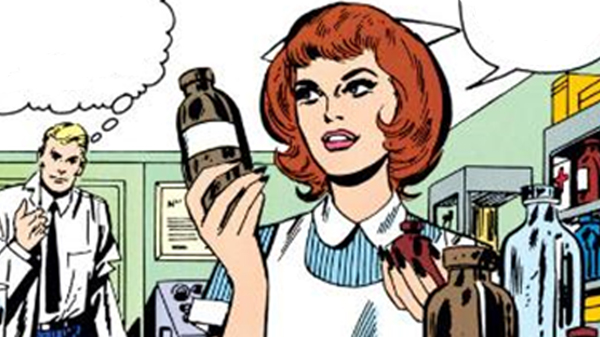 Jane made her debut in comics as a nurse for Dr. Donald Blake, formerly* the mortal form of the disgraced Thor Odinson. She eventually fell in love with both her boss and with the hero Thor, not knowing they were the same man until the Avenger revealed his true identity to her. Odin did not approve of his son’s relationship with the mortal woman, so he wiped her memories and sent her to work as a nurse for Dr. Keith Kincaid, who looked a lot like Donald Blake.

Eventually she became a full physician, known in her practice as Dr. Jane Foster. Here, she sometimes tended to her visiting Asgardian allies, like Sif, and worked as a medic on the anti-registration side of Marvel’s first Super Hero Civil War. The cartoon series Earth’s Mightiest Heroes changed it up when they made Jane Foster a paramedic who responded to the damage and disaster caused from the battles fought by the Avengers.

(*See Thor: Prey by Donny Cates and Nic Klein for the most recent revelations behind the dual nature of Donald Blake and Thor Odinson and how Jane Foster fits in to it all.) 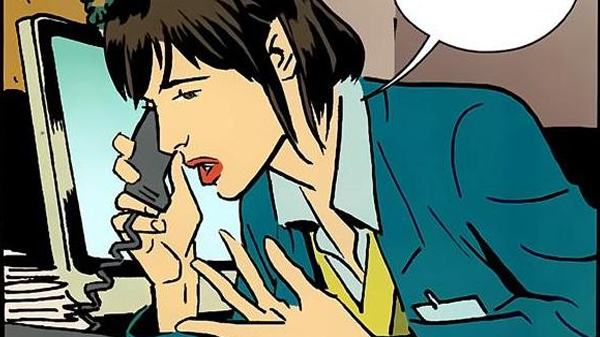 In the non-continuity series Thor: The Mighty Avenger by Roger Langridge and Chris Samnee, Jane Foster worked as a museum coordinator at the Bergen War Memorial Museum. As the head of the Nordic Antiquities Department, she was responsible for maintaining the exhibit that eventually drew in a lost, forlorn Thor who was in search of his enchanted hammer Mjolnir. Against her better judgment, she helped the mysterious man access a restricted cabinet that contained an ancient urn which hid his hammer inside.

After he proved that he really was an exiled Norse god, Thor came to live with Jane. Later, a chaotic showdown at the museum between Mr. Hyde and the Asgardian caused damage to some of the exhibits, and Jane was temporarily suspended from her museum job. This left her with more time to accompany Thor on his adventures, where she met other heroes like Namor, the Wasp, and Ant-Man. 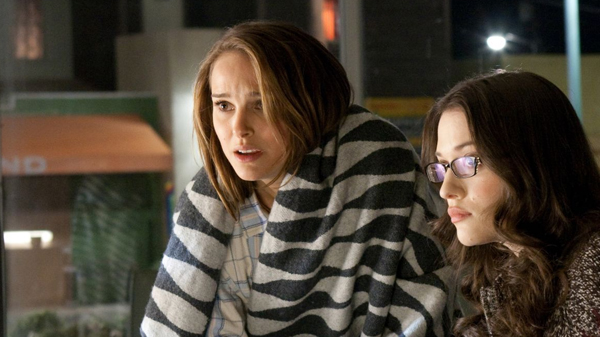 In the Marvel Cinematic Universe, Jane Foster keeps her doctor title, but is not a doctor of medicine. In fact, she accidentally sends Thor to the hospital with multiple hits from her kitted-out van. Played by Natalie Portman, Dr. Jane Foster from the films works as an astrophysicist studying Einstein-Rosen bridges, or wormholes. Her field season takes her to the deserts of New Mexico just in time to encounter the banished Thor, whose hammer has caused a massive crater near the fictional city of Puente Antiguo.

In the first two films, Jane continues her interstellar research, inspired to know that her theories about the universe are correct based on Thor’s explanations of Asgardian technology. Eventually, she gets caught between worlds during the Convergence, when all the realms aligned over Greenwich in London. The MCU Jane Foster has also been the living host for the Aether, which was revealed as one of the six Infinity Stones. Absent from Thor: Ragnarok, she is poised to return for Thor: Love and Thunder in an even more heroic role. 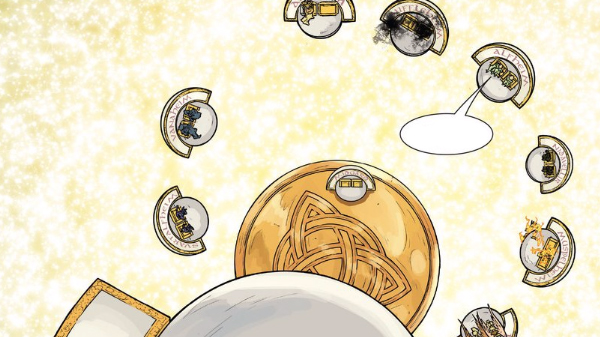 In Jason Aaron and Esad Ribić’s Thor: God of Thunder, it was revealed that Jane Foster had been diagnosed with breast cancer. Thor Odinson found her living in Broxton, Oklahoma, where she was beginning chemotherapy treatments and taking a break from her medical profession. He offered her use of any of Asgard’s magical healers, but Jane, a firm believer in Earth medicine, refused any mystic cures for her condition. The Avenger was reluctant to let her leave his sight, and so he offered her a position on Asgard’s Congress of Worlds, a galactic senate with representatives from all the realms.

While the job of a galactic senator sounds more like something from Star Wars™ (like Padmé Amidala™, also played by Natalie Portman!), it also functions like the Council of Elrond from Lord of the Rings. Jane, along with Volstagg the Voluminous, represents the whole of Midgard in meetings with otherworldly beings like Dark Elves, dwarves, and fire demons who don’t take the human woman very seriously. And for quite a few issues, she missed some meetings while busy being … 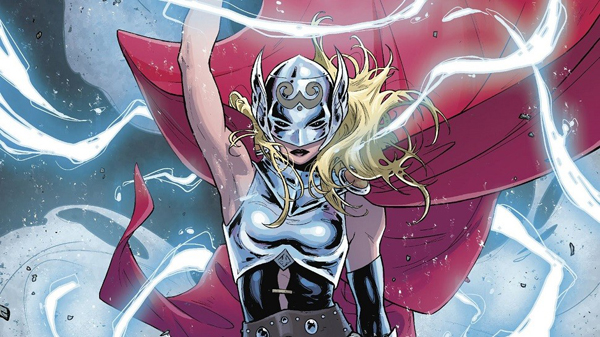 Because there must always be a Thor, Jane Foster found herself worthy of Mjolnir’s might after Asgard’s prince was mysteriously unable to lift his enchanted weapon. Called by the hammer’s strange inner voice, a storm named the Mother of Thunder, the sickly mortal woman was granted all the powers of the former Thor, including strength, flight, and control of lightning. Jane recognized this enormous responsibility and took to defending all the realms from the opportunistic villains who rose up in Odinson’s absence.

As the new Goddess of Thunder, Jane Foster contended with Frost Giant hordes lead by the evil sorcerer Malekith the Accursed, the evil oil syndicate Roxxon and its monstrous CEO, and even Odin the All-Father. The new Thor was unwelcome on Asgard, so Jane had to carefully guard her identity from even her allies like the Warriors Three, all while watching Prince Odinson struggle with his unworthiness and trying to find time for her chemotherapy treatments.

Eventually, it was revealed that her transformations were in fact killing her — the act of transforming into a goddess expunged all the treatment drugs from her body. Jane took a final stand against Mangog when she threw the beast into the sun, anchored to Mjolnir. Ultimately the act of becoming Jane Foster finally killed her weakened body, until Thor Odinson used all the thunder he could possibly possess to bring her back to life. Not ready to accept her seat in Valhalla, Jane returned to the world of the living. She then promised to address her cancer without any heroics interrupting treatment. 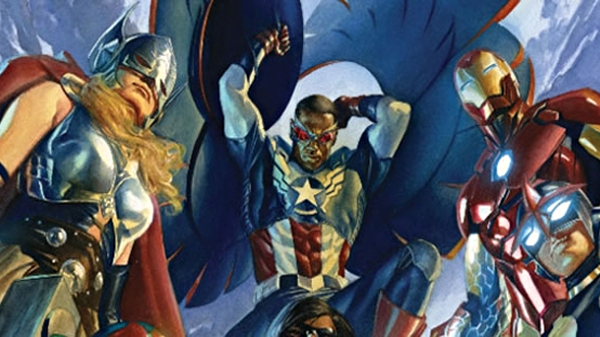 Another entry on Jane Foster’s list of heroic employment is that coveted role most Marvel heroes aspire to: the title of Avenger. As a part of the All New, All Different Marvel initiative, Jane Foster joined the Avengers as Thor, working alongside other legacy heroes like Sam Wilson as the new Captain America and Kamala Khan as the new Ms. Marvel. As a team, they battled the insidious time traveler Kang, and a battlefield mishap forced Jane to reveal her identity to Sam Wilson, who promised to keep her secret. (They even dated very briefly!)

After Tony Stark disappeared and the younger teammates quit to form the Champions, Jane stayed on with Vision and Captain America to continue the Avengers team with Hercules, Spider-Man, and the new Wasp. The Mighty Thor was definitely a team player, even if she had to keep her true self hidden from most of her team. Finally, when war broke out across the Ten Realms of the cosmos and the Goddess of Thunder was a fugitive from the All-Father and his evil brother, Jane’s Avengers tenure got cut slightly short. (But she has since returned to assist the newest iteration of the team as Valkyrie — more on that below!) 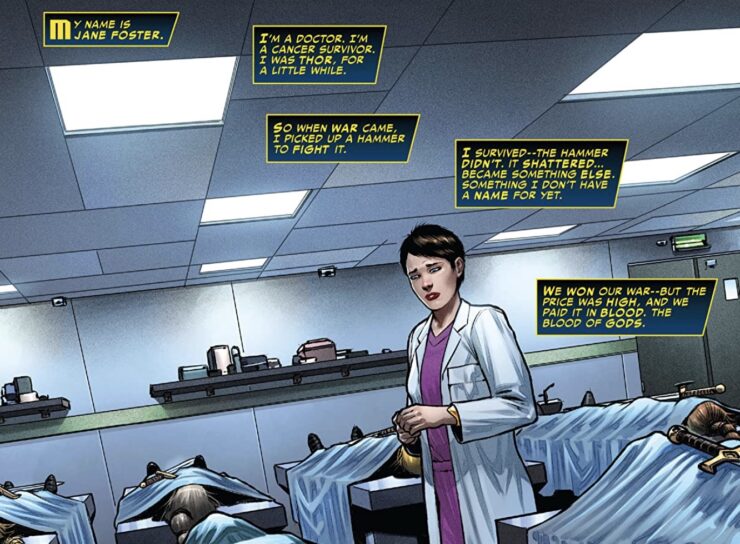 After her cancer was declared in remission and Jane was no longer active as The Mighty Thor, she went back to her career at the McCarthy Medical Institute. However, the hospital’s administrator Dr. Hagen noted Jane’s numerous excuses and absences from her own treatments at the Maria Wheelock Cancer Center (named for a fan’s own late mother who had passed from cancer). She was deemed unreliable to her colleagues. As a result, Jane was transferred from her typical ward to the hospital’s morgue as an assistant to Dr. Rudy Gillespie.

Though Jane couldn’t reveal the truth behind her many missed chemotherapy treatments, she dutifully accepted the transfer despite the embarrassment at the lack of trust she was afforded as a doctor. Here, she also kept in touch with Lisa Halloran — the women bonded over being medical professionals who have dated super heroes (Lisa dated America Chavez briefly). Jane also regularly frequented the Remains of the Day bar for other morgue workers in New York City. But her work with death didn’t end here … 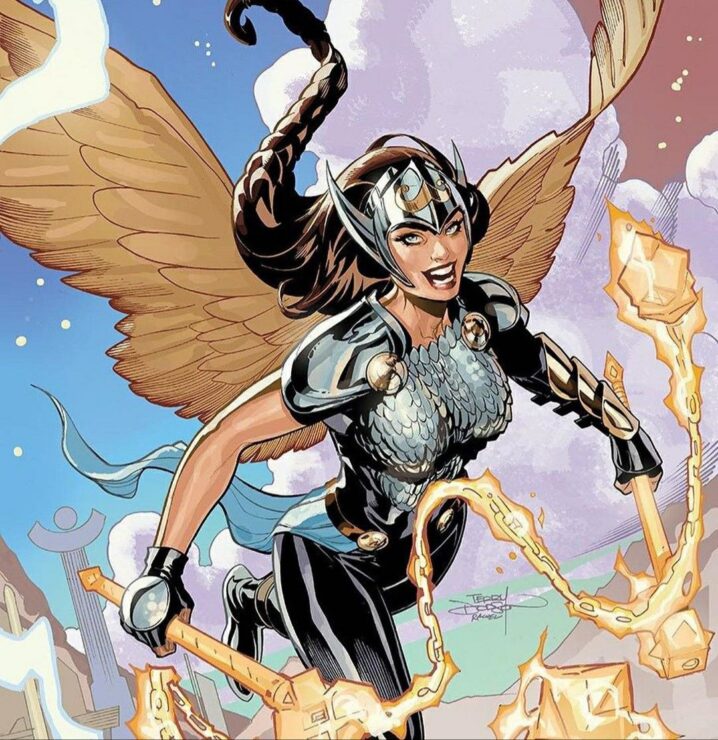 During the War of the Realms, Jane was asked to fight back against Malekith one final time. In the initial assault on Midgard, the last realm standing, the Dark Elf warlord slaughtered every active valkyrie, including the leader Brunnhilde. This meant there was no one to ferry dead souls to their eternal reward. As a result, Asgard’s ability to aid the Avengers was severely diminished, but the Mjolnir from the Ultimates universe (Earth-1610) had recently found its way into this reality during Secret Wars. Now, there were more hammers to go around.

Eventually, Jane agreed to take this Mjolnir for one last stand and not lose herself entirely to the life of The Mighty Thor once more.Plus, at the end of the battle with Malekith, the hammer’s energy had been entirely expended. The Ultimate Mjolnir shattered, but then its essence drew it back together as a golden, amorphous form around Jane Foster’s arm — it was now Undrjarn, the All-Weapon.

After the war subsided, the dead valkyries were brought to Jane’s morgue and the soul of Brunnhilde asked her to continue their work. As a morgue doctor’s assistant, she was perfectly primed to become one of the godly warriors tasked with escorting souls to the afterlife. The All-Weapon enables Jane to fight unseen threats with whatever tool she can dream up, and her death-sense now enables her to see the possibility of death hanging over anyone’s head — visualized as a purple, skull-faced aura that grows bigger the closer someone is to dying. Her compassion, strength, and intimate understanding of death have all helped her to become an incredible warrior once more.

Some jobs are thankless, like those that require business trips to warring elven homelands to save a queen in crisis — but that’s all in a day’s work for Jane Foster the scientist, doctor, Thor extraordinaire. No matter what her office looks like or what her job title says, Jane has always worked to protect those in need and help others understand the world around them. That’s a bit of a tall order in the Marvel universe, but she has plenty of heroic experience. And with Mjolnir in her tools of the trade, Jane Foster is sure to nail her next job interview!

Are you excited to see Jane’s latest promotion to Mighty Thor in Thor: Love and Thunder? Keep the conversation going in our official Facebook group by visiting side.show/geekgroup. And as always, don’t forget to Let Your Geek Sideshow!