Welcome back to Sideshow’s Official Guide to the World of Mythical Creatures and Monsters! We hope you found the first entry in our guide detailing the facts and fiction of the Majestic Mermaid very informative, and that it helped you safely navigate the wily oceans of the globe without falling prey to the siren’s seductive love song.

In this entry, we will return to dry land and explore the flourishing forest and lush foliage that may not be very far from your own backyard. Areas such as these can be the home to our next creature of folklore, the fairy.

Take Tinkerbell, for example; this famous fairy has quite the story behind her, as do many of her magical fellows. 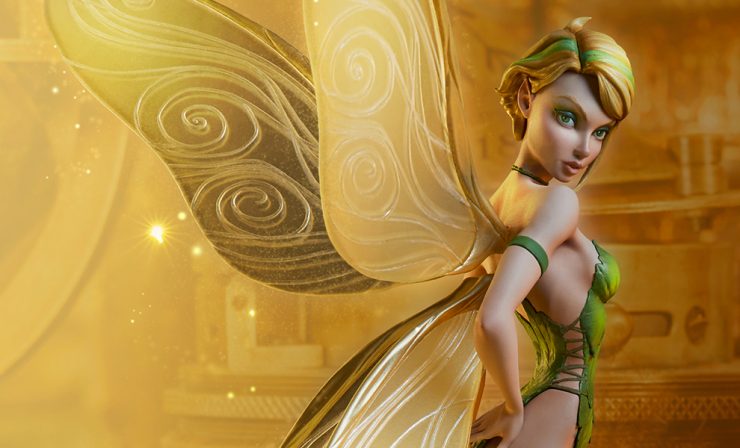 Before we can discuss the history of fairies, we first need to define what exactly a fairy is. This could be a problematic, as the classification of fairies has changed dramatically over the years. In olden times, the word “fairy,” was a term used for any supernatural creature with mystical abilities. This includes not only the small winged sprites and pixies we immediately picture in our minds, but also more horrific creatures like goblins and changelings. It wasn’t until much later that the term “fairy” was narrowed to the more specific type of creature we commonly picture today.

The current idea of what fairies are comes mostly from old English tales passed down through generations.  This conception became increasingly popular with each subsequent story. The now traditional fairy has made appearances in everything from classical art and literature, to Shakespeare’s theatrical presentations, to film, and modern day video games.

But it is all fiction and folklore, right?

Maybe not. As they say, all tales have some basis in reality. There have been reports of fairy sightings all over the world, with many well-known and respected people who claim to have had an experience with the small mysterious creatures.

The characteristics of a particular fairy, pixie, or sprite will vary based on the region and habitat in which they dwell. With such a large gamut to choose from, for the sake of clarity, this guide will stick with the most common type: the forest fairy or pixie.

These small, delicate creatures usually span in height from four inches to twelve inches tall. They generally resemble an attractive, albeit small, human in appearance. However, some may still have frightening characteristics (sharp teeth, claws, etc.) that more closely resemble their goblin and changeling cousins.

Often they are shown to have wings that resemble those of large insects or butterflies, but there are also many types of fairies that lack this defining characteristic. Skin tones and hair can range in hue, running the scale from pale porcelain white to shades of green and dark brown.

All fairies are naturally mystical in nature – however, forest pixies, in particular, emit a faint glow or aura around their bodies, and can often be mistaken for large fireflies from far away. They also create natural fairy dust, which in and of itself is rumored to have many magical properties and is coveted by humans.

If that wasn’t enough, there are also tales of beautiful Fairy Kings and Queens that rule over the smaller fae and are much closer in size to an average human.

While these creatures are thought to reside in the lush woods, foliage, and caves of the wilderness, this is likely not their point of origin. It is simply where humans tend to encounter them the most, which in turn caused an assumption that this is also where they must dwell.  Untrue.

More likely is the existence of a, for lack of a better term, Fairyland. Unconfirmed reports claim this world between worlds is where the pixies retreat to in the evenings, and is likely ruled over by the aforementioned King and Queen of the fae. Sadly, humans cannot enter this realm, and because of this, not much is known of this otherworldly land beside unsubstantiated reports and hearsay.

Aside from the creation of the aforementioned fairy or pixie dust, the fae have a tremendous range of abilities. In fact, being one of the most magical of creatures, it might be easier to list the powers that fairies don’t posses.

Many, by nature, are tricksters and love to play pranks on unsuspecting humans. They do this by utilizing mesmerization or telepathy to cloud minds, cause brief infatuations, or hallucinations. Some even have the ability to shapeshift, capable of disguising themselves as vegetation or an animal.

Despite their small size, the fae are very strong and durable. It would take quite a bit of effort for a human to do harm to one of their kind. They are also extremely long-lived, and could possibly be immortal. However, there is a rumor that a particular phrase spoken by a human could kill a fairy in an instant.

Finally, while not all fairies have wings, this doesn’t keep them from getting around quickly. Fairies without wings travel via magical teleportation or by riding on enchanted animals.

If you happen to come across a fairy in the wild, it may seem friendly enough. Just be very careful and keep the above information in the back of your mind. The last thing you want is to fall victim to one of their pranks. You could end up falling in love with a large boulder or waking up with the face of a donkey. No amount of pixie dust is worth that humiliation.

Looking for your own fairy to take home without risk of transfiguration? Pre-order the Tinkerbell Statue from J. Scott Campbell’s Fairytale Fantasies collection today!