Everything We Learned in the Thor: Love and Thunder Trailer

After what has felt like an eternity waiting, we finally have a teaser for Marvel Studios’ Thor: Love and Thunder! Cue thunderous applause. The sequel to Thor: Ragnarok, also directed by Taika Waititi, will premiere in theaters in July 2022.

With only a few months before the movie arrives, the Thor teaser trailer gives fans a glimpse of many highly anticipated aspects of the next Thor film. Yeah, you know what we’re talking about — Jane Foster’s Mighty Thor! Take a look at the teaser below and then let’s dive into all the details we know and what they might mean for this next Phase 4 installment in Thor’s journey.

When we last saw Thor Odinson in Avengers: Endgame, he had a rough go of it. Against Thanos, Thor encountered the bitter taste of failure. He let his team down, he let the universe down, but most of all, he let himself down. While Thor and the other Avengers eventually saved the universe, Thor still remembers what that defeat felt like.

At the beginning of the trailer, a young Thor runs though the woods and shifts from a child to a man, indicating the hero will be going on a very personal journey. A brief training montage with Guns N’ Roses’ “Sweet Child O’ Mine” shows Thor getting back into shape. He says his hands are now tools of peace and he wants to live in the moment. For the first time, Thor can walk his own path, free from the constraints of being a super hero. Well, sorta free.

An Avenger is never too far from something that needs to be avenged. Thor is accompanied for much of the teaser by the Guardians of the Galaxy — Star-Lord, Nebula, Mantis, Drax, Rocket, and Groot, though notably no Gamora. Peter Quill gives some guidance to Thor as the god of thunder continues to navigate his journey of self discovery.

Back in New Asgard, King Valkyrie is seen presiding over some bureaucratic situations. To her left is Miek, who is also wearing an official-looking outfit. Judging by the look on Valkyrie’s face, she is already bored with her new leadership position. You can take the warrior out of the war, but you can’t take the war out of the warrior.

As mentioned previously, Thor travels from world to world as he pieces together the fight looming on the horizon. He even visits the Olympians, where we get a glimpse of Zeus, the Greek god of thunder and an equal (of sorts) to Thor. It’s hard to say whether these two gods of thunder will meet each other with open arms or if a tense rivalry might arise. Once upon a time, Thor was a bit full of himself and it could be that Zeus needs to be knocked down a cloud or two.

On the other hand, the gods could be rallying together in the face of a new enemy. Marvel is now officially bringing in other mythological pantheons, expanding its MCU roster from Norse mythology to include Greek and Egyptian figures (both real and fictional). With the appearance of all-powerful gods such as Khonshu in Moon Knight and now Zeus, plus the Celestials of Eternals, MCU lore is about to take an epic turn.

Where is Gorr the God Butcher?

Another friend also returns in Thor: Love and Thunder, and it is none other than Korg! Thor and Korg first met on The Grandmaster’s gladiator planet of Sakaar. It appears that Korg and Thor might return to Sakaar together as well as visit the corpse of Falligar, a god acquaintance of Thor’s. Something dangerous is brewing among the gods across the universe, no doubt an allusion to Gorr the God Butcher. While we don’t see the villain’s face in this trailer, his handiwork is already on display. 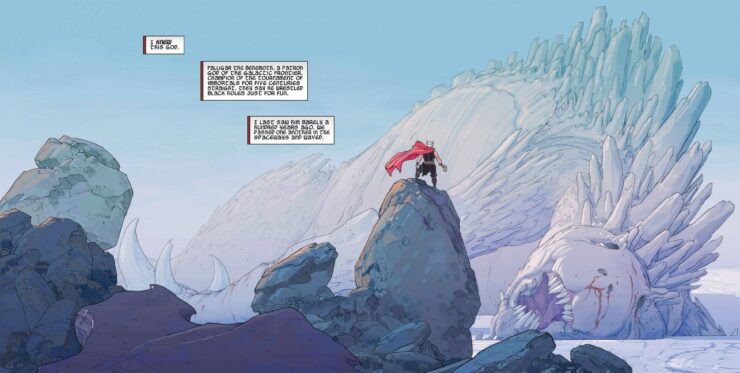 Thor: Love and Thunder‘s plot will take inspiration from Jason Aaron’s Mighty Thor. In these books, Gorr the God Butcher is a primary antagonist. Though the trailer only hints at his presence, this villain proves to be a worthy match for Thor. As an inhabitant of a barren and cruel planet, Gorr lost faith in the gods when he lost his family. He vowed to kill all gods as retribution for their lack of protection, and his anger led him to wield All-Black the Necrosword — a weapon forged by Knull, who also created the alien symbiotes associated with Venom and Carnage.

In Aaron’s critically acclaimed comics series, Jane Foster takes up the title of Thor. Throughout the teaser, we see Thor wielding Stormbreaker. After Hela’s destruction of Mjolnir in Ragnarok, Thor had to seek Eitri’s help in Avengers: Infinity War to construct a new replacement, which he named Stormbreaker. However, to Thor’s great surprise during the teaser’s last few seconds, Mjolnir whips through the air. The majestic hammer, still sporting more than a few cracks thanks to Hela, is summoned to the iron grip of Jane Foster!

Our first look at Mighty Thor features all the character’s well-known traits — the muscled arms, flowing red cape, and of course the winged helmet with metallic eye shield. Her appearance will surely further complicate Thor’s discovery of his new identity as Jane develops her own heroic persona.

While the teaser didn’t reveal much about Gorr the God-Butcher, we have gotten a preview of what the villain will look like with official merchandise reveals from Marvel. Plus, the Thor teaser has given us our first look at Jane Foster as Mighty Thor and a post-Snap, post-Endgame Thor on the road to discovering himself. The forecast is anything but clear, yet we’re excited to see what happens in Thor: Love and Thunder this summer!

What are you most looking forward to in Thor: Love and Thunder? Let us know in the comments and don’t forget to Let Your Geek Sideshow!