Today is the most thunderous of Thorsdays that ever was- it’s Chris Hemsworth’s birthday! 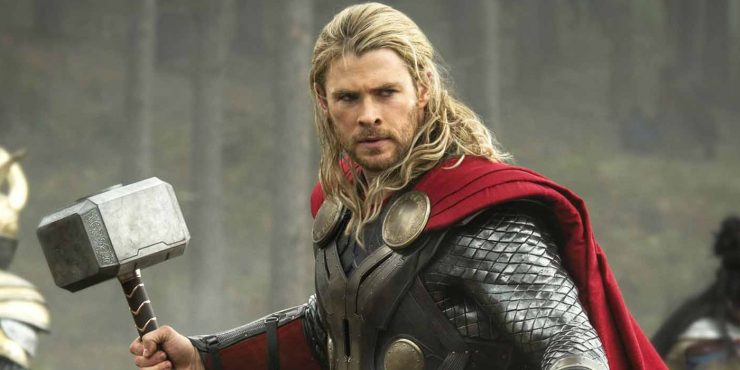 As you may well know, Chris Hemsworth is the awesome Australian actor behind the Asgardian Avenger’s appearances on screen. He happens to turn 33 years old today, which is a Thursday- so named after Thor, the God of Thunder. Is it fate that he was chosen to valiantly hold the hammer for Marvel’s Cinematic Universe? He certainly is worthy- just look at his last name!

To celebrate this epic Thorsday and birthday, let’s look at all the epic fun that Chris Hemsworth has brought to his legendary role as Thor in the Marvel movies.

Thor and Loki are one of the most famous sibling duos in the Marvel Universe. Being the older brother, Thor usually has to be responsible for Loki’s mischief and destruction, but sometimes the brothers stop butting heads long enough to work together.

Chris Hemsworth is no stranger to having brothers, being the middle child of three- older brother Luke and younger brother Liam round out the trio. The three are all actors, and none of them are vying for the throne of Asgard, so you can imagine their relationship is less contentious than the gods of thunder and mischief. Still, Chris Hemsworth knows the bond of brotherhood is an important one, and you can see that in the way Thor interacts with Loki in the films.

Asgard and Australia, Hemsworth’s homeland, both seem like far off worlds filled with terrifying creatures and men built like warriors. Thor is no stranger to slaying frost giants and wrestling Bilgesnipe, but does he take selfies with spiders as big as his face?

Chris Hemsworth seems to be at one with the nature of his native Australia, capturing funny moments with kangaroos, huge snakes, and tarantulas on his Instagram page. Australia is known for its outrageous wildlife and here, Hemsworth is apparently right at home. Asgard and outer space feature threats like the Chitauri, Dark Elves, and stone men from Saturn. I think I’d take seeing a frost giant over a giant spider any day, though.

While Thor often appears to be stoic and serious because of his imposing figure and Asgardian accent, Chris Hemsworth’s performance as Thor is a lot funnier than some give him credit for. The actor certainly has comedic chops- showcased outside of the MCU in films like Ghostbusters (2016) and Cabin in the Woods (2012).

While a man as large and imposing as Hemsworth might be given more physical comedy with his hammer, a lot of the humor lies in the timing and delivery of his lines. A previous Thorsday feature focused on some of his most memorable quips and quotes, including such fan favorites as his quick, “He’s adopted” over Loki. So much for that bond of brotherhood, huh?

Chris Hemsworth is an incredibly talented actor, and his variety of work and appearances speak to the depth of his skills. He utilizes his skills in humor and seriousness in perfect balance when bringing Thor to life on screen. Plus, he looks good swinging that hammer!

He’ll be back for Thor: Ragnarok and Avengers: Infinity War, and we just can’t wait to see the thunderer return to the screen for more action. But for today, we celebrate Hemsworth’s special Thorsday birthday and wish the Asgardian Avenger many happy returns!